How can the marriage of red and blue create such exotic mystery? Color psychology suggests that colors can influence our moods, and one of the most evocative of all colors is purple. Because the color purple is relatively rare in nature, many people see purple as an especially exotic or extravagant color.

Historically in the Western world the color purple has signified royalty. Since craftsmen in the Phoenician city of Tyre started extracting purple dye from the shells of small sea snails, the Pharos of Egypt, Alexander the Great and many royals have adorned themselves in purple robes and accessories. Purple has also been associated with wisdom, bravery and spirituality. In literature, the term purple prose refers to extremely imaginative writing that boarders on hyperbole or even falsehood.

Purple food as introduced by our intrepid gourmet writers both looks good and as a rule is healthy, rich in vitamins, minerals and antioxidants. The wine world also has its fair share of purple comeliness.

After the occasional sound of a popping cork, color is the first sensation in wine appreciation. Wine lovers typically associate the color purple with young wines. The most purple of all beverages is probably Welch's grape soda, a shamelessly sweet quencher I share a guilty attachment to, but young red wines also often exhibit distinct purple tones. The color of red wines is mostly extracted from grape skins during fermentation and, to a lesser extent, during the aging process.

Specific grape varieties have a penchant for making purple-colored wines. Gamay is one and so is Syrah, but this week my featured purple wine grape was born in France and grew to prominence in Argentina.

Recent ampelography research indicates the thick-skinned Malbec grape is a natural cross between the two rather abstruse French varieties – Montpellier from Languedoc-Roussilon and Gaillac from the southwest. The grape thrived in Bordeaux and other regions in the southwest of France for centuries. A severe frost in 1956 wiped out most of the Bordeaux Malbec vines, and many French winemakers replanted with Merlot, Cabernet Sauvignon and other varieties that were more resilient to frost and other climatic extremes.

Today in France, only the Calors wine region in southwest France still maintains extensive plantings of this grape. In part because of global warming and even more so because they are rediscovering the attributes of the grape, Bordeaux winemakers are gradually planting more Malbec vines and the grape is reestablishing itself as an important minority contributor to top Bordeaux blends. Despite this mini renaissance of sorts, Malbec has found an even more hospitable home in the New World. 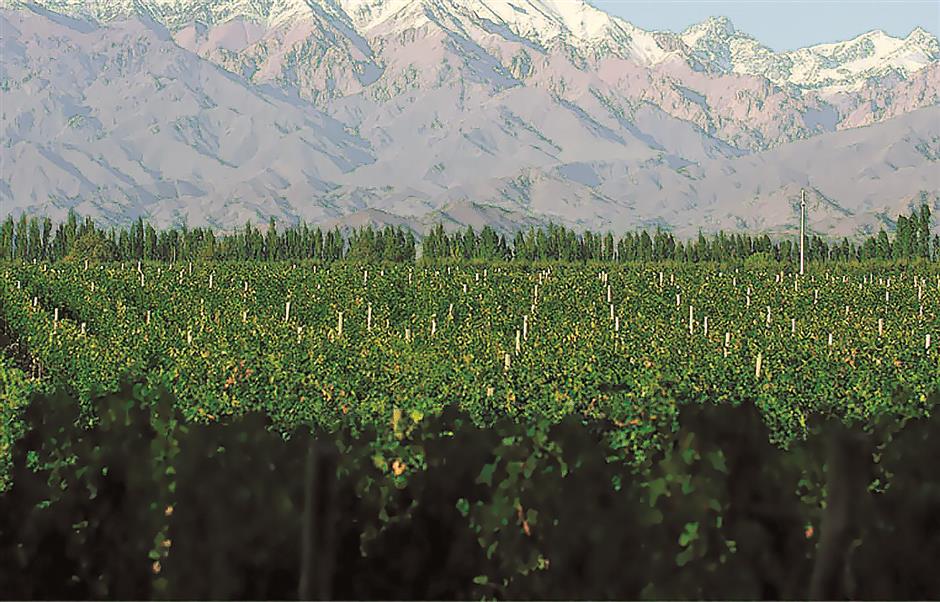 In the 16th century, Catholic missionaries planted vines throughout the European colonies and settlements that extended to the farthest reaches of the globe, including the foothills of the great Andes Mountains. These devout souls needed wine in order to practice the Holly Sacrament, and perhaps also to embellish their quotidian monastic lives.

Mendoza's winemaking history is nearly as old as the colonial history of Argentina. The Catholic Church's Jesuit order first cultivated vines and made wine in Argentina in the mid-16th century, intriguingly borrowing some agricultural techniques from the indigenous Incas and Huarpes people.

Subsequent Spanish and Italian settlers learned what the Jesuits already knew – Mendoza was an ideal place to cultivate vines. The French agronomist Miguel Aimé Pouget is credited with bringing the first French grape varieties, including Malbec, to Mendoza during the mid-19th century.

Mendoza's rise to wine-production prominence began in earnest in 1885, when a railway line was completed between Mendoza and the capital city Buenos Aires. However, for the majority of the 20th century, Mendoza and other Argentinian wine regions produced mostly cheap, diluted wines only suitable for the domestic market. Then in the late 20th century, pioneers like Nicolas Catena traveled through the Old and New World wine regions to further their winemaking knowledge and gain inspiration.

Why were Cantina and others able to make superior Malbec and other red wines? Altitude is one key factor. The elongated Mendoza strip of vineyards runs along the base of the Andes, situated between 800 and 1200 meters above sea level.

The altitude helps moderate the hot, dry climate of the region with warm, sunny days followed by evenings with cool westerly winds from the Andes.

Rivers with abundant clean mountain water for irrigation cross through the wine region, while warm, dry harvest periods mean winemakers are able to pick their grapes according to ripeness rather than being prisoners of the capricious weather patterns.

Sandy and rocky free-draining soils also benefit the vines. The unique terroir of Mendoza results in Malbec wines with deep purple-red, sometimes even blackish, colors and rich, fruity aromas and flavors with good acidity and gentle tannins – proven to be a winning combination.

Today, Mendoza Malbec reds are one of the world's most affordable premium red wines. Fortunately, a growing number of Mendoza Malbecs are available in Shanghai. Some of my favorites are produced by Malbec specialists like Bodegas Salentein, Sottano, Tomero and Inca. Other recommended producers include Argento, Trivento, Perdriel, Norton and Terrazas.

While the words Malbec and Mendoza have become synonymous in the modern wine world, I believe China has the potential to be an equally congenial home for Malbec. Alas, this tale of Chinese purple beauty is for another column. Stay tuned.

﻿
Special Reports
﻿
One of nature's rarest colors produces extravagant wine
The sweet vino art of assuaging stinky foods
Winter veggies meet Italy's vino queen
Fujian delicacies and mountain fresh Austrian white wines
A 2021 food retrospective: a look back at the year in local food
Get your Christmas dinner covered: Holiday menus to reward a year of hard work
Healthy, plant-based cuisine for people on the go
A sweet taste of France near your doorstep
Eye-catching, healthy and tasty: ower of purple pigment in food
Not for the faint of heart...or smell: stench to quench your taste buds
EXPLORE SHINE