One of the most popular English phrases, "all good things must end," nicely encapsulates the bittersweet feature story in this paper on the closing of M on the Bund. As one of Shanghai's highest profile and beloved eateries, M on the Bund well-served our fair city and adoring patrons for over two decades. Alas, it's time to bid a fond adieu. The doors will close, but not our memories.

Take it from someone who's treasured great wining and dining for well over half a century, a life of passion for great wines and restaurants is filled with poignant farewells. To take some artistic license from a quote from the late great American General Douglas MacArthur, "old restaurants never die, they just fade away." Cheers to my lovely memories of so many treasured wines and classic restaurants like M on the Bund.

In honor of Michelle Garnaut, the industrious founder and owner of M on the Bund, this week I'll feature a few generally off-the-radar wines from Downunder that merit our drinking attention.

I recently tasted some especially distinctive wines from Southern Fleurieu. This region is located just south of the more widely recognized McLaren Vale region and was granted AGI status in 2001. Shiraz is the most planted variety followed by Chardonnay, Cabernet Sauvignon and Sauvignon Blanc.

Vines were first planted in Southern Fleurieu in 1853 by Frenchman Buxton Laurie. His luck ran out later in the century when bushfires destroyed his vineyards. Winemaking in the region went through some difficult times but the ability of the region to make excellent wines was never in doubt.

Eminent wine author and authority John Gladstones proclaimed in his groundbreaking publication Viticulture and Environment, "the lower Fleurieu Peninsula has what appears to be the best climate in mainland South Australia for making table wines." A modest winemaking renaissance with over 40 vineyards and 10 wineries making world-class wines is growing confirmation of the august writer's views. After my tastings of Mt Jagged wines in Shanghai and Ningxia, I'm also a fan.

Wine-loving bankers Tod and Suzanne Warmer acquired Mt Jagged Wines in 2013. Going from finance to winemaking may not seem the most natural of transitions but the industrious couple with their passion and hands-on approach have lifted the reputation of the winery as well as the quality of the wines. Not surprisingly, the terroir also helped.

South Fleurieu boasts a cool climate that's significantly influenced by the maritime forces of the Southern Ocean that bequeath cooling breezes during the growing season and moderate temperate fluctuations. Temperatures can be up to 10 degrees different than those experienced in McLaren Vale and Adelaide during summer months. Climatic conditions along with ample annual rainfall provides for longer ripening periods, creating wines of complexity and distinct varietal characteristics.

Mt Jagged makes a trio of lively and expressive white, rose and red sparkling wines as well as vibrant Chardonnay and Sauvignon Blanc whites; but it's their Knobby Club Cabernet Sauvignon and Tangled Rope Shiraz single vineyard reds that especially impressed me. Specifically, I admired the elegance and finesse of the reds. We've come to expect big bold red wines from South Australia but the Mt Jagged reds also featured a welcome balance between fruitiness and freshness augmented by soft velvety tannins. The natural acidity in these reds makes them remarkably food-friendly.

I enjoyed the Mt Jagged Cabernet Sauvignon with a small group of Shanghai sommelier friends at a typical Chinese mixed table of dishes that comprised everything from red-style braised pork and crispy-skins chicken to sauteed sea bass with bamboo and stir-fried squid. While the two meat dishes were perfect partners, the freshness of Cab also made it an accommodating partner to the seafood dishes. Needless-to-say, the Mt Jagged sparklers would have also been effortless partners to the meal.

At a subsequent dinner in Yinchuan, I paired the Mt Jagged Shiraz with Ningxia pulled lamb and Hui -style spiced BBQ lamb. The combination of the melt-in-your-mouth tender and savory lamb with the elegant dark fruit and soft tannins of the wine was truly exhilarating. The memory of Mt Jagged Shiraz meeting Ningxia lamb is one I'll treasure.

McLaren Vale wines offer another delicious expression from the Fleurieu region and are far easier to find in China. One of my favorite producers is Chapel Hill who make elegant Shiraz and Cabernet Sauvignon reds as well as equally stylish Chardonnays. Other fine McLaren producers with wines available in Shanghai include D'arenburg, Wirra Wirra, Hardys Tintara and Kalamanda. So bravely looking to the future with a fine glass of Aussie wine in hand, I bid a fond adieu to M on the Bund and so many other special places we've lost over the past few years. 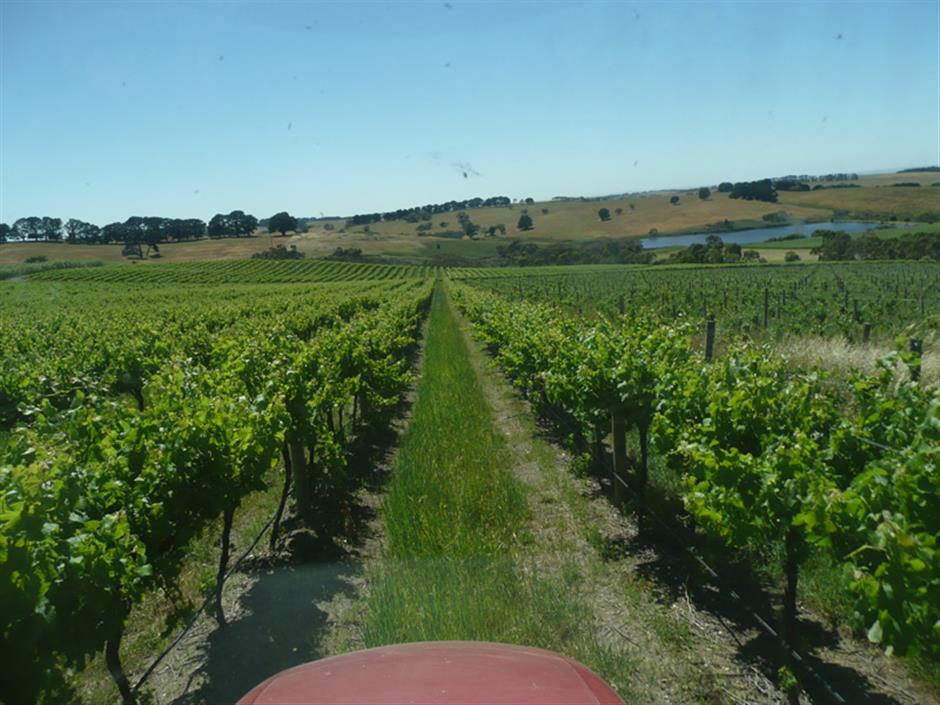