One size does not fit all for nianyefan

Chinese New Year's Eve dinner, or nianyefan, is the biggest meal of the year for Chinese people and a family event to celebrate the achievements of the past year and welcome the next with hopes and resolutions.

Due to the COVID-19 pandemic, many families have been unable to travel and get together, and cooking nianyefan is a nostalgic experience to bring back memories of home with familiar tastes and smells. For Chinese people, this meal, grand or simple, is a ritual to embrace the new year.

The Chinese Lunar New Year dates back more than 4,000 years, and in addition to the most important part, the New Year's Eve reunion, the holiday continues to the Lantern Festival, the 15th day of the first month of the lunar calendar.

The nianyefan dinner at home is usually served leisurely, as the idea is to gather everyone to enjoy the holiday spirit and share intriguing stories while the whole family watches the New Year Gala on CCTV, which has become a tradition since it was first broadcast live in 1983.

But cooking nianyefan at home is a marathon and takes days of preparation and cooking before the feast is eaten, so many families now choose to celebrate the Chinese New Year in restaurants, before the COVID-19 pandemic hit. 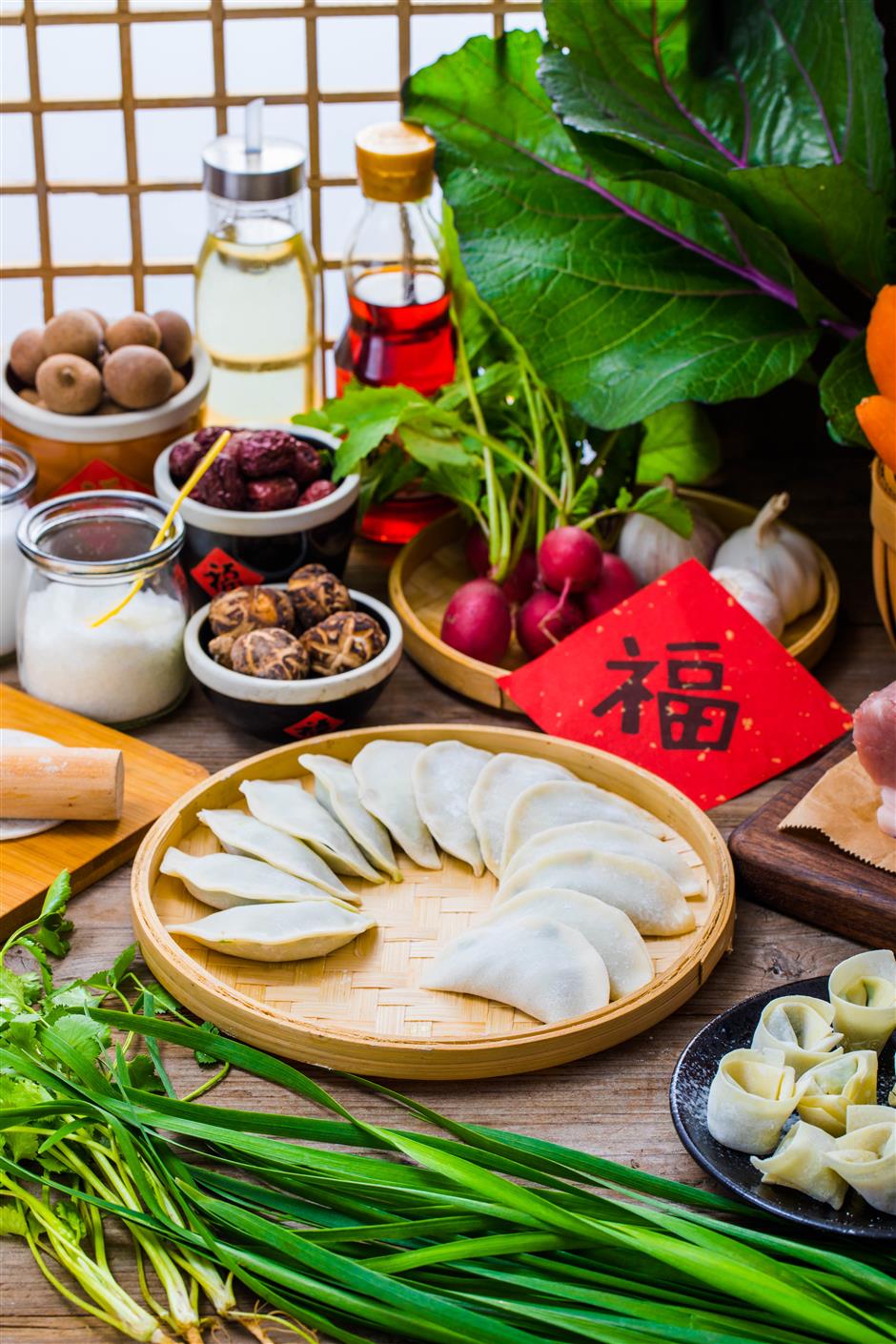 The Chinese New Year is a time for family reunions and celebrating the achievements of the past year.

There's no standard for how to arrange the nianyefan menu – every family has their own specialties and secret recipes, and the dinner is about using the best regional cuisine so those who work and live far from home can taste their hometowns' authentic flavors.

But there are several dishes that are cooked and served across the country due to their representations of good luck.

Fish is one of the must-have main entries, as the Chinese character for fish and the character for abundance share the same pronunciation – yu – so serving a whole fish symbolizes prosperity and more to come in the new year. As for the choice of fish, there can also be different meanings, like crucian carp which is pronounced "jiyu" sounds like the word "ji" for good luck.

The fish can be steamed or braised and its position matters in some regional cultures, such as placing the head toward the respected guests or elders, and the two people facing the fish's head and tail should drink for good luck. 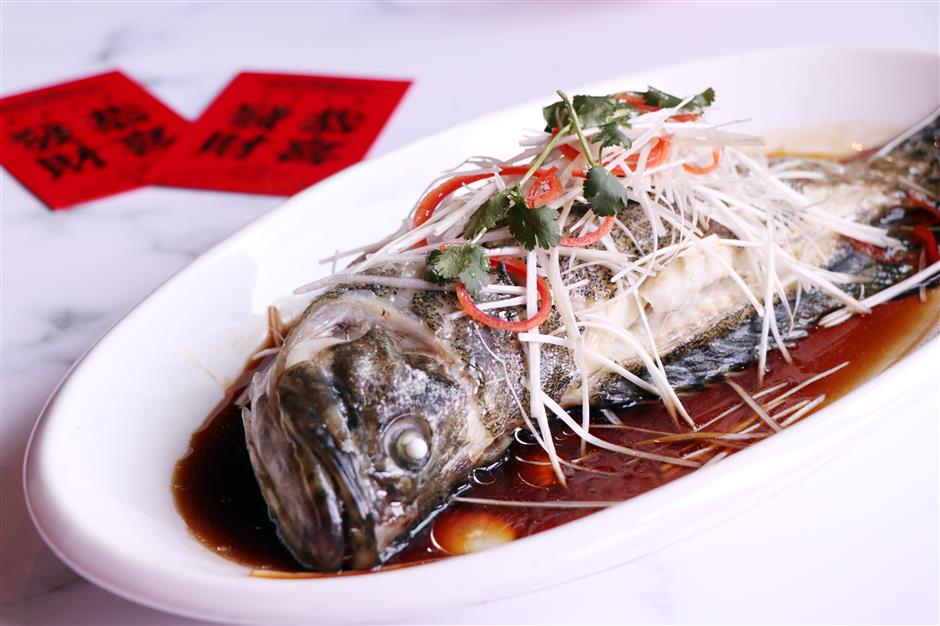 Families that cook the nianyefan dinner at home often have special dishes for the occasion, like recipes that have been passed on for generations or something everyone enjoys eating. To set up a more extravagant reunion dinner, a centerpiece dish like pencai, an assorted stew of upscale delicacies including abalone, sea cucumber and fish maw, is served. However, because it takes a lot of time and effort to make, most people choose to reserve cooked products from restaurants and reheat them at home.

Cured meat/sausage are also must-haves, either served alone after steaming or added to other dishes to elevate the flavor. The taste of cured meat varies depending on regional tastes; Cantonese cured sausage is slightly sweet while Sichuan-style is red and spicy.

In northern China, the Chinese dumpling jiaozi is the most essential item on the nianyefan menu, and it's also served for other occasions like Winter Solstice. It's a simple staple where savory filling is stuffed in a flour wrapper. The wrapper used for jiaozi is round and slightly thicker than thin, square wrappers used to make huntun or wontons. The best jiaozi is made with hand-rolled wrappers that have much better texture than store-bought wrappers made by machines.

A full-nutrition food featuring carbs, fiber from vegetables and protein from meat or eggs, jiaozi is also a lucky food since its shape resembles that of Chinese yuanbao, or a silver/gold ingot. The choice of filling varies greatly depending on individual taste and preference. Popular combinations include pork and leek, pork and Chinese cabbage, and chives and eggs. The filling can also be vegan by using hard tofu as the protein and pairing it with more fragrant greens like cilantro.

For Chinese New Year's Eve dinner, jiaozi is usually boiled and served at midnight. Even if you are already full from all the bold dishes, eating a few jiaozi is a must to celebrate the new year. 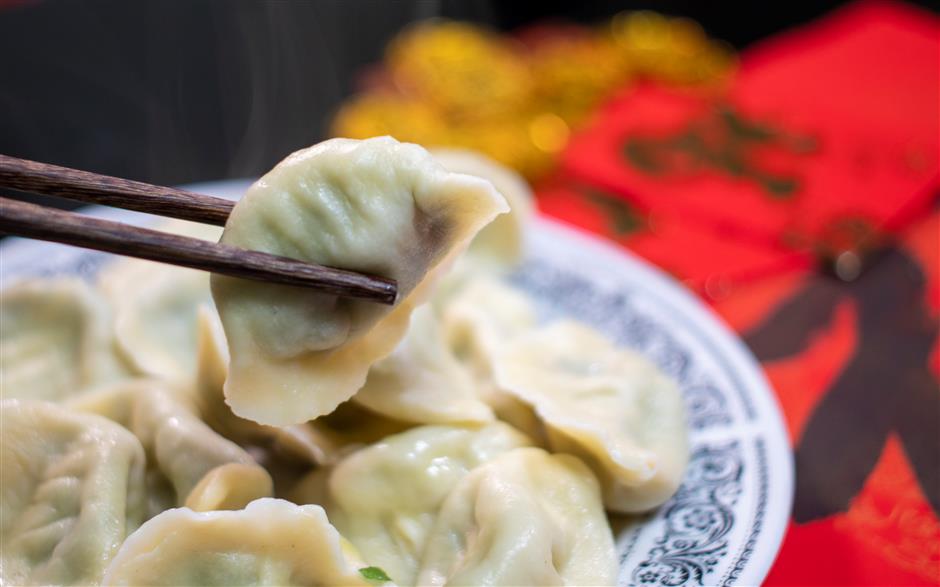 The staples for celebrating Chinese New Year vary in different regions, and the northern regions usually prepare dumplings for the festival.

There's also a fun game to play with jiaozi when it's served for Chinese New Year – a few coins are hidden inside the filling and whoever finds them is said to have extra good luck in the future. But for hygienic reasons, the coins are sometimes replaced with nuts.

The pronunciation of niangao implies "getting higher year by year," and it's one of the reasons why niangao is a holiday essential. There's a legend about the rice cake's origin in China. A monster called nian, a predator that lived in deep forests all year long, preyed on other animals from spring to fall. But when cold winter arrived and other animals went into hiding, nian would come down the mountain and eat people.

To solve this problem, a clan from a family named Gao prepared a large quantity of square grain bars and placed them outside their doors. People hid in their homes and waited for nian to come. When nian couldn't find any people to eat, it ate the grain bars and left when it was full.

People would then come out and congratulate each other for escaping nian's wrath. The scheme continued year after year and gradually people began calling the grain bars niangao, after nian the monster and gao the clan that defeated it.

An early record of eating rice cake during Spring Festival was found in "Yun Xian Za Ji," a book from the Tang Dynasty (AD 618-907), which said "eating yulianggao on the 15th day of the first lunar month." 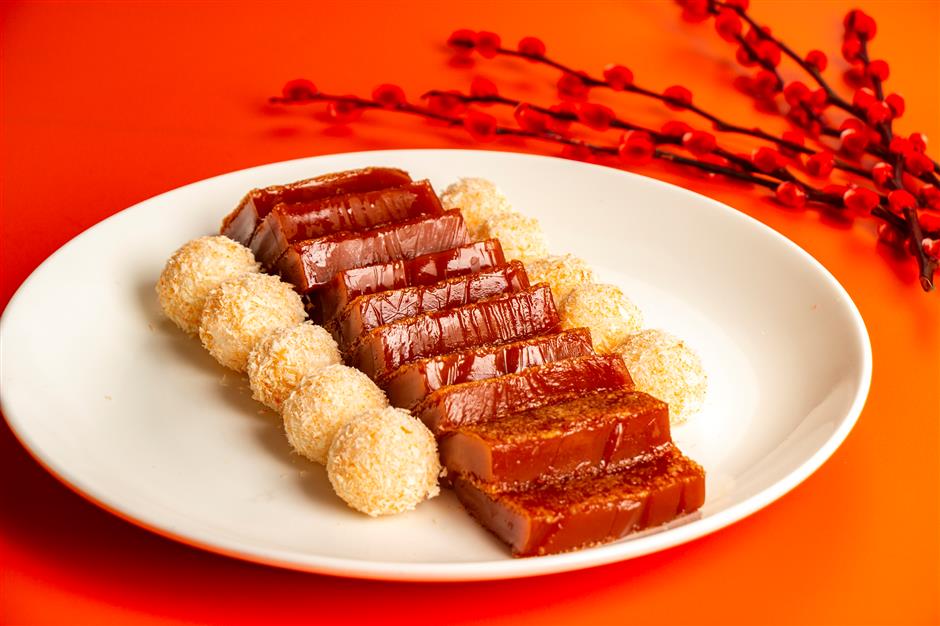 The city of Ningbo in Zhejiang Province is known for rice cakes made of wanjingmi, or late grained rice, which goes through several procedures to achieve its soft, smooth and sticky texture. The rice cakes are often savory and cooked in stir-fries or soups. Signature recipes include rice cake and shepherd's purse stir-fry, gazami crab and rice cake stir-fry and rice cake soup with green vegetables and shredded pork. There's also sweet rice cake with osmanthus sugar sauce.

Spring rolls, which are fried with sweet or savory fillings, symbolize wealth and lucky traditions in many places, including Shanghai.

In some places, spring pancakes, or chunbing, are prepared for Spring Festival to mark the beginning of spring. The ultra-thin and soft pancakes are served alongside various stir-fries in the form of shreds, such as bean sprouts, spinach, pork shreds and fresh scallions. 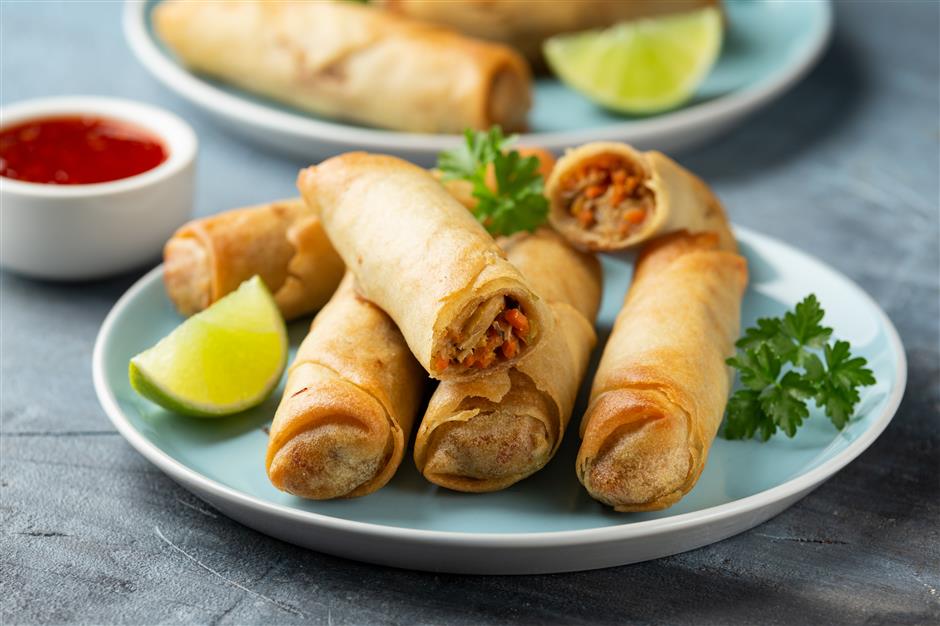