A park steeped in a poetic past 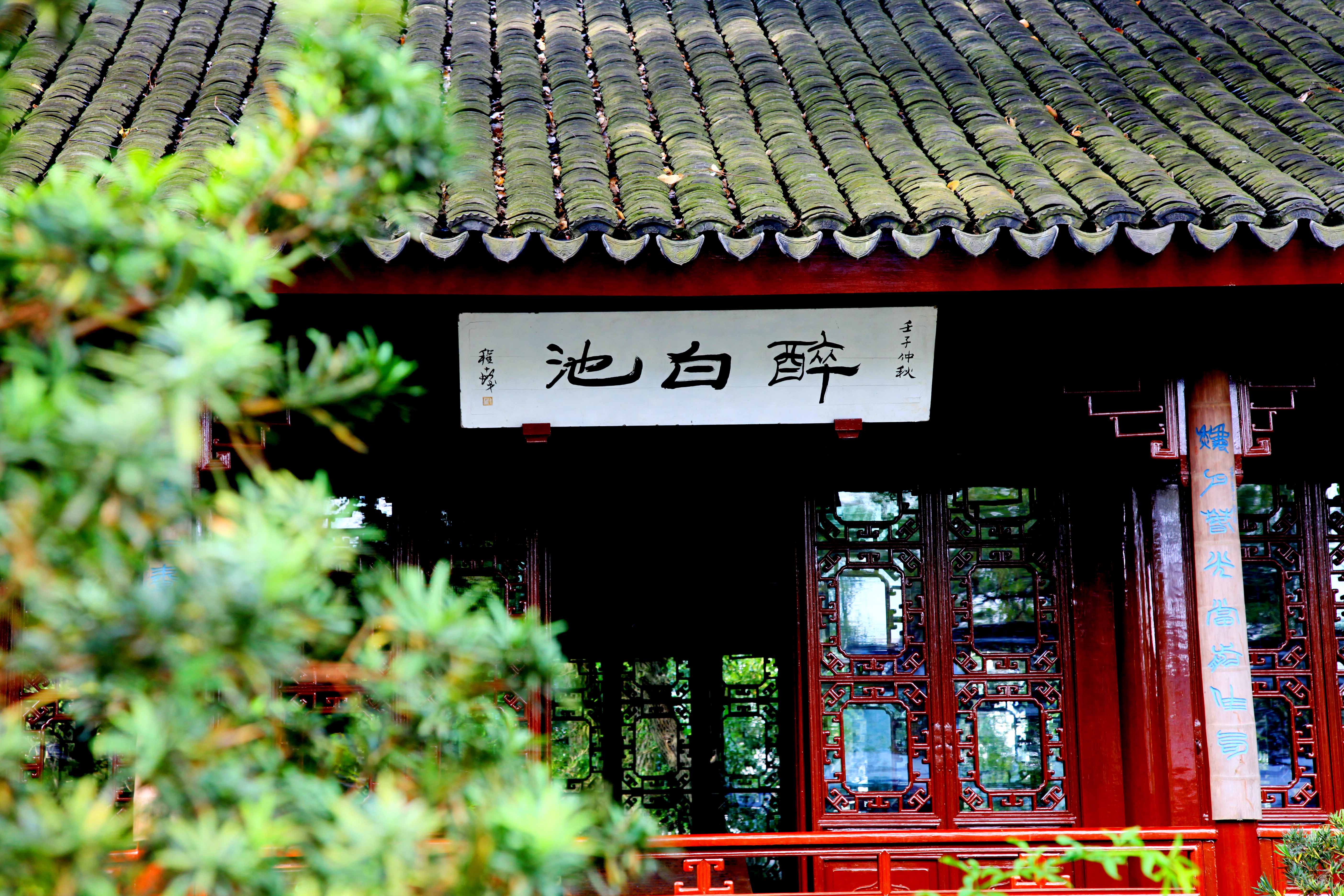 Zuibaichi Park, with its centuries-old trees, lush greenery, rippling waters and stately pavilions, is one of Shanghai’s oldest and most beautiful examples of a classic Chinese garden.

The essence of a Chinese garden lies in its skillful recreation of nature. In addition to delicate architecture, the Chinese built rock mountains, dug ponds, planted trees and sowed flowers to give the impression of grand nature in a limited space.

Sculptures, paintings and other artworks were added to merge nature with philosophy and culture.

Zuibaichi, which translates as Drunken Bai Pond, was named after the famous Chinese poet Bai Juyi (AD 772-846) by the then owner, painter Gu Dashen, who felt “drunk” with the beauty of Bai’s verse.

The five-hectare park, located in the southern part of Songjiang District, has a history dating back more than 900 years and is considered one of Shanghai’s five most celebrated classic gardens.

Its landscape architecture draws from the classical style of halls, waterside pavilions, kiosks, verandas and rockeries. Long corridors lead visitors to all corners of the garden, offering snapshot views on sunny days and sheltering spots during rain.

The park contains both interior and exterior gardens.

“The interior one is the core, the park’s crème de la crème,” says Cao Xueli, Zuibaichi’s senior tour guide, who has studied the park’s history and written introductions to each scenic spot.

It is the original garden, featuring a 300-year-old ginkgo, 120-year-old camphor trees and 100-year-old peonies.

The four-hectare external garden was built in 1958 as a recreation center for Songjiang locals. It officially opened to the public in 1959, under the name of Songjiang County People’s Park. Twenty years later, it reverted to its original name of Zuibaichi Park.

In the Qing Dynasty (1644-1911), the villa and grounds passed to painter Gu, who expanded and designed the garden that survives today. It included the 700-meter-long lotus pond, flanked by jagged rockery, bamboo and plum trees along the banks.

Classic Chinese gardens were popular gathering places for scholars and artists to find solace and inspiration.

It was Gu who gave the park its present name out of admiration for the poet Bai, who was considered a genius for taking traditional verse to new heights. Bai is known for his plain, straightforward and easy-to-understand style of poetry, and for his satirical criticism of social problems. Bai never visited the site that bears his name. 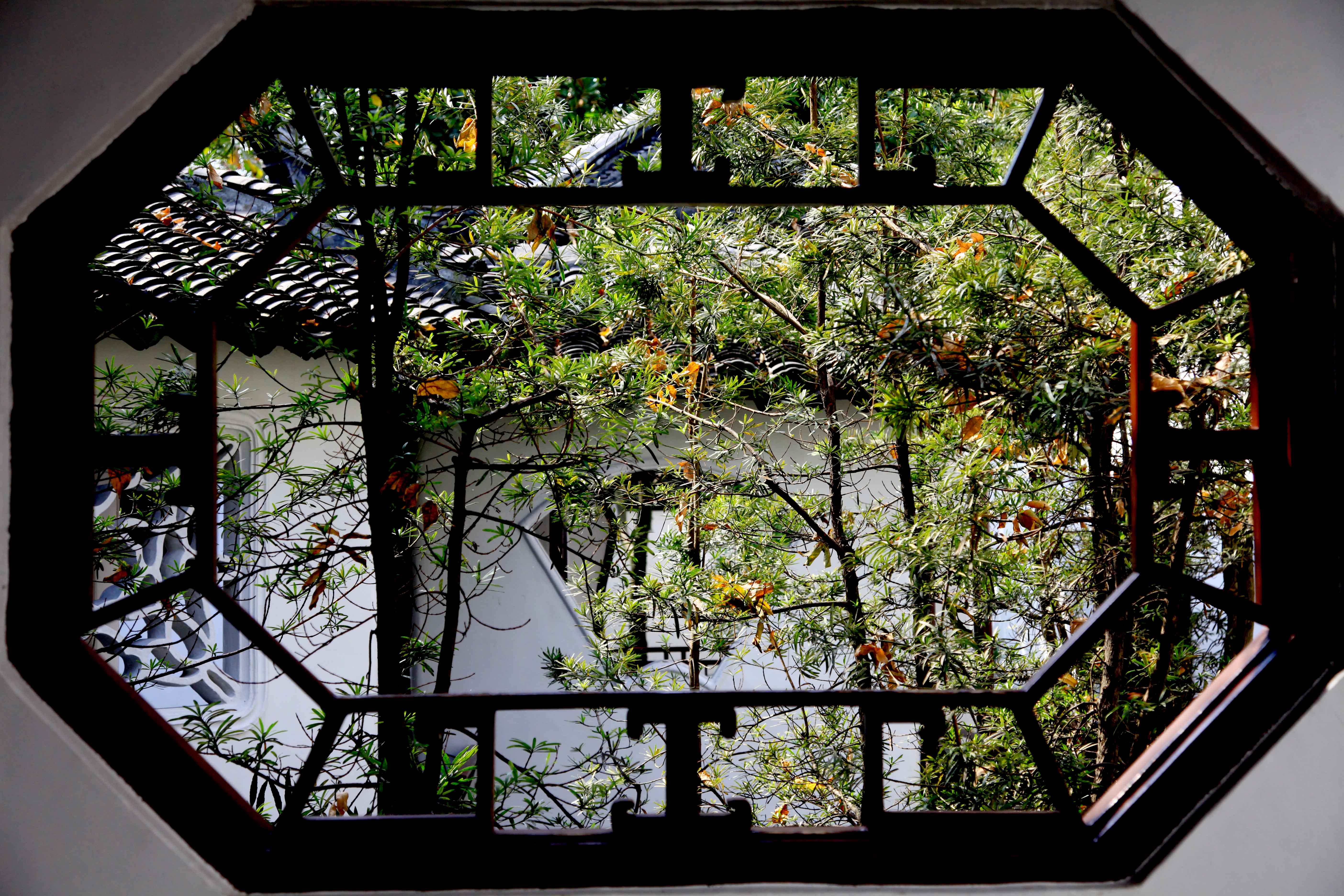 Zuibaichi Park is an excellent place to wander and linger, to meditate and find solace.

Entering through the original front door, visitors are greeted by a stone screen wall, estimated to be 300 years old and embossed with scenes of the park — a kiosk by the pond where lotus blossoms and a scholar napping under a gingko tree, watched over by a young apprentice accompanied by two red-crowned cranes.

Along the winding cobblestone path is Diaohua Hall. Its beautifully carved doors and window frames hark to the architectural prowess of Zhang Zunan in the Ming Dynasty.

“The architecture was originally located on Xita Lane in Songjiang’s old downtown, and the last pieces were finally relocated to the park in 1984,” Cao says. “We preserved each of the bricks and pieces of wood.”

In the front room of the hall, a carving contains a whole set of “One-Hundred Flowers” and in a back room are figures from the “Romance of the Three Kingdoms,” one of the four famous ancient Chinese literary classics.

Opposite Diaohua Hall is the “Five-Color Spring.” According to a myth from the Three Kingdoms Period (AD 220-280), Taoist priest Ge Xuan was practicing alchemy in Songjiang’s West Lake. After years, he finally concocted an immortal medicinal powder and became so excited about his discovery that some powder accidentally spilled into the lake. Suddenly, the waters shone in five colors.

An ancient slab inscription of the “Five-Color Spring” sage was passed down and eventually moved to Zuibaichi Park. Visitors are welcome to dip their hands in the spring water, said to bring a healthy, happy life.

Further into the park is Xuehai Hall, built in the late Qing Dynasty. It is famous as the site where Dr Sun Yat-sen, the founding father of the Republic of China, made an important speech in 1912. The front of the hall is guarded by a pair of imposing stone lions that originally guarded the tomb of the first wife of Xu Jie, a cabinet minister during the Ming Dynasty.

“It took me half a year to research this history,” Cao says. “I also produced a map showing where Sun moved about during his stay in Songjiang.” 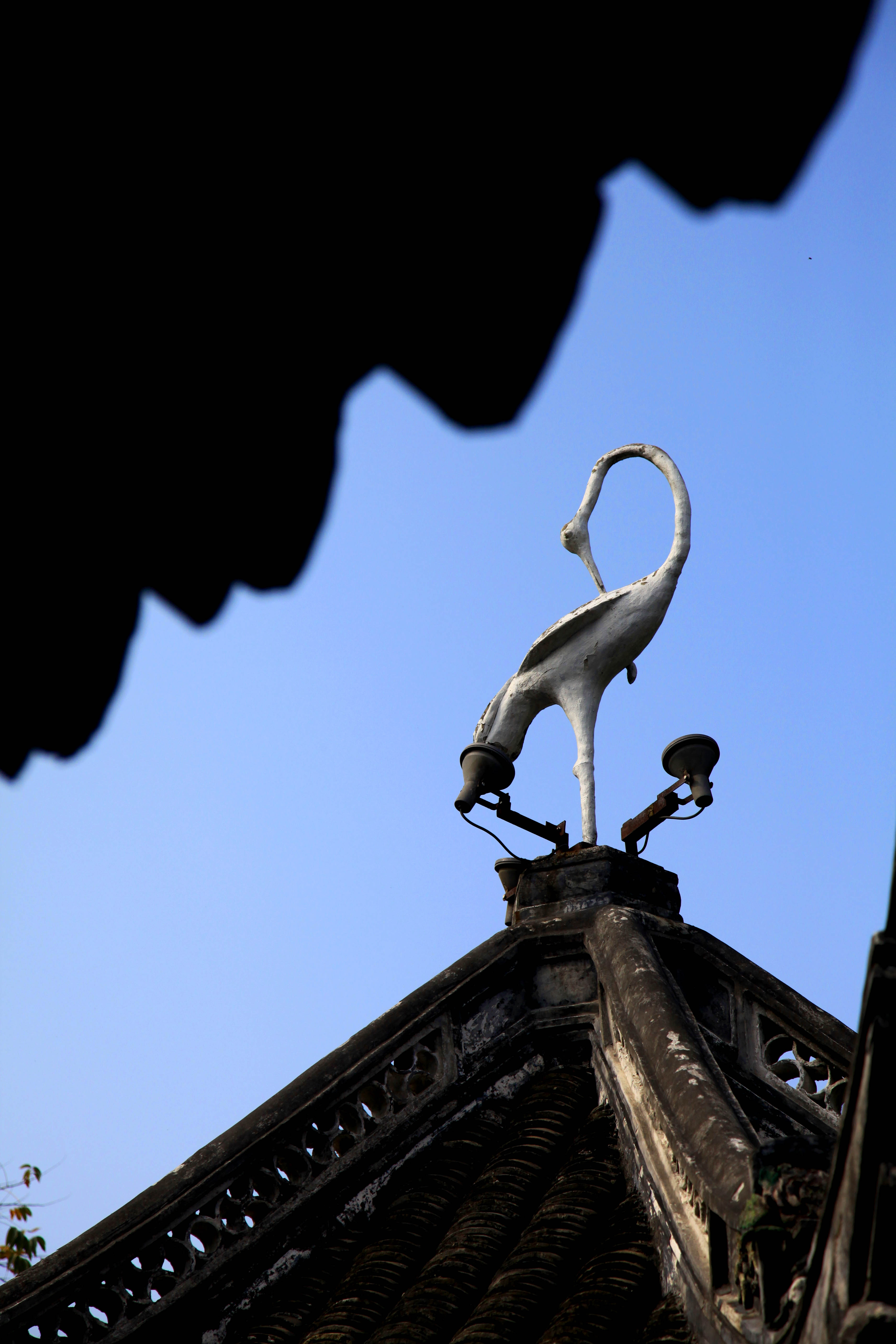 Zuibaichi Pond sits at the heart of the garden. The inscription of the pond’s name was written by Cheng Shifa (1921-2007), a modern haipai (Shanghai style) painter and native of Songjiang.

The park’s cultural works reflect visits by generations of high-ranking officials, scholars and artists. Every corner of the garden is studded with sculpture, old calligraphy and other art pieces.

The park boasts 28 ancient inscribed boards and 24 couplets, all written by famous calligraphers.

In the southeast of the garden are 30 stone tablets depicting the 91 famous sons of Songjiang. The stone work was created by sculptor and painter Xu Zhang during the Qing Dynasty.

“Every year descendants of the 91 Songjiang celebrities come back to the garden to remember their ancestors,” Cao says.

The original stone carving of “Song of the Red Cliff” by the calligrapher Zhao Mengfu (1254-1322) is also on display in the interior garden. It is regarded as the biggest treasure in the park.

Another highlight is a stone engraved with deer whose heads look back, expressing the homesickness of Songjiang natives who left their hometown. The stone piece was originally located in front of the Puzhao Temple and was moved to the park after the temple was destroyed many years ago.

Today, art shows of Chinese ink paintings and calligraphy are held in the garden every month or two.

“During the Spring Festival, the city’s calligraphers will gather in the park to write free New Year’s scrolls of good wishes for locals,” Cao says. “The event is extremely popular.” 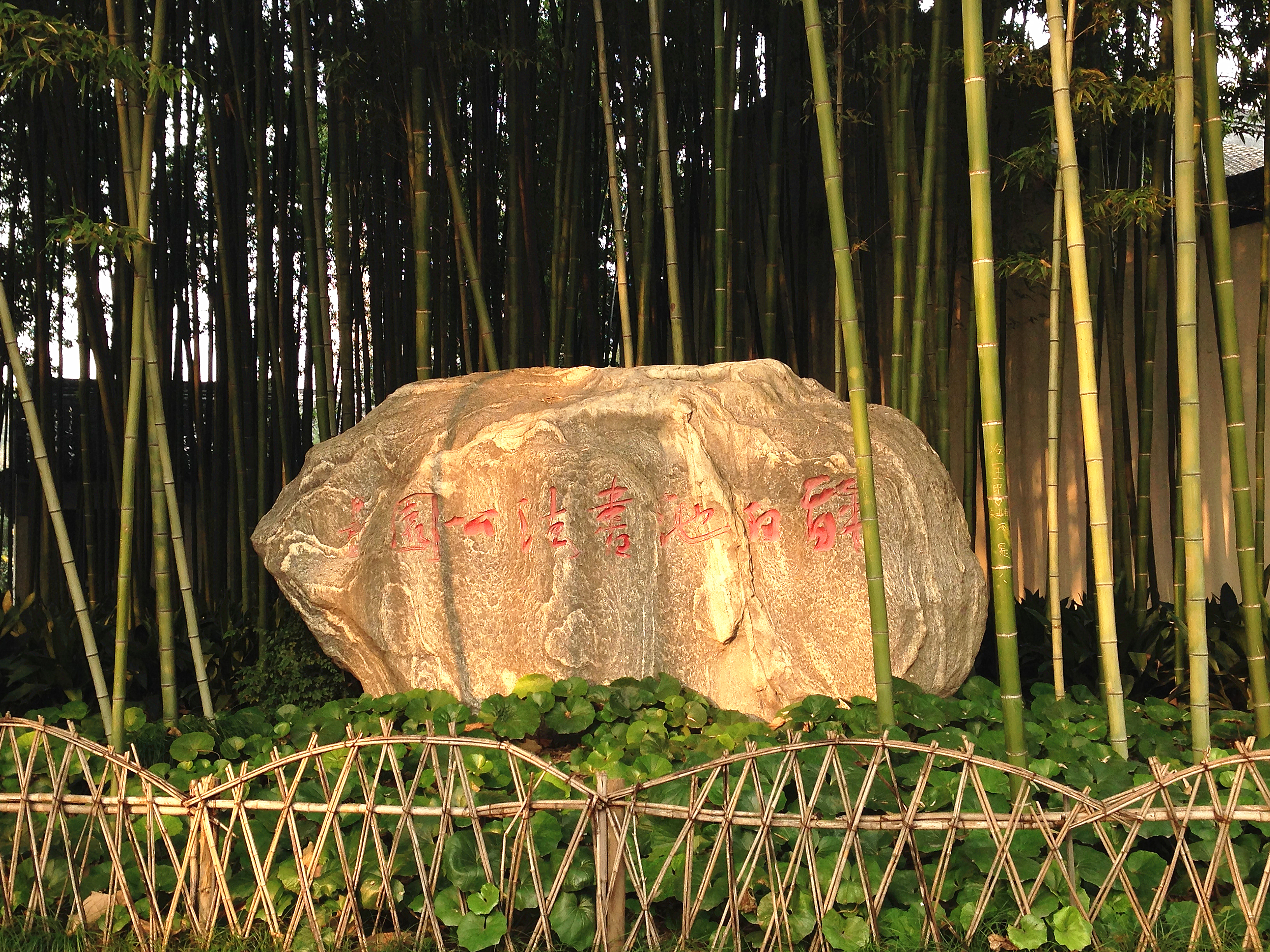 If the weight of history gets a bit too heavy in the park, there are green woods and flower gardens to lend a lighter touch.

Zuibaichi Park is famous for its seasonal floral displays. In summer, the pond is smothered with luxurious lotus blossoms. Cao says new lotus varieties are added to the park every year.

The pavilion in the middle of the pond is an ideal place to stop and enjoy a summer breeze or watch golden fish swimming about.

In the autumn, chrysanthemum and sweet-scented osmanthus are in season. The park has almost 200 osmanthus trees, including two century-old trees in Xuehai Hall.

In cold winter, the plum trees begin to blossom.

Every spring, azaleas, peonies and begonias burst forth in dazzling color. In 2014, the park opened a peony garden with more than 600 shrubs of 60 breeds. The peony king is a 100-year-old shrub originally grown by scholar Jin Xuewen during the Qing Dynasty. The seeds of that peony are said to have been passed down from the Ming Dynasty painter and calligrapher Dong Qichang, who in turn gifted them to Jin’s ancestors. 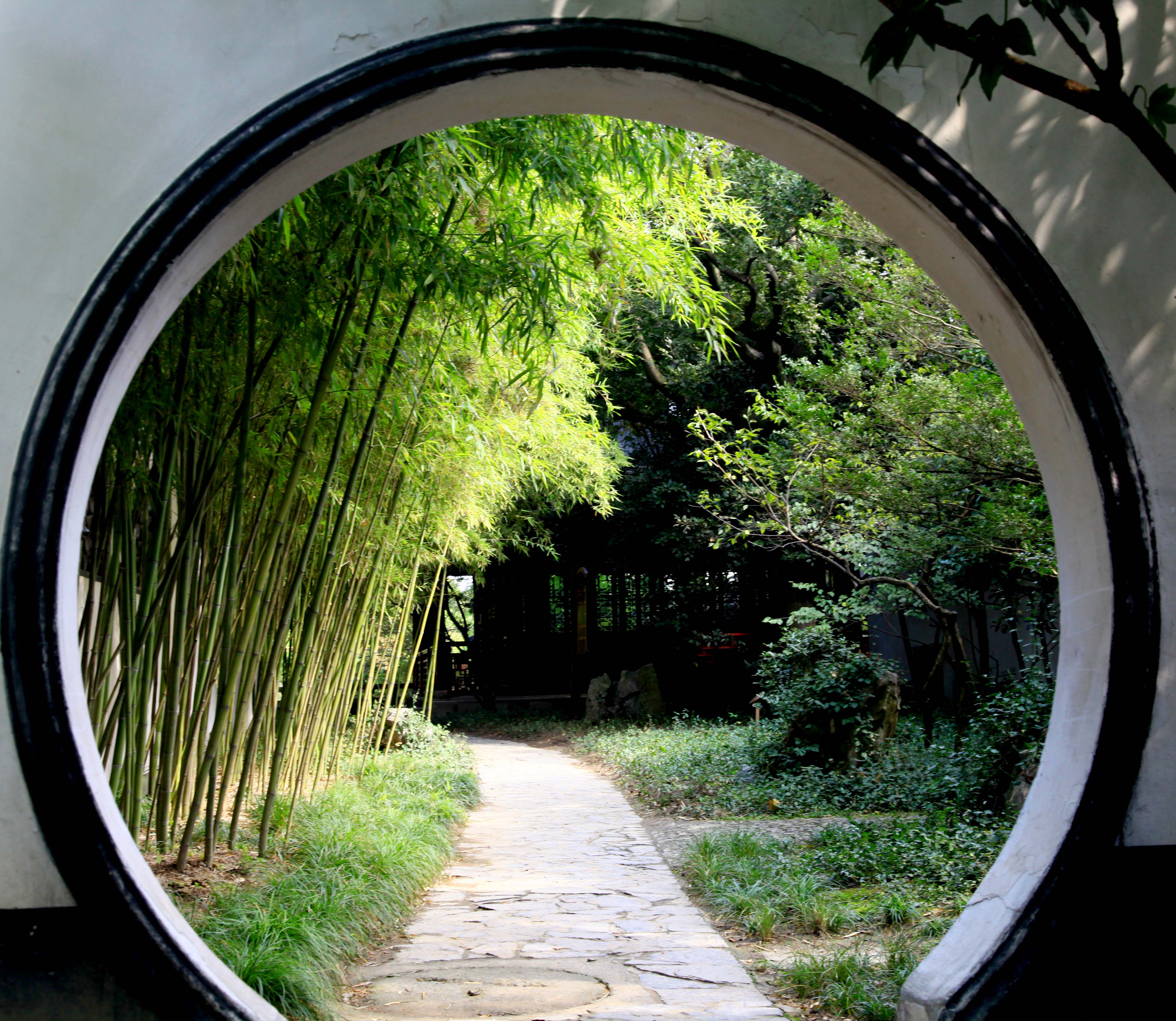