It's worth the search: a garden tucked away 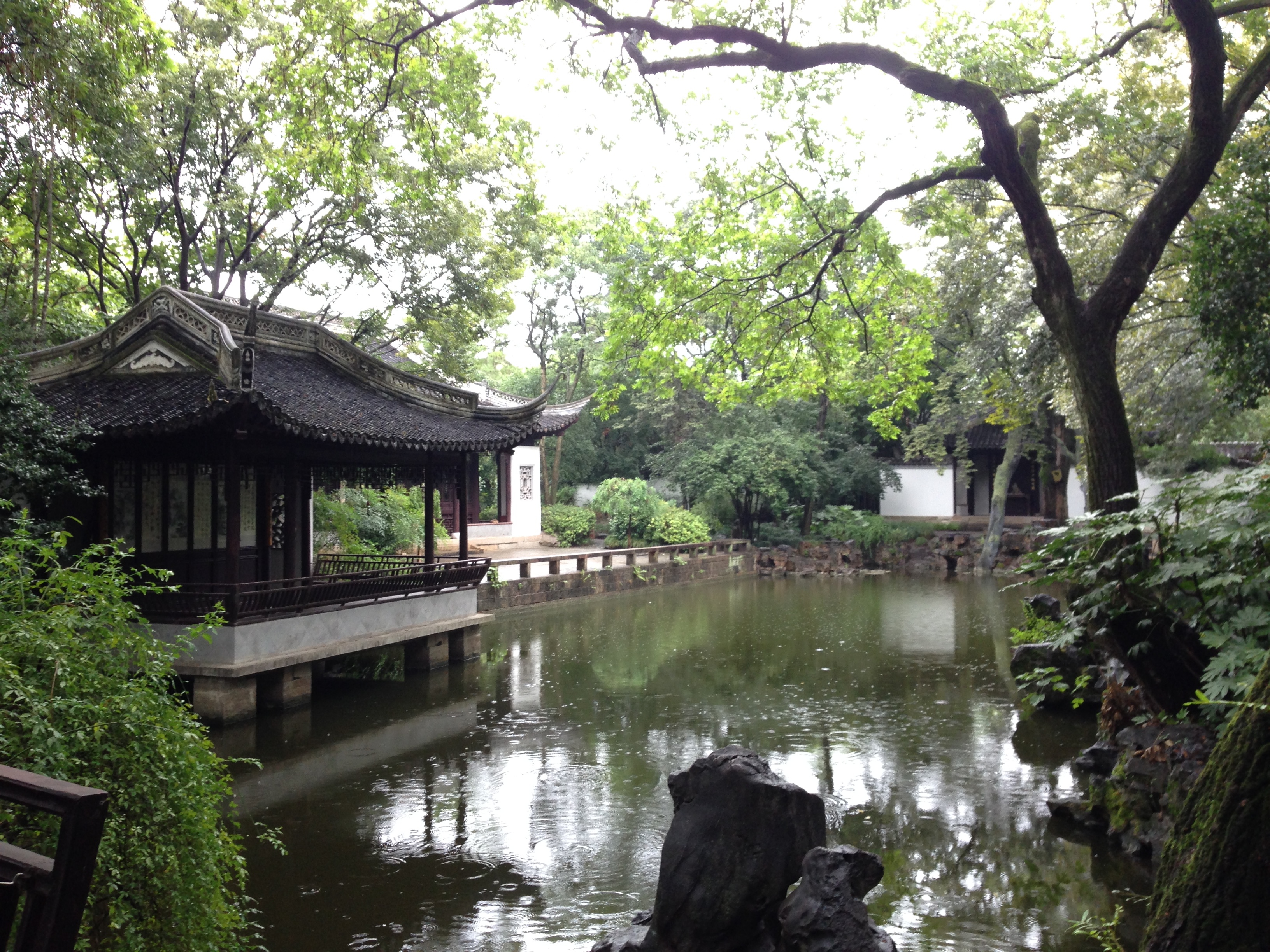 Hidden in a humble old lane and overshadowed by the noise of a nearby commercial street, Qiuxia Garden in suburban Jiading District doesn’t attract as much attention as it deserves. This somewhat neglected site is one of Shanghai’s five surviving ancient gardens.

Like a typical Suzhou-style garden, Qiuxia is not particularly large, covering an area only a little larger than three football pitches. But size is deceiving, and it’s easy to get lost in the garden’s zigzagging cobble pathways, dead ends, rockeries with deep caves, lush bamboo forests and sprawling corridors. One or two stray cats may pop up unexpectedly from the tall grass, giving visitors a fright.

A rainy autumn day is an ideal time to visit Qiuxia Garden. The clear, crisp autumn winds dye the garden’s famed maple trees a flaming red, and the bamboo takes on a greener sheen in fine drizzle. Take a window seat in the lakeside teahouse and you can idle away the time chitchatting with the old waiter there, who speaks only local Jiading dialect but is always happy to share the garden’s history with customers.

Established in 1502, Qiuxia Garden was once the private residence of Gong Hong, minister of public works in the Ming Dynasty (1368-1644). In 1582, local scholar Jin Zhaodeng built his own garden alongside Gong’s. It featured a lotus pond and a bamboo forest.

In 1654, with the decline of both families, the two gardens were merged and sold to a salt trader surnamed Wang. He called the site Qiuxia Garden, meaning “autumn’s sunset glow.” In 1726, Wang’s descendants bestowed the garden to Jiading’s Chenghuang (City God) Temple as a shrine for locals to hold religious events.

After centuries of warfare and political upheaval, Qiuxia Garden was confiscated by the government and opened to the public in 1979, after two renovations. 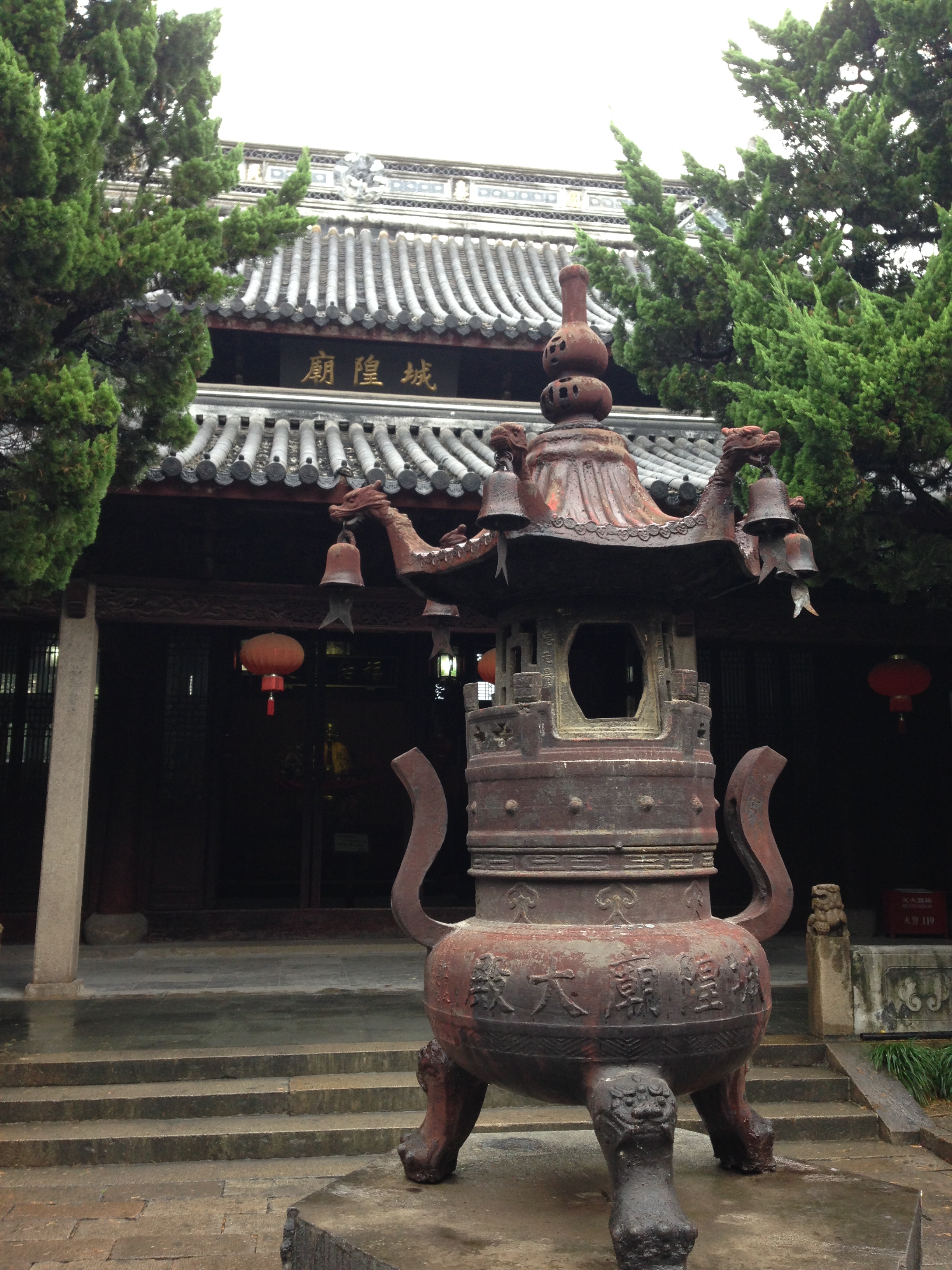 Today, it features both a classic garden and also the Taoist Chenghuang Temple, where locals worship on the first and fifth days of a lunar month.

The temple is the first complex to greet visitors at the entrance of the garden. Red candles and joss sticks flicker, and smoke curls lazily into the air. The temple is a place of peace and holiness.

According to the Taoist beliefs, Chenghuang is the god of water and soil, who protects the land and the people living on it. The temple’s main hall stands more than 52 meters high and is carved with animals and the Eight Immortals on its roof ridges. Eighteen stone lions ring the hall, fending off evil spirits.

Visitors can discover their personal god of protection, using their lunar birthdays and the 60 constellations and 12 zodiac sculptures that local artist Pan Yunxing created.

A turn past the temple is the Chishang Pavilion, built between 1821 and 1850. In the courtyard, a century-old osmanthus tree still blooms, emitting sweet scent.

The pavilion leads to a kiosk shaped like a boat. It’s called the Early Boat and was constructed in the traditional architecture of ancient Chinese gardens. The boat symbolized the host’s ambition to travel around the world and pursue a life of freedom and fun. The kiosk’s bow section was made from natural lake rocks rarely seen in a garden of this kind.

The highlight is a ceiling-high mirror that reflects the landscapes of the northern bank and the southern hill. It is another clever architectural device of a Chinese garden — juxtaposing reality with the virtual world by bringing distant landscapes nearer.

From the boat kiosk, a cobblestone path leads to the Conggui Pavilion. Visitors should take care not to walk too quickly or they might miss three old stones from the Ming Dynasty. Each about two meters high, the three stones are nature’s inscription of the Chinese characters for blessing, fortune and longevity.

Conggui Pavilion took its name from the lush osmanthus trees — gui  in Chinese — that surround it. The center of the pavilion is a perfect place to take a rest, with all the windows open. The four different views from those windows reflect the four different seasons. From the eastern window, one can see Taohua Lake, flanked by spring willow trees. To the south, banana leaves provide shade from the summer sun. The western view looks on a courtyard aflame with maple trees in the autumn. And when the winter sets in, the northern view overlooks a hilltop dotted with pine trees and sometimes a snowy icing.

Northeast of the Conggui Pavilion is a rockery of yellow stones.

Climb the steps to the hilltop hexagonal kiosk, a perfect spot to enjoy the sunrise or sunset.

In olden times, it’s said that people could stand here at dusk and see the old Jiading city walls and patches of rice fields, their gazing accompanied by the toll of the Fahua Tower bell. Beside the kiosk is a gingko tree more than 100 years old. Every autumn when the leaves turn yellow and fall to the ground, a golden carpet covers the hilltop.

Follow the road downhill, making sure you don’t miss the Guiyun Cave, which is tucked in the hill behind a maple tree. It’s not big. Only one person can pass through at a time. Though the cave is deep and dark, with twists and turns, it is a refreshing respite on a hot summer day.

Out of the cave and along the main road, visitors will come to the Yanlu Pavilion, which is surrounded by green bamboo. It features some precious ancient calligraphy works. A winding cloister leads to the Biwu Pavilion, one of the biggest buildings in the garden. It used to be a room reserved for receiving guests. In the front yard, two century-old pagoda trees still stand. A spacious open-air terrace there is said to have been once used for concerts.

To the east of the pavilion, there is a manglietia tree that blossoms in spring and bears fruit in late summer. The fruit is used in herbal medicines to make drinks that locals believe dispel inner body heat. 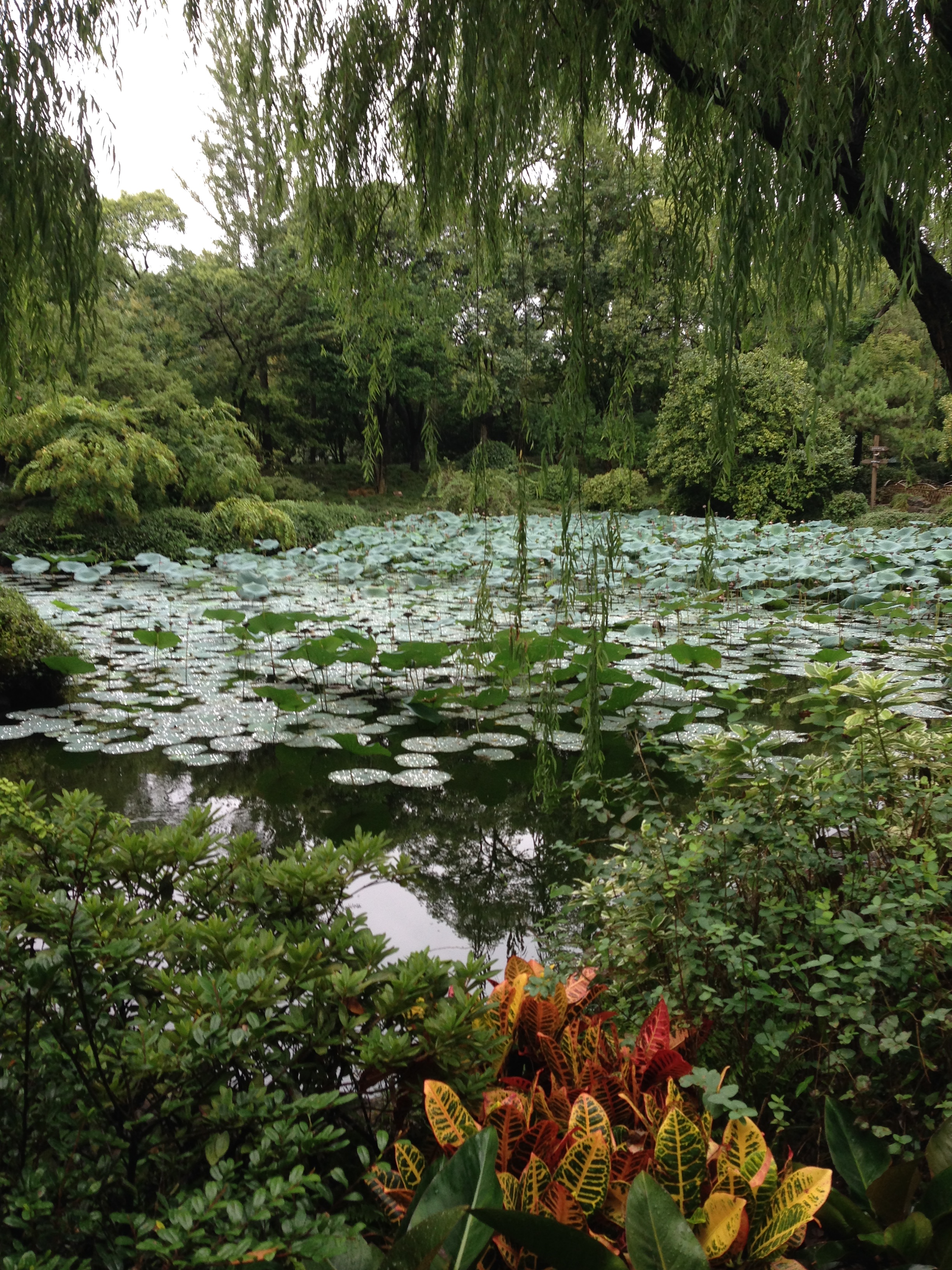 Taohua Lake is at the center of the Qiuxia Garden. Lotus grows here. Take a stroll around the lake and turn to the southern hill, which was formed by the soil dug to create the lake. A narrow stone path winds to the top of the hillock and its copse of old trees.

At the foot of the southern hill at the Xianyan Pavilion, there is a camellia tree 4 meters high and more than 100 years old. Its springtime profusion of blooms is a favorite with shutterbugs.

Xianyan Pavilion today is used as a showroom for the Jiading’s heritage tradition of yellow grass weaving. Weavers traditionally used only grass grown in Xuhang Town. It is very smooth and very tough, perfect for making baskets, shoes, bags, dustpans and other everyday items. The weaving is a skill passed down through generations, but machine production has meant the demise of hand weaving. In addition, rapid urban development has dried up sources for yellow grass.

Still, old traditions die hard. The pavilion serves as a studio for a grandmother weaver, who has been doing her work there for many years. Her products are on display, and on some days, she is happy to walk visitors through the steps of her work.

Qiuxia Garden is such a delight. There are simply so many large and small things to captivate the attention.

Mizhinang Stone, east of Ping Hill, is a magic rock in Jiading, said to ooze milky water on rainy days. The stone was found in the Qing Dynasty (1644-1911), and a scholar of the era carved the name Mizhinang on the surface. During the war against the Japanese invasion in the 1930s, locals covered the stone with lime and hid it among the rockeries. A Japanese official bent on searching for the fabled stone was unable to locate it.

In 2001, stone expert and collector Wang Guisheng rediscovered the legendary stone and brought it back to the light of day. Visitors who tour the garden on a rainy day to the garden can check to see if it really oozes a milky juice. 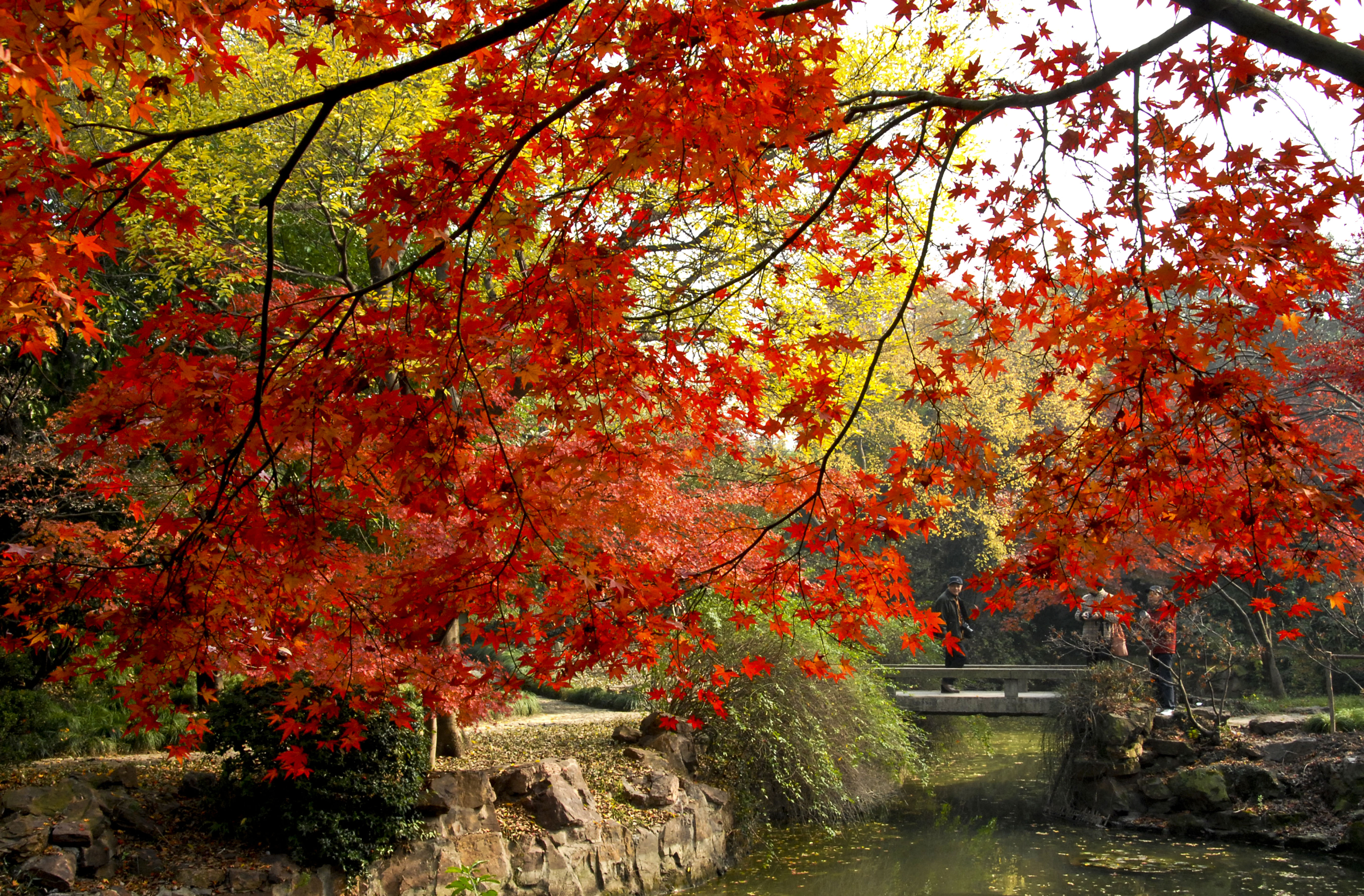 Autumn is the best time to visit Qiuxia Garden.