The jewel in the crown of Shanghai downtown 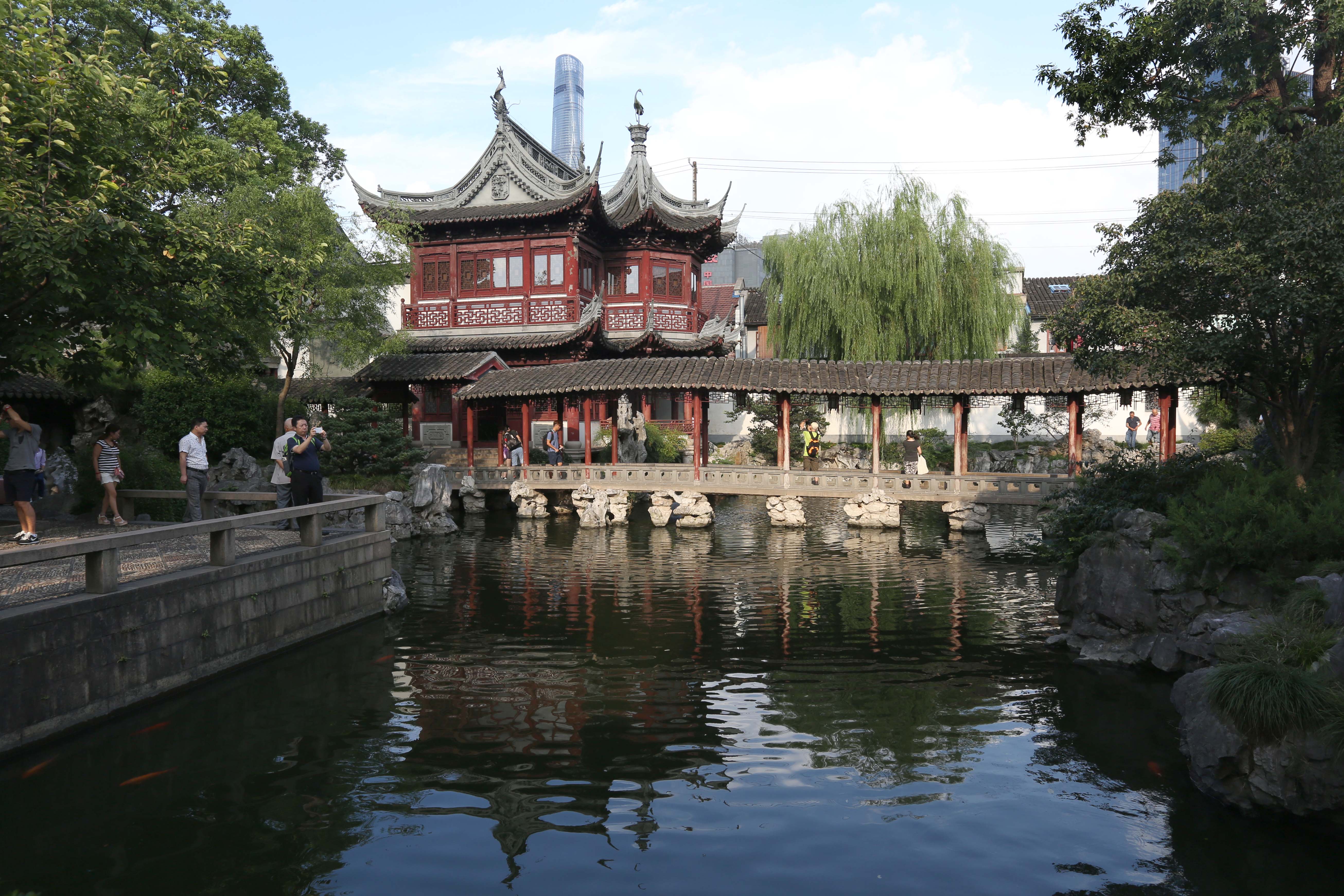 Sitting in the very heart of bustling, noisy Shanghai, Yuyuan Garden is an oasis of peace and comfort, with its glittering pools of goldfish, lush pine trees, fine rockeries and delicate kiosks.

It’s a top attraction in all the tourist brochures, but its true value may be deeper and more hidden than what a casual visitor can appreciate. The history of this fully preserved ancient classic garden is tightly interwoven with Shanghai’s fortunes over the past 450 years.

“People normally think the garden is all about the Nine Zigzag Bridge and the Mid-Lake Pavilion, but it’s a lot more than that,” says Zang Ling, management director of Yuyuan Garden.

The garden was first built during the Ming Dynasty (1368-1644) by Pan Yunduan, a high-level government official, as a gift to his parents. Over the years, it was expanded to include more water features and elaborate architectural structure. In Chinese, yu literally means “peace and comfort.”

Construction work on the garden lasted more than 60 years, from 1559 to 1620, and much of the design is attributed to the famous landscape architect Zhang Nanyang.

Pan’s father died in 1582, so it was Pan himself who came to enjoy the garden on his own retirement. He invited opera troupes to give performances and held kite-flying events, cricket fights and religious services in the garden. Pan’s extravagant entertainment and lifestyle quickly drained the family fortunes. The garden changed many hands after his death.

In the Qing Dynasty (1644-1911), Yuyuan Garden underwent renovation by rich owners several times, and it eventually became a club and recreation center for Shanghai’s elite.

The garden has also suffered the destruction of wars.

During the Opium War in 1842, the British army set up a headquarters in the Mid-Lake Pavilion. In 1860, foreign mercenaries hired by the Qing government to fight local rebels destroyed rockeries in Yuyuan Garden, drained the ponds and erected Western-style barracks.

During the War of Resistance against Japanese Aggression (1937-45), invaders torched some of the garden pavilions.

Still, the garden survived, and its history is marked by multifaceted uses.

In the early 1900s, the garden was headquarters for various Shanghai industrial and commercial associations, all competing in efforts to refurbish the garden.

In the late 1980s, the garden underwent a series of renovations that restored architecture to its former glory.

Like a typical classic Suzhou-style garden, Yuyuan is small, at about 2 hectares. But it is perfectly arranged with pavilions, towers, rockeries, paths, lakes and plants.

Surrounding the garden is a lively area of bazaars, restaurants and old-style lanes. Small wonder that Yuyuan Garden is now the most popular tourist attraction in Shanghai. 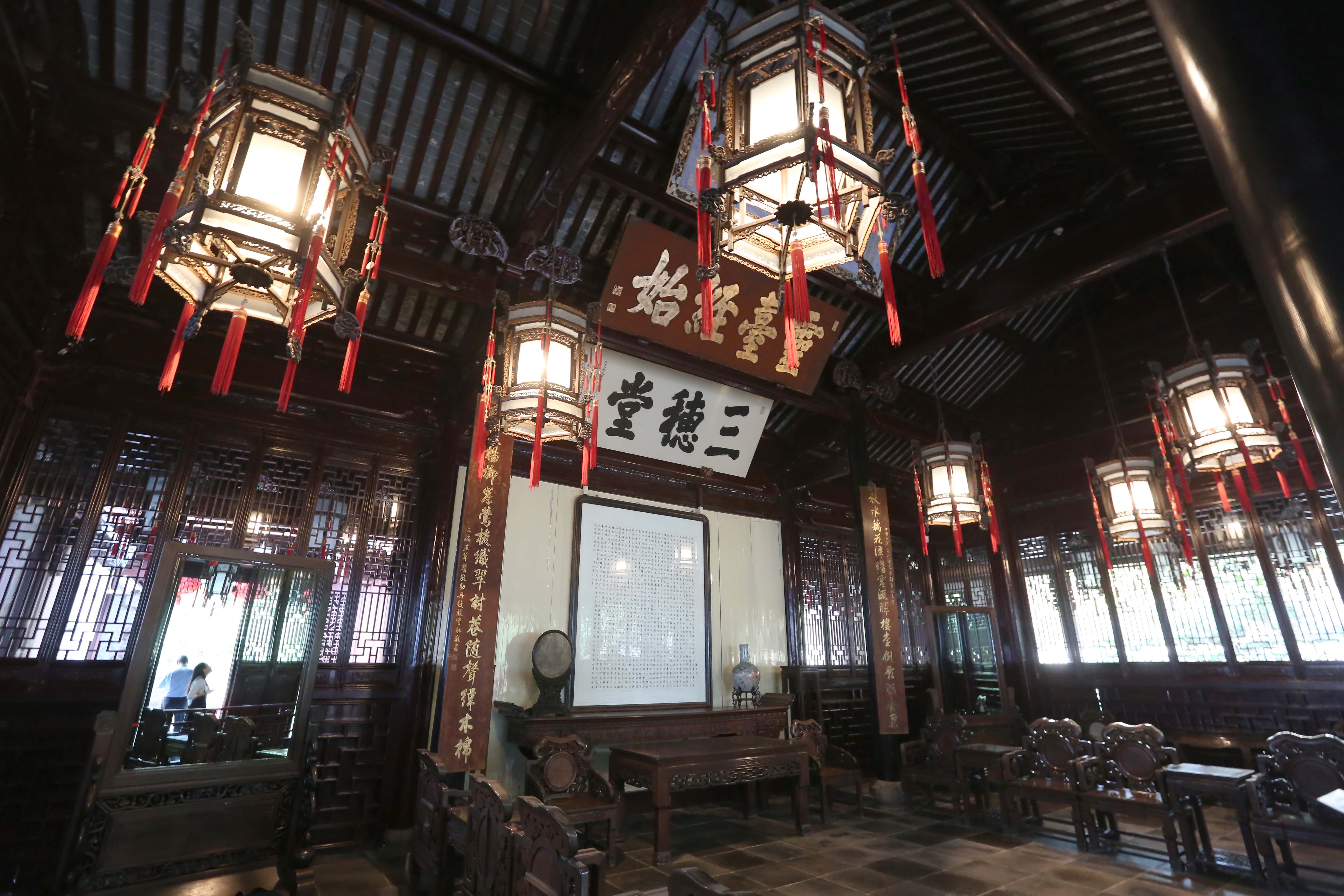 The Sansui Hall was used to hold official ceremonies and host gatherings of celebrities.

The Nine Zigzag Bridge leads to the main entrance of the garden, where visitors are first greeted by the spacious Sansui Hall. It was a place for holding official ceremonies, announcing imperial decrees and hosting gatherings of celebrities.

The window frames and beams of the building are delicately carved with patterns of corn, rice, wheat, sorghum, fruits, pines and cranes — symbolizing the wish for abundant harvests, good fortune, longevity and happiness.

Behind the hall stands the two-story Yangshan Pavilion, looking out over the Huge Rockery in the near distance and a pond in between. The rockery, almost 14 meters high, includes the largest existing yellow stone in the region south of the Yangtze River. There’s a winding path to the top of the rock hill.

Such rockeries were popular garden fixtures with the ancient Chinese, for whom mountains signified greatness, power and strength.

A pair of iron lions dating back to 1290 guard the corridor of the Yangshan Pavilion. At its end, past a narrow stone pathway lined with wisteria, is the entrance to the Huge Rockery. You can go up the hill or traverse through a cave underneath. It links to the Cuixiu Hall.

Out of the Cuixiu Hall, you walk into a small pavilion built upon a clear stream, where you can stop to watch the fat, well-fed goldfish. The nearby Chinese wisteria tree is more than 300 years old and blossoms with little white flowers in early spring each year.

A double-lane corridor connects the waterfront pavilion and Wanhua Hall, where ancient gingko and magnolia trees frame the front courtyard. The gingko is said to be 400 years old. Gingko trees typically grow in pairs: one male and one female. However, the “wife” of the Wanhua tree died 200 years ago, and a magnolia was planted in its stead. Locals call the tree the “second wife.”

A few steps away is the famous Dianchun Hall, once the headquarters of the Small Sword Society, a cabal of rebel soldiers dedicated to the overthrow of the Qing Dynasty. 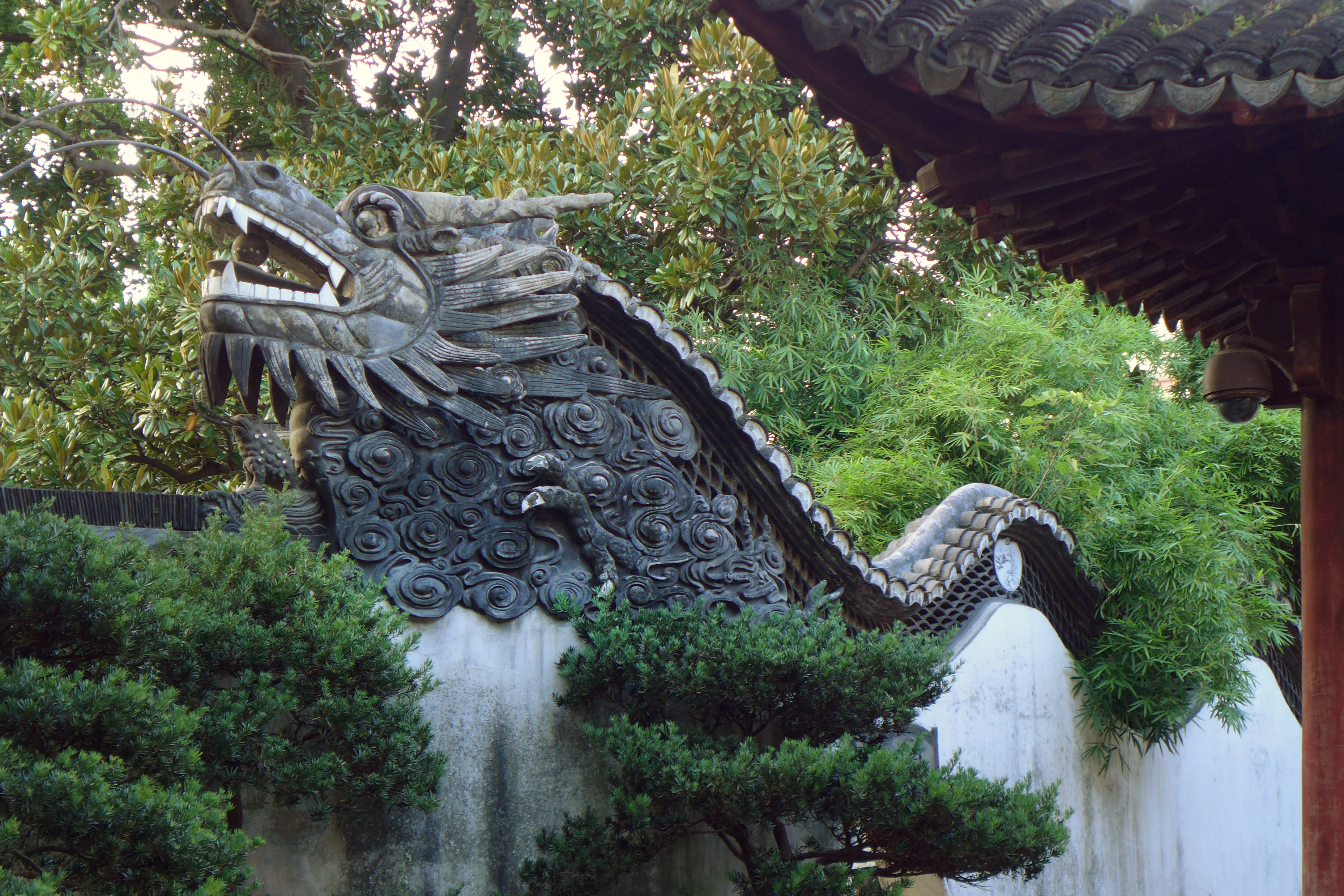 Some of the walls in the garden have the undulating shape of dragons.

To the west of Dianchun Hall lies the Dragon Wall. The head of the dragon has a fierce look, and its body covered with curved clay tiles.

Some of the walls in the garden have the undulating shape of dragons, too. There’s a sleeping dragon behind the Rockery, a dozing dragon in the inner garden and two dragons playing with a pear on the ancient stage.

The dragon was the exclusive symbol of the emperor in ancient China, and anyone else who dared use the pattern faced beheading.

According to one historical anecdote, someone with a grudge against the original garden owners reported to the emperor that the Pan family was secretly building dragon walls because they coveted the throne.

Fortunately, a friend of Pan’s in the royal court heard the complaint and alerted the family that an imperial investigation team would be dispatched. Pan removed the claws of each dragon in his garden, turning them into snakes. The family dodged a bullet.

In days of yore, the two-story Tingtao Tower was a perfect place to enjoy magnificent views of Huangpu River. Tingtao literally means “hear the waves.”

The tower displays beautifully carved ancient furniture, such as tea tables, desks and chairs. Most of the Ming-era furniture in the Shanghai Museum originally came from Yuyuan Garden. In addition, the tower today hosts art exhibitions.

Crossing the Sanqu Bridge, a wooden plank span with three twists, delivers you to Yu Lin Long, one of the three most famous rocks in the region south of the Yangtze River. The rock, which features countless holes, is considered the biggest treasure in Yuyuan.

According to the historical accounts, if you place an incense burner at the bottom of the rock, you will see smoke rising out of each hole, and if you pour a jar of water over the top of the rock, a myriad of streams will run out of the holes.

Opposite the rock is the Yuhua Hall, which Pan had specially built so he could better enjoy the view of the rock. The hall served as Pan’s study and was outfitted with a writing desk, a table, bookshelves, chairs and chaise lounges.

The ancient stage in garden’s southernmost corner is still in use today. Seven meters square, it is decorated with woodcarvings of lions, phoenixes and dragons, all framed in gold.

The roof dome, painted with 22 circles, 20 arcs and 28 golden birds with spreading wings, was designed to provide perfect acoustics. Audience corridors can seat up to 200. 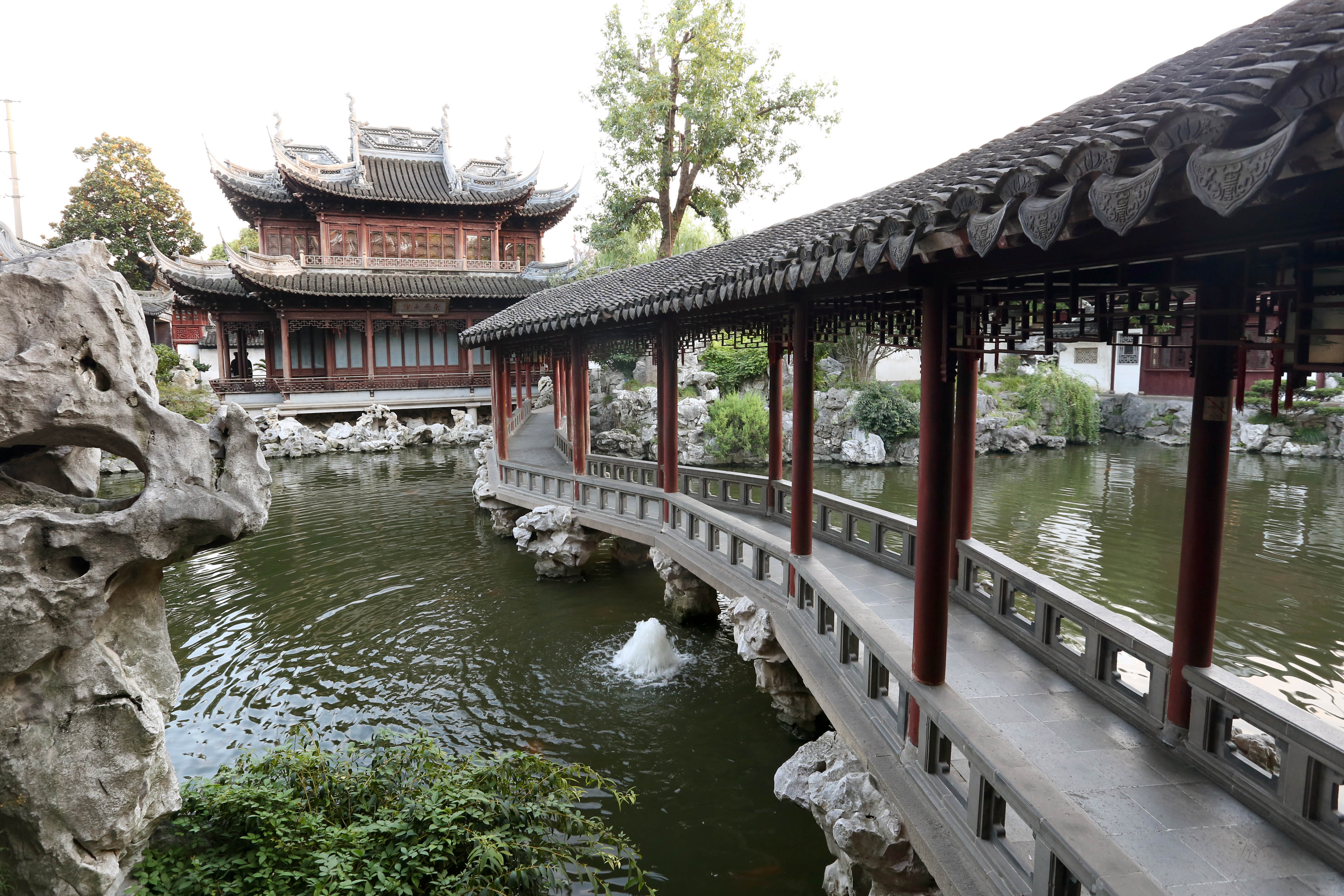 The Jiyu Corridor leads to Hanbi Tower which stands face-to-face with Tingtao Hall.