A touch of political history, the hush of tranquility 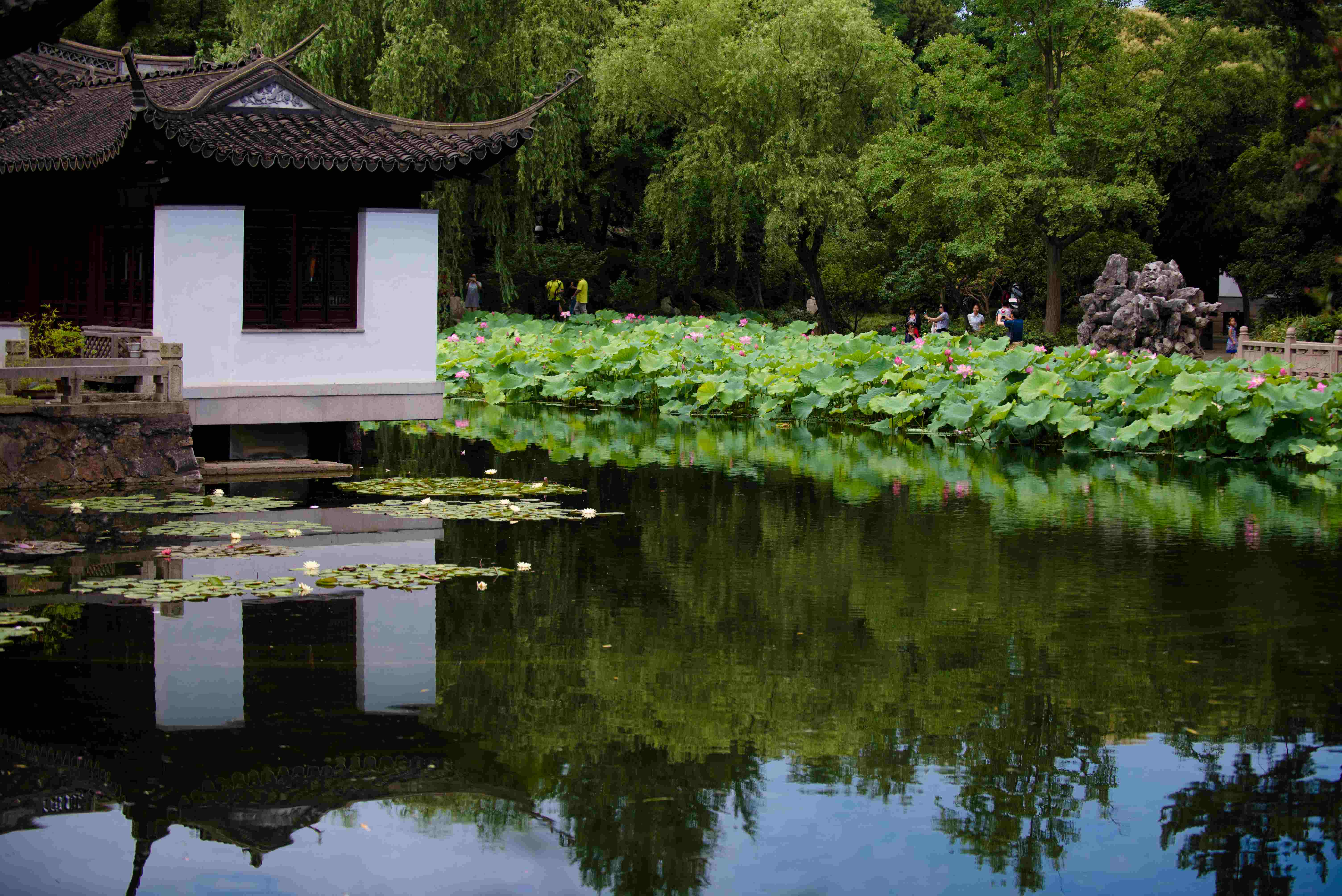 A classic Chinese garden traditionally was something more than just a pretty face outside a mansion. It was a statement about the inhabitants and their social status. It was an integral part of a family’s culture, providing areas for reading, entertainment, artistic endeavors and meditation.

In Shanghai’s northern district of Jiading, the town of Nanxiang is as famous for it gardens as it is for its steamed buns. During the Ming (1368-1644) and Qing (1644-1911) dynasties, almost 20 gardens were built here. They were famed for their simplicity, elegance and natural appearance.

It’s a site that’s easy to find, flanked by a noisy food street with popular steamed bun, or xiaolongbao, eateries. A whitewash brick wall shields the garden from the urban bustle.

The garden has been an oasis of tranquility since the reign of the Emperor Jiajing (1522-66), when it was built by a high-ranking government official named Min Shiji.

Over the centuries, the garden passed through many hands. It was renovated and expanded in different times as part of private residences. It was converted into a religious shrine and then a gathering place for political debate and entertainment activities.

Today it is a park open to the public. 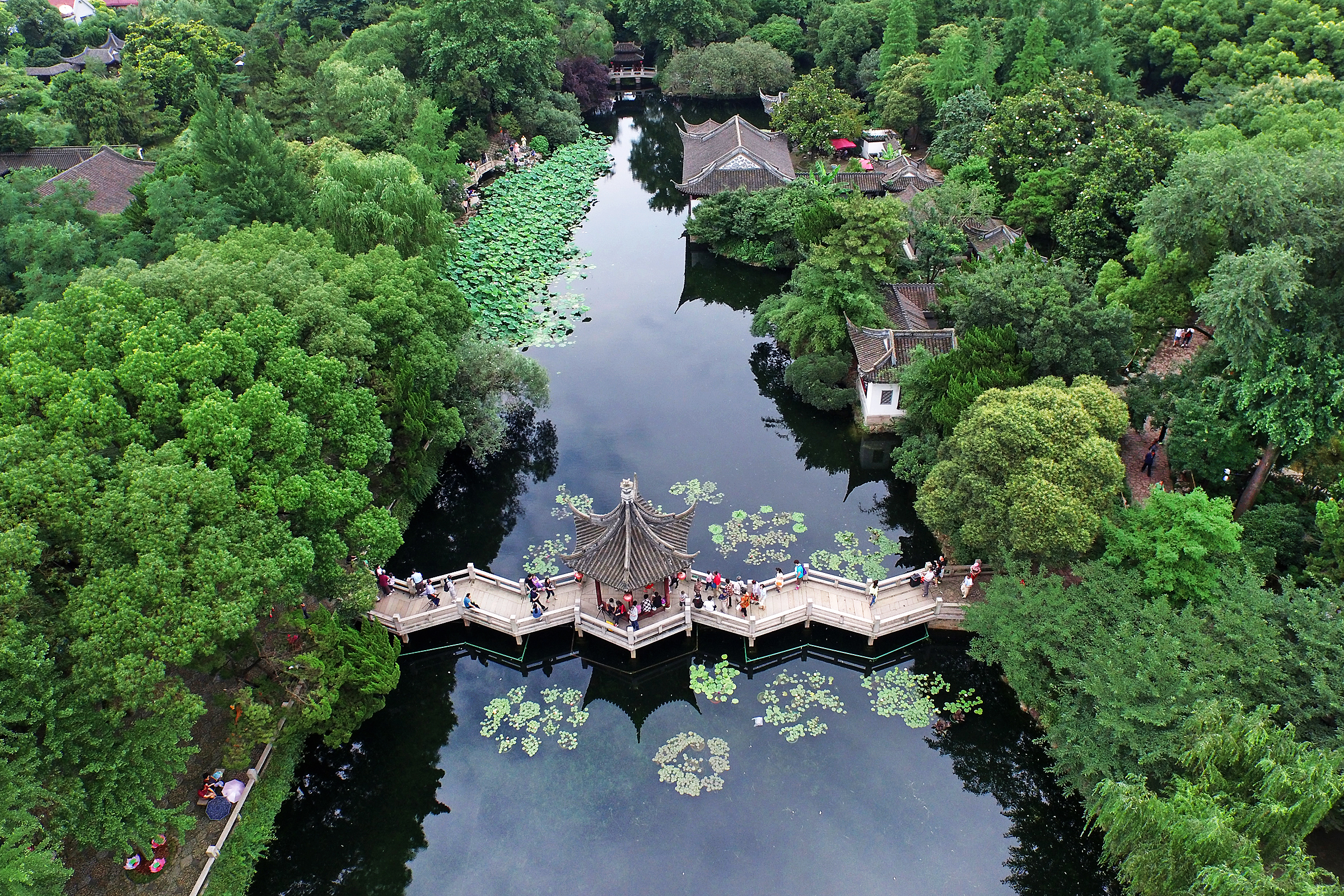 Over rippling Yuanyang Lake and across the Nine Zigzags Bridge, the old part of Guyi Garden unfolds. Quejiao (Lost Corner) Pavilion sits on Zhuzhi Hill. It is an example of the political overtones contained in some of the garden’s features. As you get closer to the pavilion, you will notice that the four-sided architecture is without a corner on the northeastern roof.

The omission was intentional. In 1931, when Japanese invaders occupied China’s three northeastern provinces, the patriotic Nanxiang people were outraged. Sixty local dignitaries donated money to build the pavilion, with the northeastern corner missing to express their grief over their “broken” country.

Weiyin (Small Voice) Pavilion is another structure tinged with politics. Built during the Republic of China (1912-49), the pavilion was once a gathering place where Nanxiang intellectuals met to criticize the Kuomintang and the civil war. Their voice may have been small, but it did enjoy social support at the time.

Other features in the old section of the garden date to the golden age of the Ming Dynasty. Though restoration projects were undertaken in the late 1980s, they were faithful to Ming-era style.

A few steps beyond the Quejiao Pavilion is the 400-year-old, beautifully carved Nan Hall, which was once a bedroom and study for a wealthy resident. The courtyard is decorated with bamboo, water lilies, plum trees and stone tables and chairs. It was also a favorite retreat for painter Liu Haisu (1896-1994) to do sketching in the 1970s.

Outside Nan Hall, a 10-meter-tall sutra pillar stands still, dating back hundreds of years. The upper part was struck by lightning in 1988. Luckily, another sutra pillar in front of the Weiyin Pavilion remains intact.

They are two of three such pillars still in existence in Shanghai, the other being in Songjiang District.

North past a bridge stone is Yuanfei Yuyue (Kite-Flying, Fish-Leaping) Pavilion. The round door looks like a big moon rising from the lake.

The Buxizhou (Anchorless Boat) Pavilion was once used by painters. It is reputed to be the best marble boat in Shanghai. Its name comes from a line in a poem by Tang Dynasty (AD 618-907) Bai Juyi, expressing the wish to escape the confines of reality and seek inner peace. The pavilion is surrounded on three sides by Xi’e (Goose Playing) Pond. It was a popular place for the garden owner and his friends to drink, paint and write poetry.

According to the local archives, the Anchorless Boat once served as a dining place where patrons ate xiaolongbao when Guyi Garden was designated the City God Temple during the Qing Dynasty.

South of the boat is the Fuyun Pavilion, made of bamboo in a unique architectural design from the Ming Dynasty. On the western bank of Xi’e Pond is the Baihe (White Crane) Pavilion, with the statue of a red-crowned crane on top, its wings batting to the south. That’s how the town of Nanxiang, which means “flying to the south,” got its name. 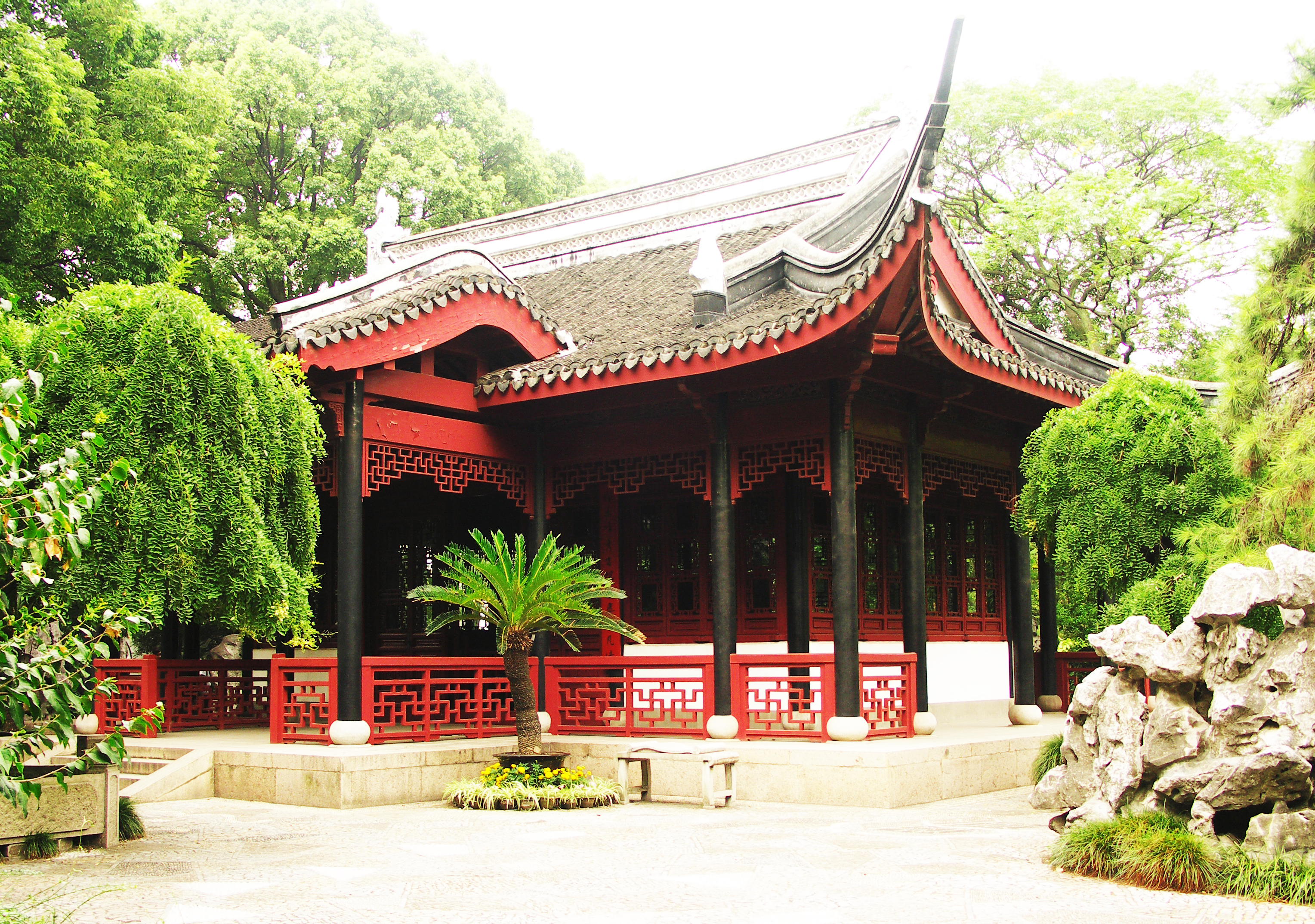 Yiye Hall, built in the Ming Dynasty, is the garden’s main hall, where distinguished guests were received and auspicious family events were held. The building’s four sides open and lead in all directions. In front of the hall, there is a dragon-claw pagoda tree dating back 480 years.

There were once two pagoda trees at the front gate. However, since pairs of the trees were allowed only in imperial gardens, one of the trees was chopped down to keep the emperor’s favor. Today, the remaining tree is the oldest of its kind in Shanghai.

North of Yiye Hall are five rockeries shaped like old men singing and playing the zither. Legend has it that they represent the five immortals of heaven, who travelled to earth one Mid-Autumn Festival and found the garden so beautiful and fragrant that they decided to stay.

The five were incarnated as deer running in the woods, a red-crowned crane standing on the top of the pavilion, a goose swimming in the pond, a white kite gliding over the lake and a dragon sleeping in the forest.

If rockeries and hills are the skeleton of the garden, waterways are its arteries.

A typical Suzhou-style garden is composed of four elements: water, rockeries, buildings and plants, with walkways and corridors connecting them to afford the best views.

Bamboo is the single most prevalent plant in Guyi Garden. In the new part of the garden, a bamboo park named Qingqing Garden was added in 1984. It displays more than 80 types of bamboo. The park’s Cui’ai Hall was relocated from the then Nanshi District (today’s Huangpu District) that same year.

The two-story brick hall features an ancient opera stage on the second floor. Its wooden roof is delicately carved with 100 birds and with two dragons playing with a pearl in the center. The arch of the roof was designed for maximum performance acoustics.

In 2009, a new bamboo garden was part of an expansion to Qingqing Garden, adding more plants, classic furniture and a memorial hall.

Another horticultural star of Guyi Garden is the peony, which mainly grow on the southern side of Yuanyang Lake. Two peony shrubs are said to be more than 100 years old. They are flanked by an array of colorful breeds.

A peony festival is held every spring in the park, featuring more than 2,500 shrubs and about 80 peony varieties. 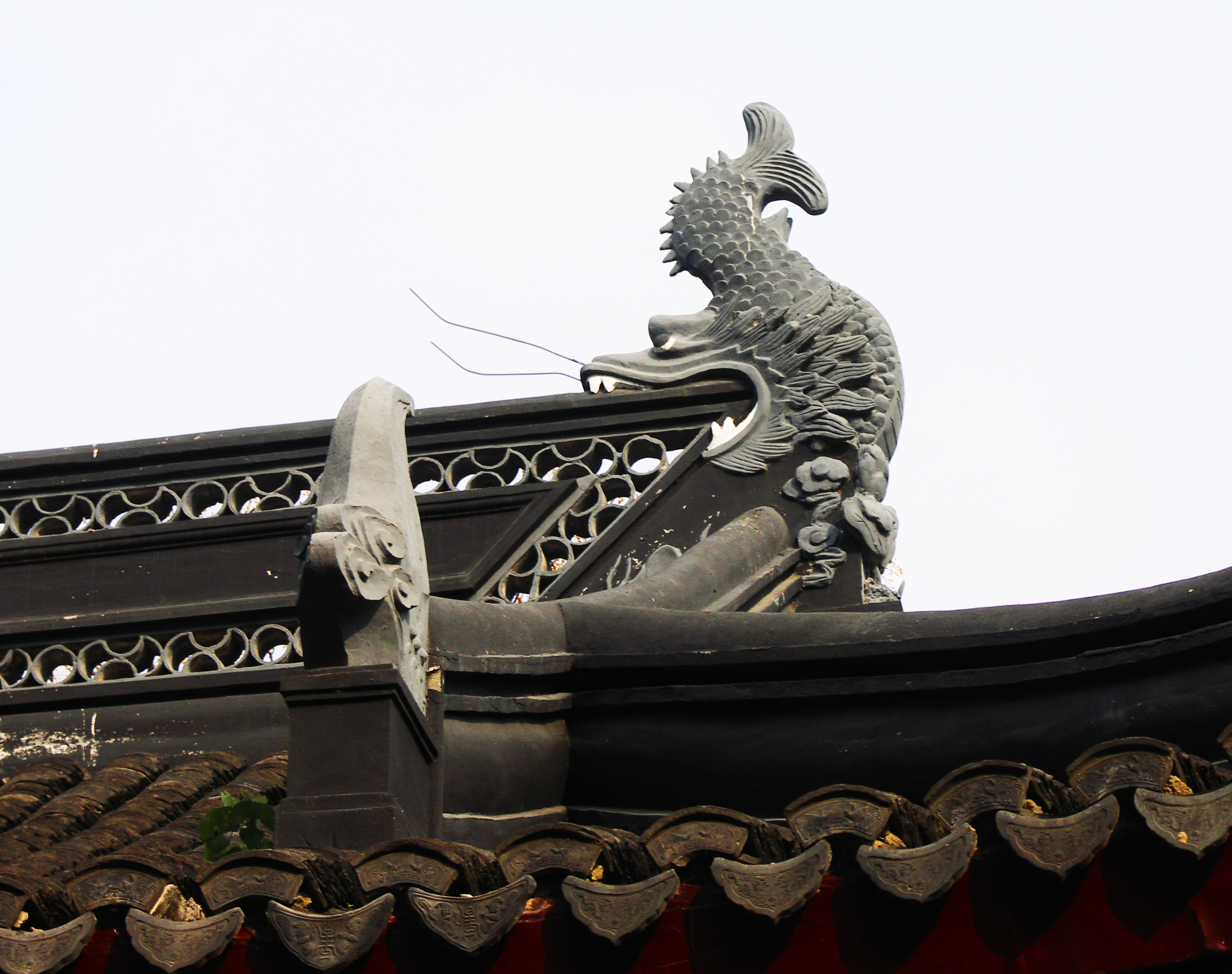 Rooftop ornament in the shape of a mythological animal’s main hall.