Garden creator an enigma, his legacy an open book 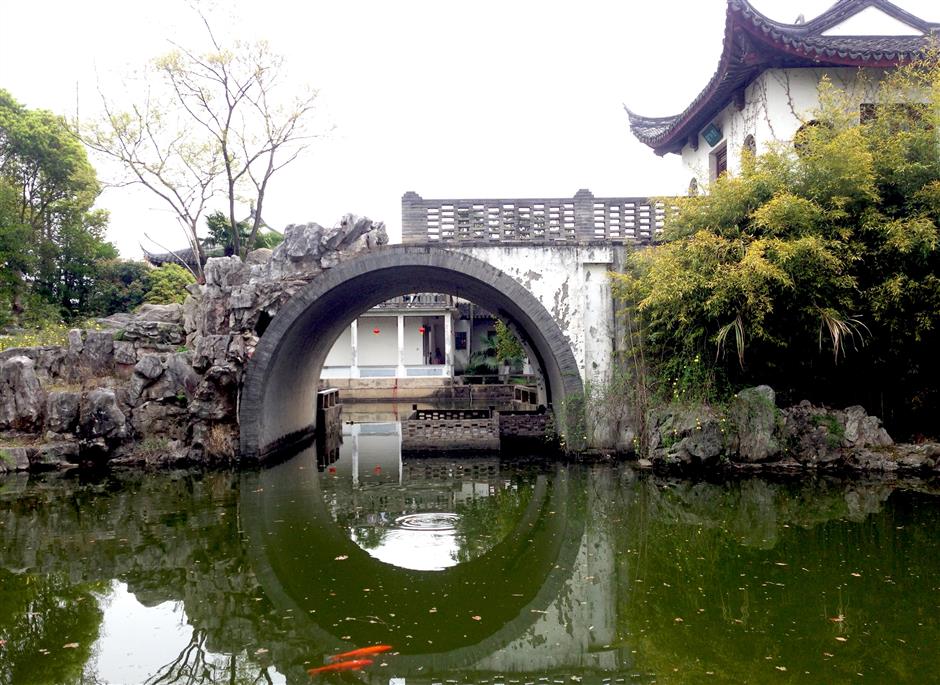 The arch-shaped stand is ideal for observing fish in Kezhi Garden.

More than a century ago, a businessman named Ma Wenqing moved from inland Jiangxi Province to Zhujiajiao Town in Shanghai to build a retirement mansion. It came to be called Ma’s Garden, or Kezhi Garden. Kezhi literally means “reading and plowing.”

Ma was something of a mystery. No one quite knew his origins, the source of his wealth or his reason for retiring to Shanghai, where he apparently had no friends or relatives.

The mystery remains, as does the beautiful garden that Ma left as his legacy.

Rumor had it that Ma traveled around the Yangtze River Delta, visiting Suzhou-style gardens to get ideas for his own arbor creation. Kezhi Garden has a scaled-down version of the Nine Zigzags Bridge in downtown Shanghai’s Yuyuan Garden, and the Upside-Down Lion Pavilion was copied from Suzhou’s Lion Forest Garden.

Work on Kezhi Garden began in 1912 and lasted on and off for about 15 years. It wasn’t quite finished when Ma died.

Located on a bank of the West Jingtinggang River, which traverses the ancient water town of Zhujiajiao, the garden is easy to miss. Its front gateway fronts on the river and is humble in appearance. In the old days, it’s said, Ma had musicians play drums and gongs so that visitors wouldn’t miss the site.

Behind the first court is a living room that was arranged with sedan chairs for gatherings. It is decorated with intricate carvings and paintings. The roof is built with two-layer tiles, which keeps the house warm in winter and cool in summer. Even the backdoor features finely engraved bricks that reveal the owner’s luxury lifestyle.

Beyond the living room is the recreational room, where Ma’s three daughters practiced the zither, played chess, did paintings and read. The wing room was reserved for embroidery work. Today, a granny quietly does needlework in the room, lending it an historic look. 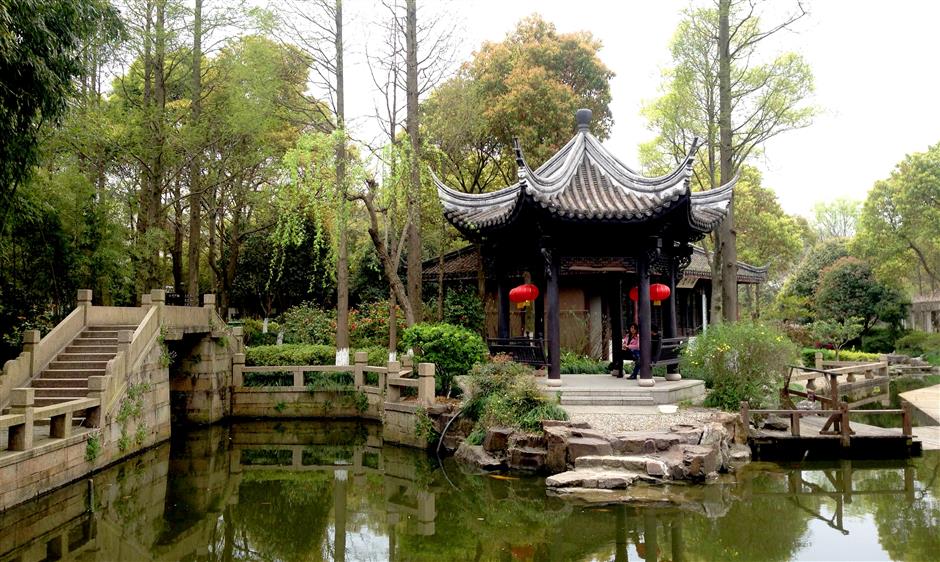 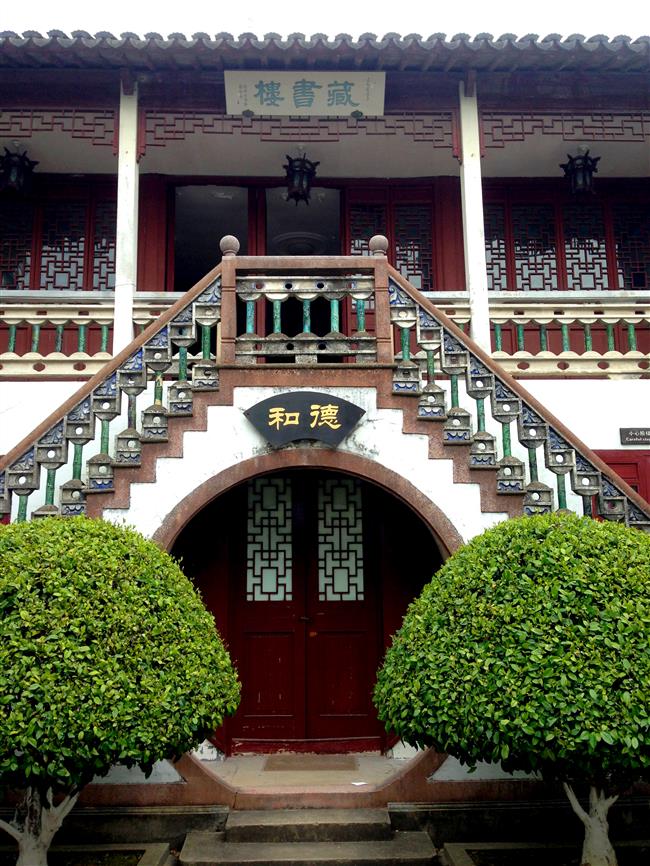 Further in is Yinggui Hall, which sits aside a pond with lotus flowers and a moon-shaped kiosk in the center. The hall features ceiling-high glass windows, and the tiled floors carve delicate patterns.

To the south of the Yinggui Hall lies a 20-meter-long corridor studded with 15 stone tablets, inscribed with the works of great poets, such as Wen Zhengming, Zhu Zhishan, Tang Bohu and Zhou Tianqiu of the Ming Dynasty (1368-1644).

It is rare to see so many precious collections in one private garden. One can easily imagine how proud the host would have been to receive his guests.

The corridor separates buildings to the north and a rockery area to the south.

The boulders come from Taihu Lake and are riddled with pores and holes from decades of water weathering — a standard for judging quality Taihu rock.

Beside the rockery are an opera stage and a small auditorium area, separated by lawn.

Ma was reportedly so sick in his waning days that he was unable to sit and watch his favorite traditional operas, so he opened the gate and let locals come inside to enjoy the shows. Ma, hidden in one of his more than 200 rooms, listened with enjoyment to the lively audience reaction from a distance.

Today, the stage is still in use. Last year, the famous Kunqu Opera “The Peony Pavilion” was staged there, accompanied by modern acoustics and lighting.

Kezhi Bridge behind the audience area is the smallest span in Zhujiajiao. Only 5 meters long, it leads to a forest area planted with century-old pines, fruit trees and flowers, including a 100-year-old wisteria.

A few steps away is the Baifu Pavilion, which takes its name from the 100 bats carved inside. The bat in Chinese culture is the symbol of happiness and longevity.

The pavilion sits on a rocky hill and faces a pond filled with goldfish. Visitors are welcome to feed the fish from packets that cost 1 yuan (15 US cents) each.

In the center of the pond, there is the Crystal Palace, a brick-laid arc pavilion where people can get closer to the fish and enjoy refreshing cool breezes.

Most visitors to the garden also tour all the sites of the old water town, drinking in the atmosphere of a bygone era. 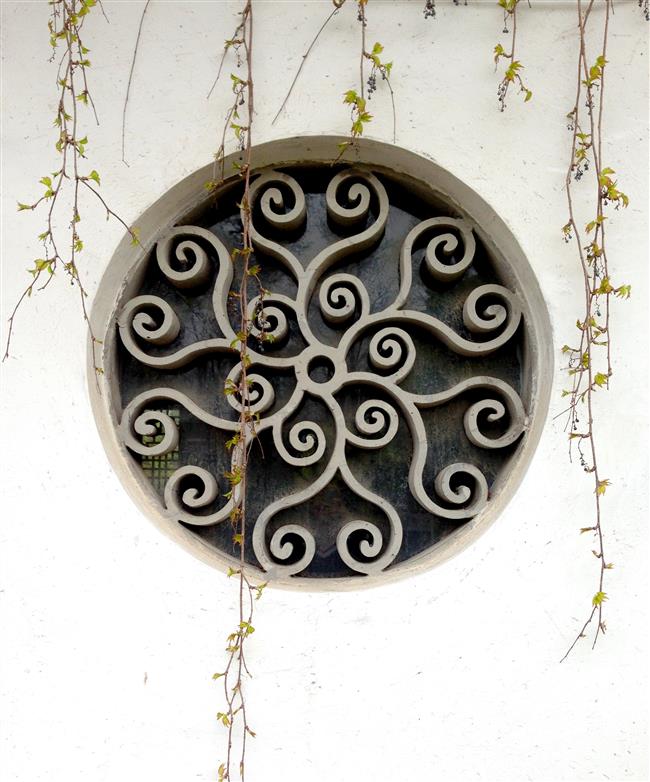 How to get there: Take the G50 Expressway and exit at the Zhufeng Road. Turn right on Zhuxi Road and then right again on Kezhiyuan Road.