Shanghai is a place where land is like gold. So, any patch of green for locals to enjoy amid the concrete forest is indeed very precious.

The city's "pocket parks," or parkettes, are not parks in the traditional sense, but small gardens and greenery areas dotted here and there on street corners, in industrial zones or among the towering apartment complexes.

Although they are small, they offer safe harbor for  people to relax and add dashes of color to the city.

Over the past five years, the city has added more than 60 gardens and small parks in communities, according to the Shanghai Greenery and Sanitation Administration Bureau.

Liu Yuelai, a professor with Tongji University, says pocket parks are the best solution to increasing the city's greenery.

"With the current density of population and buildings in the city, the pocket parks increase people's share of greenery," he said. "I hope that residents join in maintaining and improving the parks." 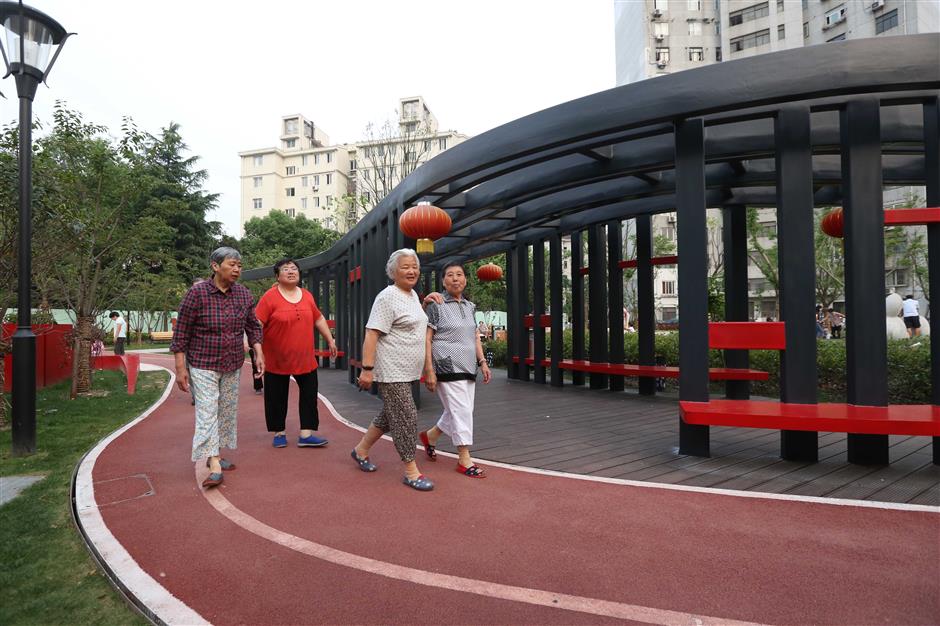 Senior residents at the No. 2 Residential Complex of Xinshi Road N. walk on the turf track in the pocket park.

In the Jiangwanzhen area of Hongkou District, the No. 2 Residential Complex of Xinshi Road N. (1501 Xinshi Rd N.) is nearly 30 years old. Until early this year, it drew constant complaints from residents ─ mainly because there was a jellyfish-processing plant in the neighborhood that affected the environment.

After the plant was removed, the area was redesigned by the Landscape Engineering Design Institute of Tongji University, which completely transformed the space.

The 2,300-square-meter rectangular area is bordered by a light green wall on one side and rust-colored fences on other two sides. The remaining side is completely open, with an artificial turf track starting there.

Tall trees grow on the outer ring, while bushes and flowers are in the middle. Among the plants are three recreational areas. One is a small corridor decorated with lanterns, while the other two are equipped with black-and-white benches. 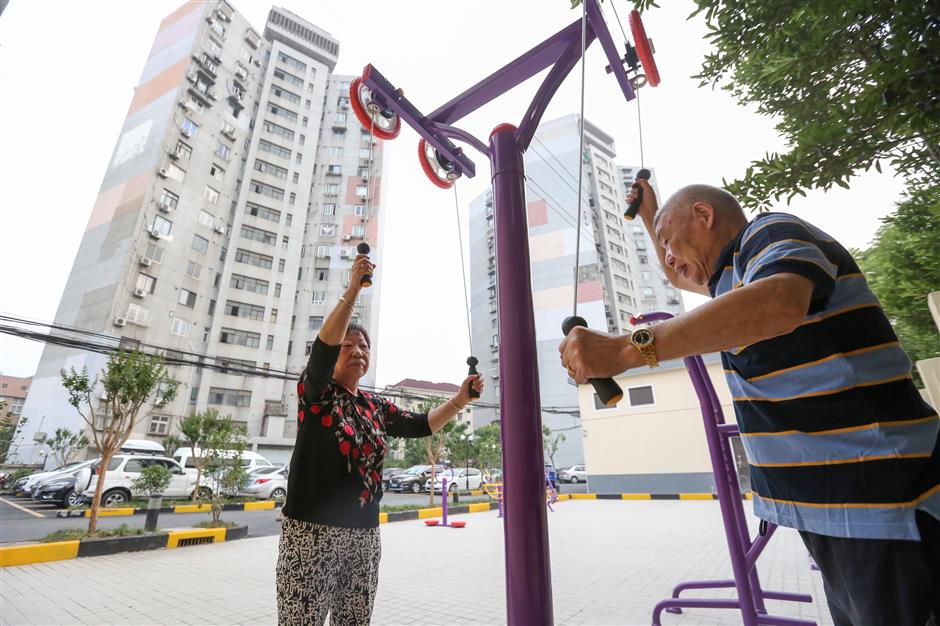 Elderly residents enjoy the fitness equipment at the open space. 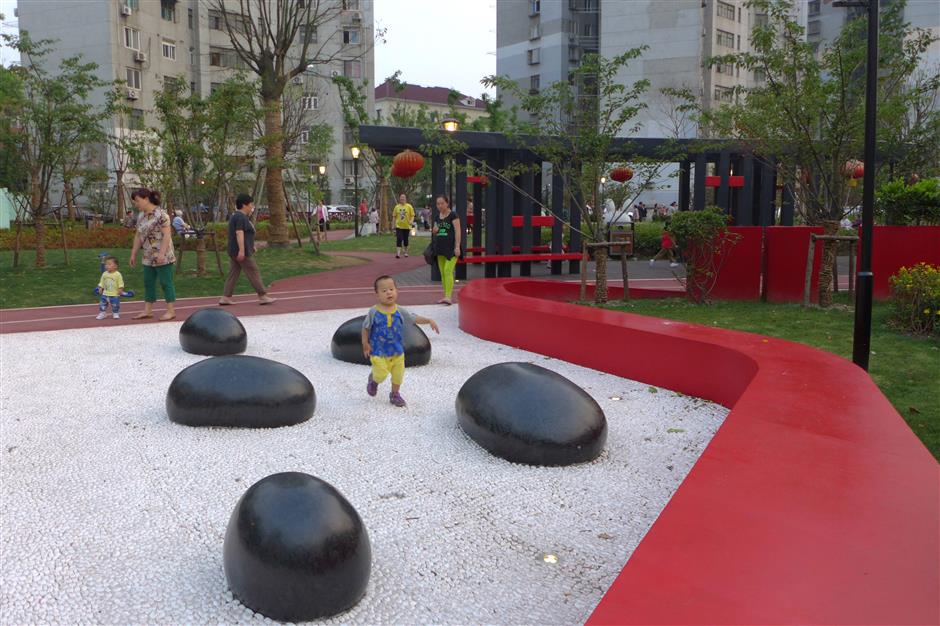 For locals, it's a welcome change.

Gu Jiao'e, 90, used to walk for 20 minutes to Jiangwan Park for recreation and exercise, and her family always worried she might have an accident on the way. Now, she can enjoy her time just below her apartment building.

Young people prefer to walk dogs, or children, or just jog on the track.

"This has become a new social venue for the residents," says Lin Ying, a white-collar worker living nearby.

Lin, hailing from Jiangxi Province, usually jogs in the pocket park every day after 7:30pm.

"I like Shanghai for its good balance between a fast pace and a slow lifestyle," she says. "Although there are skyscrapers everywhere and people on the streets are often in a rush, I feel relaxed and easily calm down once I come here.

"I also managed to make new friends (in the park) and we now encourage each other to keep fit," she adds. 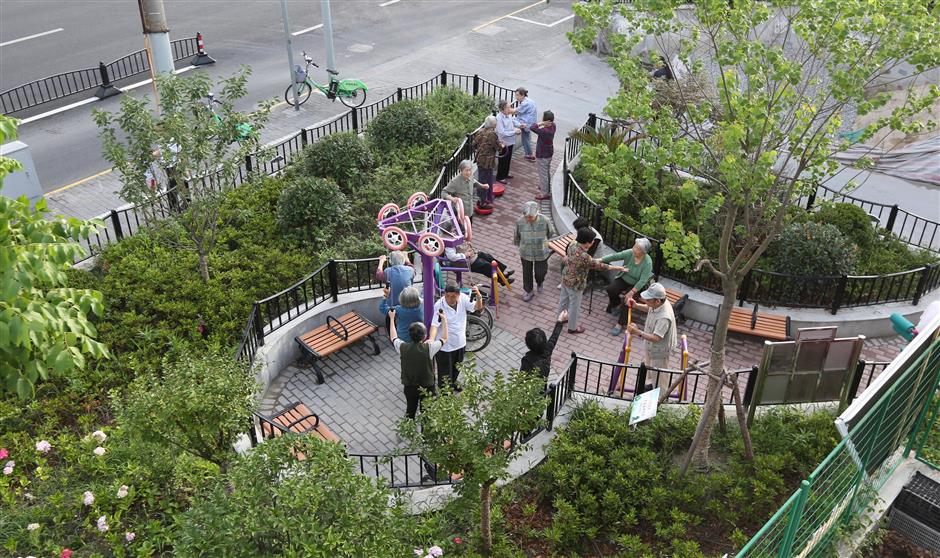 People socialize and relax at the Caojiajie Garden.

The green area doesn't actually have an official name. It is a garden area at the corner of Fuxing Road E. and Zhonghua Road in Huangpu District, near Caojiajie Lane.

For the past decade, the small piece of land where the garden is now was occupied by a two-story building. Not long ago the building was identified as an "illegal structure" and was torn down and replaced by the mini-park.

Residents welcomed the idea as it not only provided greenery but a new space to bond with each other.

People living in Caojiajie Lane are mostly elderly. They cherish their time with old neighbors they have known for decades.

Now in the garden, with passageways lined with fitness stations, seniors can exercise, stroll, or just sit and chat.

Occupying only about 500 square meters, the area quickly became a favorite spot and locals named it "Caojiajie Garden." 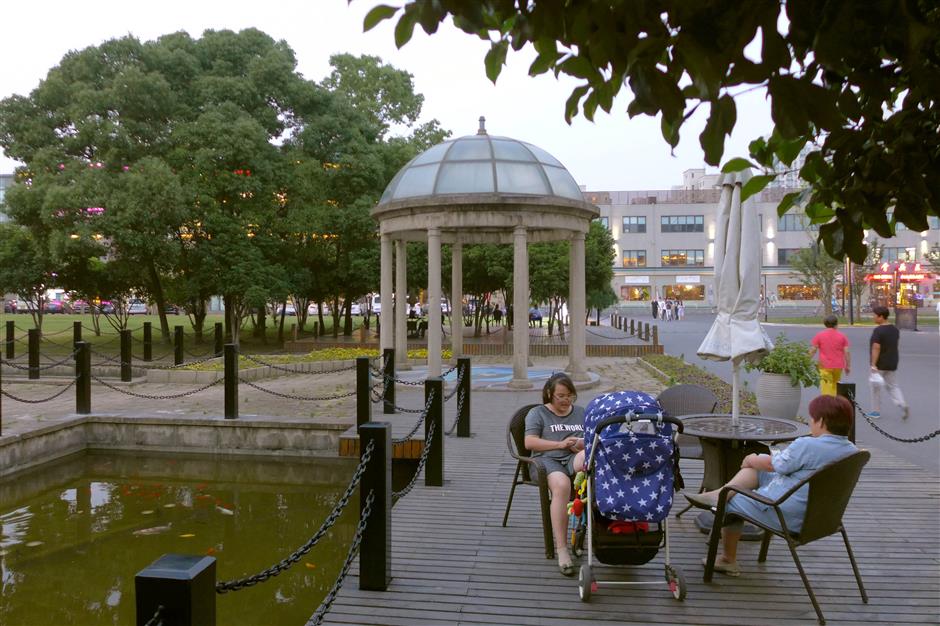 Workers at the Changyang Valley, as well as residents living nearby, enjoy the green space. 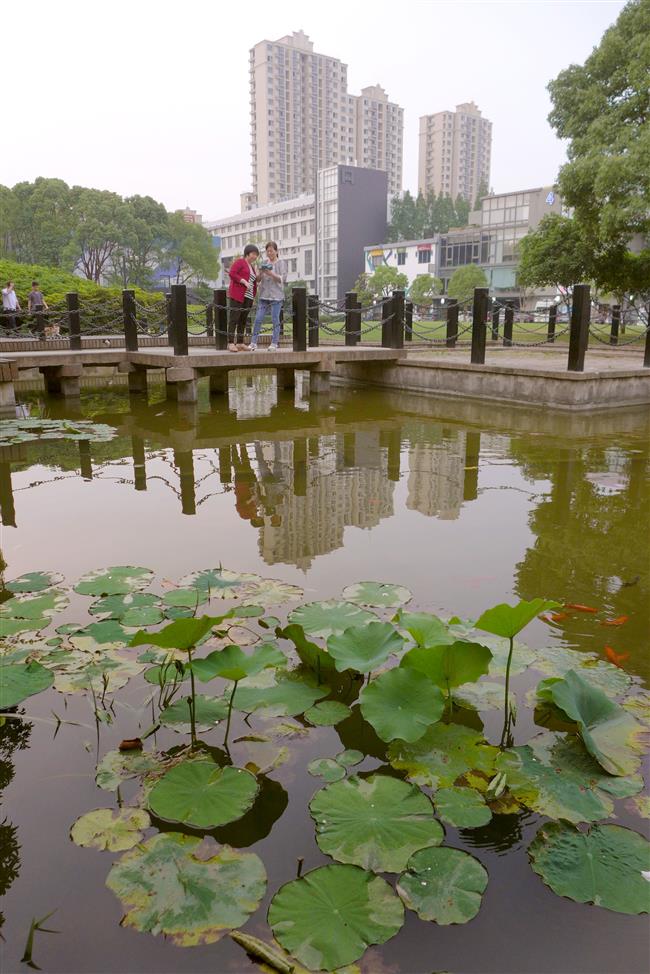 Green area in a creative zone

The central greenery area in Changyang Valley (1687 Changyang Rd), a creative industry zone in Yangpu District, is about the size of a standard soccer field.

The zone, originally the Donghua Cotton Mill founded by the Japanese in 1920, is now home to six companies, including French retailing group Auchan and Florida-based automotive consultant company Future Power.

The green space benefits workers as well as people living nearby. A huge lawn provides good space for companies to hold outdoor activities, while a tiny forest and pond create a place to release stress.

"The area is my favorite place here," says Jennifer Chen, a worker. "I love to walk on the lawn after lunch to do a little sunbath, and sometimes if I have time, I roam around the pond to take a break."

With the campaign to demolish illegal structures going on in the city, more spaces are available to be redesigned as pocket parks.

On Fuxing Road M., a new lawn was completed recently. Two interesting sculptures of two men mowing the lawn and plowing the land are quite eye-catching. The sculptures won the gold prize in a competition carried out by the Shanghai Botanical Garden.

In Hongkou District, a small garden was built on Zhongshan No. 2 Road N. The flower frames shading the benches form colorful views.

In the Tangjiata area ofn Yangpu District, more than 1,000 families welcomed the first pocket park in the community this year. The flower bed contains five types of flowers that will provide a feast for the eyes throughout the year. 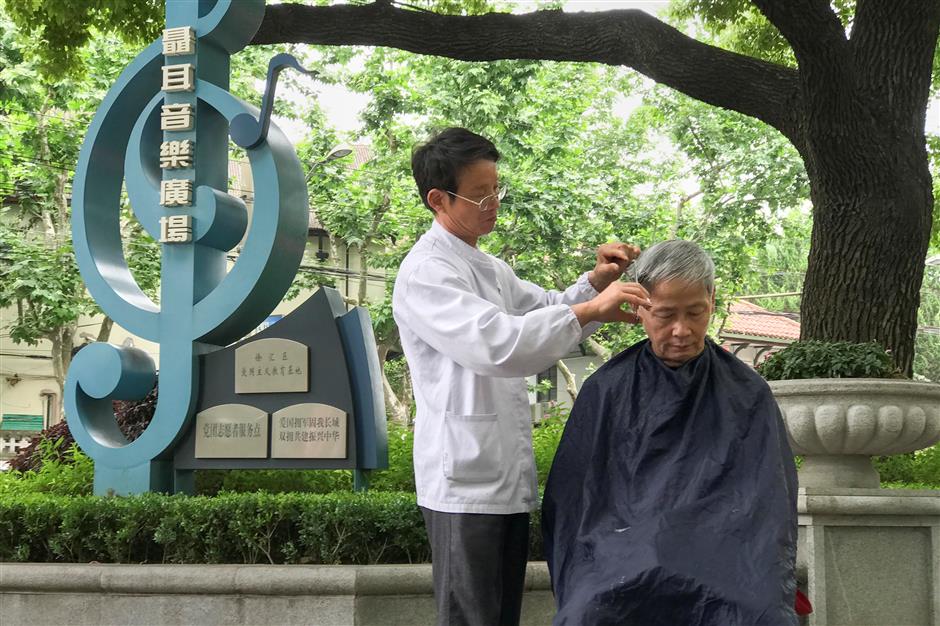 An elderly man has his hair cut at the Fuxing Road M. parkette. 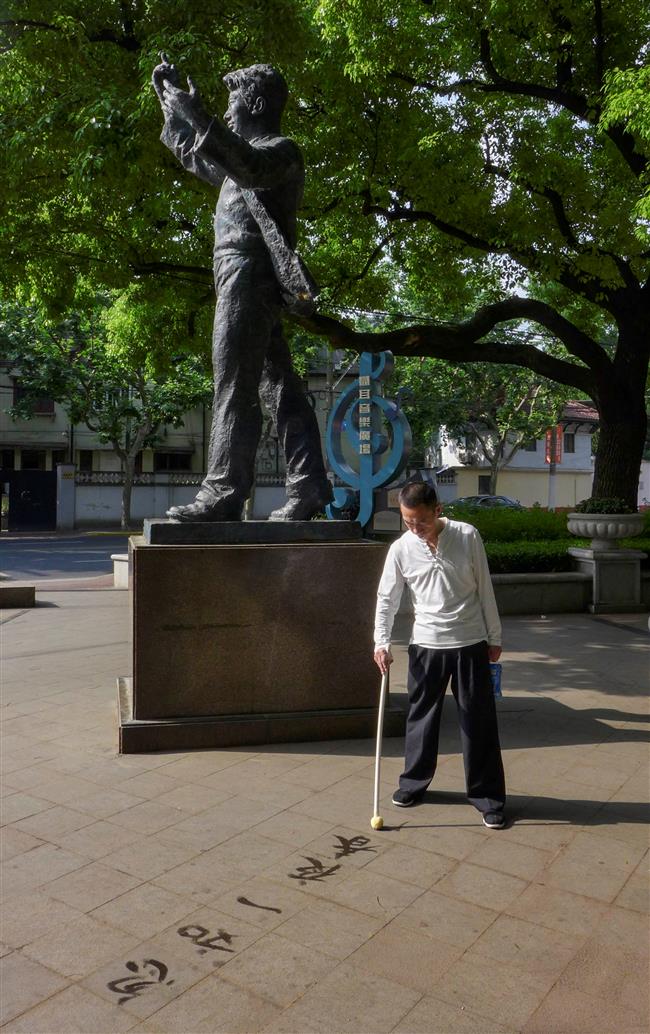