Xiamen, a favorite destination for hipsters 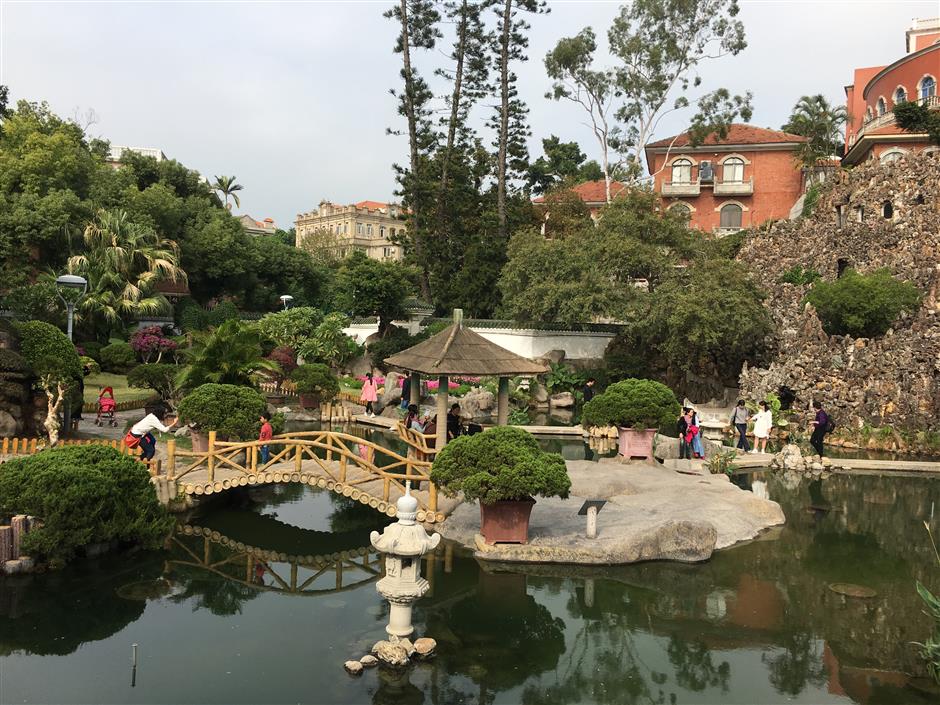 The coastal city of Xiamen, in southeast Fujian Province, has long been a favorite destination among Chinese hipsters, who have playfully been christened as wenyi qingnian.

The city, with a rich and diverse cultural charm, is home to some of the most influential litterateurs and musicians in modern China.

The well-renowned Xiamen University has fostered veteran writers such as Lin Yutang and Lu Xun, both considered pioneers of Chinese contemporary literature.

Gulangyu, China’s famed “piano island,” is undoubtedly the city’s top travel destination. It was listed as a World Cultural Heritage Site by UNESCO this year. The island is home to some of the nation’s most influential Chinese musicians such as pianist Yin Chengzong.

The island also plays host to China’s largest piano museum, with a huge collection of antique pianos, especially the oldest which is more than 200 years old. The piano ownership per capita of this small island, around 1.78 square kilometers, ranks No. 1 in China.

Xiamen has a long shimmering coastline, which inspires bloggers and independent designers to share their beautiful moments.

“Xiamen is small, so its diverse natural and cultural landscapes in the picture look dense, with layers,” says Li Shixiong, a lecturer on photography at the School of Journalism and Communication in Xiamen University. 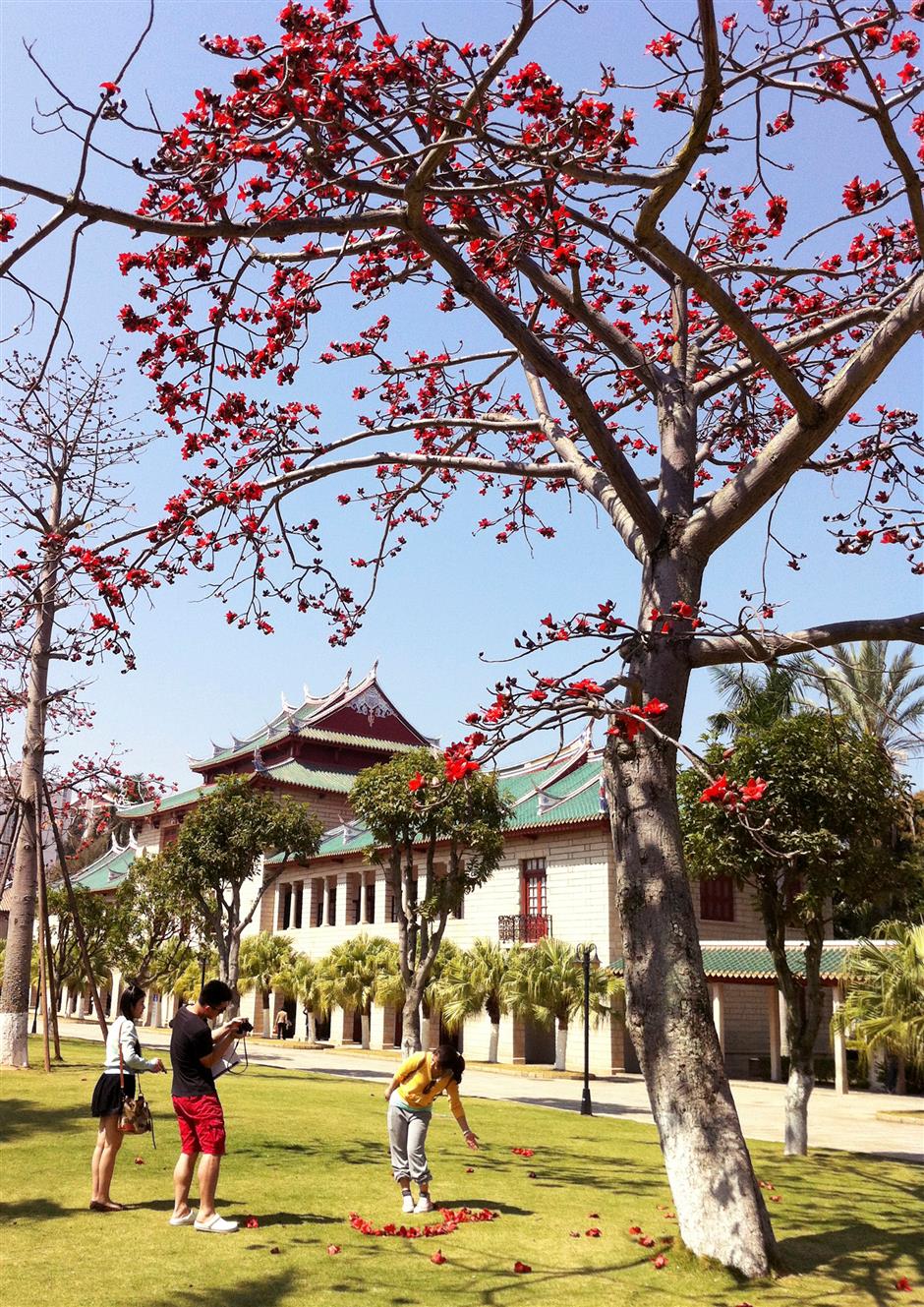 Students enjoy a beautiful day on the campus of Xiamen University. 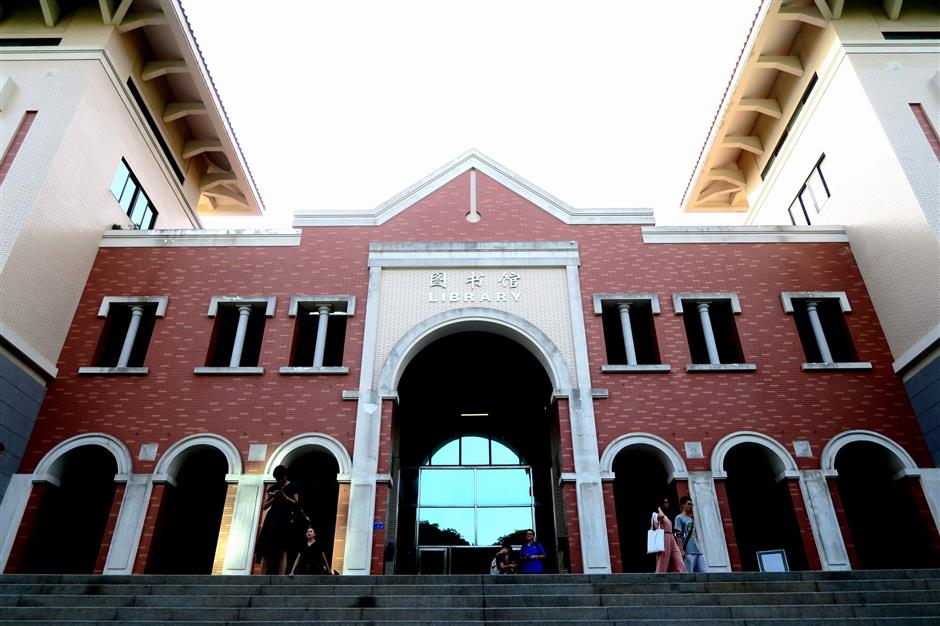 The Library of Xiamen University features an East-meets-West style. 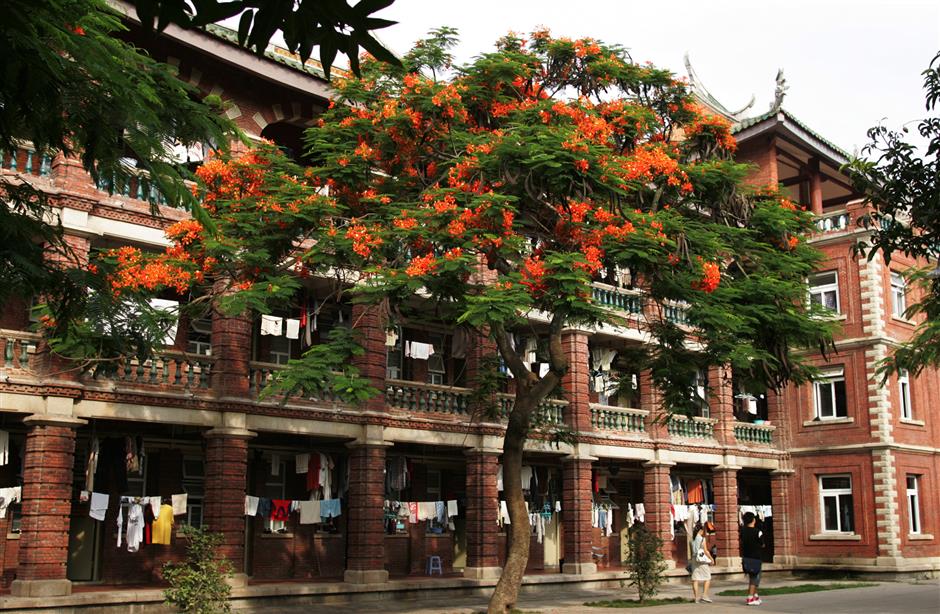 Kapok is in blossom in front of the dormitory building at Xiamen University.

Xiamen University, the star of literature and architecture

The university’s main campus, surrounded by the bay in Siming District, southwest of the city, is known as “one of the most beautiful universities in China.” It faces the sea, with mountains at its rear, and is adjacent to the glorious South Putuo Temple, built in the Tang Dynasty (AD 618-907), one of the most attractive temples in South China.

The campus, founded in 1921, is surrounded by thick diverse plantation thanks to Xiamen’s subtropical weather. The trees are tall and exuberant, especially the banyan trees, a plant whose seeds can germinate, spread and grow on other saplings and forestry shrubbery.

According to lecturer Li, the most beautiful scene is on the Qingming Festival in early April, when a vast red expanse of kapok is in blossom.

Travelers are recommended to visit the campus as early as possible in the morning as there are no crowded travelers taking pictures at the time but only students rushing to classrooms on bicycles.

The dormitory building is eye-catching and the balconies are often filled with colorfully aired clothes, revealing the latest fashion trend.

Old architecture traced back to the 1920s is a highlight of the campus. Its style is named after the university’s founder Tan Kah Kee, a philanthropist who was active in Southeast Asia.

The Tan Kah Kee style features a European-style main building with a traditional minnan-style roof, such as swallowtail and saddle roof. Minnan is a region mainly referring to southern Fujian Province.

Tan once said that such a design, with Chinese style on the top, expressed cultural confidence.

The history room showcases some of the school’s most famous graduates and professors, highlighted by author Lu Xun (1881-1936), a leading figure of modern Chinese literature who taught Chinese here; Lin Yutang (1895-1976), famous Chinese writer and linguist known for his English bestseller, “My Country and My People,” who was also a professor at the university.

Don’t forget to sit by the lakeside in the center of the campus to see the black swans and egrets before leaving. 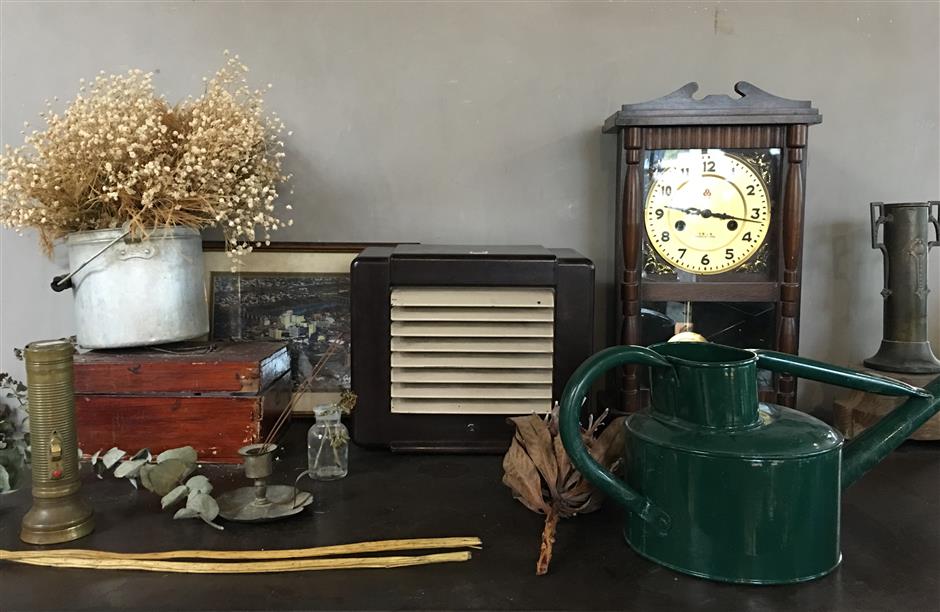 The Vintage shop Goodone is filled with old furniture, vases, telephones and typewirters, bringing visitors back to the early 20th century.

Hanging around the vintage shops is part of local people’s favorite weekend pastimes. The most famous shop Goodone, once a factory, is located in a 1,000-square-meter space.

The owner, Yang Hanjing, spent five years sourcing various old artifacts from the junkyard and construction sites, some of which date back over 100 years.

The space is filled with old furniture, vases, bicycles, telephones and typewriters, bringing guests back to the early 20th century.

The tile, which originated in Europe, was introduced to Xiamen 100 years ago when wealthy people built their own mansions. The craft of making the tile has now almost disappeared due to its intensive labor element.

Yang has collected over 75,000 old tiles and made a series of creative products, inspired by the old flower patterns, which are on canvas bags, brooches and notebooks. There’s also a huazhuan museum in the city center, where you can enjoy some vintage art with a cup of coffee. 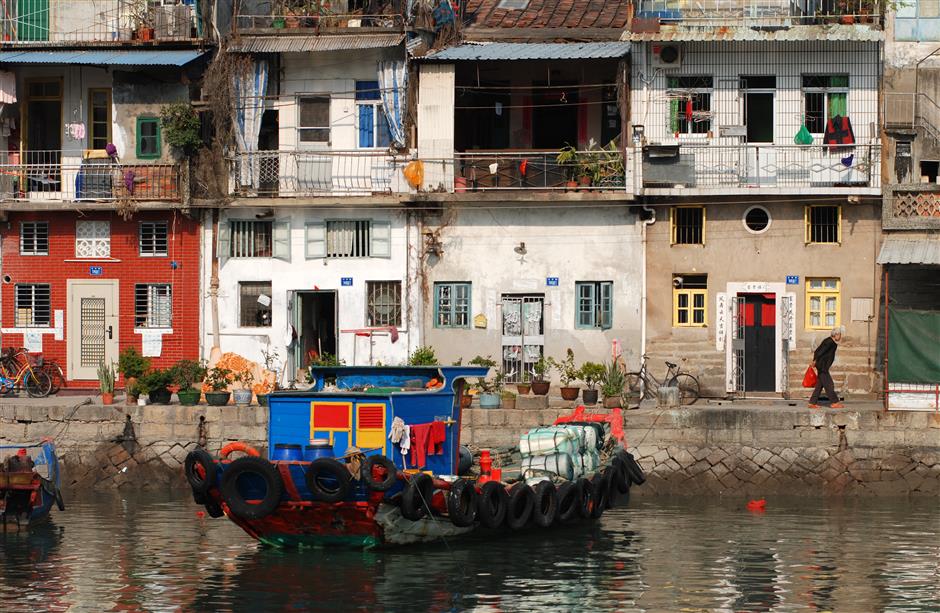 Lined boats are still anchored, but not in use, at Shapowei which used to be a fishery harbor.

The vintage tour can be continued by roaming around Shapowei (literally “at the end of the sandy beach”), a new cultural landmark favored by hipsters.

Shapowei was a fishery harbor. Nowadays, lined boats are still anchored but aren’t in use. Colorful boats, together with historical seaside brick houses, construct one of the most beautiful sunset scenes in Xiamen.

The vintage shop Buchuo Old Stuff Shop (不辍旧物馆) deserves a visit. The name literally means “never stop collecting old things.” It’s a place where you can satisfy your curiosity and rediscover your childhood.

Standing at the entrance is the owner’s huge collection of old road signs and a vintage barber’s chair.

The space is highlighted by old-fashioned goods, from an abacus to a door plate, a lamp to a suitcase, a cosmetic mirror to a wardrobe and a sewing machine to a pastry mold.

For art lovers, there is the Gallery of Chinese Profiles, known as the gallery closest to the sea in China. It used to be a local fishery wharf building.

The harbor occasionally holds day and night markets on various themes, where local designers and craftsmen exhibit and sell their works.

You can either take a direct flight to Xiamen from Shanghai, which takes about one and a half hours, or spend eight hours on a high-speed train. 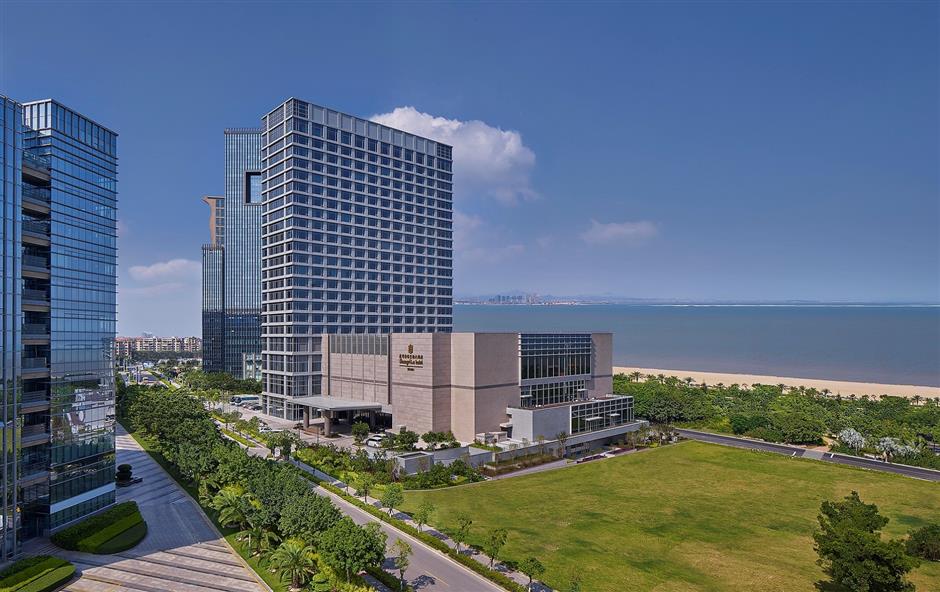 Shangri-La Hotel, Xiamen is located at the seaside.

Where to stay and what to eat

If you want to experience authentic local culture and lifestyle and aren’t particular about a luxury hotel service, then bed and breakfast is ideal, and most of them are at Gulangyu.

For those wanting a higher standard service, with English-speaking staff, an international hotel chain is a safer choice.

The newly opened Shangri-La Hotel, Xiamen is recommended. It is located in Guanyin Shan, the city’s CBD area, near the shopping malls and exhibition center. It is a 20-minute drive from the airport.

More importantly, the hotel is at the seaside, with more than half of its spacious rooms embracing ocean views. The hotel has designed for guests a 20-minute morning run route along the beach.

The hotel’s Chinese restaurant, Fu Gong, serves Fujian cuisine highlighted by kezaijian (a local oyster omelet); shacha noodle (noodle soup with shrimp, sesame paste, chili, garlic and herbs) which tases spicy, rich and aromatic; and the famous stewed soup fotiaoqiang (Buddha jumps over the wall), in which various seafood, ham and pork tendons create a distinctive appealing rich and umami flavor. The dish’s name is an allusion to its flavor, which once upon a time enticed vegetarian monks to try meat-based food.

Guests preferring casual dining can move to hotel’s lobby, where its outside balcony serves shaojiupei (baijiu pairing with food) in the evening, a local distinctive supper style. The chef prepares various small dishes, dominated by grilled seafood, which goes well with baijiu (a distilled spirit). 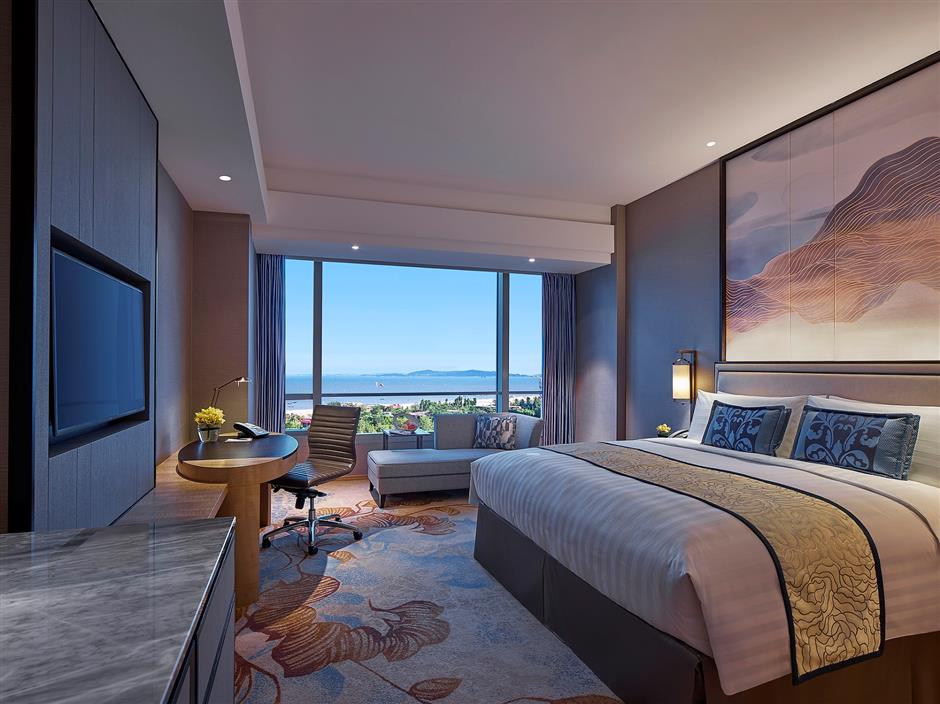