There is only one way and that’s up. A visit to Huashan Mountain, with its narrow trails, steep cliffs and deep abysses, is a test of strength, stamina and willpower. But the rewards far outweigh any inconveniences.

The mountain is about 120 kilometers from Xi’an, capital of the northwestern province of Shaanxi. It is the westernmost of the Five Great Mountains of China. It is also regarded as a cradle of Chinese civilization.

The mountain comprises five peaks, which taken as a whole resemble a lotus flower. Each summit is distinctive. East Peak is ideal for watching the sunrise; South Peak has the highest altitude at 2,155 meters; West Peak is considered the most elegant; North Peak is famous as Cloud Terrace Peak; and Middle Peak is also called Jade Lady Peak.

South Peak, considered the birthplace of Taoism, has more than 20 temples. These granite summits, standing between heaven and Earth, have long been a symbol of power and vigor.

It wasn’t until the Tang Dynasty (AD 618-907) that Taoism became popular and people started to construct a trail along the northern slope of the mountain and built temples.

But the sheer cliffs and overhanging rocks limited the ancient Chinese to forging only one mountain trail, winding from the bottom to the top and linking the five summits. Even today, the trail is considered one of the most dangerous hikes in the world and is often called death-defying. 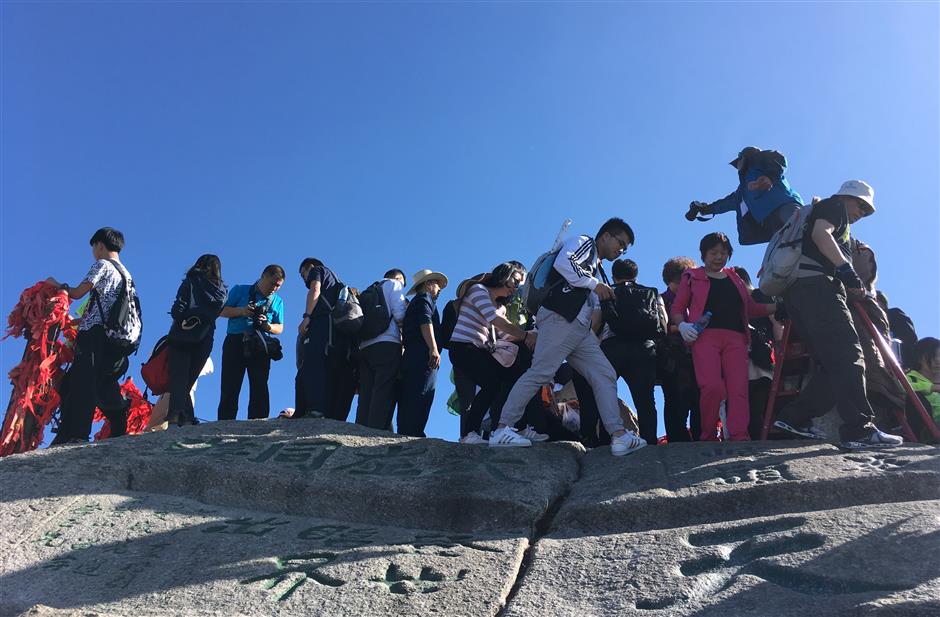 Tourists reach South Peak, which has the highest altitude at 2,155 meters. 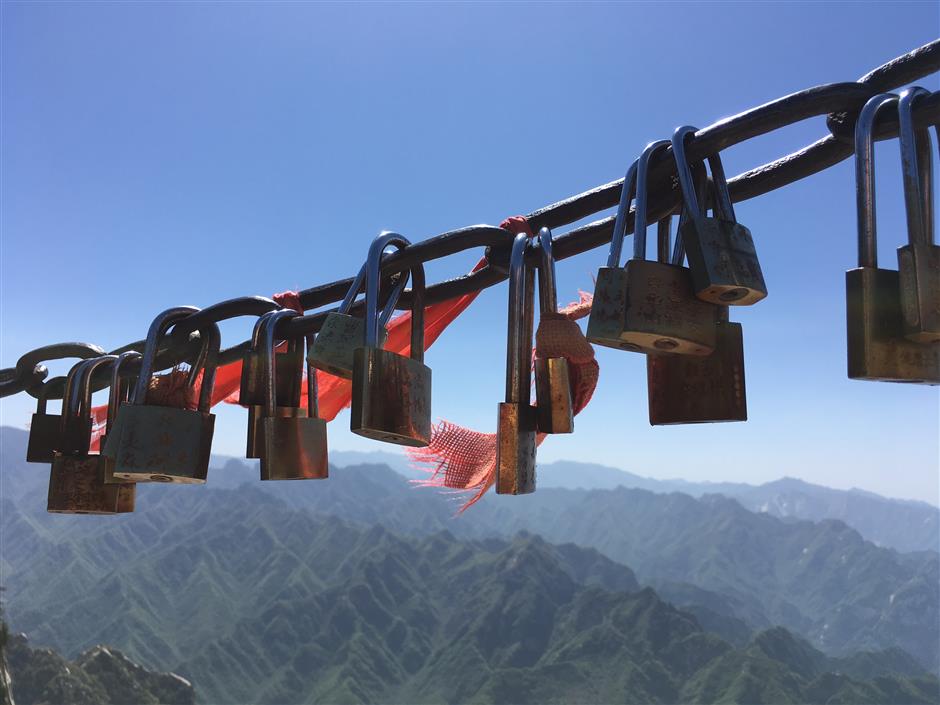 Locks holding blessing messages are everywhere on the top of Huashan Mountain.

But I was undaunted. I set off from the western side of the mountain on a sunny afternoon. My original plan was to reach the top of 2,028-meter-high West Peak, take a quick look around, then double back down from the summit.

“Take your time,” I told myself. “There’s no hurry. Enjoy the scenery.”

What I didn’t know about was a mountain weather alert for strong winds later in the day.

Everything looked so tranquil and perfect at the start. I am no climbing ace, so I chose the west-line cable car to get me on my way.

On the 20-minute trip, the cable car bounced precariously in the cross-currents as it brushed past big rocks. I wasn’t heartened by rumors that it was like “cliff jumping if the cable car suddenly malfunctioned.”

I alighted from the car with my heart beating rapidly. However, the rest of the way up West Peak was quite an easy climb.

The summit is a huge rock shaped like a sharp knife abruptly stuck into the earth. It afforded a bird’s-eye view of surrounding ranges covered in jade green bushes. The Weihe River, the biggest feeder of the Yellow River, glinted in the sun not far away.

The peak is wrapped in so many beautiful legends. It was said to be the site where a young Liu Chenxiang split the mountain with an axe to rescue his mother, a goddess who married a human and was chained to the mountain as punishment. An axe-shaped rock on the summit lends credence to the centuries-old story.

The ancient Chinese loved to create myths of love, faith, courage, bravery and perseverance from the natural scenery. It was a way of revering the sky, the waters, the mountains and the cosmos, and express a determination to conquer them all. 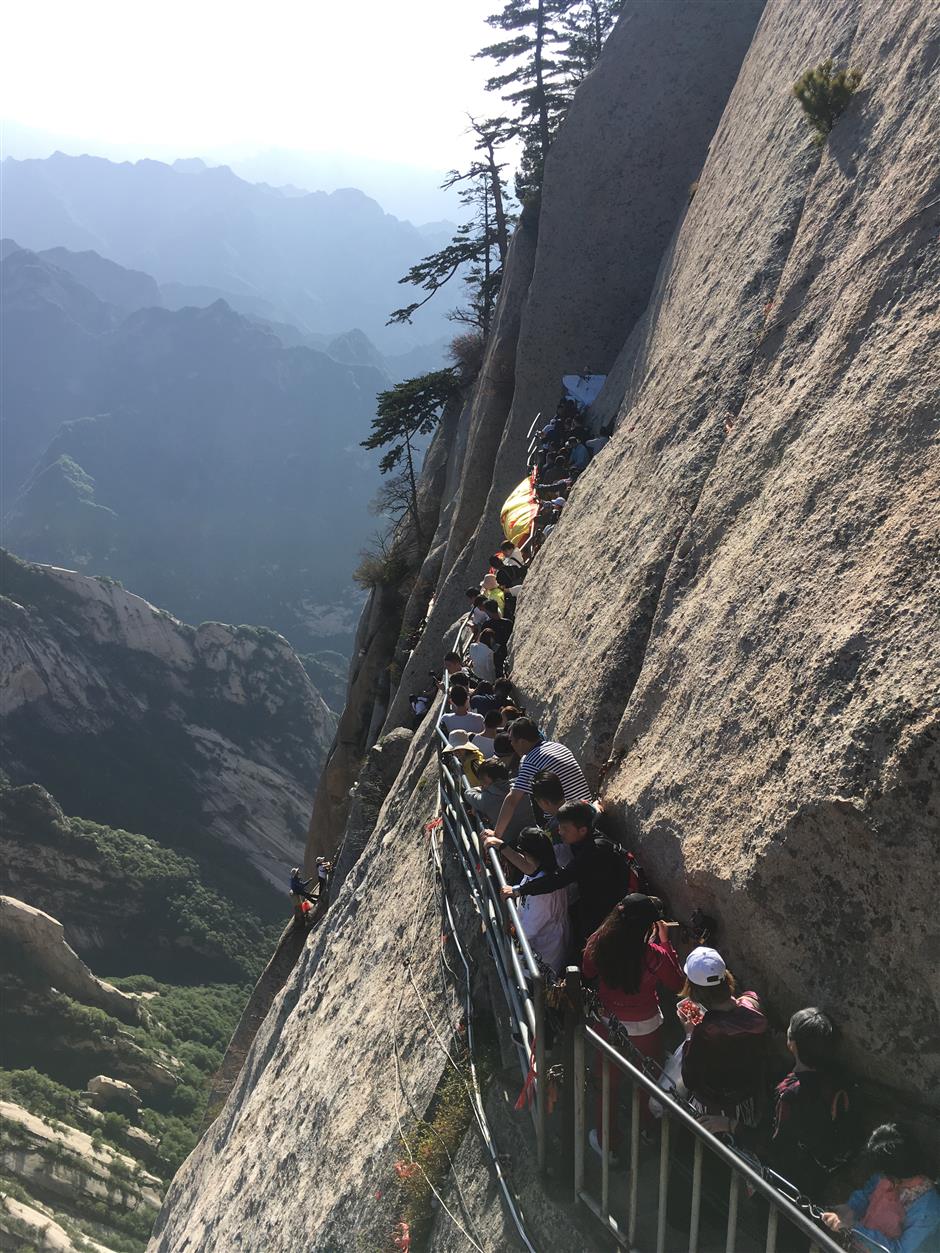 Allowing only one person to pass at a time, a narrow stone path from the southern cliff of West Peak leads to South Peak.

Standing on the summit, I was awed by the grandeur around me and intimidated by the sheer cliffs at my feet. It’s hard not to regard mankind as puny next to it all.

A narrow stone path from the southern cliff of West Peak led to South Peak. About 300 meters long and flanked by lush pine, the trail is aptly called one of the most dangerous on the mountain. It is so narrow that only one person can pass at a time.

I decided to hike to South Peak, without paying much attention to the wind that was starting to pick up.

South Peak has a mystery at its top. There is a small pond there, one meter deep, with crystal green water that never dries up. It’s called the Pond of Sky Watch, probably because it was considered so close to heaven. The founder of Taoism, Tai Shang Lao Jun (Supreme God), is said to have used the water to practice alchemy.

Today, the pool has become a wishing pond, where visitors throw in coins or even paper notes. 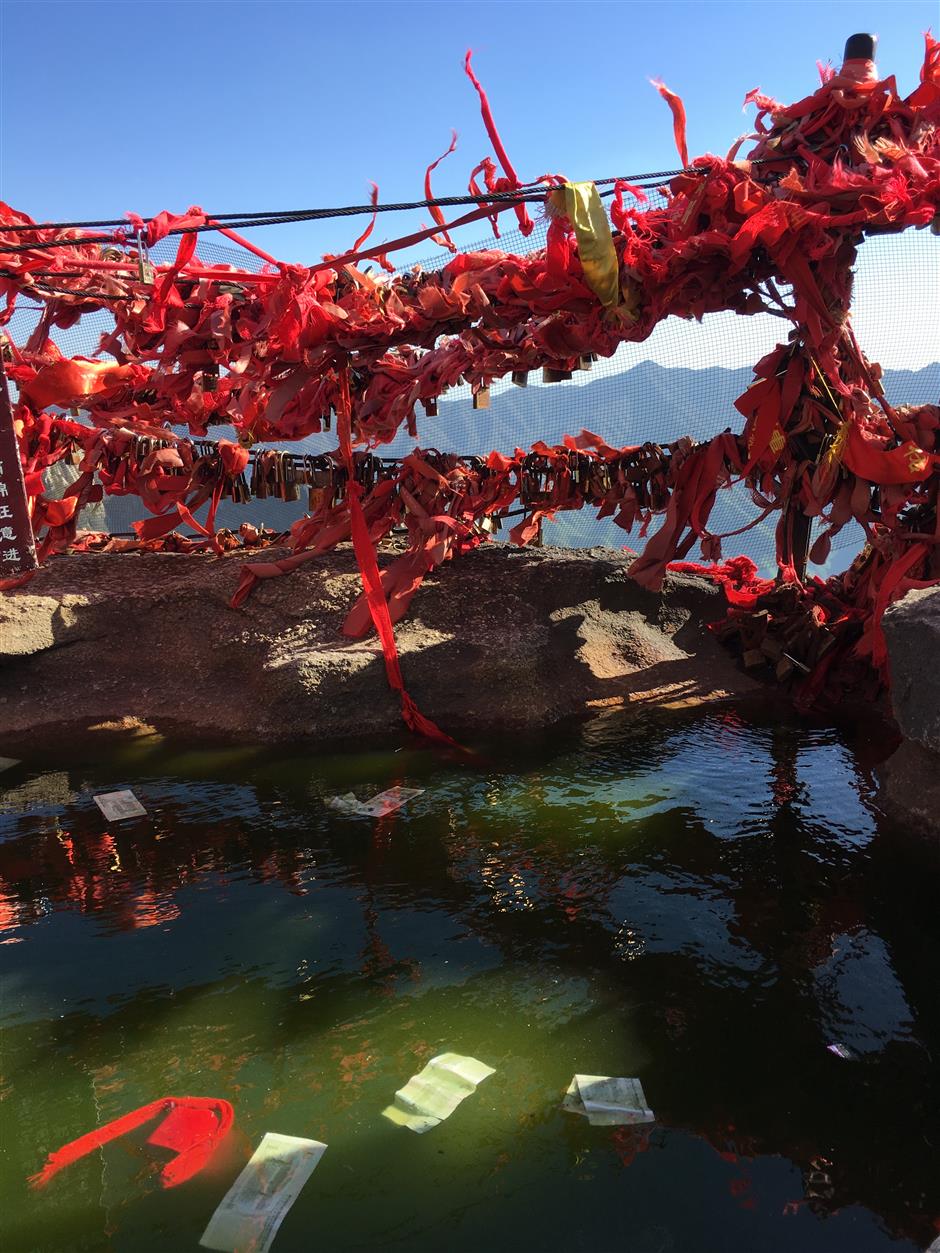 The small pool on South Peak has become a wishing pond, where visitors throw in coins or even paper notes. 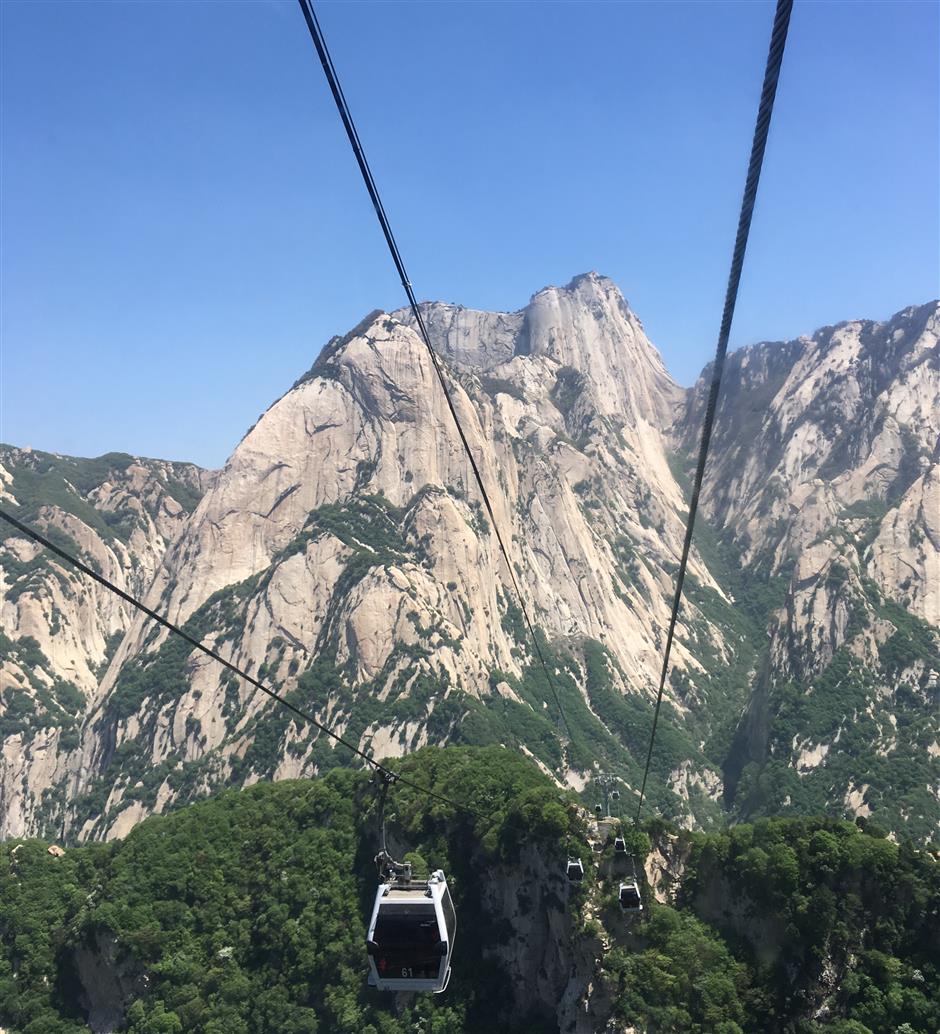 The wind was starting to blow harder and it was getting dark. It was time to descend. Then I learned that the west-line cable car I had earlier ridden was now shut down because of gale force winds.

There was one other option — the cable car on the North Peak — but that was several hours away by foot, with no guarantee that it would be open either.

I had no choice but to seek overnight accommodation on Huashan. I remembered there was a hotel on East Peak, a 45-minute hike away. I hastened along, fearing that all the rooms might be grabbed up by others stranded on the mountain.

It was getting very cold, and the mountain began to feel threatening. I had to walk against a ferocious wind, with an incipient fear that it might blow me over the side of a cliff.

I finally reached the hotel before sunset and was lucky enough to get the last available room. Or bed, to be more specific. My accommodation was a four-bed dorm room without air-con, hot water, washroom or other furniture. There was a public toilet in the yard, which emitted an unpleasant odor.

Despite the somewhat basic accommodation, the hotel is said to be the best on the mountain. Its Zhaoyang Platform gives visitors a magnificent view of the sunrise.

I was so tired that I jumped into bed with my clothes on, but I didn’t sleep well because the wind sounded like a pack of howling wolves and rattled the windows.

“Are you afraid?” asked one of my roommates.

He introduced himself as Mr Li, 87, and told me he was a Chinese writer who had lived in the US for decades. I imagined him to be one of the oldest people ever to climb Huashan.

“Just relax,” he said. “The mountain is always nice to its people. We should be thankful for its beauty and generosity.”

He regaled me with stories of his life, and his soothing voice was a comfort amid such unsettling weather. 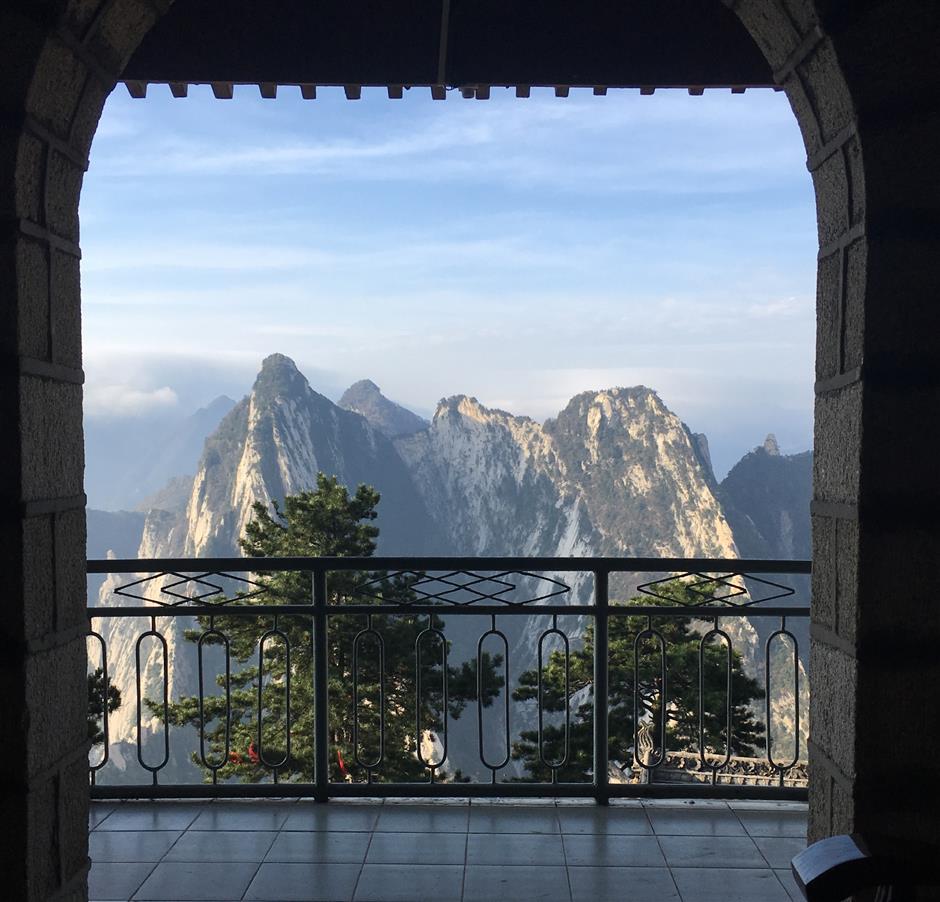 East Peak seen from the lobby of the hotel 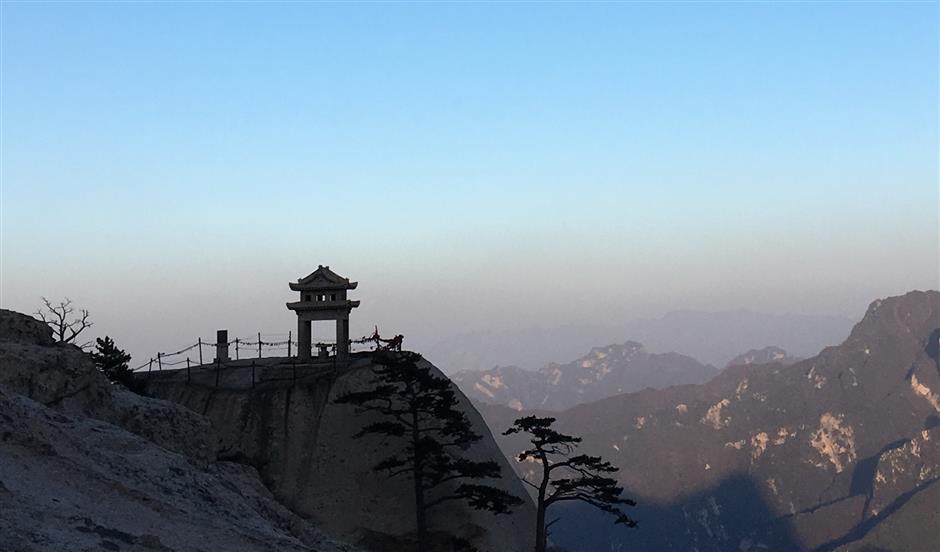 The Chess Playing Pavilion on East Peak is where Zhao Kuangyin, the founding emperor of the Song Dynasty, played the game of go with Chen Tuan, an old Taoist master.

The next morning, I watched the sunrise and chatted with other travelers to get the lowdown on what had happened during the gales. I learned that 160 tourists had been trapped mid-air in the cable cars for up to eight hours. I considered myself fortunate to have found a bed.

When the sun finally came up, I got a close look at East Peak from Zhaoyang Platform. There was a small pavilion standing forlornly on a lower peak. It is said to be the place where Zhao Kuangyin, the founding emperor of the Song Dynasty (960-1279), played the game of go with Chen Tuan, an old Taoist master. The emperor lost the game and forfeited Huashan Mountain to Chen, as the story goes.

A narrow stone path carved into the cliff leads to the pavilion. Travelers brave enough to undertake the trip must be attached to a rope and fumble along the way on tiptoe. The trail is called Somersault Path because it requires some awkward body movements at several turning points.

I gave up the try without hesitation. Then I met Tian Xuesen, 43, who was painting the pavilion on East Peak. For the last nine years, he said he has been painting the mountain in the different lights of passing seasons. Tian rents a small farmhouse at the foot of the mountain as a studio of sorts. He works by day when the light is good, and sleeps in a van or tent at night. 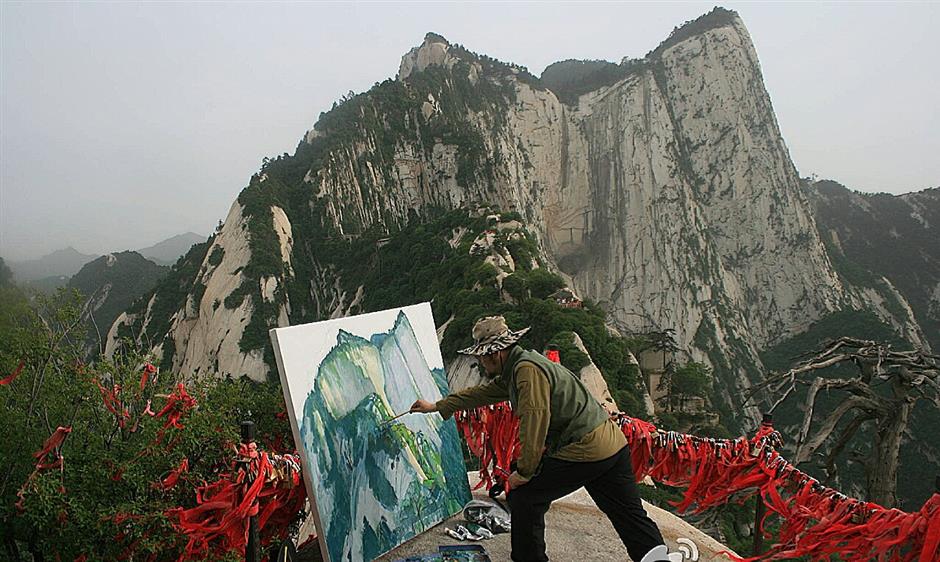 Tian Xuesen, 43, has been painting Huashan Mountain for nine years.

Life on the mountain is hazardous, he told me. There are wolves, snakes and bee stings to deal with. But he is unfazed. He said he befriended a snake that seemed to like his painting site and talked to a little bird that made a home on his hat.

“I know the mountain, live with it and try to present its beauty in my own way,” he said. “The mountain knows me and protects me. When I’m gazing at the mountain, it’s gazing back at me.”

I bid farewell to the painter and kept hiking to North Peak, where I could take the other cable car down the mountain. It was no easy hike. The trail was narrow, steep and sometimes slippery. Hikers have to wear gloves to grab onto iron safety chains along the way.

This area of the mountain is studded with many cultural relics, such as cave temples and rock inscriptions.

On the Supreme God’s Path along the trail, there were more than 750 steps. It’s said the god carved the trail with the help of an ox. Canglong Lane, another stone path, lies between two mountains and, seen from afar, looks like a giant, furious dragon. 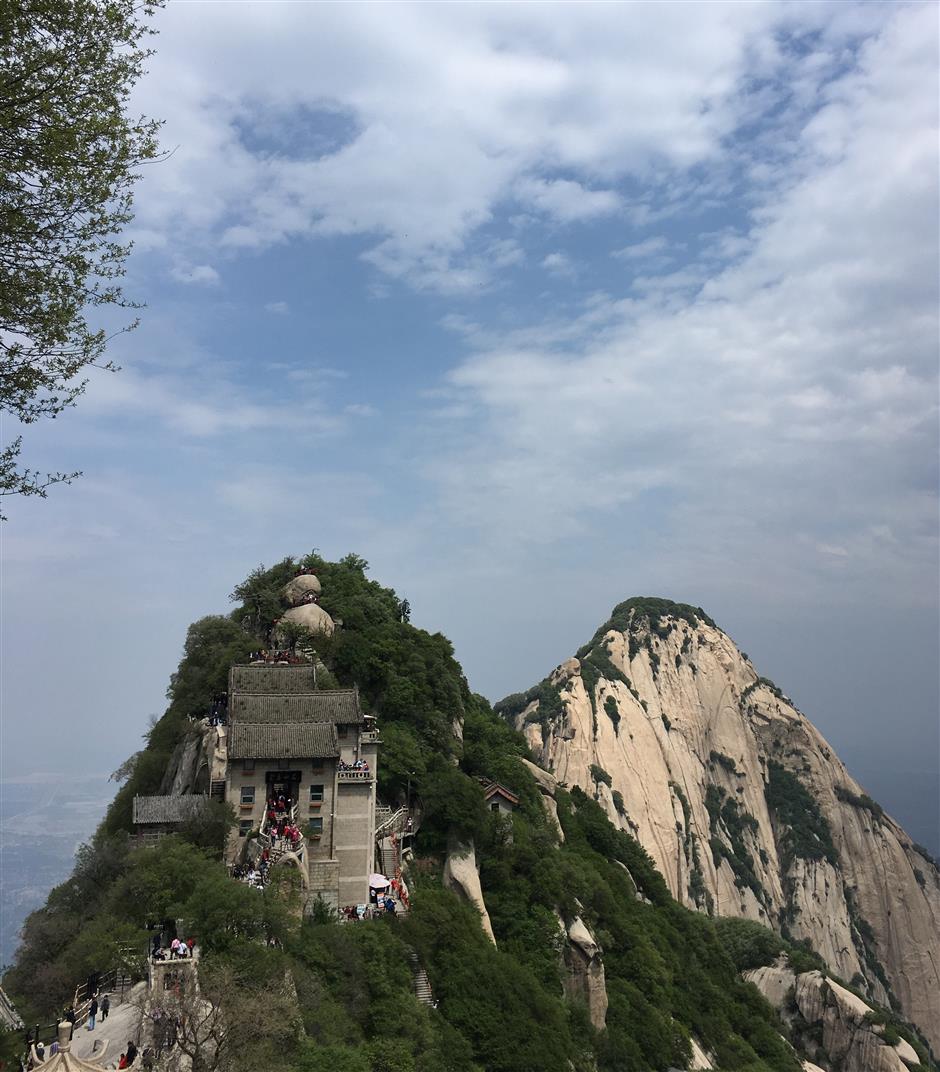 I met Mr Chen, a mountain trash collector, when I was resting on a rock. The 52-year-old local said he has been working on the mountain for more than four years after farming for most of his life.

His job is to collect the trash along a 2-kilometer stretch of trail. It’s a precarious work environment.

“Sometimes I have to climb down a rope to collect trash thrown in low-lying areas,” he said.

Chen said he earns about 4,000 yuan (US$624) a month, a far better income than farming. However, he admitted that his job is getting harder the older he grows. He said he has lost count of the times he has hiked up and down the North Peak trail.

“I don’t know how much longer I can do this work, but I am a man of the mountains and I have a special attachment to this place. The mountain protects us,” he said.

When I finally reached the northern cable station, the last stop of my Huashan journey, crowds of people lined up, waiting for a ride down.

I was suddenly overcome with the strange feeling that the mountain had wanted me to spend a night in its midst and meet the old writer, the painter and the trash cleaner. In the glow of serendipity, I felt a deep respect for the mountain and basked in harmony with its nature. 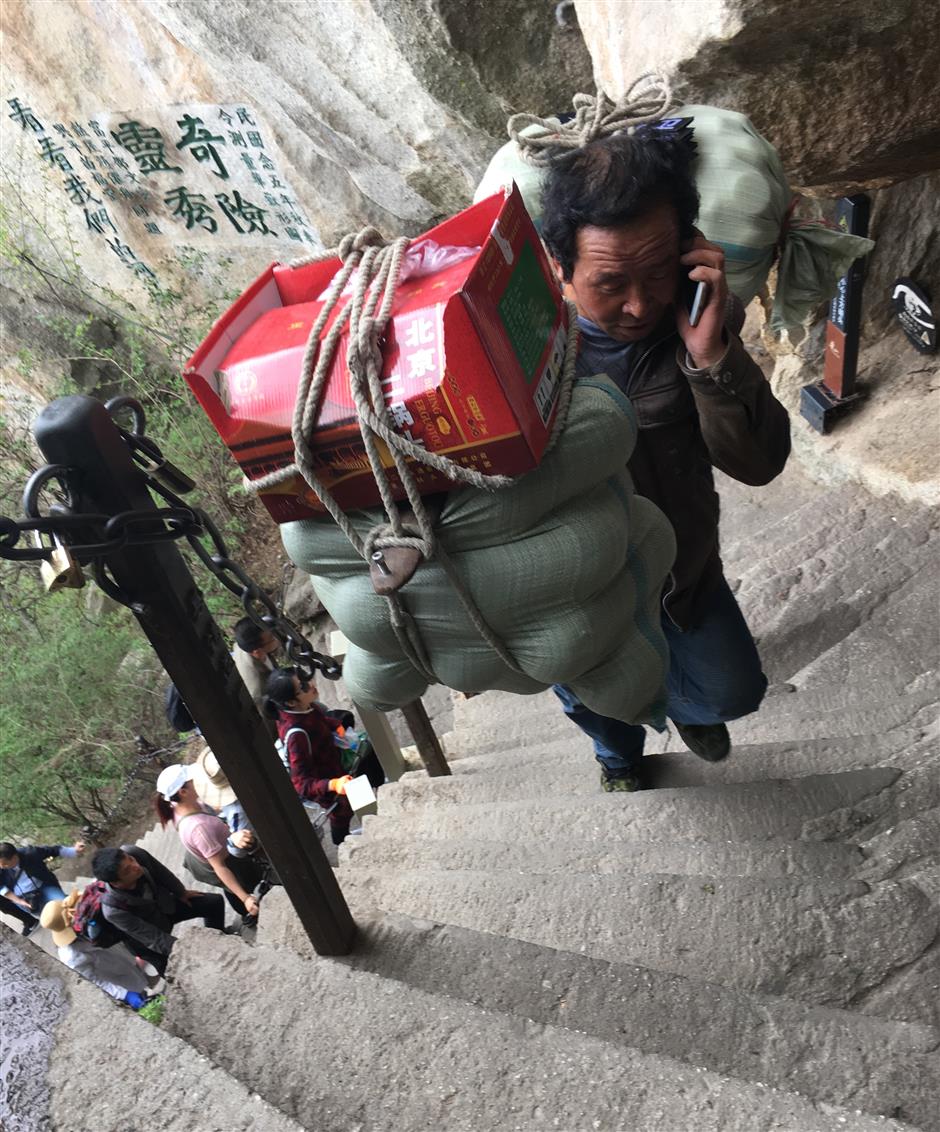