Children's museum explores depths and heights of the Earth 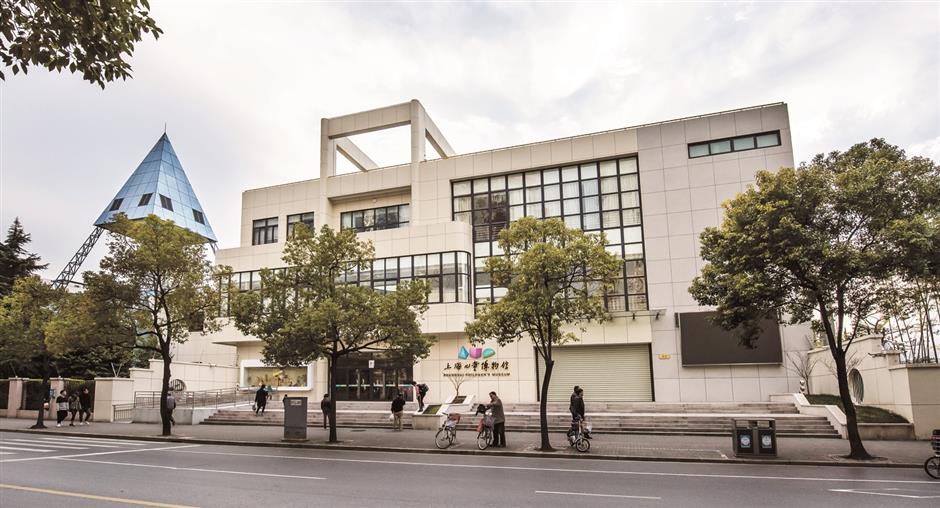 Jump, climb, build, navigate. Who ever thought a museum could be so much fun! But fun it is at the Shanghai Children’s Museum this summer, where children on school holidays are treated to discovery and entertainment.

Opened in 1996 and upgraded last year, the museum claims to be China’s first institution tailor-made for children aged 3-10. It’s located on Songyuan Road, near the burial site of Soong Ching Ling (1893-1981), wife of Dr Sun Yat-sen, who dedicated her life to the cause of children and women.

The multi-story museum takes visitors on a journey through oceans, space and back home again. Its mascot Gulu, a bug-eyed alien with four fingers on each palm and two thick, toeless feet, is the tour guide. He appears in the directive system, videos and some interactive installations, wearing various costumes based on the themes of the halls where he turns up.

The discovery journey begins in the dimly lit Ocean Hall on the first floor, with bubble shadows on the walls and the sounds of waves permeating the air. This is the mysterious realm of the deep. 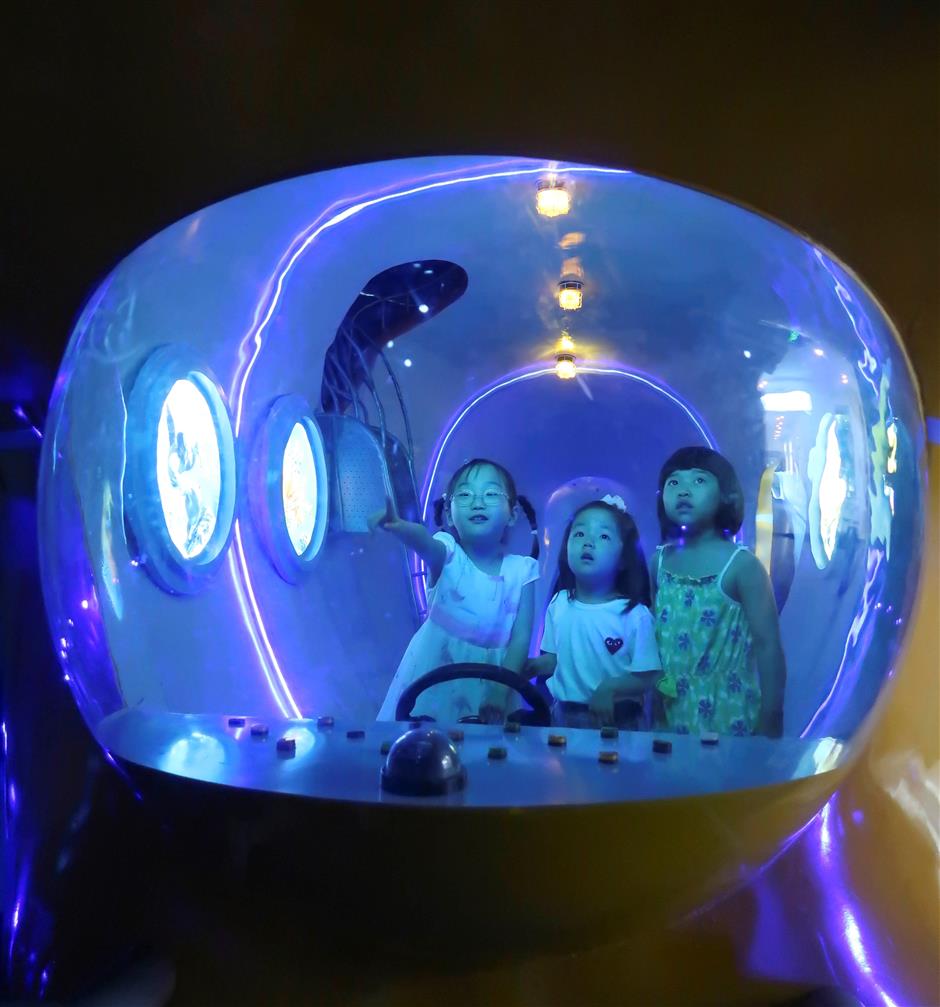 The captain’s cabin of a scientific research ship captivates young visitors at the museum. 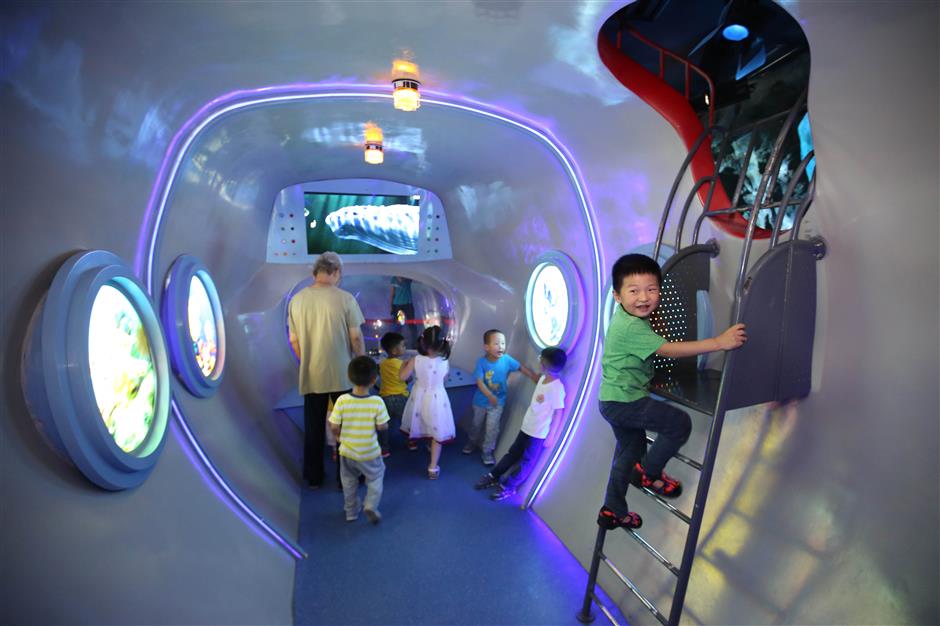 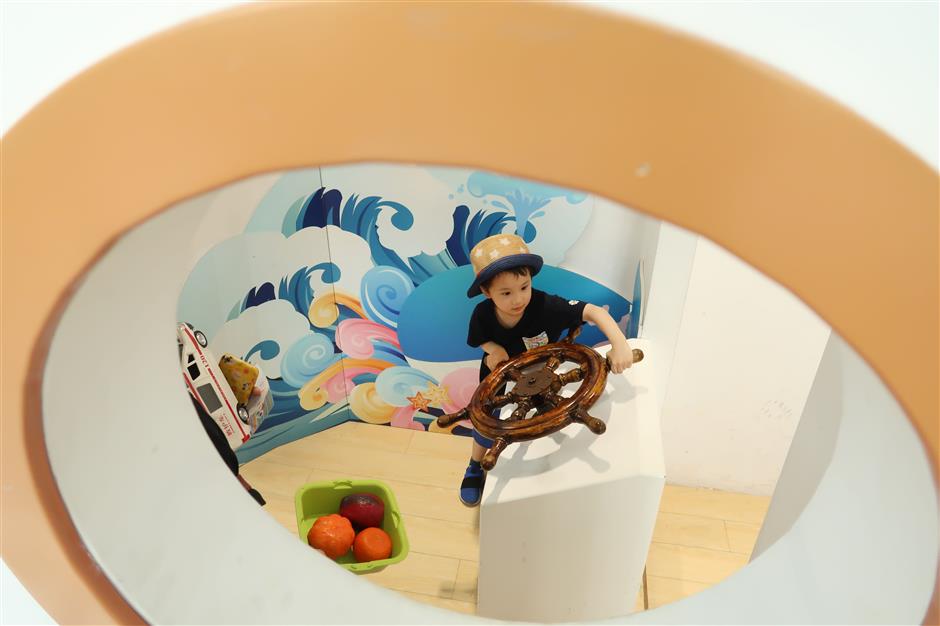 Children can sit in the captain’s cabin of a scientific research ship, steering the vessel in an augmented reality setting. The buttons on the control panel are so heavily used that they have been replaced hundreds of times.

Oh-oh! Here comes a waterspout. These dangerous sea tornados, which are simulated once every hour, can destroy everything in their paths in seconds. Children are enthralled by the churning sea experience.

There’s also a wave-making machine that functions as an interactive project for energetic visitors who make waves by shaking a handle. The faster they shake, the more turbulent the waves, leading to ships capsizing and sinking at sea.

What lurks below? The museum displays a mini-mock version of the Rainbow Fish, China’s latest submersible, capable of diving up to 11,000 meters below the sea surface. The bathyscaphe, with a capacity of up to 10 children at a time, explores the unknown below. It is equipped with a large screen that reveals the mysteries and weird inhabitants of the underwater world. 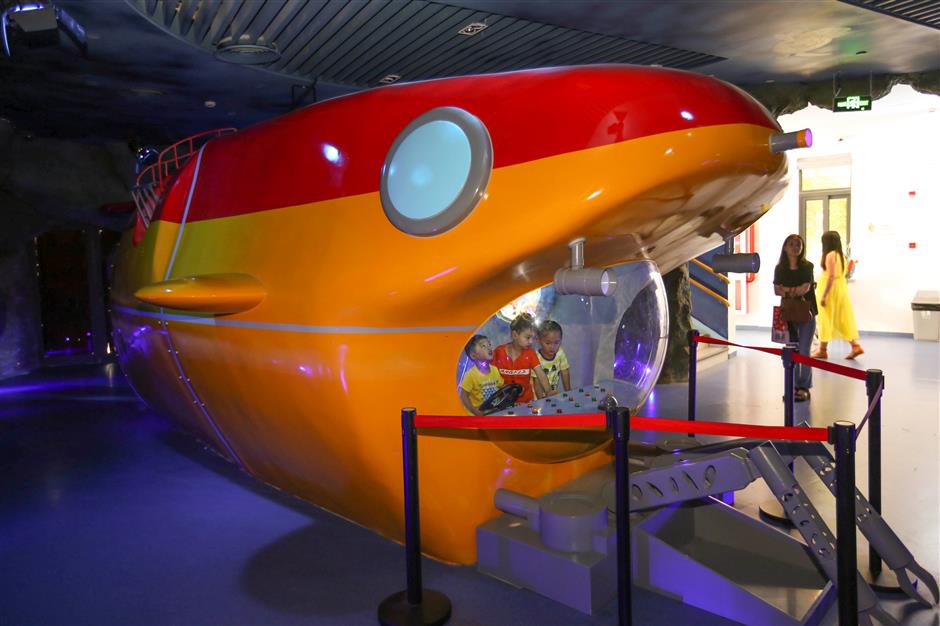 The hall also exhibits old Chinese marine maps and the models of famous ships that marked China’s illustrious maritime history — the sand boat of the Tang Dynasty (AD 618-907), the bird boat of the Ming (1368-1644) and the modern Snow Dragon, a China-made icebreaker used for scientific research at the poles.

Visitors pass from the deep blue to deep space when they move to the second floor. Here the journey goes into the world of the cosmos.

Children can have a close look at meteorite fragments and other space rocks collected from Russia, Switzerland and Africa.

A day in the life of an astronaut. Children learn about weightlessness and how astronauts work on the space station. Hop on a scale and see how your weight varies on Earth, the moon, Saturn and Jupiter. It’s a lesson in gravity.

One of the biggest highlights is the original second engine of the Changzheng-4 rocket. Simulated rocket launches are staged every day.

Children also learn about China’s Long March rockets, dating back to Long March No. 1 rocket, which successfully launched the East Red No. 1 satellite into orbit in April 1970.

A somewhat “ugly-looking” black pan on exhibit is the original recovery capsule of China’s first-generation return satellite, which stayed in space for three days. Its zigzagging groove held a camera that took photos for mapping and scientific surveys. 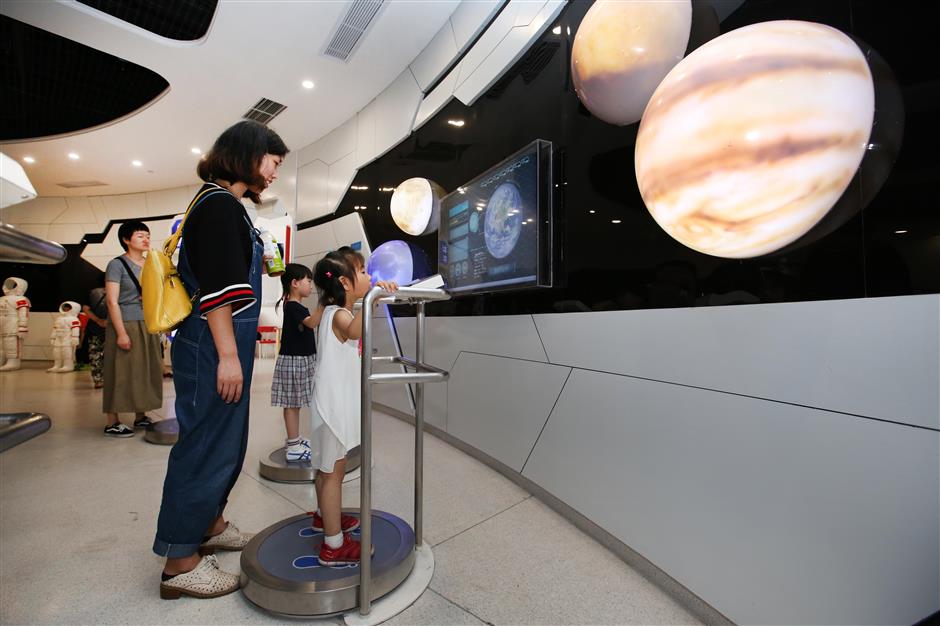 Children visit the Outer Space Hall to get to know the nine planets in the solar system. 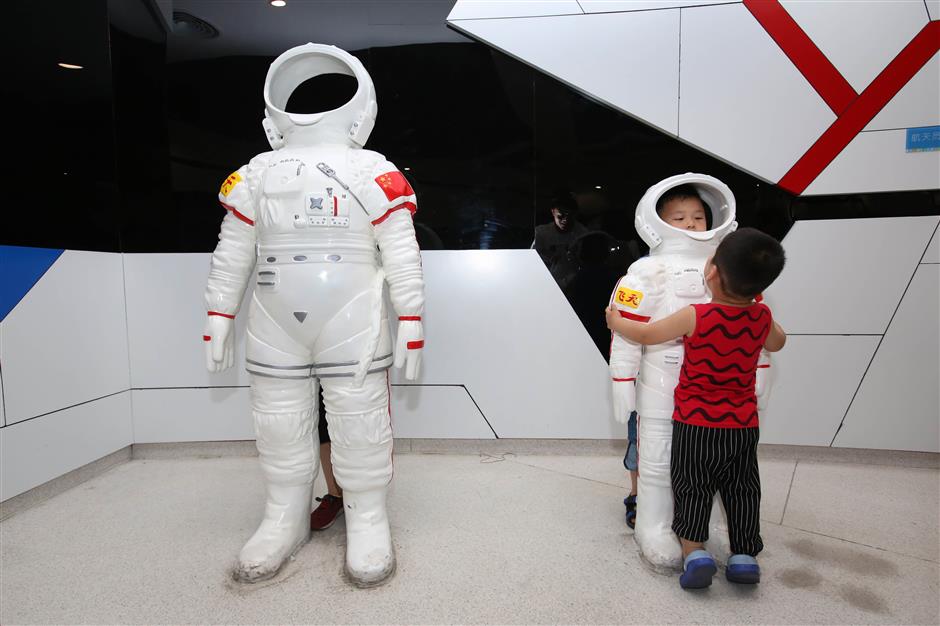 Children take turns "playing" astronauts on the second floor, which takes them into the world of the cosmos. 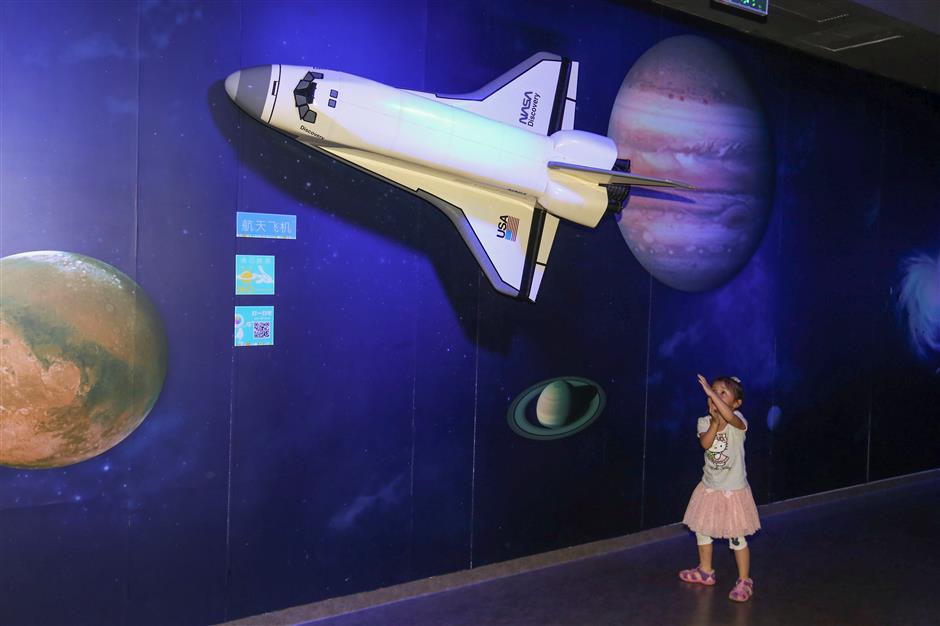 Home sweet home. The last major exhibition area brings visitors back to Earth and into the familiar surroundings of Shanghai.

A Kid’s Zone for preschool children presents themes related to Shanghai “sister cities” across five continents. Children can build pyramids in Egypt, try on kimonos in Osaka, unload cargoes in Hamburg and play games from the old shikumen (stone-gated) neighborhoods of Shanghai.

The Cao Ying Study offers a quiet space for children who love reading. The room was set up to commemorate the great translator Cao Ying (1923-2015), who translated many Russian literary classics. All the books were donated by Cao and his family.

The museum also features a small movie hall on the first floor. The Dome Theater is a semi-circular cinema where children can watch movies exploring realms such as the night sky and ocean reef life.

The underground floor is a fun park themed on excavation. Children can use shovels to scoop out “bone fossils” and “treasures” hidden in the sand. On-site teachers give lessons to visitors. The area is open only to those who have booked into “educational activity” on the museum’s official WeChat account (上海儿童博物馆). 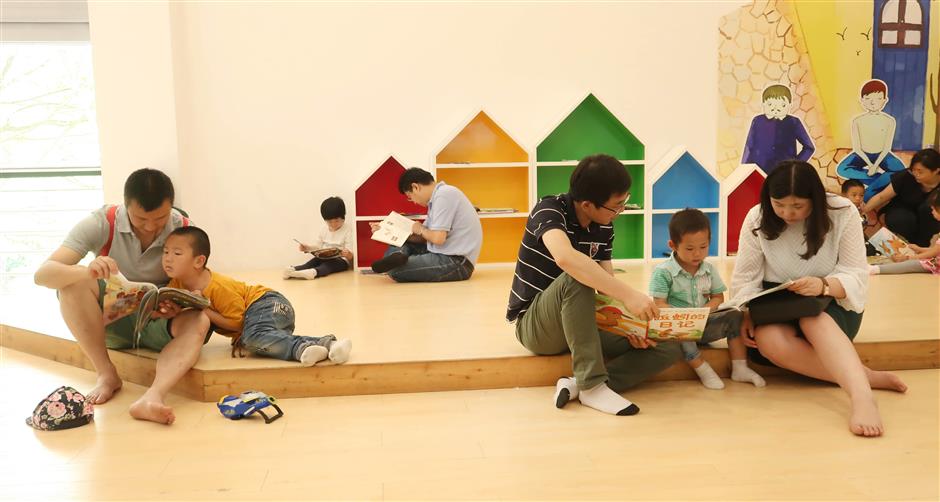 The Cao Ying Study offers a tranquil space for children who love reading. 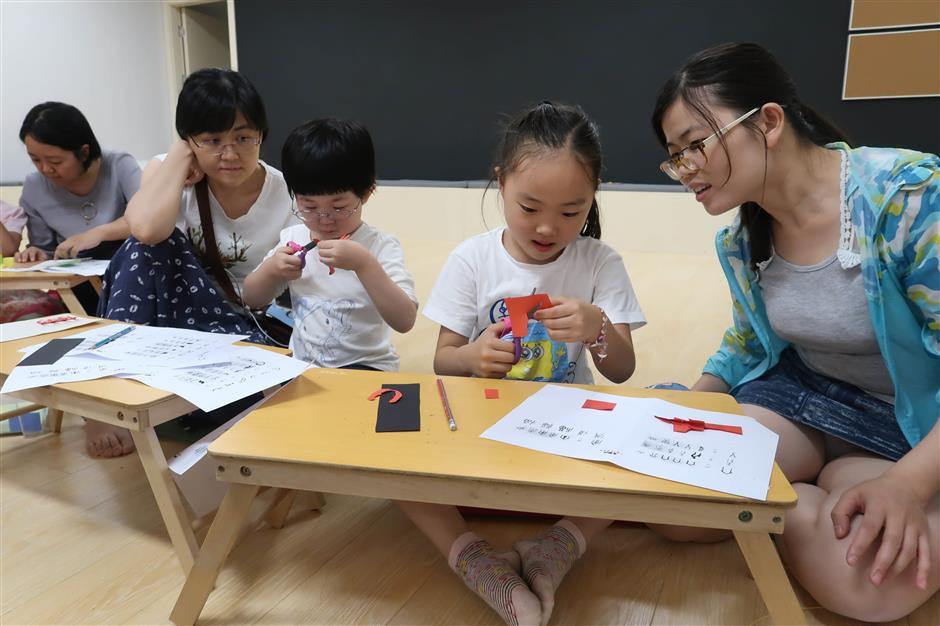 Museum activities include a workshop for children and their parents on making handicrafts.

Address: 61 Songyuan Rd
Opening hours: 8:45am-4:45pm (closed on Mondays)
Admission: Free. There is a charge for the underground excavation area, the Kids Zone, and the cinema.
How to get there: Songyuan Road Station of Metro Line 10