All aboard for a trip through the history of railways

The railways were and remain a significant factor in China’s economic development, and Shanghai has played a key role in that progress. The Shanghai Railway Museum is a tribute to the age of the locomotive.

The museum traces the colorful history of railroads since the first track went into operation in 1867.

Opened in 2004, the building of the museum — a British style of red bricks and gray walls is a smaller replica of old Shanghai North Railway Station built in 1909. 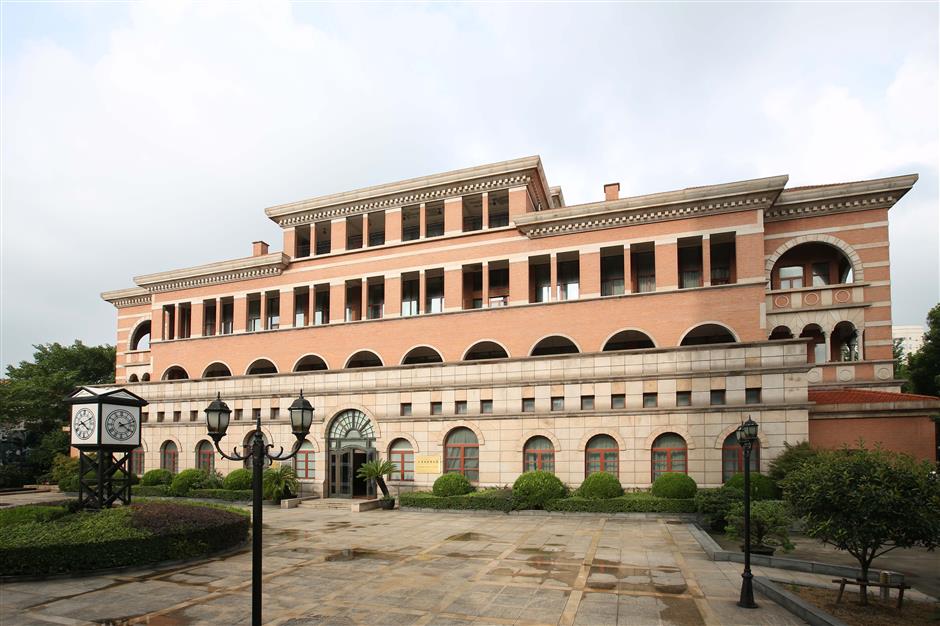 Opened in 2004, the building of the museum — a British style of red bricks and gray walls is a smaller replica of old Shanghai North Railway Station built in 1909.

The most significant exhibits in the museum, however, are in the yard instead of in the building. Three locomotives are the biggest drawcards for visitors.

One of them is an SN-26 locomotive manufactured in the US in 1928 and put into service in Yunnan Province. The relatively small, black locomotive was well adapted to narrow-gauge mountain tracks, making it the best choice for freight transport.

Another exhibit is the KD7-641 steam locomotive. Donated to China in 1947 by the United Nations Relief and Rehabilitation Administration to help with postwar economic recovery, it served areas around Shanghai and Guangzhou. This model has become valuable because of its scarcity.

The last one was ordered by the Kuomintang government in the 1930s as a private coach for Soong Mei-ling (1898-2003), wife of Chiang Kai-shek (1887-1975). The interior of the train was completely refurbished to include a bedroom, bathroom, meeting room and an office, all luxuriously appointed. Lamp holders were made of pure silver and chairs were covered in leather. Unfortunately, visitors nowadays can view the coach only from the outside.

“The coach was turned into a technical support car after the establishment of the New China,” said Huang Weiyang, an official with the museum. 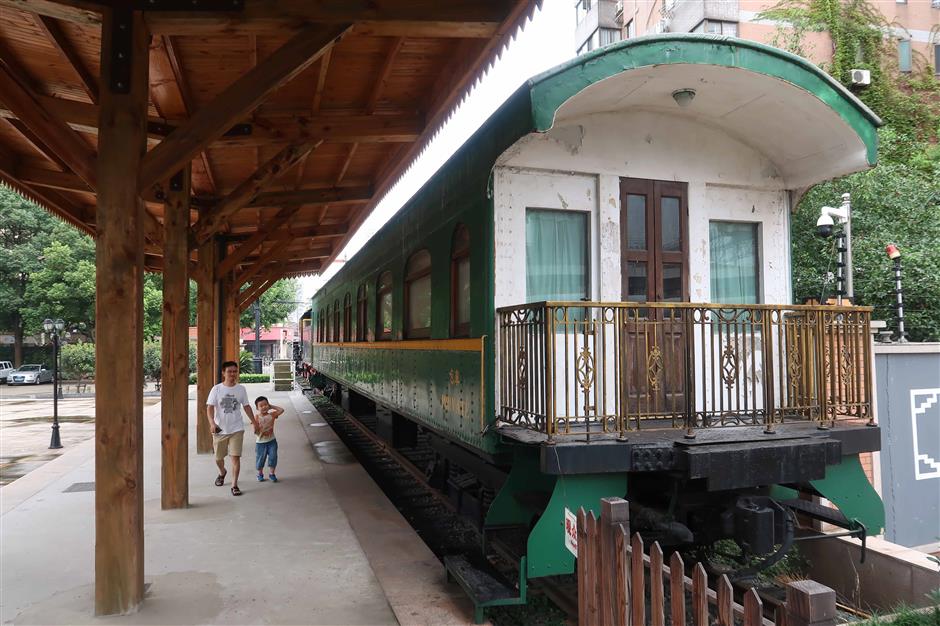 The coach refurbished by the Kuomintang government in the 1930s as private transport for Soong Mei-ling, wife of Chiang Kai-shek.

The exhibitions indoors display the history of China’s railways with a clear timeline, from the first track laid in Shanghai during the Qing Dynasty (1644-1911) to the latest high-speed train models released in the past 10 years.

In the 19th century, China was the third country in Asia to operate railways, after Japan and India. In 1865, a British merchant built a railway only half a kilometer long in Beijing to show the Qing government the future of transportation. Historical records show that people in Beijing were “frightened” by the train running on the track, and it was soon demolished.

The first railway put in operation was the 14.5-kilometer-long Wusong Railway, which goes from what is now downtown Shanghai to the Wusong area. Built by a British bank, the railway was not approved by the Qing government, which bought it a year later and demolished it.

But no government would turn back the tide of industrialization, which created a need for railroads. In 1881, the Qing government succumbed to the inevitable and built its own railway, a 9.4-kilometer line linking Tangshan in Hebei Province and the neighboring town of Xugezhuang. The main purpose of the line was to transport coal from a nearby mine.

After that, the Qing government started to cooperate with foreigners to design and build railways around the country. In 1909, railroad engineer Zhan Tianyou (1861-1919) became the first Chinese to design a railway.

The line, from Beijing to Zhangjiakou in Hebei Province, went through periods of damage, restoration and extensions for the next century. It is now part of the Beijing-Baotou (Inner Mongolia) line. 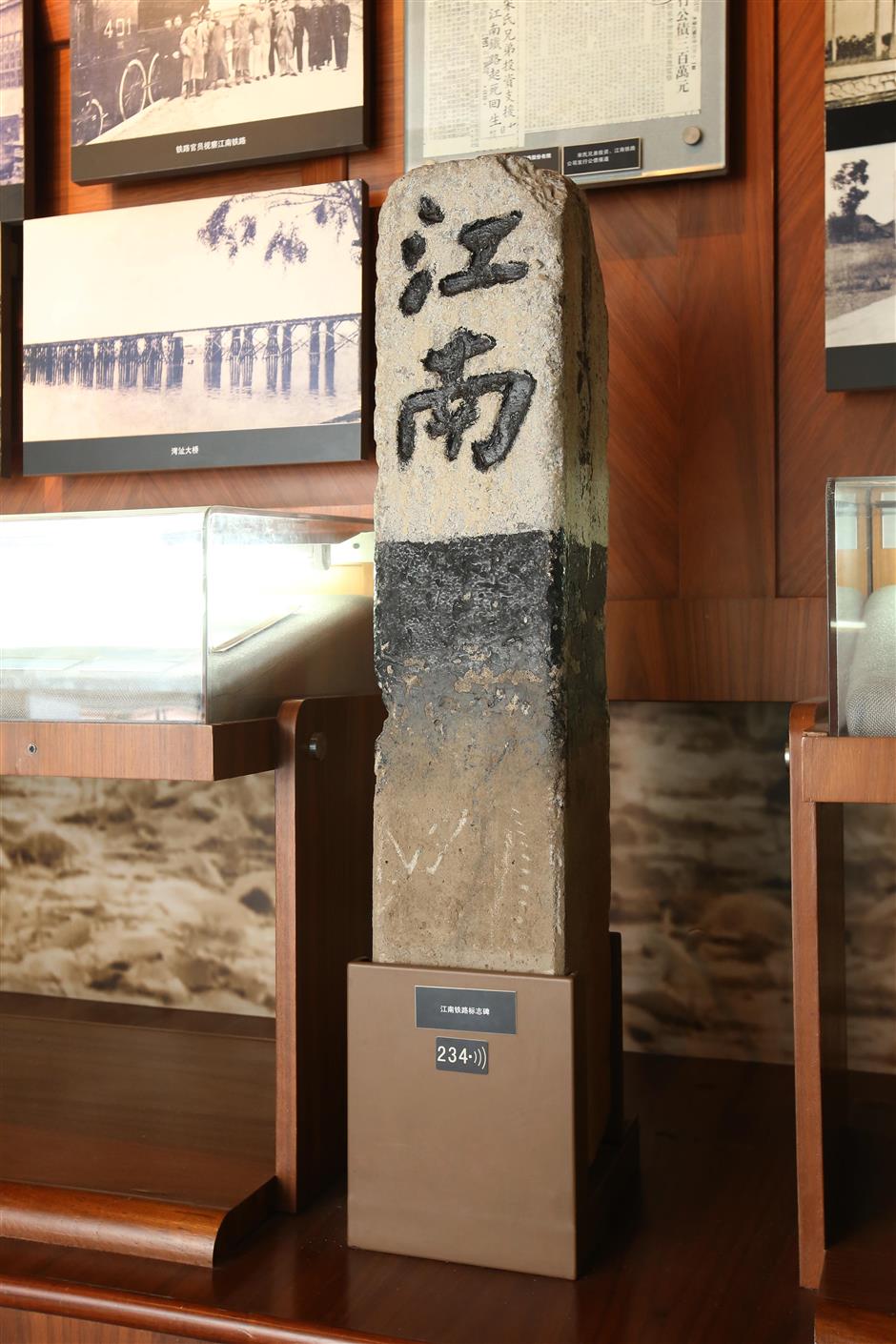 A boundary stone at the museum

The museum displays photos of the old railways and exhibits boundary stones that were once used on them. One boundary stone of the Tianjin-Pukou Railway, which linked the northern city of Tianjin with the Pukou Station in Nanjing, was collected from a farmer’s house. For a long time, the family had used it as a washboard without realizing its historical value.

“When we were preparing to open the museum, staff from the Shanghai Railway Bureau helped collect relics, and one of them knew that the boundary stone was quite valuable,” Huang said. “So they decided to buy it from the family.”

The museum also shows how Chinese railways suffered through wars and political disputes during the first half of the last century.

The former Shanghai North Railway Station bore witness to several incidents, including the assassination of Song Jiaoren (1882-1913), one of the founders of the Kuomintang.

In the 1930s, the Japanese bombed the station 19 times, and the building lay mostly in ruins. In 1933, a local construction office redesigned the station to restore railway transport as quickly as possible.

The North Railway Station wasn’t the only one bombed during the war. The museum displays a group of old pictures of bombed stations and tracks in the city. One of the most heart-rending shows a shell-shocked baby crying beside at a damaged track.

During the war, nearly all the Chinese railways were attacked by the Japanese. One exception was the Qiantang River Bridge, the first road and railway bridge in China. It was blown up by the Kuomintang government to stop the advancing Japanese army. The bridge later was restored after the war ended.

The collection of the museum gives visitors a sense of how railway-related technology and culture developed. Train repair tools, signaling devices, telephones used in control rooms and even tableware from dining cars are exhibited. 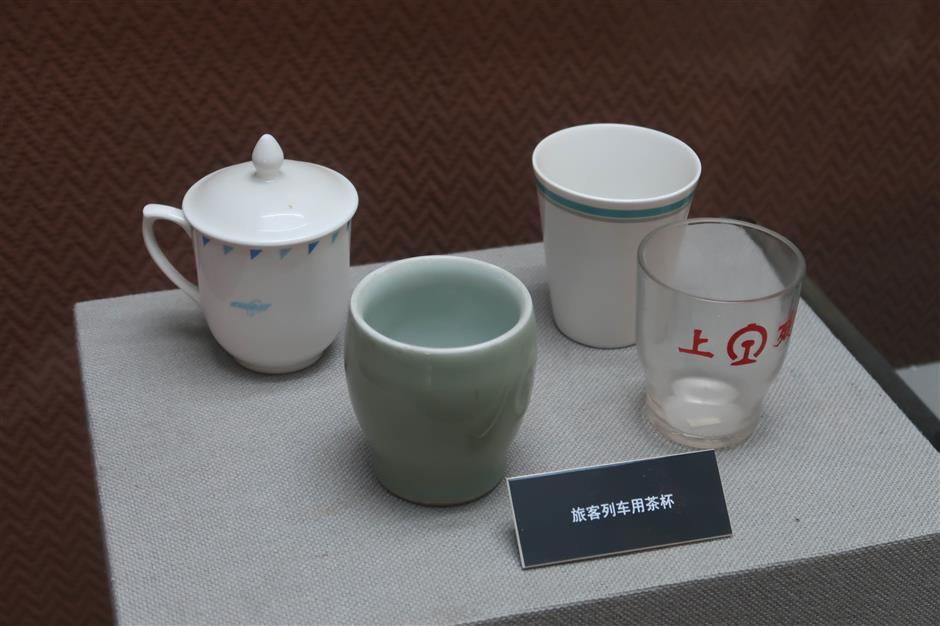 The museum indeed evokes a lot of memories. In 1987, when the current Shanghai Railway Station — which is still called “the new station” by many locals — was put into operation, the old North Station was closed. For the next 17 years, the site was used for offices and warehousing, until the museum was created to return the building to its railroad legacy.