There is a saying among Chinese Buddhists that a pilgrimage to Mount Wutai is worth 500 years of practice, which underscores the sacred status of the mountain in the history of Buddhism.

Temples at Mount Wutai in Shanxi Province mainly worship Manjushri, a bodhisattva associated with wisdom and insight. At present, the peaks that comprise Wutai are home to nearly 100 well-preserved ancient temples, some as old as Buddhism itself in China.

Mount Wutai was inscribed on the UNESCO World Heritage list in 2009.

The word “wutai” literally means “five flat peaks.” As the name indicates, five flat peaks encircle the town of Taihuai. When Drogön Chögyal Phagpa (1235-80), the fifth leader of Sakya school of Tibetan Buddhism, visited the mountain for a summer stay, he rhapsodized that Wutai was “as magnificent as Mount Meru, the supreme holy mountain in Buddhism and Hinduism.”

In his journal, Phagpa wrote, “The central peak, Cuiyan, looks like a majestic lion; the eastern one, Wanghai, like the head of an elephant king; the southern one, Jinxiu, like a steed lying on a plain; the western one, Guayue, like a dancing peacock; and the northern one, Yedou, like a roc spreading its wings.” 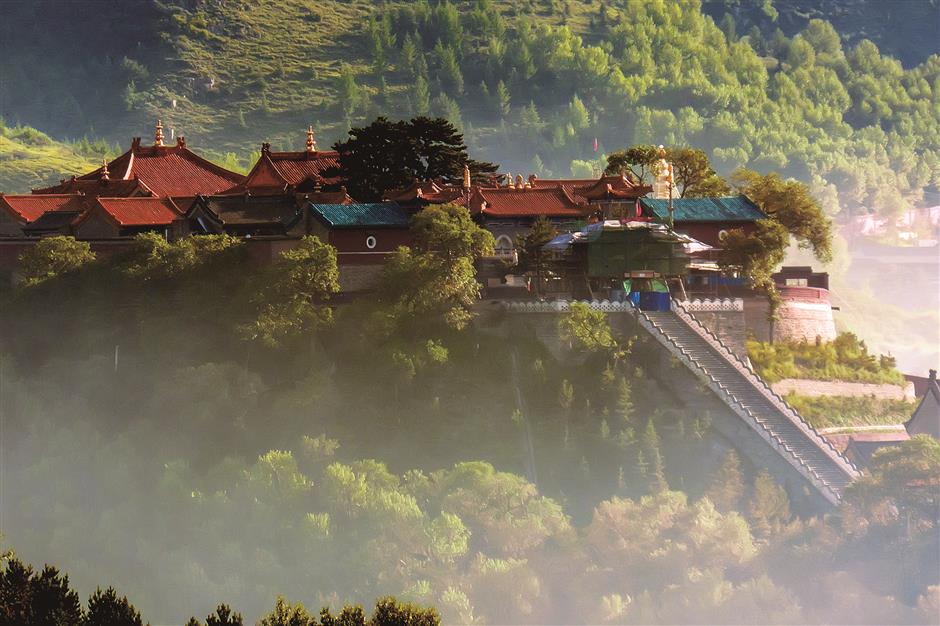 Mount Wutai is the home of more than 100 ancient Buddhist temples.

In fact, Mount Wutai was a Taoist holy site before Buddhism was introduced to the area around AD 68. Taoists believed that the mountain, once called Zifu or Qingliang, was where celestial beings lived.

Even the earliest legend about how Manjushri began evangelizing at Wutai was a story mixed with Buddhist and Taoist figures. It is said that the mountain was so scorching in the summer that Manjushri borrowed a “soothing stone” from the Dragon King of the East Sea, a Taoist god, to cool down the mountain and make it habitable.

But Taoism almost completely disappeared from Mount Wutai in the Tang Dynasty (AD 618-907), when Tibetan Buddhism was introduced after Tibet sent envoys to the Tang court in search of a border peace accord.

Phagpa was the most significant Tibetan Buddhist figure practicing there. After his visit, several Lama temples were built. Local people called them “the yellow temples” in contrast to the others called “green temples.”

Today, only about 10 temples in Mount Wutai are open to the public, displaying the supreme achievements of Buddhist culture, architecture and arts.

Here’s a look at a few of them.

The Great White Pagoda in Tayuan Temple is regarded as an icon of Mount Wutai. It is built in typical Tibetan Buddhist architectural style, which is rarely seen outside the Tibet Autonomous Region.

The origin of the tower is still a mystery. Local records show that when Buddhism was first introduced at Mount Wutai, there was already a stupa standing where the current pagoda is located, its builders unknown. The stupa was rebuilt multiple times, and the current one traces back to the Ming Dynasty (1368-1644).

The tower, officially named the Sarira Stupa, is said to hold treasured relics, or sarira, of the Buddha in its crypt, but that rumor has never been confirmed because the crypt has never been excavated.

The site remains a holy shrine for Buddhists, especially Tibetan Buddhists. Pilgrims walk around the pagoda and pray to express their gratitude for Buddha’s blessing. 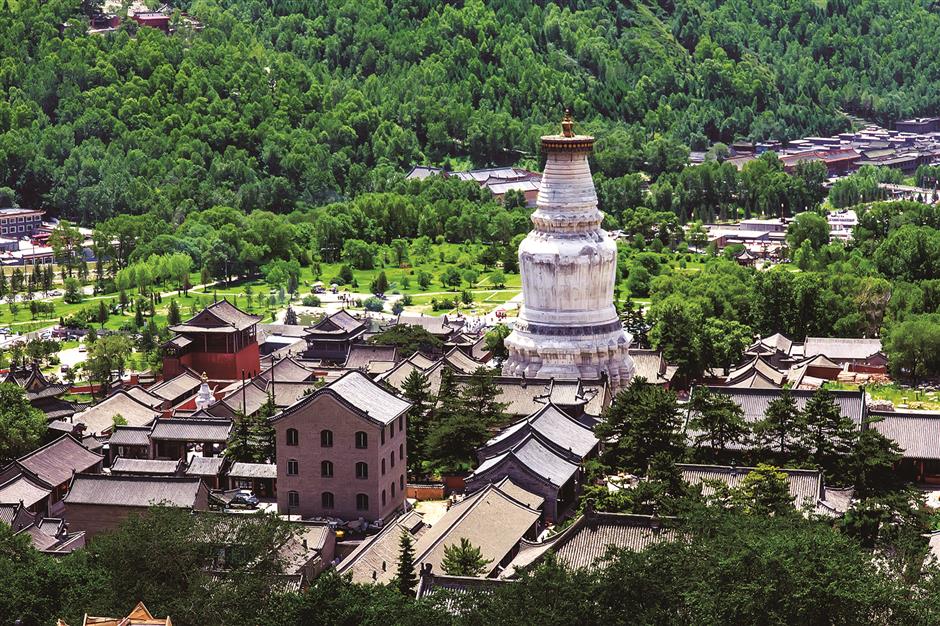 The Great White Pagoda, or the Sarira Stupa, in Tayuan Temple is worshipped by every pilgrim to Mount Wutai.

Compared with other stately temples at Mount Wutai, the halls of Nanchan Temple look plain, even shabby. The building is the oldest remaining example of timber construction in China.

Dafo Hall, the main area of the temple, was built in AD 728, and many of the joinery techniques used in its construction have been lost. It is a unique example of Tang architecture.

Nearly 20 statues, including a statue of Manjushri and other bodhisattvas, were sculpted concurrent with the building of the hall. The statues are placed around Buddha on a large shrine, creating a vivid group portrait.

Visitors, however, have not been allowed to step foot in the hall since a heist in 1999. It is reported that three scoundrels broke into the hall one evening, sawed loose several Tang statues and excavated others, seeking concealed relics. They left with the statues and relics, which have never been recovered.

As one of the oldest Buddhist temples in China, the history of Xiantong Temple traces back to the first century AD. It was rebuilt multiple times over the next 1,000 years; its current buildings were constructed during the Qing Dynasty (1644-1911).

Most of the rituals on Mount Wutai are held in this temple, giving it a unique status on the sacred mountain.

Brass Hall is the most impressive of seven halls, with its glistening aura in the sunshine. The interior of the hall, however, is equally splendid. Tens of thousands small brass statues cover the four walls, shining like gold.

Perhaps even more precious than the buildings are the scriptures collected in the temple. A “Flower Adornment Sutra” text pagoda is a highlight of all collections.

The 600,000-plus words of the sutra texts form the shape of a pagoda. It is believed that Xu Dexing, a lay Buddhist in the Qing Dynasty, spent 12 years copying the text pagoda and dedicated it to Mount Wutai. 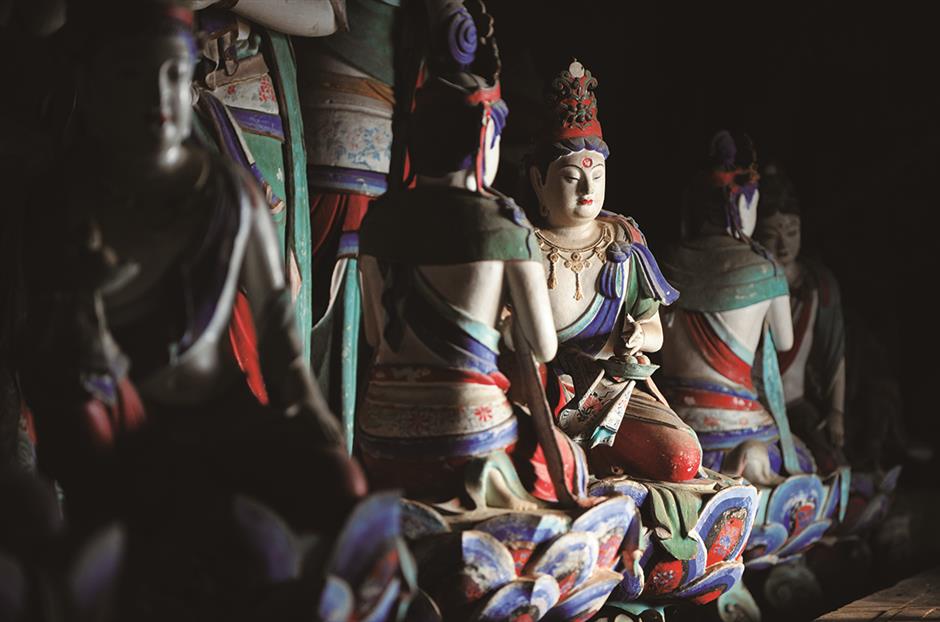 Some sculptures in the temples trace back to Tang Dynasty.

Also known as Qixian Temple, Guanyin Cave is a Tibetan Buddhist, or “yellow” temple. It stretches from the bottom to the middle of a steep cliff in the Qixian Valley. There are two caves right behind the main hall of the temple. Clear mountain spring water drips from the top, collecting in the left cave and forming a pond. The water is believed to be blessed by Guanyin Bodhisattva, which is how the temple got its name.

The interior decor of the temple as well as the bodhisattva statues are visibly different from those in “green temples.” Gold lacquer, kallaite stones and colored enamels create a style almost as flamboyant as baroque palaces.

Owing to the rarity of Tibetan Buddhist temples in central China, the site is worth the arduous walk up the steep, winding staircase of the cliff.

Lamas in the temple sprinkle water to lucky visitors, giving them the blessing of the bodhisattvas.

Take a flight to Taiyuan, capital of Shanxi Province, and then board a long-distance bus to the town of Taihuai.

There are battery carts shuttling between temples and to hotels nearby.

As a Buddhist sacred site, Mount Wutai hosts many vegetarian restaurants for pilgrims and other visitors.

Monks here have long been growing vegetables and grains to support themselves, which is viewed as a way of Zen practice.

Cooking is also a part of Zen. For hundreds of years, Buddhist recipes have been circulated among temples and handed down from generation to generation. Some of the dishes have become icons of Mount Wutai.

The white pagoda tofu skin roll (bai ta xiang ling) is one of them. A long white radish is carved into the shape of the white tower in Tayuan Temple, and fried tofu skin rolls stuffed with carrots, mushrooms, bamboo shoots and mashed potato are served around the radish pagoda. The dish is prevalent on local banquet tables.

Development of tourism at Mount Wutai has spawned many vegetarian restaurants in recent years. Cooks there specialize in making vegan dishes taste and look like original meat versions.

The menus include braised pork in soy sauce and sweet and sour fish, but both are made from bean products, gluten and mushrooms.

One of the most highly recommended restaurants is Yizhanmingdeng, which literally means “a bright lamp.” Mountain delicacies such as kalimeris asters, black fungus, day lily buds and bean seedlings give rich flavors to more than 100 dishes on the menu.

“The restaurant is much more expensive than similar restaurants,” says Xiang Shulao, a visitor to the mountain. “But the quality of the ingredients and the excellent cooking skills make it all worthwhile.”

Apart from vegetarian foods, steamed oat rolls, a local Shanxi snack, are also served here. Wide oat noodles are rolled up and put into a steamer in a honeycomb configuration. The dipping sauce served with the rolls is a mixture of sesame oil, soy sauce, vinegar and chili oil. 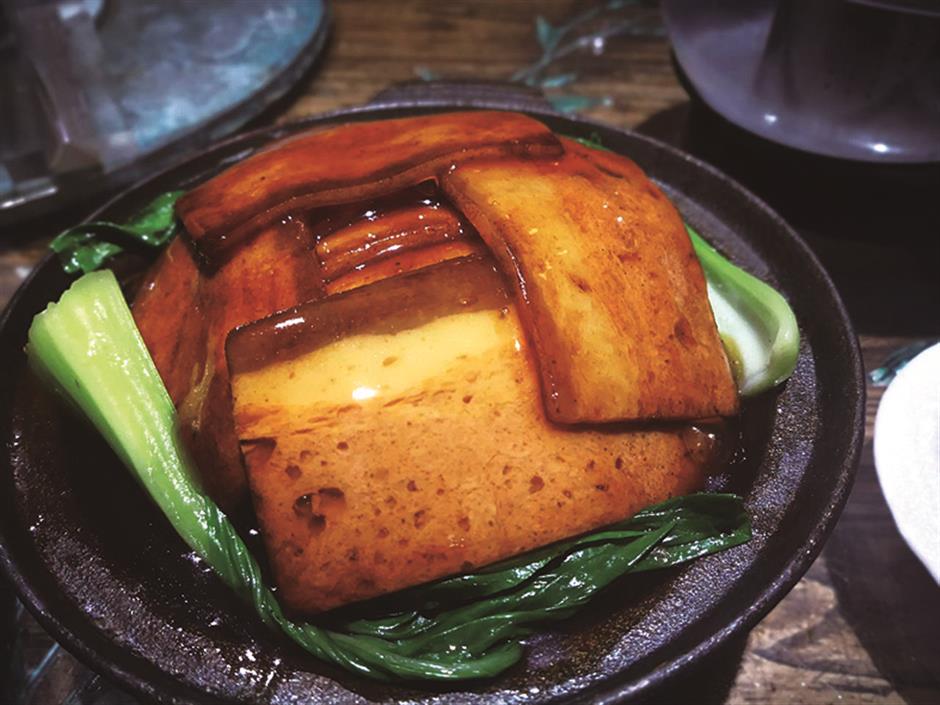 Vegan “pork” made of bean products