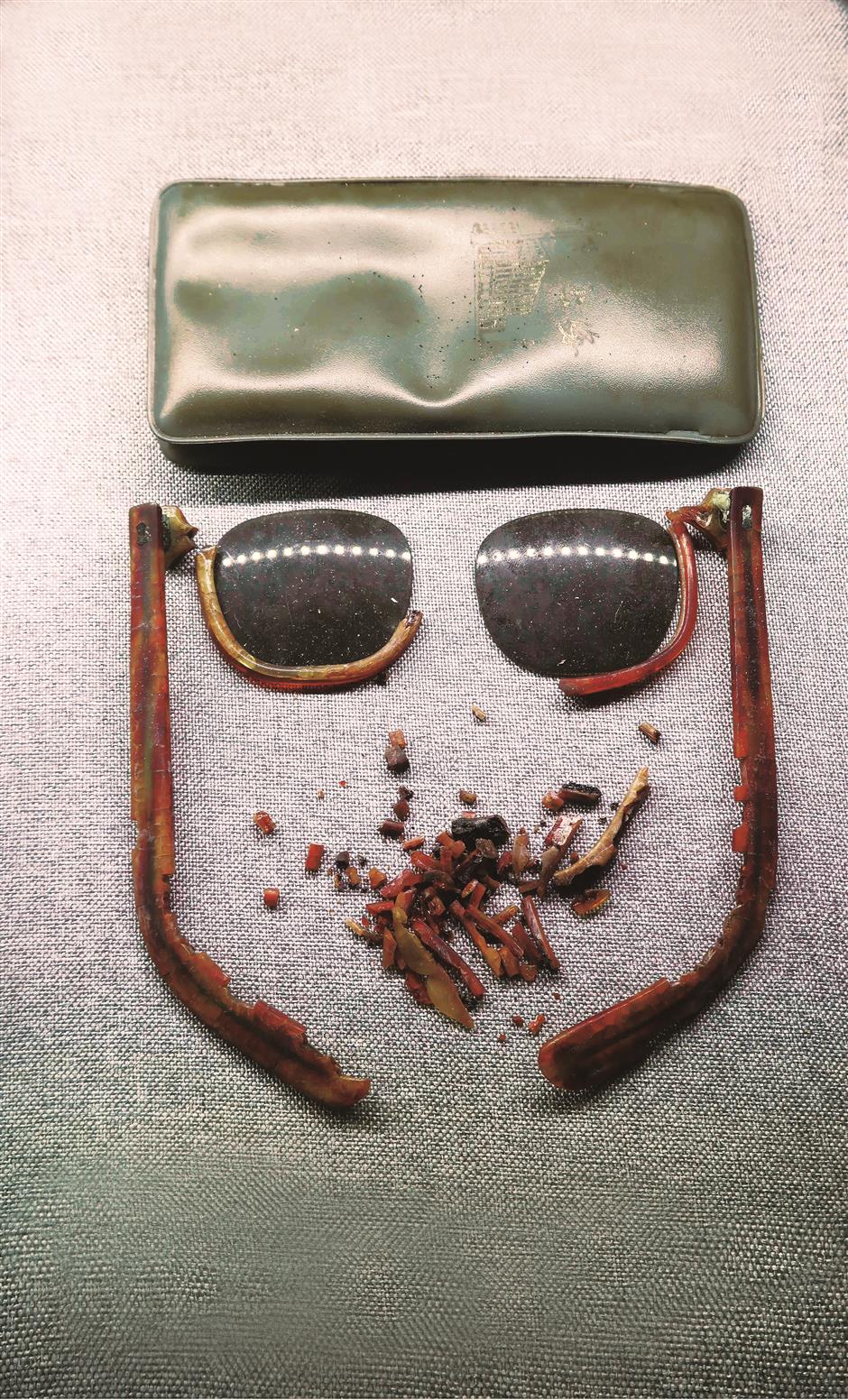 The broken eyeglasses of firefighter Wei Shuhai, who was killed in an explosion in 1979. The spectacles are displayed at the Museum of Public Security.

Crime, weapons, police, prison. The fare of many TV drama comes to life in a 20-year-old museum that never loses its public fascination.

The Museum of Public Security, the first of its kind in China, has a rich collection of guns, bullets, weapons, handcuffs and fetters; replicas of prison cells, old-time execution rooms and gallows; and memorabilia from infamous crimes, including Shanghai's first “body dismemberment” case in 1954.

Located on Ruijin Road downtown, the museum is a tribute to heroes and martyrs, justice overcoming evil, criminal investigation and maintenance of public order.

It holds more than 20,000 exhibits, including historical relics like Baby Browning pistol once used by Sun Yat-sen (1866-1925), founding father of the Republic of China.

The story of public security begins in 1845, when Britain, the US and France established settlement enclaves in Shanghai. Municipal councils formed in the settlements included police, marking the city’s first formal police organizations.

A gallery of the history from that era onward includes more than 1,000 items arrayed in chronological order, giving visitors a visual summary of Shanghai police services before 1949. The items include old police magazines, police whistles, badges and a replica of a front gate of the Shanghai Patrol Station in 1907.

After the People's Republic of China was founded in 1949, the Police Security Bureau of Shanghai was established. Its targets were criminals, spies, enemy agents and gangsters.

When the bureau was first set up, 31 official seals of police stations in each of the city’s district were carved. They were actually re-carved from the old police seals of the Kuomintang regime. Six of the seals are displayed at the museum.

The museum also has an old-fashioned telephone and box key from the 1950s. The phone was installed on the street, locked in a box, for patrolmen to use to report emergencies.

The “Wang Yunwu Dictionary” was a code book of Shao Jian, director of the Shanghai Police Affairs Commission, who cleverly hid more than 500 policemen's serial numbers in the book to counter espionage in the 1950s.

The gallery of criminal investigation is probably the most popular section of the museum. Its displays of evidence, photos of crime scenes and criminal tools are gleaned from the city's most major cases of the past 50 years.

Two gold teeth on display come from Shanghai's first “body dismemberment” case. In 1954. Cheng Niaogen murdered a prostitute, and dismembered her body after stealing her gold accessories. When he was about to wrap his victim’s head with a newspaper, he found two gold teeth in her mouth. Cheng pulled them out and then threw the dismembered body parts in different dustbins.

Two street cleaners found the bloody head and called police. One day later, Cheng was captured and subsequently made a full confession.

Today, a ripple of chill fills many visitors viewing the yellowed police documents, the photos of dismembered body, the kitchen knife used in the crime and the two gold teeth that still glitter on a windowed shelf.

The museum shows how the development of technology modernized criminal investigation equipment and procedures. It documents the ace detectives who unraveled many big cases.

In 1988, Shanghai Hongqiao Airport reported that a large volume of dead fish was found in a shipment of carp. Further inspection showed heroin hidden in the stomachs of the dead fish. Under the leadership of the Ministry of Public Security, Shanghai police for the first time collaborated with police from Hong Kong and the US to successfully recover 4.4 kilograms of high-purity heroin, dealing a heavy blow to an existing drug trafficking syndicate.

Three fish specimens are exhibited in the museum.

In 1997, the "head knocking case" caused widespread social panic. More than 10 women walking alone at night in the Yangpu and Baoshan districts were attacked with axes and robbed.

Within a month, Shanghai police arrested Wei Guangxiu, an escapee from an Anhui Province prison. His axe, chilling photos of the victims and a gold necklace stolen in the crime spree are on display.

In modern days, the prison site is used as a special school to educate and reform people. It displays a chess set that allows three players to compete together. The chess set, invented by a prisoner, has a national patent.

Firefighting is also included in the public security system. The museum displays some of the city's oldest firefighting equipment, including a water pump made of two buckets, introduced from Japan during the Qing Dynasty (1644-1912). 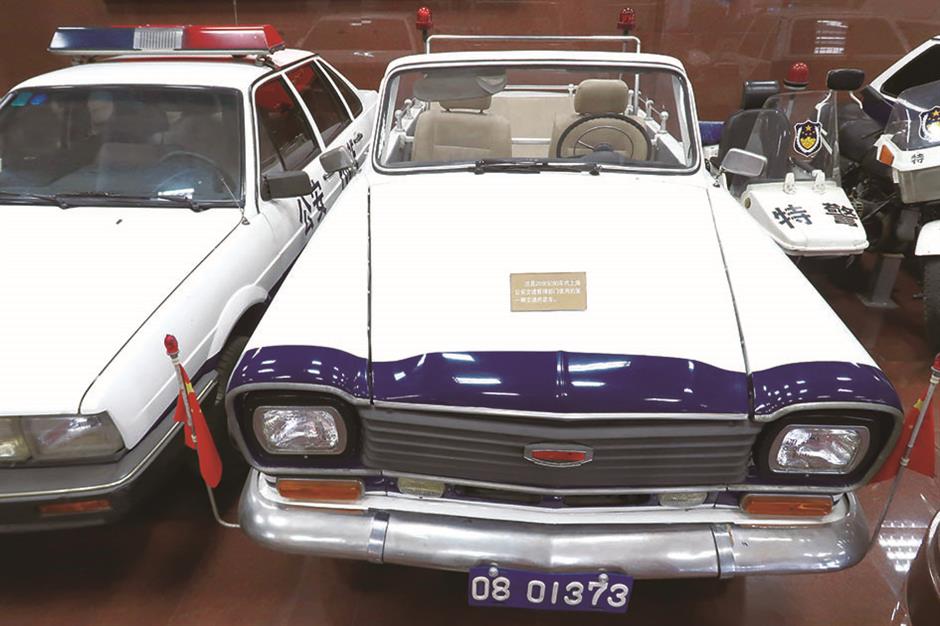 Old police cars of different years are displayed on the museum’s first floor. 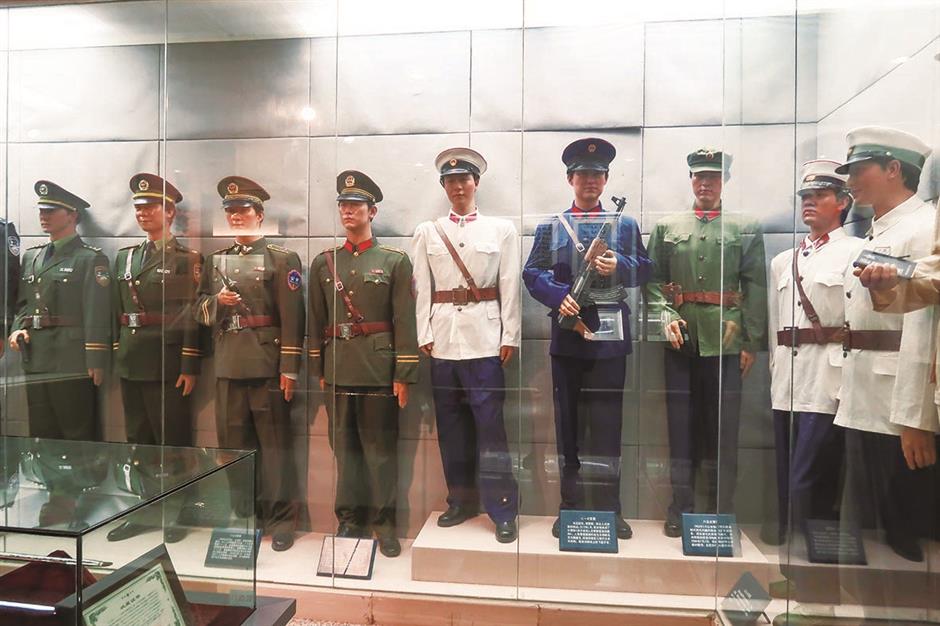 The evolution of Chinese police uniforms after 1949 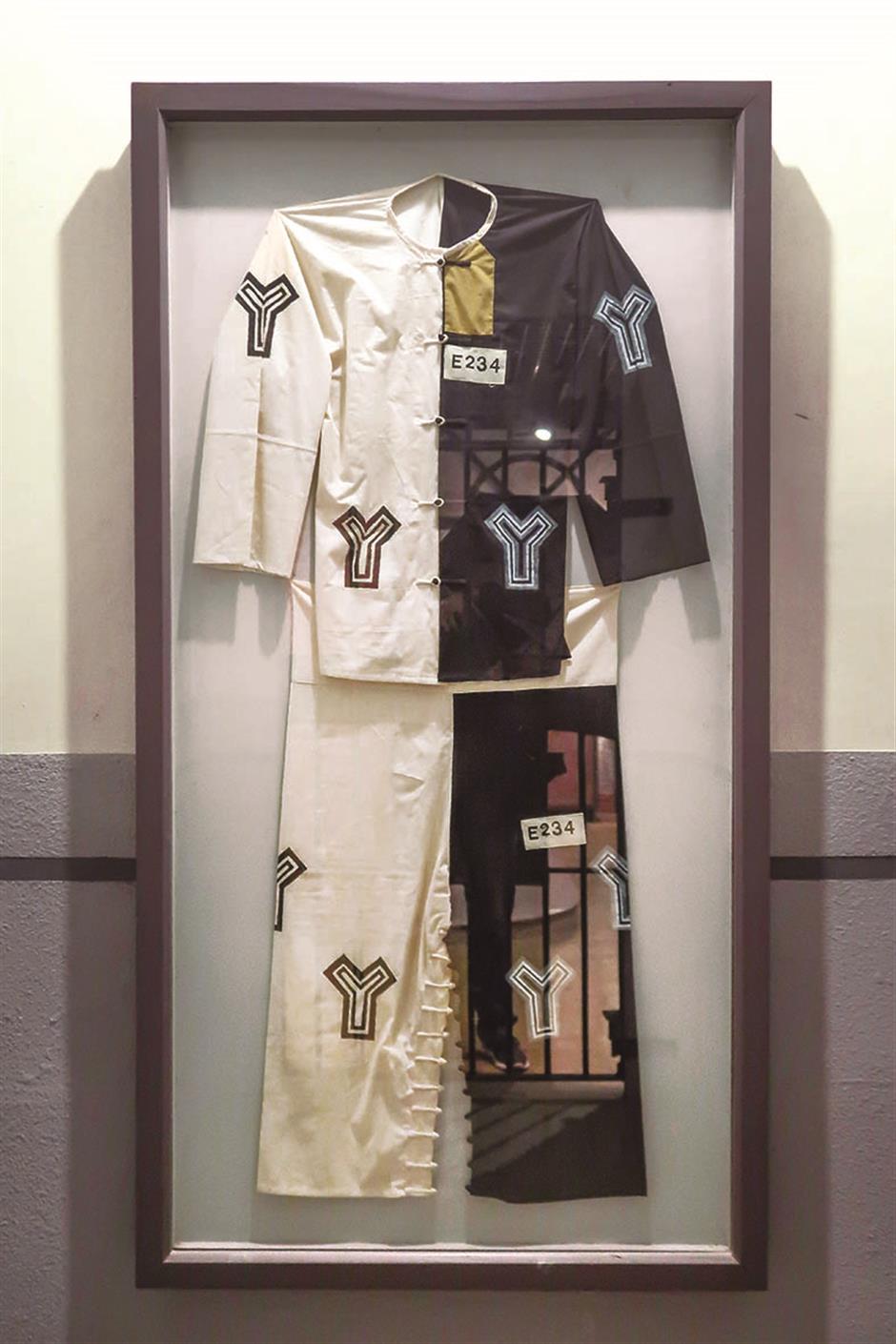 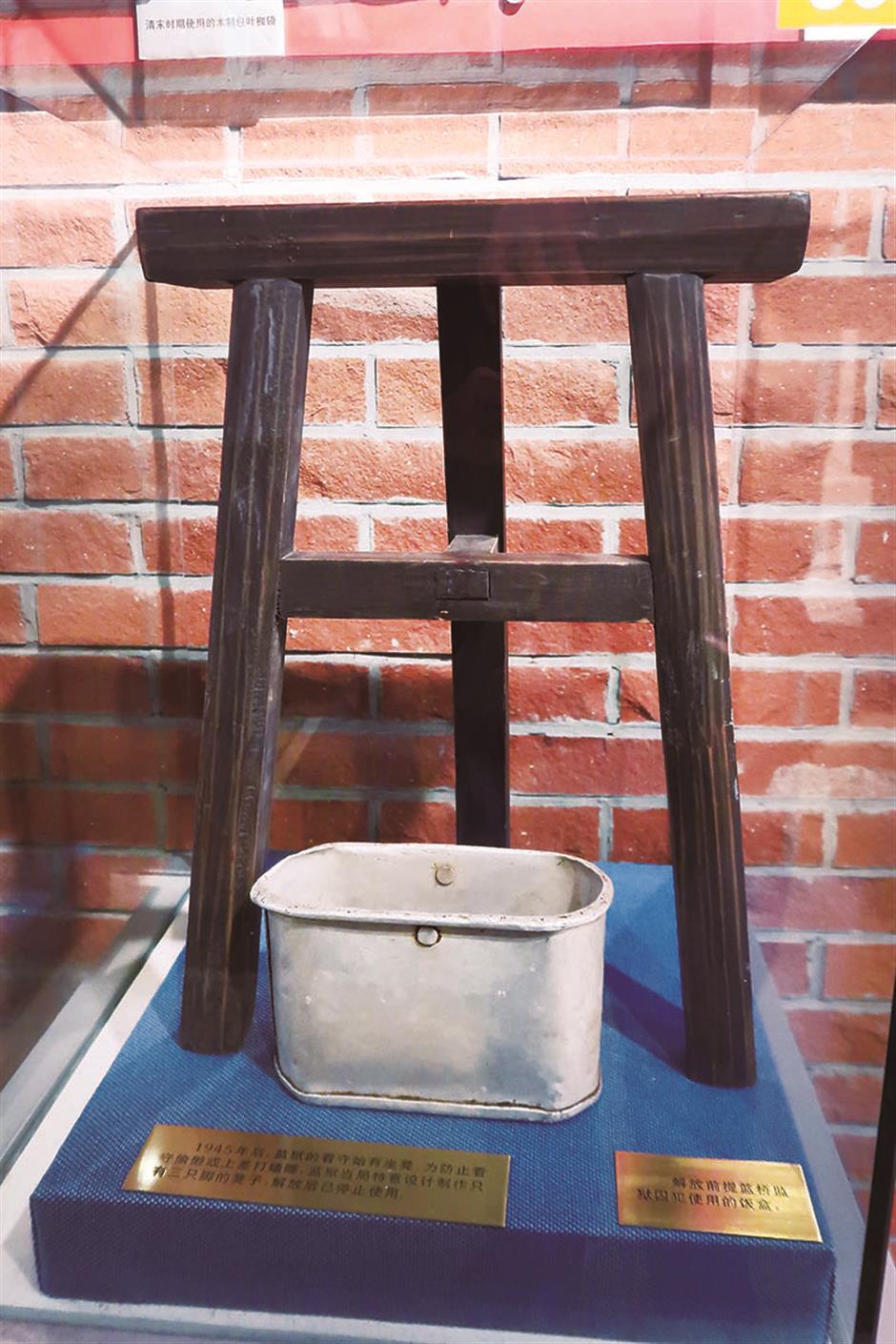 A three-legged stool designed to thwart drowsy prison guards from nodding off in duty in the 1940s. Under the stool is a pre-1949 lunchbox from Tilanqiao Prison. 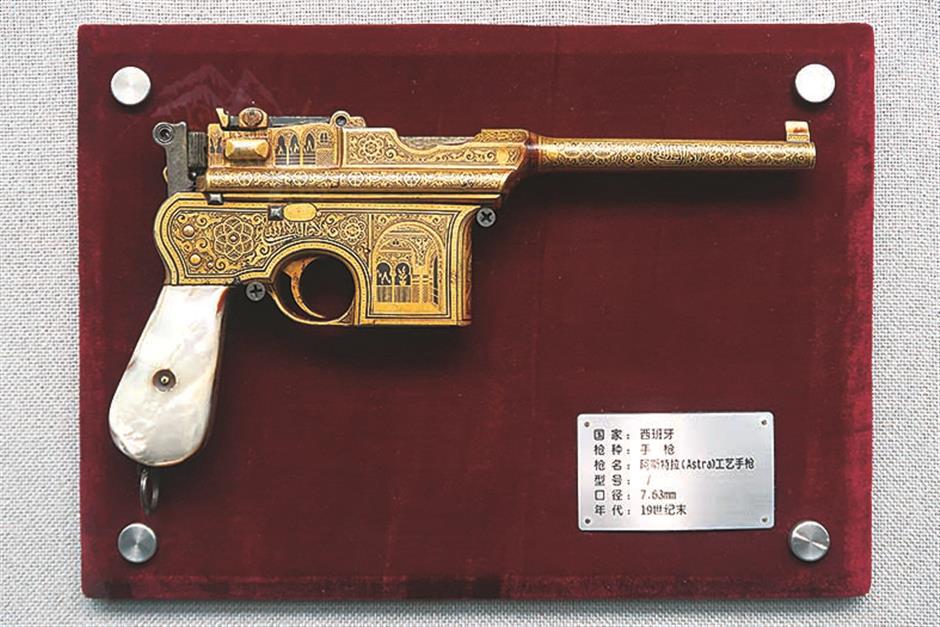 A gun gifted to Sun Yat-sen