Looking down from the hilltops in some areas of central Fujian Province, one may see parts of the forested landscape speckled by what look like huge black rings. Each is actually an ancient defensive structure that housed a commune of people.

The official name of these unique-looking constructions is tulou, or “earthen buildings,” and “unique” is not just a figure of speech. The buildings, which have a history of longer than four centuries, exist only in Fujian.

Today, more than 3,000 earthen buildings still stand. In 2008, some of the clusters were included in the UNESCO World Heritage list.

Tulou are closely related to the Hakka culture, which spanned southeastern areas of China. Over the centuries, the Hakka people absorbed the cultures of the Han people and local aboriginals. Earthen buildings are regarded as a crystallization of different cultural concepts.

It is believed they evolved from ancient barracks built as a defense against banditry. Most of the tulou are up against mountains that provide not only good fengshui but also good defensive positions.

Among all the towns and villages where tulou are scattered, Nanjing and Yongding are the most visited and boast the best-preserved earthen buildings.

The special nature of the Tianluokeng cluster, which is nicknamed “four dishes and a soup.”

The Tianluokeng cluster in Nanjing

There is the story that in the 1960s, US satellite images picked up the Tianluokeng cluster, leading the US military to think it might be a Chinese nuclear-weapons development site.

The story is no more than a joke, but it does highlight the unusual nature of this cluster, even among earthen buildings.

The oldest building in the cluster is the square “soup,” whose official name is the Buyun Building. It was first built around 1670, but the original building was destroyed in a fire in 1936. It was rebuilt 20 years later. The four “dishes” of the construction were built early in the last century.

Like most other tulou in the area, the earthen buildings were constructed of sedimentary mud missed with sand and lime and then compacted. The concrete also contained a mixture of glutinous rice, brown sugar and egg white — all in strict proportions.

Local Hakka people believed that the extra material would make the concrete as solid as stone and impervious to wind and rain. It may sound crazy, but they were right. The tulou survived hundreds of years of sun and rain, and would all still be standing if not for man-made disasters.

From the central yard, the tulou looks like the multistory siheyuan structural pattern from Beijing, except there are no windows on the first floor, only narrow slits on the second and large windows on the third. The design was aimed at preventing bandits from breaking into the buildings from lower windows. 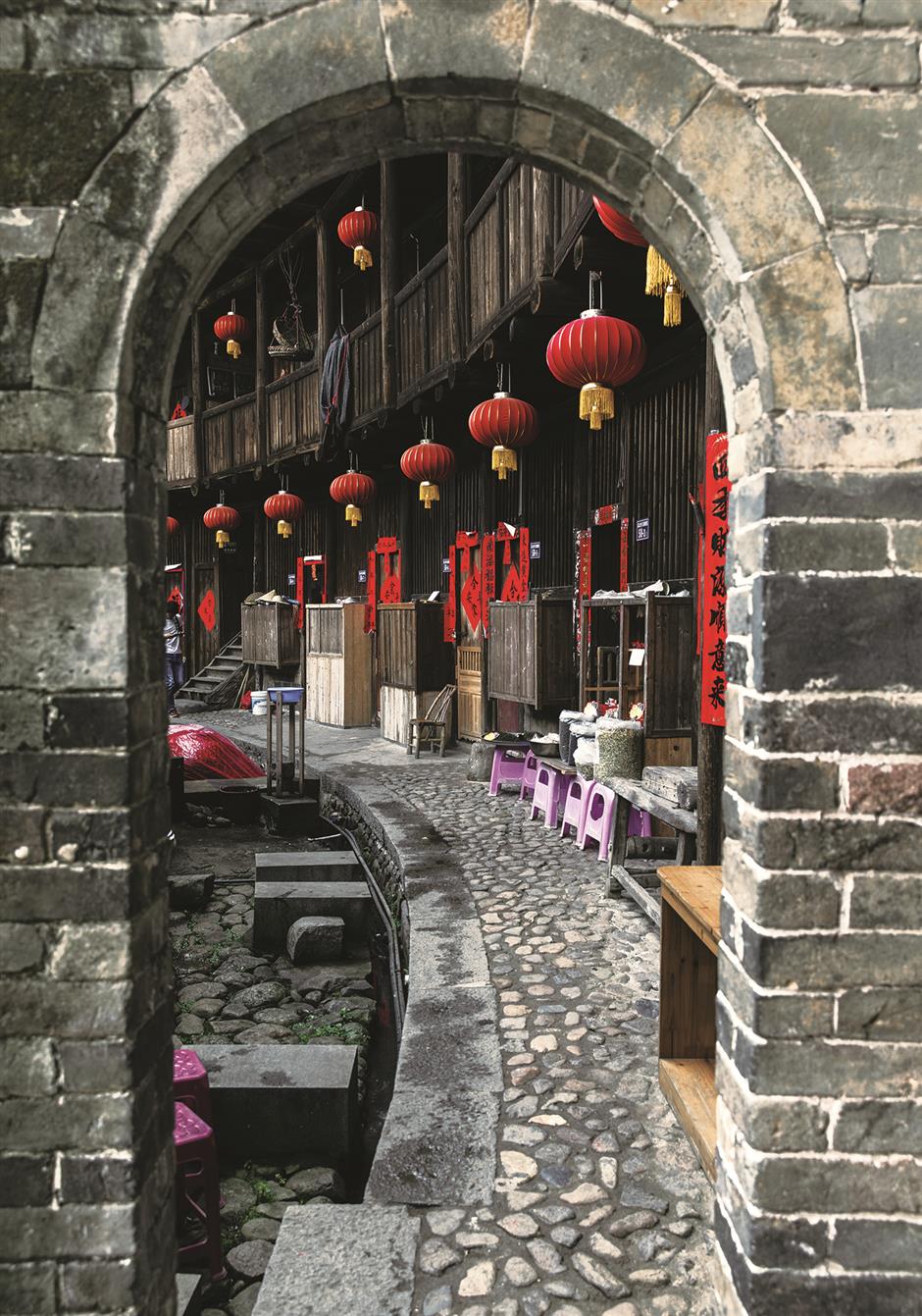 Red lanterns and couplets brighten up the gray and brown pallor of interior tulou.

The Tianluokeng cluster has been the residence of the extended Huang family since the Qing Dynasty (1644-1911).

In Nanjing, legend has it that the family ancestry traces back to Huang Baisanlang, a poor, young duck farmer who settled in the mountains with the help of a river snail (tianluo) fairy and established roots there.

The snail is a fairy tale but Huang actually existed. According to the family tree, he moved to what is today Tianluokeng around 1800. His memorial tablet is still worshiped in the Huang’s ancestral hall, which is also part of the tulou cluster and sits at the center of all ancestors.

Most visitors are fascinated by the sensation of a lingering vibrant life in the complex. Although some of the rooms have been modified into eateries, stores and guesthouses, a sense of local livelihood still survives in old couplets pasted on doorways, colorful clothes hanging from a second-floor doorway and wells in the central yard that still provide clear water. It’s all somehow cozy.

If time allows, visitors can stay in nearby Taxia Village for the night. The typical Hakka village retains a primitive aura, with cobblestone passageways, clear creeks and smaller tulou scattered about. Some of the rooms in tulou have been modified into hostels with clean rooms and reasonable prices.

Many hostels provide authentic local cuisine and can arrange charter tours for visitors wishing to go to various tulou sites in Nanjing.

The Chengqi Building is praised as the “king of tulou” because of its grand size. Although the name of the building is in singular form, the tulou actually comprises four buildings in the shape of concentric circles.

There are altogether 400 rooms in the building. In the center is the ancestral hall of the Jiang family, who built the complex. The outer rings are storerooms, guest rooms and master rooms.

The very outer ring of the building looks like a circle of townhouses. Every family has a three-story unit, but the building has only four public staircases. All the first floors are kitchens — and now some of the them have been modified into stores and eateries just as in Tianluokeng. The second floors are storage areas, and the third floors are for living rooms and bedrooms.

It means that if you want to take a nap after lunch, you have to go out of your home, find the nearest staircase and go upstairs to your bedroom.

Another interesting feature are the sound transmission holes on the exterior walls of each unit. Every night, the gate of the building was locked, and before cell phones became all the rage, people coming home late would have to call out to their families to come down and open the gate for them.

Family doorways are given different names and decorated distinctively so that residents have no trouble finding home easily.

Local records show that the building was first constructed in the late Ming Dynasty (1368-1644) and was finally finished with three generations’ efforts.

The original ancestor of the tulou was Jiang Jicheng, a farmer of great insight and talent. He was keen on education, so many of his descendants were high achievers.

The family’s fortunes are revealed in the building, including dozens of inscribed boards written by historical figures.

The most precious relic is a screen presented to Jiang Jianyong, second son of Jicheng, in 1754 for his 71st birthday. The screen is composed by 12 nanmu boards with exquisite carved reliefs of landscapes, plants, animals and people. The screen also contains articles written by two then high-ranking officials who praised Jianyong’s noble personality.

For visitors willing to bear relatively basic accommodation, spending a night in the building is a great way to soak up the atmosphere. Some locals solicit overnighters in front of their homes and provide a room once the price is negotiated. The rooms aren’t air-conditioned, so it can be quite hot in late spring or summer. The rooms also don’t come with their own bathrooms. All toilets and bathing facilities are in a building outside the tulou.

The real side of life in tulou comes in the evening, when most tourists have left and locals set about preparing meals and for life the next day. Children play on a lawn in front of the building, and food aromas permeate the air. As night falls, local life begins. 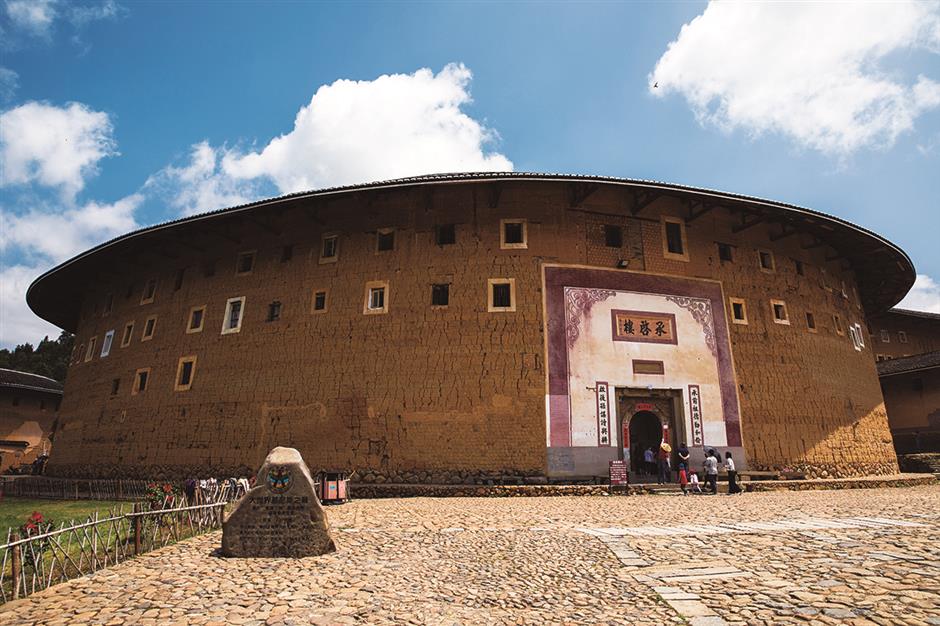 The Chengqi Building in Yongding is praised as “king of tulou” because of its grand size.

Nanjing and Yongding are quite far from major Fujian cities such as Fuzhou and Xiamen. It takes a bit of planning to reach the tulou clusters.

The nearest city to Nanjing is Zhangzhou, which is connected to Shanghai by train. From the Zhangzhou West Railway Station, there are long distance buses going to the Nanjing Bus Station, where shuttle services to tulou sightseeing areas are available.

There are also buses going to Chengqi Building from the Zhangzhou Railway Station.

﻿
Special Reports
﻿
61820
,
For a spring break, take a stroll in our beautiful backyard
Been there, done that? Not at these quirky sites
B&Bs in rural areas add artistic flourish to farmland holidays
Xiangshan awakens with arrival of spring
Hangzhou abounds with festival activities
A step back in time in any language in Songjiang
Fudan University founder's home is renewed
Mount Chaoshan celebrates plum blossoms with cultural activities
All aboard for a culinary excursion that will tantalize the taste buds
An excursion that gives us something to think about
EXPLORE SHINE