Off the tourist trail, neglected gems along Line 3

Metro Line 3 subtly avoids the most popular business areas and the sightseeing circuit, keeping them just at arm’s length. Along the north-south line stretch residential complexes, old and new, one after another. But that doesn’t mean there aren’t some worthy stops along the route to find hidden gems easily overlooked by most tourists to Shanghai.

Duolun Road is full of old Western-style villas built in the 1920s and 30s. Despite efforts to renovate the area into a commercial zone like Xintiandi or Hengshan Road, the road has managed to avoid over-commercialization.

The merits of that may be open to debate, but for visitors, it is definitely a good thing because they can experience the real vibes of life in this historical part of the city.

Two dramatically distinct groups had homes in the area in the early part of last century. One group was comprised of writers who formed the League of Left-Wing Writers in 1930, when the road was called Darroch Road.

The league was founded at the then China Art University, which is now a museum to commemorate the founding writers, including Lu Xun (1881-1936) and Ding Ling (1904-86). The museum is under renovation and won’t reopen until October.

The other group was comprised of Kuomintang heavyweights who opposed the ideology of the left-wing writers.

Banker and politician Dr H.H. Kung (1881-1967) resided in a Spanish-Islamic-style mansion, which is still inhabited to this day. The façade of the mansion features Arab-style windows with embossments that are rarely seen in the city. But it’s hard to take a peek inside to see the luxurious décor because the current residents are weary of constant bother from visitors. 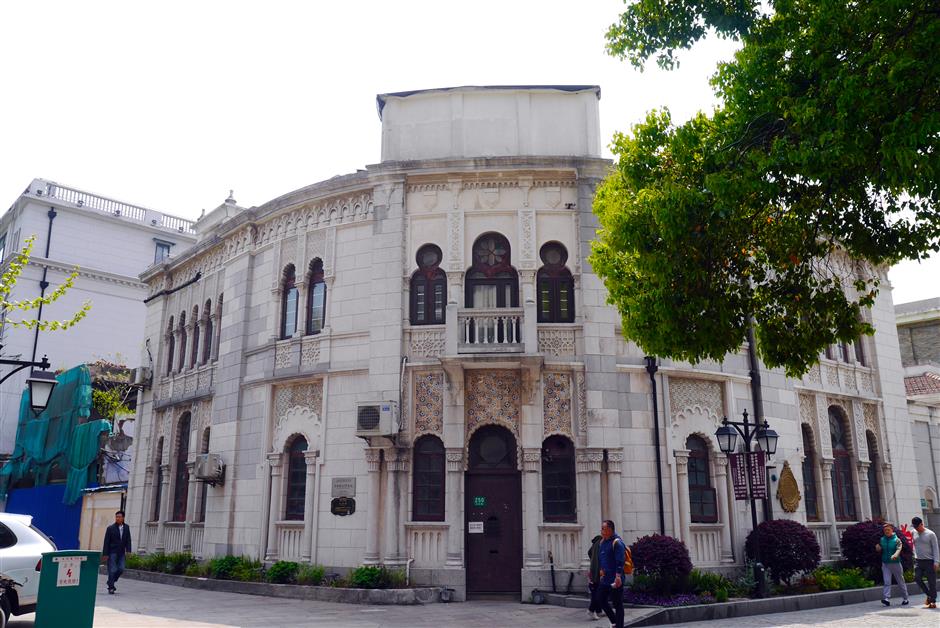 The Spanish-Islamic-style mansion once belonged to banker and politician Dr H.H. Kung.

Next to the mansion is the former home of Kuomintang general Bai Chongxi (1893-1966), which is now a hospital. Bai’s mansion is typical neo-classical architecture, with Corinthian columns and all.

Another unique building on the road is commonly known as Hongde Temple, but its official name is Fitch Memorial Church. It is the only Christian church in Shanghai with traditional Chinese architecture. Built in 1925, the church is a throwback to the concept of “localizing” Christianity in China, which failed in the end anyway.

Under the cornices and above the red pillars is a bright red cross and a Bible excerpt that reads “God so loved the world.” The whole view creates a shocking visual impact at first glance, but brings out a sense of harmony. The church still conducts religious services. Its interior is plain, just like any community chapel. 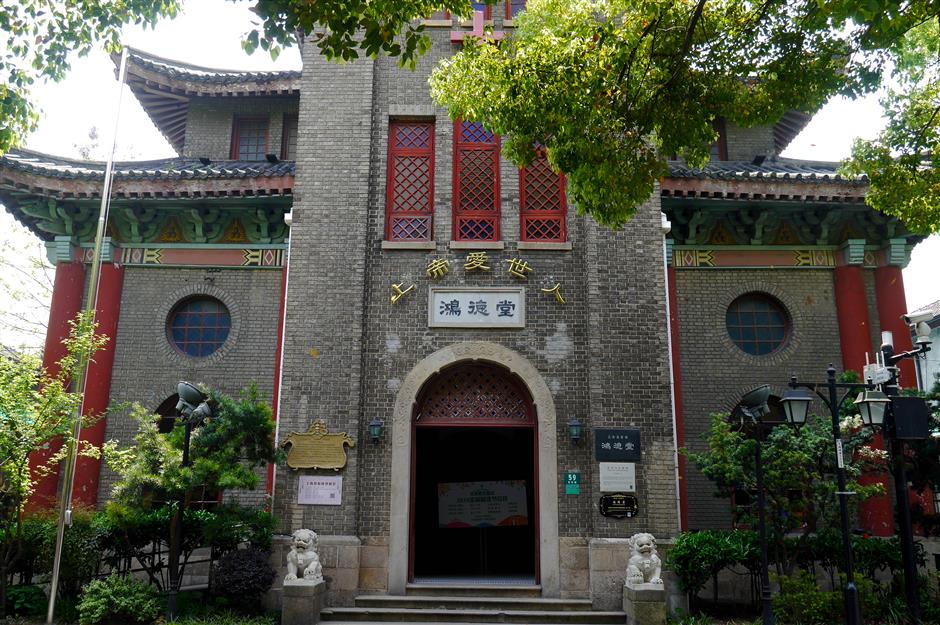 Hongde Temple is a Christian church with Chinese architecture.

The area does attract people trying to milk business value from its rich history.

Most of the shops on the streets are given over to antique collectors and sellers. One of them, the Big Shanghai Museum, stands out more than most. The owner, who identifies himself only as Shen, has collected a huge array of memorabilia from decades ago, such as enameled cups and plates, clocks, watches, rotary dials and Chairman Mao badges.

Stack after stack of the old treasures pile the narrow room, creating a scene that has visitors grabbing for their cameras. The owner is shrewd. He charges 1 yuan (15 US cents) for taking pictures.

After touring around Duolun Road, visitors might enjoy a walk along Tian’ai Road, a small street about five minutes away. The street is nicknamed “the sacred land of love,” mostly because Tian’ai literally means “sweet love.”

How that legend started is unknown. It’s a belief that young lovers walking down the street hand in hand can keep their love fresh for life.

The walls of the street are decorated with love poems, but the more interesting element here is the messages left by random people, either scribbled or carved on the bricks.

People come from all over the city to express their hopes and feelings, such as finding true love, confessing to unrequited adoration, mending a broken relationship or cursing ex-lovers.

Walking along the street, reading the messages conjures up all sorts of stories, both sweet and bitter.

On the pedestrian street of Duolun Road, Old Film Coffee is quite eye-catching with a statue of Charlie Chaplin standing on the terrace.

The building that houses the café is a protected heritage site built in the 1930s. The Western-style villa is decorated in typical retro style, with leather sofas and armchairs, silky curtains with tassels, and black-and-white pictures on the wall.

Just as the name indicates, old movies are screened in the café. Most of them are classics that were extremely popular in Shanghai in the 1930s and 40s, such as “Street Angel.” There are also some Golden Age Hollywood classics, such as “Gone With the Wind” and “Roman Holiday.”

The nostalgic atmosphere offsets the somewhat ho-hum food and drink menu. An afternoon tea is preferable to a formal meal. The rose tea and cakes are among patrons’ favorites.

The museum in Xuhui District is also called the Tou-Se-We Museum, reflecting how Tushanwan is pronounced in Shanghai dialect.

In 1864, a French church founded an orphanage in the Tushanwan area, and along with it an art school was created. For the next century, many of the art masters in Shanghai, such as Liu Haisu (1896-1994) and Xu Beihong (1895-1953), worked as instructors there. Under their tutelage, many of the children who grew up in the orphanage became Chinese pioneers in varied art forms, such as Western-style sculpture and painting, and making stained glasses. Tushan was praised as the “cradle of Western-style arts in China.”

The museum was founded to commemorate that period of history. One of the most precious pieces in the museum is a memorial gate of the orphanage that was built in 1912. Its wood carvings were so exquisite that the gate was exhibited at World Expos in 1915, 1933 and 1939. 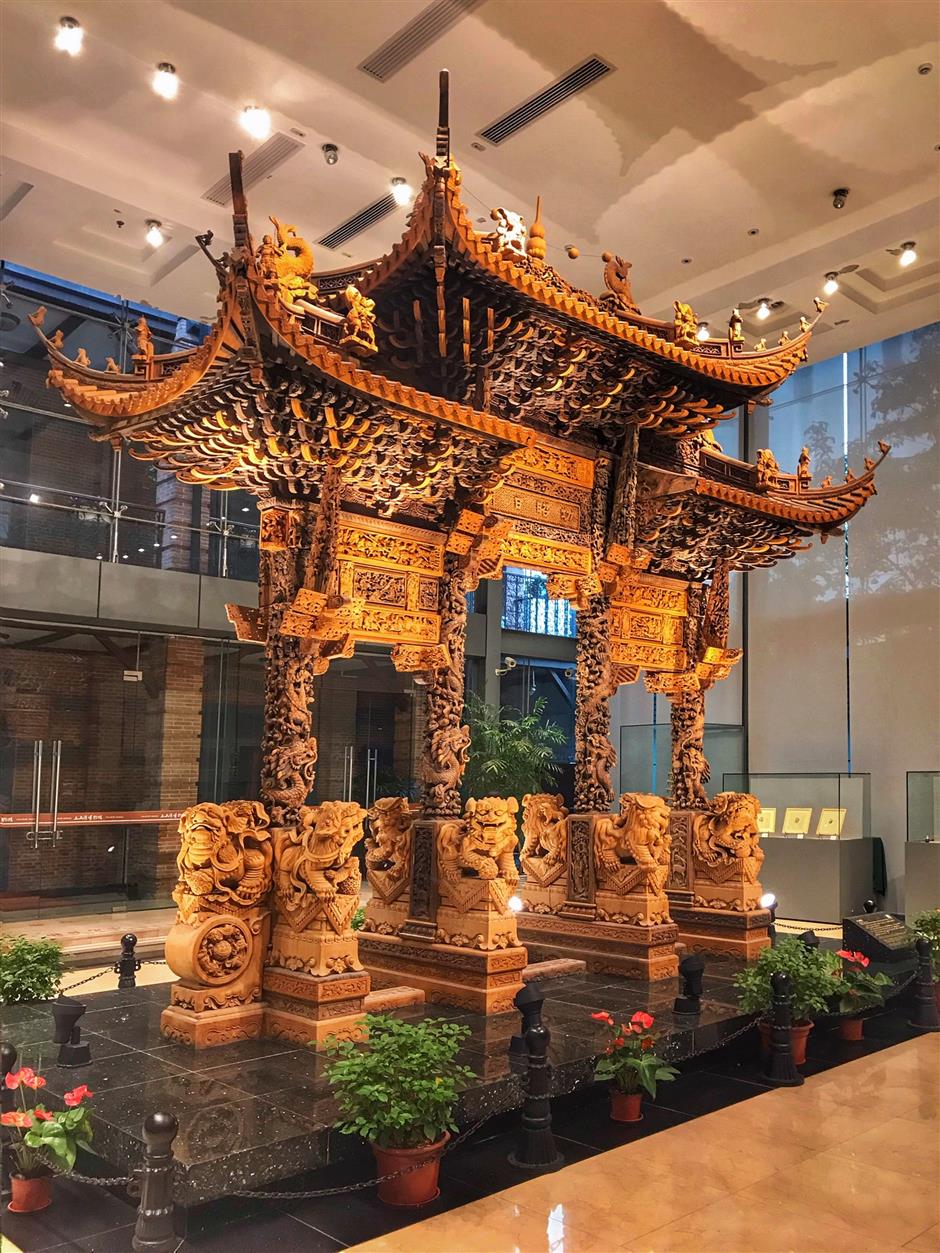 However, the gate didn’t return to China until 2009. By the time it arrived home, it had fallen into disrepair that took 50 experts seven months to restore. The revived masterpiece now sits in the grand hall of the museum.

Other relics include articles from the orphanage, including the remains of Tushanwan artworks that have been displayed around the world.

Among all the restaurants serving Chinese snacks in the area, Fangmenlaojie, which means “the gate and old street,” stands out.

It has steamed pork buns, baked pork pies and wonton — nothing special at first glance. But the ingredients all come from organic farms. Patrons often comment that the snacks are more tasty and fresher than those in other shops.

The owner of the restaurant is from Quzhou, a city in Zhejiang Province. He boasts that his snacks are “good enough to be displayed in museums.” Museum prospects notwithstanding, the eatery is packed every lunch time.

Although Shuichan Road Station is nearly 3 kilometers from the park, it’s still the closest hopping-off point to the site near Wusongkou Wharf in Baoshan District. If one doesn’t mind a short hike or cab ride, going to the park by Metro Line 3 is a good choice.

Paotaiwan means “the fort bay.” The area served as a coastal fort in the 19th century. In 1842, when a British fleet attacked the wharf, General Chen Huacheng (1776-1842) led an army to repel the invaders. Though the cannons at the fort managed to sink several ships, the defenders still lost the battle and Chen lost his life.

The fort now still keeps a cannon, or ping yi jiang jun, used in the battle. The name of the cannon means “the general who defeated barbarian foreigners,” which seems now to be no more than a wishful thinking. 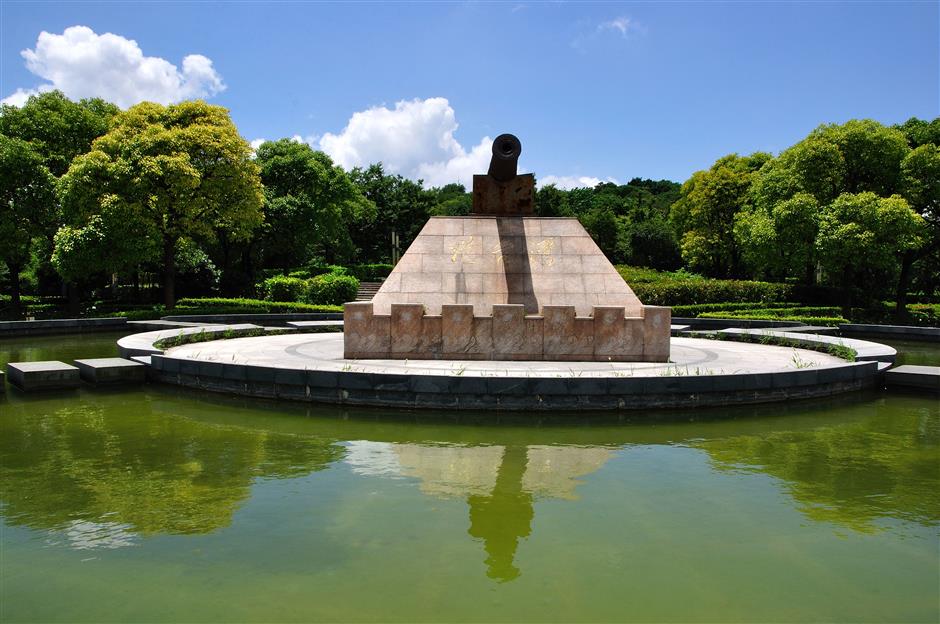 An ancient cannon in the wetland forest park

The park is not only a good place for people to look back to the past but also a site to enjoy fresh air, a coastal wetland, and trees and greenery. Pack a tent, a kite and a picnic basket, and a trip to the park can offer a relaxing, bonding-with-nature weekend.

Like many large parks in Shanghai, the wetland forest park has a barbecue area that provides grills and food. Meat, seafood and vegetables are all available, but visitors need to bring cooking oil, brushes and seasonings, and also book well in advance.

A barbecue may seem like nothing special, but the park’s seaside location adds a special touch to eating “en plein air.” Children especially will enjoy such an outing because of a large lawn area perfect for playing. Visitors can also try their hand at catching crab on the beach.

The nearly 100-year-old park was originally the family graveyard of a textile magnate named Cao Zhonghuang. Nowadays, it is known as one of the best places in Shanghai to enjoy flowers — peonies in the spring, osmanthus in the autumn and plum blossoms in late winter.

It is, however, a pity that most of the plants here were transplanted after the original vegetation was destroyed during war in the 1940s. Still, eight century-old peony bushes survive to this day.

When the park was finished in 1935, Cao introduced peony bushes from Anhui Province, all grown during the Qing Dynasty (1644-1911). Now, together with other hundreds of other peonies, they embody a fragrant sea of color every spring.

Even if the year’s blooms are nearly spent, the park is worth a visit. Rockeries, ponds and waterside pavilions create a tranquil Chinese-style garden right in the midst of a very busy residential area in Xuhui District.

The park is a favorite of senior citizens and children when the weather is fine.

In an area that is basically a huge residential complex, it’s best to “eat like the locals,” even if that means a plate of meatballs at the nearby IKEA store.

Among limited options, Shiweijiamian Noodles is worth a try. The noodle house mainly serves stewed noodle soup, with rich broths of chicken, duck or yellow croaker.

It also services dishes with seasonable vegetables. In spring, scrambled eggs with Chinese toon leaves is a highly praised dish because the fragrant scent of the leaves blends perfectly with the rich, soft flavor of eggs.