Marriages made in heaven in this romantic city 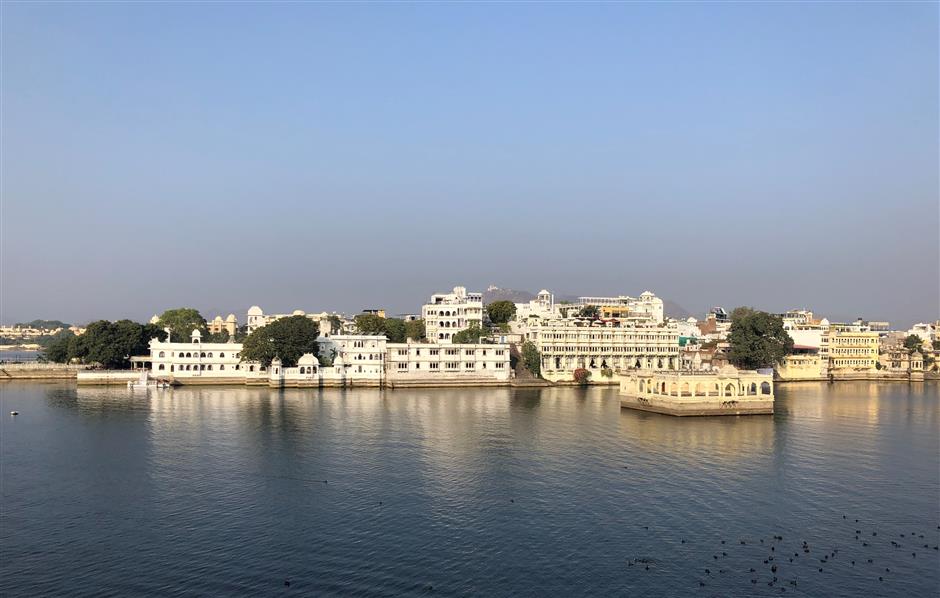 Famed as the most romantic spot in India, the small city of Udaipur is a charming place.

Chances are, if you are in Udaipur, you would probably come across newly married couples strolling through the city or simply enjoying a casual boat ride at one of its many famous lakes.

Named after Maharana Udai Singh II — the 53rd ruler of the Mewar dynasty, who established his capital here in 1558 — Udaipur is known for its heavenly weddings.

During our short stay in India, we came across several weddings, sometimes two in a day. All were characterized by capering gaiety and a nervous-looking groom on horseback. A loud band, bright colors and exuberant dances are part of the day and night-long celebrations.

They have their own charm.

Located literally in the desert land of Rajasthan, a lot of its appeal comes from its sophisticated lake system, and its beautiful, regal palaces — some of them wedding venues of the rich and the famous. 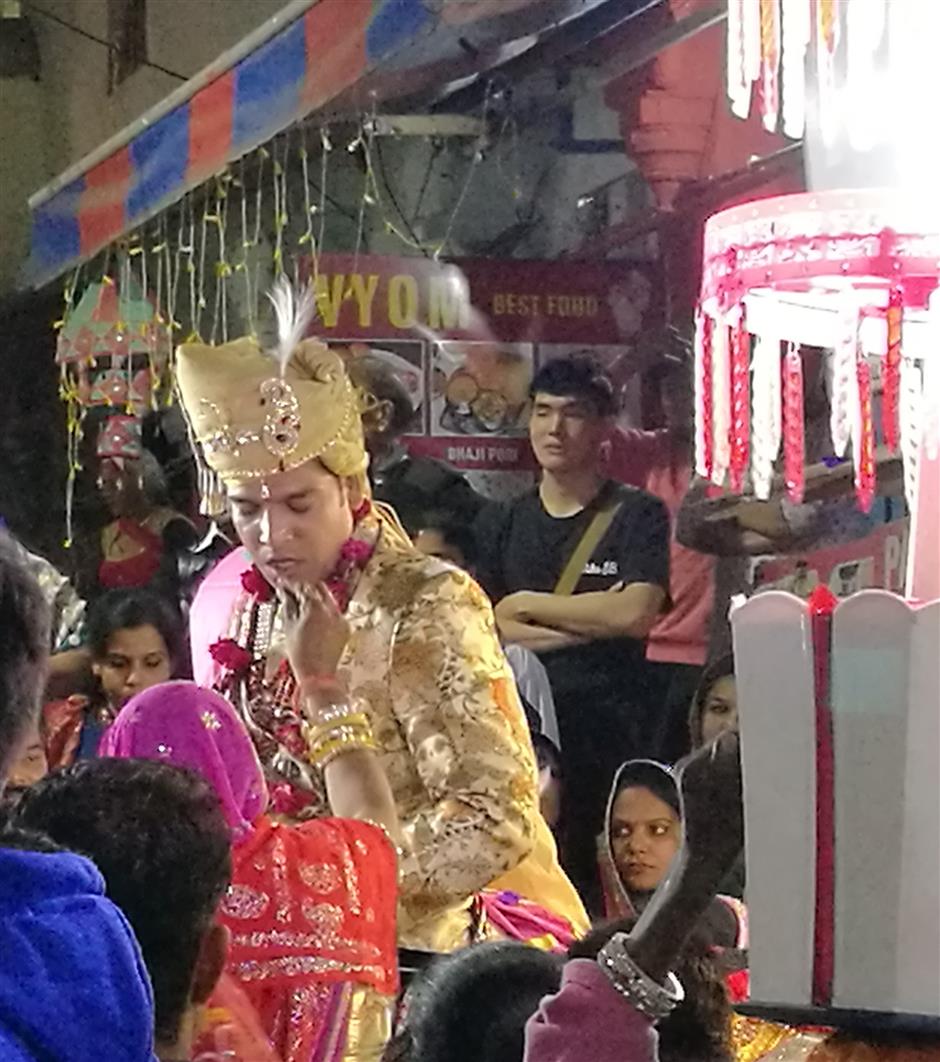 A groom on a horseback is blessed by relatives before heading off to the bride's house in a procession.

Last December, the wedding celebrations for Isha Ambani — the daughter of Mukesh Ambani, one of Asia’s richest men — and Anand Piramal, a real estate developer and scion of another prominent business family in India, became the subject of intense public fascination. The City Palace in Udaipur was among the venues for the pre-wedding festivities.

About 2,000 people from around the world were invited to the weeklong event. The A-list guests included the former US secretaries of state Hillary Clinton and John Kerry, who reportedly danced to bhangra, a type of pop music from India’s Punjab region. Even Beyonce flew in to perform a 45-minute private concert, with several costume changes.

We reached Udaipur around 6:45pm and left immediately for Bagore-ki Haveli for some local performances. The haveli, or mansion, is an 18th century construction that has been converted into a museum showcasing Mewar art and architecture. In the evenings, the place puts on one of the best folk dance shows of Rajasthan — the Dharohar Dance. For an hour, the performers dance to Rajasthani music wearing brightly colored ethnic dresses.

Fortunately or unfortunately all seats were sold out by the time we arrived, so we decided to sit by Lake Pichola to unwind for the night. Under the full moon, the majestic and shimmering waters of the lake give the ancient city of Udaipur a sense of weightlessness. The Aravalli mountains provided a breathtaking backdrop to the city and the lake, which was primarily created by building dams to meet the drinking water and irrigation needs of the city and its neighborhood. 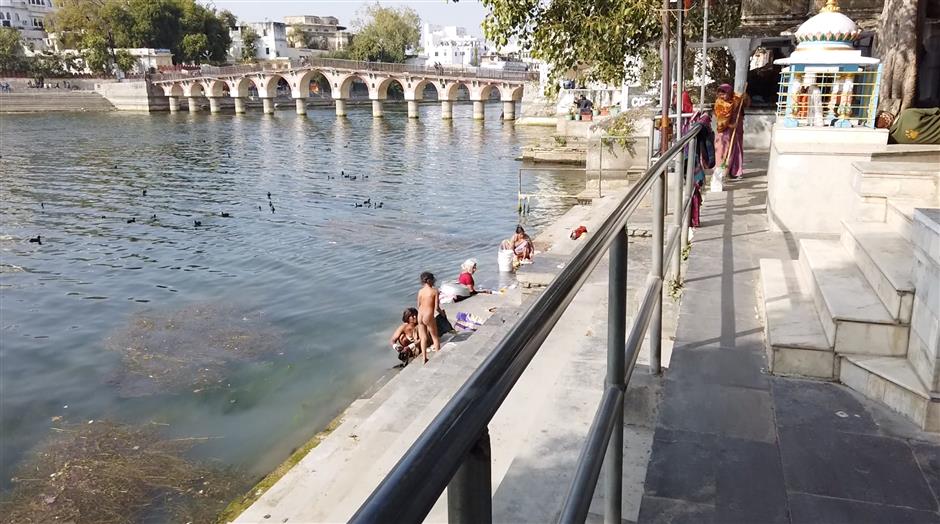 Women bathe and wash their clothes by the side of Lake Pichola. 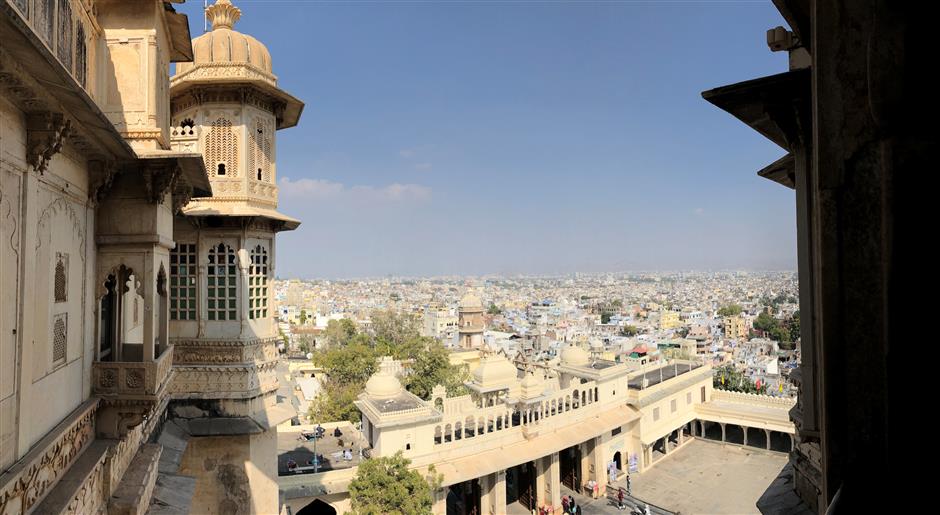 A panoramic view of Udaipur from the top of the City Palace. It is also known as the White City because of the extensive use of white marbles.

The next day we paid a visit to the legendary Udaipur City Palace. With the royal families still residing at the rear of the complex, the palace is finely conserved. The main part of it is open as the City Palace Museum, with rooms extravagantly decorated with mirrors, tiles and paintings, and housing a large and varied collection of artifacts, such as bamboo cages for birds, the man-powered hanging fans and a pair of spectacles worn by actor Ben Kingsley in the film “Gandhi.”

The Surya Choupad (Assembly Room) features a huge, ornamental sun — the symbol of the sun-descended Mewar dynasty — and opens into Mor Chowk (Peacock Courtyard) with its lovely mosaics of peacocks, the favorite Rajasthani bird. The southern end of the museum comprises the Zenana Mahal, or the royal ladies’ quarters, built in the 17th century. It now contains a long picture gallery with lots of royal hunting scenes, some of which show warhorses in baby elephant masks to confuse the mother war elephants during battles. 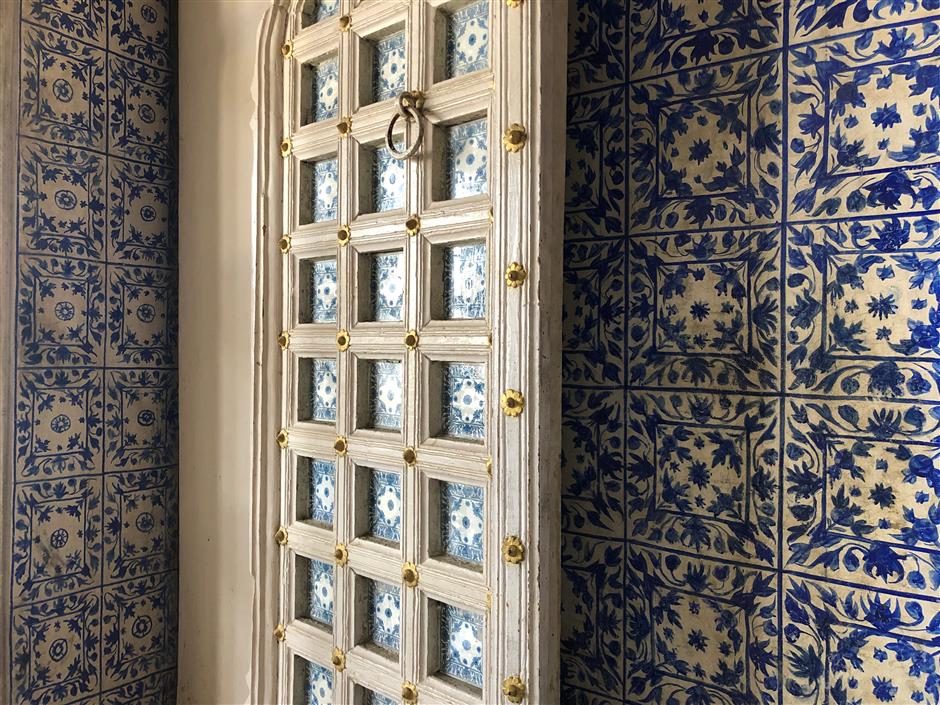 One of the balconies in the City Palace is decorated with blue and white ceramic tiles from China. 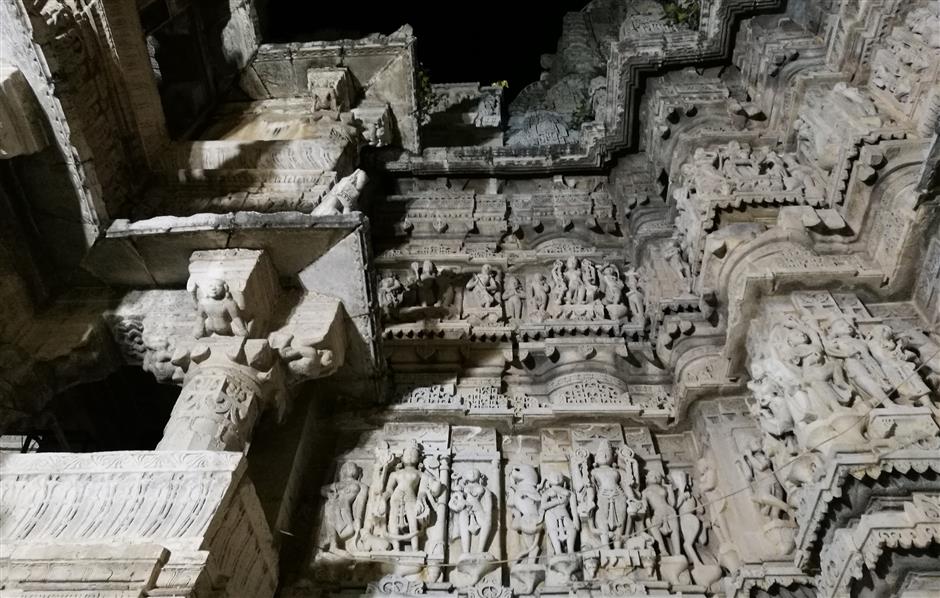 The lavish stone carving at the Jagdish Temple

A short walk from the City Palace is the Jagdish Temple, which was built in 1651. Everyone has to take off their shoes to enter. The temple sanctum has an idol of Lord Vishnu, carved out of a single black stone. The outer part of the temple, with a steeple nearly 20 meters high, is decorated with beautiful elephant carvings and sculptures, giving detailed information about the rulers and the local customs.

We met a miniature artist at work on the temple terrace. From a distance, his art looked beautiful. On closer examination, it was a delicate brushwork with fine photographic details, capturing even the eyelashes on a character. The paintings were mostly scenes of loving couples eating together and relaxing in the courtyard, the royal weddings of medieval times and the last intense elephant fight that reportedly also happened in Udaipur.

Small wonder then that everyone calls Udaipur India’s most romantic city.

As evening approached, the local people poured in to sit around the temple hall to recite prayers. The ceremony was open for everybody, including tourists. In the end, the priest would give away “prasad,” or religious offerings of crushed sweets, to anyone who wanted them. A short glance from the religious activities, I noticed an old man in tears, sitting forlorn, long after the sermon.

Alone in a crowd. 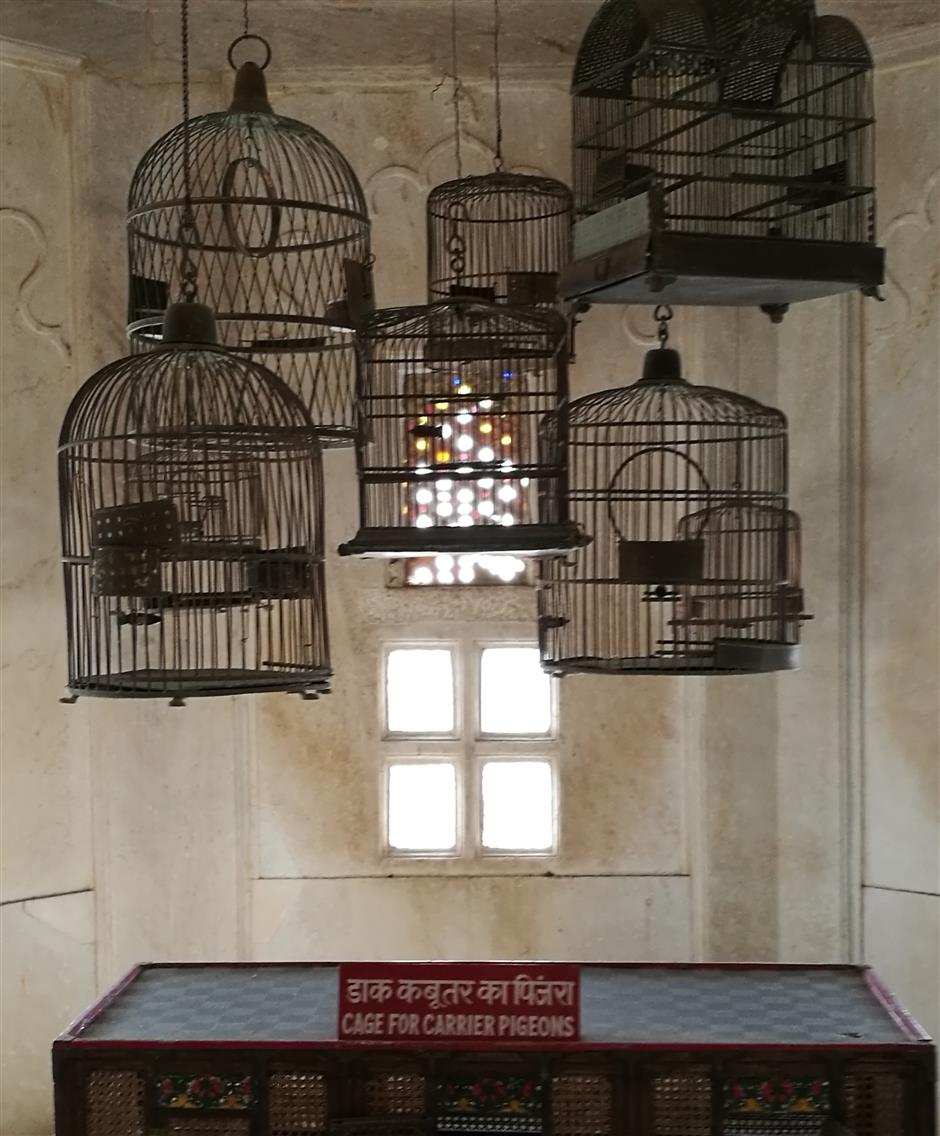 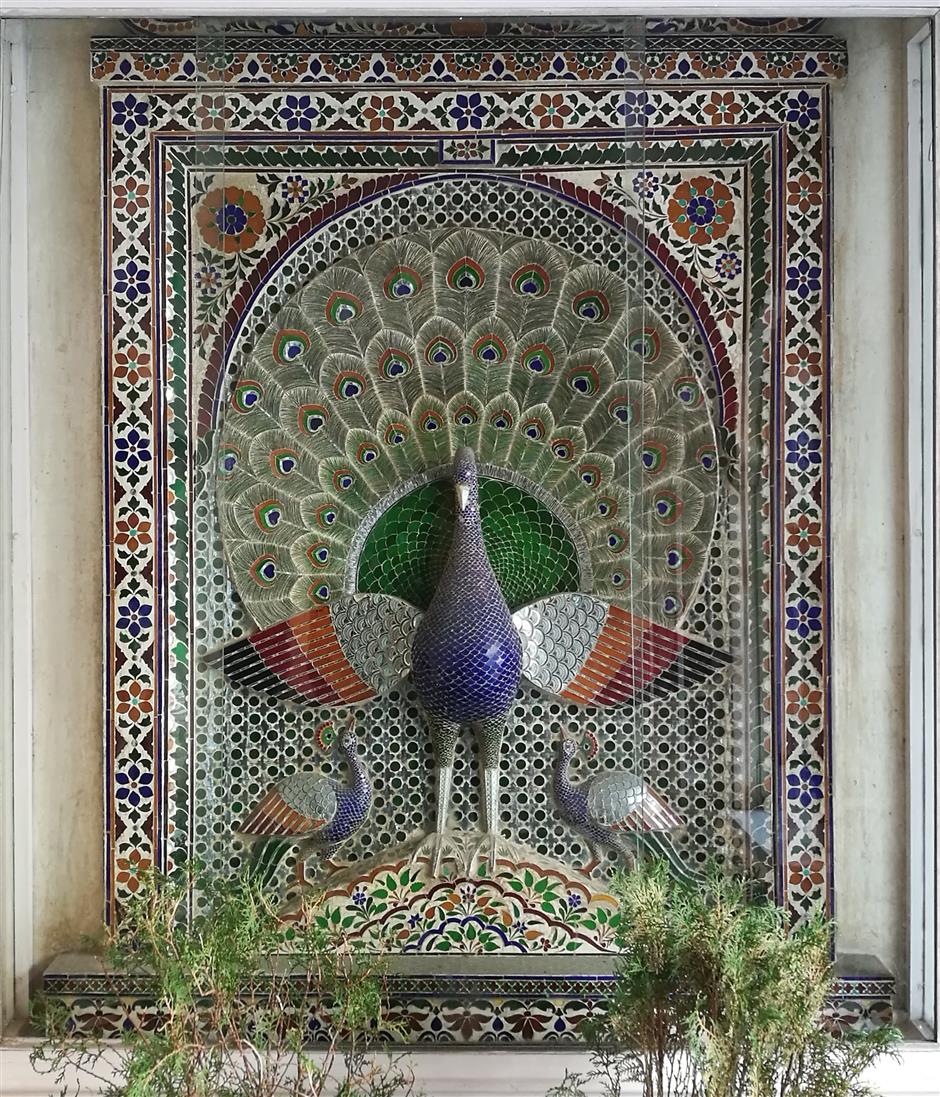 A peacock mosaic at the Mor Chowk