Inside and out, stunning tribute to a city's culture 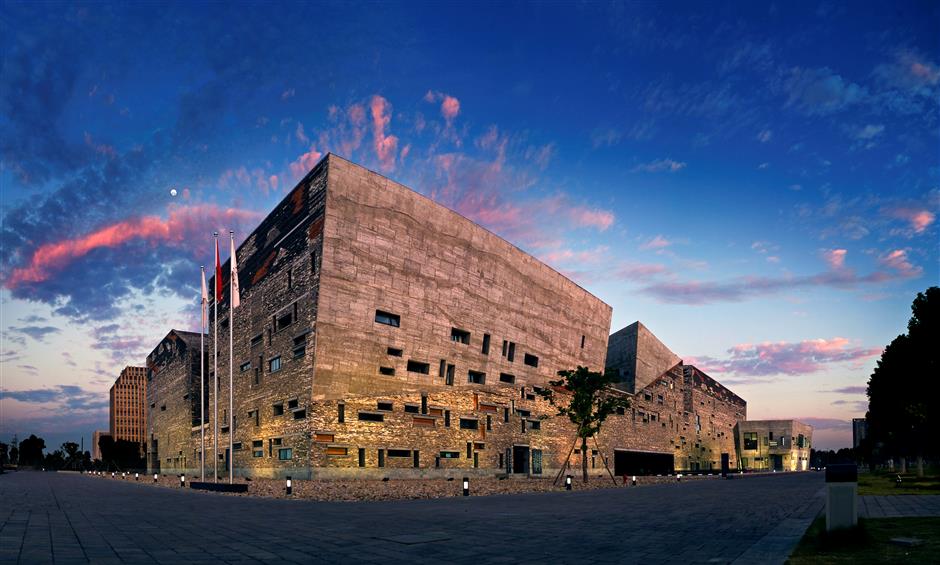 Built with recycled materials from traditional Chinese buildings, the three-story structure exemplifies the concepts of mountains and water.

Museums are sometimes distinguished as much by their buildings as by their collections. Look no further than the coastal city of Ningbo, about 240 kilometers south of Shanghai.

The Ningbo Museum, which opened in 2008, was designed by Wang Shu, the first Chinese citizen to win the coveted Pritzker Architecture Prize, known as the Nobel Prize of the architectural world, in 2012. The museum also won the 2009 Lu Ban Prize, the top architecture award in China.

Built with recycled materials from traditional Chinese buildings, the three-story structure exemplifies the concepts of mountains and water.

“The museum’s most valuable collection, to some extent, is the building,” said museum director Wang Lijun. “It’s a perfect fusion of Ningbo’s history, natural environment, customs and culture.”

In awarding the Pritzker Prize to Wang Shu, the jury citation reads: “The Ningbo Museum is one of those unique buildings that, while striking in photos, is even more moving when experienced. The museum is an urban icon, a well-tuned repository for history and a setting where the visitor comes first. The richness of the spatial experience, both in the exterior and interior, is remarkable. This building embodies strength, pragmatism and emotion all in one.”

The striking exterior of the building is an asymmetrical construction built with more than 6 million old bricks and tiles, the leftovers of dismantled houses, bridges and ancient walls sacrificed to urban development over the decades. Some of the bricks date back more than 2,000 years ago.

“Six million is just a rough estimate because each brick is varied in size, shape and thickness,” director Wang said. “I guess there might be more than that.” 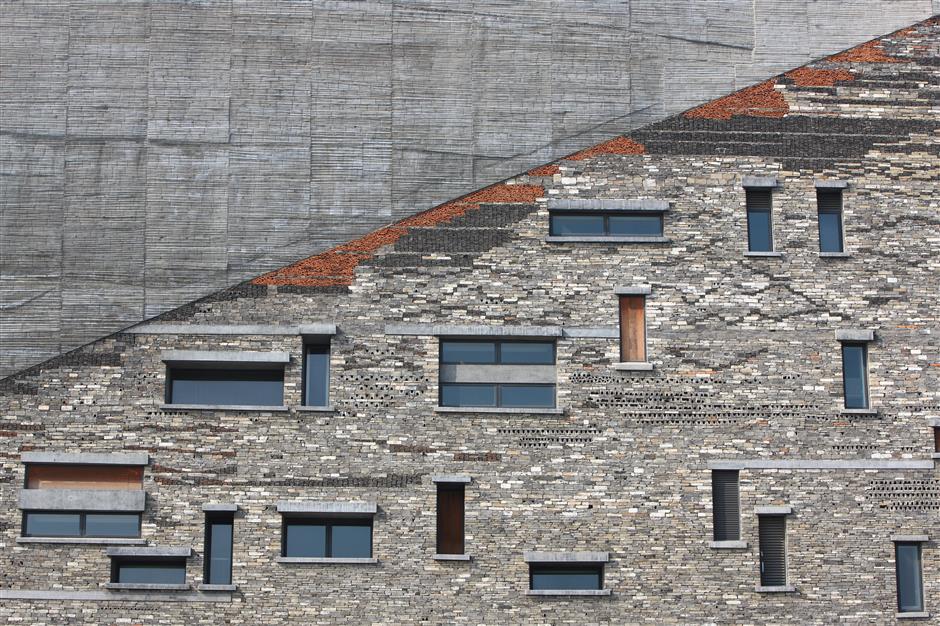 The exterior facade of the museum comprises of millions of old bricks and tiles, all leftovers of the city’s urbanization.

The irregular, lopsided architecture looks like a boat, a wall, a mountain or a house from different angles, symbolizing Ningbo’s diversified cultures that embrace the sea and the mountains, the East and the West.

The city was the cradle of the Hemudu civilization (5500-3300 BC), a key link in the ancient maritime Silk Road. A maritime center for centuries, Ningbo’s deep-water port developed into a commercial engine for the Yangtze River Delta’s regional economy and a vital trading center for east China.

The design of the main entrance — a long stone pavement — was inspired by the Tuoshan Weir in the southwest of Ningbo, one of the greatest ancient irrigation systems in China.

Water dominates the main entrance. It’s designed like a hebutou, or “river port,” in a typical Ningbo architectural style where locals living riverside wash food and clothes. Half-immersed in a man-made lake lined with reeds, the museum beckons visitors to enter.

The low ceiling of the entrance creates the atmosphere of a narrow canyon, with the museum interior space suddenly popping up wide and big, like entering a huge cave.

The inside facade is deeply rooted in Ningbo’s folk culture. Plain cement creates imprints of coarse bamboo planks, harking back to days of yore when bamboo was a staple industry of the city.

“A museum displays history, but it also collects time,” said director Wang. “It’s a bridge that links the past and leads to the future.”

In the years since it opened, Ningbo Museum has received more than 10 million visitors. It’s a top destination spot in the city, with its more than 60,000 pieces of bronze, porcelain, carved bamboo, jade, gold and silver antiquities, along with Chinese calligraphy, paintings and folk items.

Ningbo was the birthplace of the Hemudu civilization during the Neolithic Age. The museum displays a large number of pieces that were excavated from areas around Ningbo, including pottery wheels, cooking vessels and stone weapons.

One eagle-shaped pottery bowl, discovered in the outlying town of Cicheng in 2004, highlights the history of the Spring and Autumn Period (770-476 BC), when Neolithic people worshiped birds.

“At that time, the area was crisscrossed with rivers that caused great inconvenience to farm life,” director Wang said. “People back then wished that they could fly away from the water and have broader land to till.”

The exhibition hall of folk culture provides some insights into the daily lives of ancient Ningbo locals, especially their wedding customs. 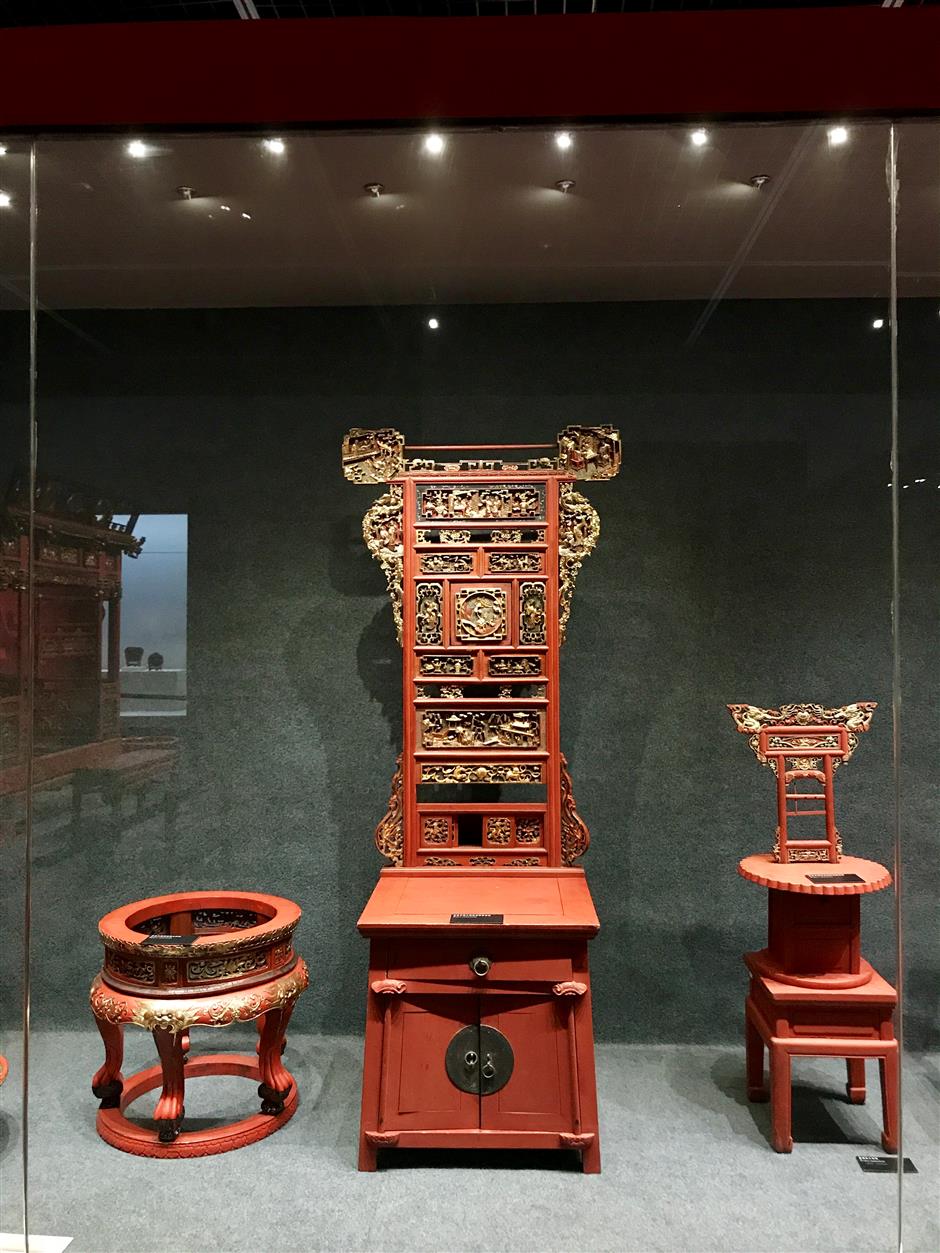 A set of extravagantly carved traditional furniture painted in red and gold for a pair of Ningbo newlyweds.

Qian gong chuang, a wedding bed that took 1,000 man-hours to complete, was one of the most important pieces of furniture for newlyweds. The bed on display in the museum includes a dressing table, a toilet, a dessert box and a stationery case, all beautifully carved and painted in red and gold.

Along with the bed, the wan gong jiao, a wedding palanquin that took 10,000 work days to make, was another dowry essential. The museum’s palanquin is 3 meters high and weighs 200 kilograms. It needed eight bearers to carry.

The palanquin’s top is comprised of five decorated archways, a symbol of five high mountains reaching to the heavens.

In the middle layer is a fierce-looking statue of Kuixing, the deity of wisdom, holding a painting brush in one hand. Golden dragons and phoenix are carved in almost every corner, and more than 300 characters in Chinese mythologies cover the palanquin.

Porcelain from the ancient Yue kiln in Zhejiang Province is also featured in the museum. The kiln was famous for its glazing techniques and the ability to produce many pieces in the “secret color” (fine olive-green), used as a tribute to the imperial court.

One of the most valuable is a lotus-shaped teacup on a saucer shaped like a slightly furled lotus leaf. The fine glazing gives the celadon set a lustrous shine.

Wang Shu, 55, is now dean of the School of Architecture at the China Academy of Art in Hangzhou, capital of Zhejiang Province.

He earned a PhD in architecture at Shanghai’s Tongji University in 2000. With his architect wife Lu Wenyu, he founded the firm Amateur Architecture Studio. 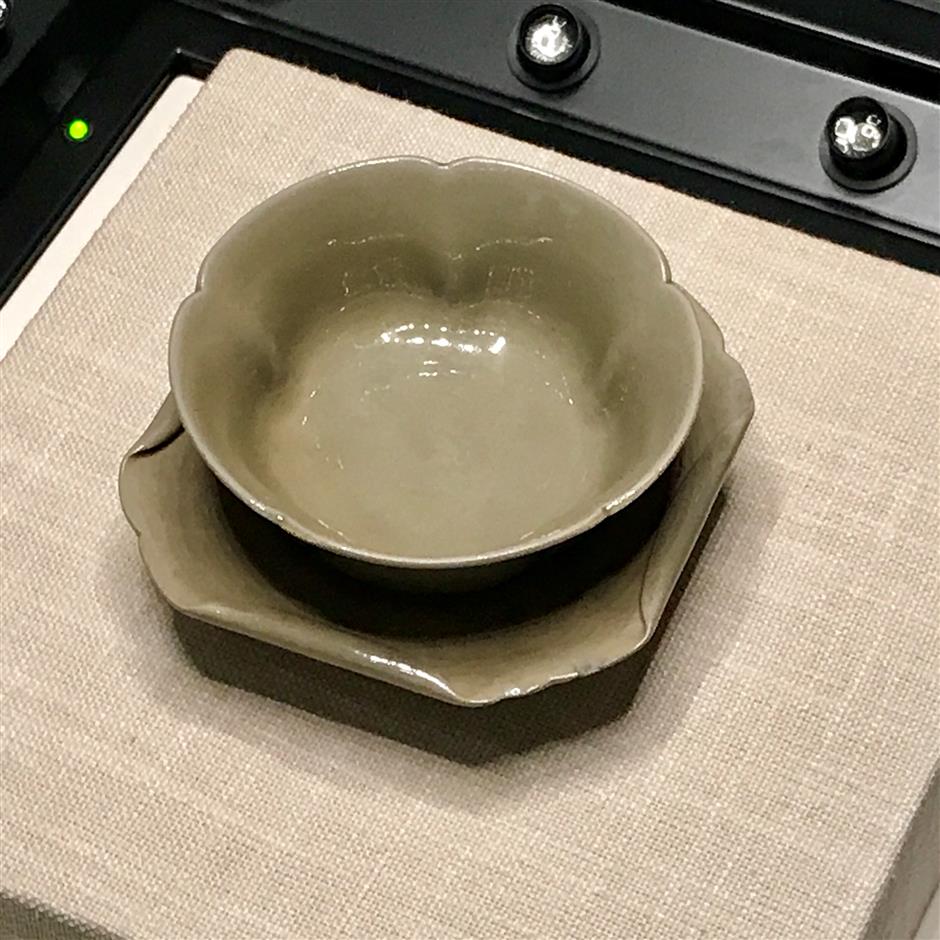 One of the most valuable Yue wares is a lotus-shaped teacup on a saucer shaped like a slightly furled lotus leaf.