Atop stone pillar, Buddhist temples reach for the sky

Mount Fanjing, or Fanjingshan, in the southwestern province of Guizhou gives new meaning to the words “extraordinary landform.”

The mountain, the highest peak in the Wuling range in Guizhou, is highlighted by an isolated, stone tower jutting into the sky and bisected by a deep ravine. Atop this other-worldly pinnacle are Buddhist temples.

The mountain is home to various ethnic groups, such as the Dong, Miao and Tujia, and to a rich diversity of plant and animal species.

UNESCO listed the mountain as a World Heritage Site last year. The UNESCO website says: “It is an island of metamorphic rock in a sea of karst, home to many plant and animal species that originated between 65 million and 2 million years ago. Its isolation has led to a high degree of biodiversity with endemic species, such as the Fanjingshan fir, the Guizhou snub-nosed monkey and endangered species such as the Chinese giant salamander, the forest musk deer and Reeve’s pheasant.

“Fanjingshan has the largest and most contiguous primeval beech forest in the subtropical region.”

Small wonder that this area attracts such a large number of visitors. Follow Shanghai Daily to see what you could experience on a trip there.

As the earliest mountains rising from the sea in southern China, the landform of Mount Fanjing is called a “fold belt” in geology, which means that the massif resembles huge lasagnas — layers and layers of rocks piled into bizarre shapes rarely seen anywhere else.

The Mushroom Rock is a good example. Layers of rocks form the shape of a tall mushroom. The top of the “mushroom” seems to be on the verge of collapse, but it has been standing there for millions of years.

When sun shines on the rock, it creates a surrealistic view that looks like a Salvador Dali painting come to life. 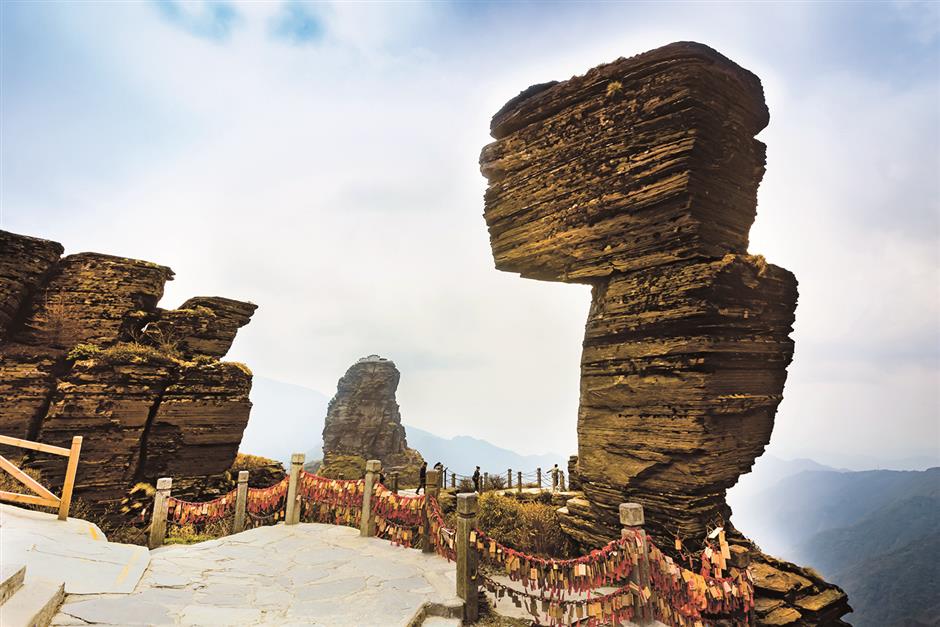 The Mushroom Rock is an icon of the “fold belt” landform of Mount Fanjing.

If the “mushroom” is an appetizer, the Hongyun Golden Summit is no doubt the main dish.

As the highest point of Mount Fanjing, the 2,336-meter-high stone tower looks as if it is growing out of the ground. At the top, the tower splits into two peaks, and the crack between them is called Golden Cleaver, a quite appropriate name.

Along the cliffs are ancient inscriptions from the Ming (1368-1644) and Qing (1644-1911) dynasties, expressing veneration to the holy mountain of the local people.

On each of the two peaks stands an ancient Buddhist temple, one worshiping Sakyamuni, the founder of Buddhism; and the other Maitreya, the Buddha of the Future. A bridge connects the two peaks so that pilgrims don’t have to climb the summit twice to visit the two temples.

Built during the Ming Dynasty, the temples remain a wonder of ancient ingenuity. Without the benefit of modern techniques, ancient people had to carry all the materials up the almost vertical mountain. 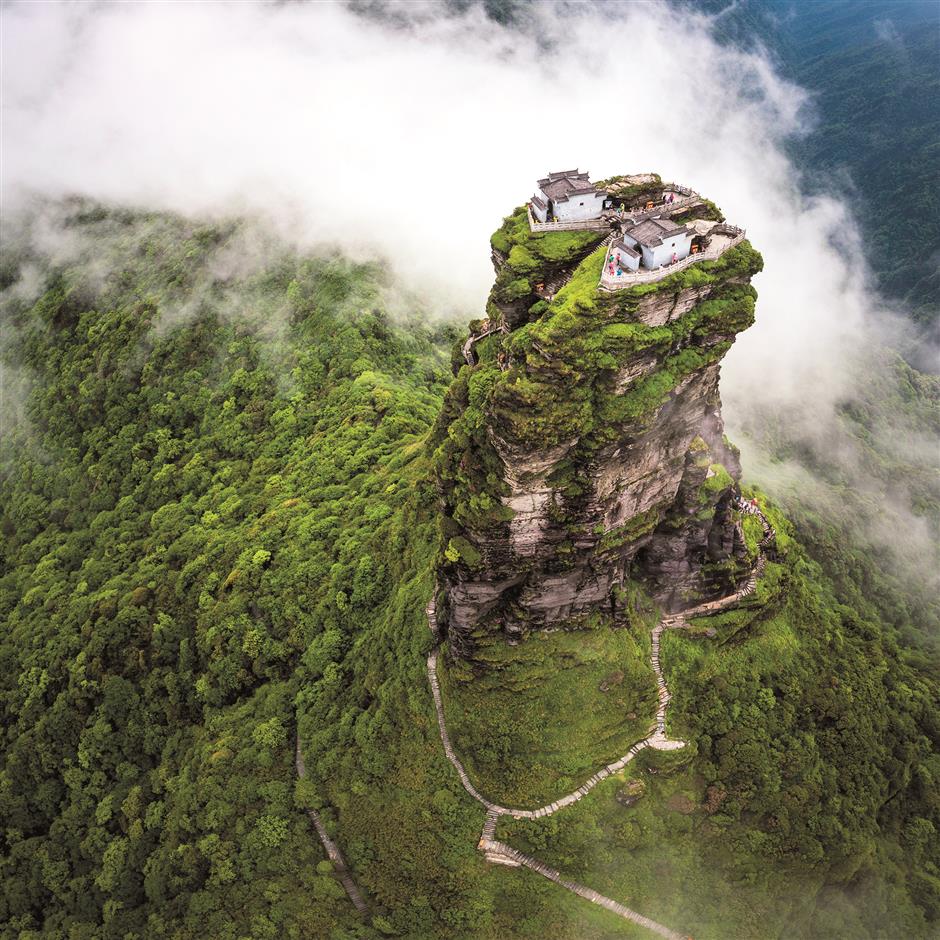 Temples sit on the stone column of Mount Fanjing, divided by the Golden Cleaver ravine.

Mount Fanjing’s history with Buddhism goes back even further. Buddhism was first introduced into the area about 1,000 years ago, despite the fact that the local natives had their own religions that considered the mountain at the core of their faith.

During the Ming Dynasty, when the central government was mining for gold and cinnabar in the area, word of this unique landscape attracted many people, including Buddhists. They regarded it a “heavenly place” and built temples to practice their faith.

Since then, Buddhism has flourished in the area, making it one of the five Buddhist holy lands in China.

Pilgrims show great perseverance and reverence, climbing all the way up to the top of the golden summit on stone staircases along the cliff.

“If you’re afraid of heights, this is definitely not the place for you,” commented visitor Chris Jiang on the online travel website Ctrip.com. “When you are on the staircases and look back, it feels like you are walking in the sky. Some parts of the cliff are so steep that you need to be very careful. Don’t ever let go of the rails.”

Fortunately for those who suffer from acrophobia, there are other grand temples in the area. The Cheng’en Temple, for example, is also a must-see on the mountain. An imperial temple during the Ming Dynasty, it was restored in 1988 after the original buildings were destroyed in wars.

In Guizhou Province, where various ethnic minority groups have been living for thousands of years, many of the ancient mountain villages have not been much disturbed by the modern lifestyle and tourist commercialism.

Now, with the advent of tourist promotion, some of the villages have been exposed to the “outside world,” but they still manage to retain some, or at least most of their original culture, including buildings, traditions and lifestyles. Local people are happy to share their food, music, dancing and arts with visitors.

Fengshendong Village is a fine example.

First founded in the Qing Dynasty, the village is now home to about 60 families, nearly all of them surnamed Shu.

Wood houses with black roof tiles are scattered on a mountain slope. It’s like a countryside painting writ large — the quaint cottages, the green mountains, the vast fields, the ancient trees, the corn hanging under roof eaves and the chili peppers drying in the sun. 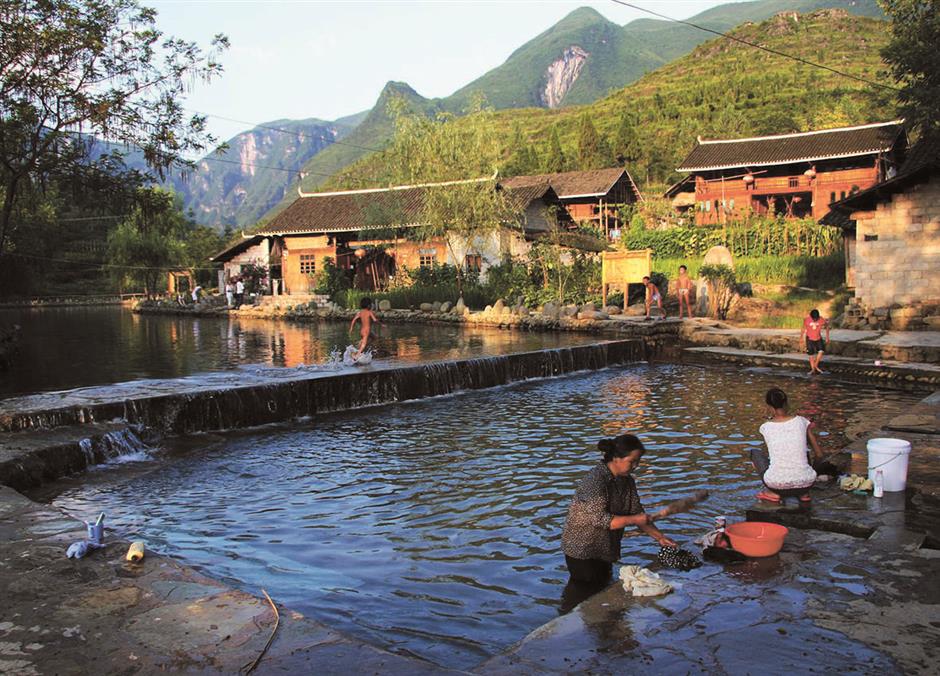 Like many other places in Guizhou, people in Fengshendong are crazy about fish in sour soup. Every family has its own recipe for the soup, either made from wild tomatoes or fermented rice water.

The village grows a lot of persimmon trees, and every year in late fall and early winter, visitors can join the locals in picking persimmons, which are said to be among the best in China.

Huangyan Village is another place worthy of a visit. Located deeper in the mountains, the road into the village is quite pot-holed. The Tujia village, where most residents are surnamed Meng, is full of ancient houses, wells and trees that have been around for about 400 years.

Everything here feels “retro,” even the way the villagers hang row after row of tobacco leaves on ropes, giving the area a curious decor.

The chicken soup served in eateries in farm homes is highly recommended. It’s made from free-range chicken, which gives it a fresh, rich taste. The mushrooms in the soup top off the delectable dish.

Zhaisha Dong Village at the foot of Mount Fanjing is more developed because of the large numbers of tourists who go there. It is only 3 kilometers from the entrance to the Mount Fanjing scenic area and provides visitor accommodation. 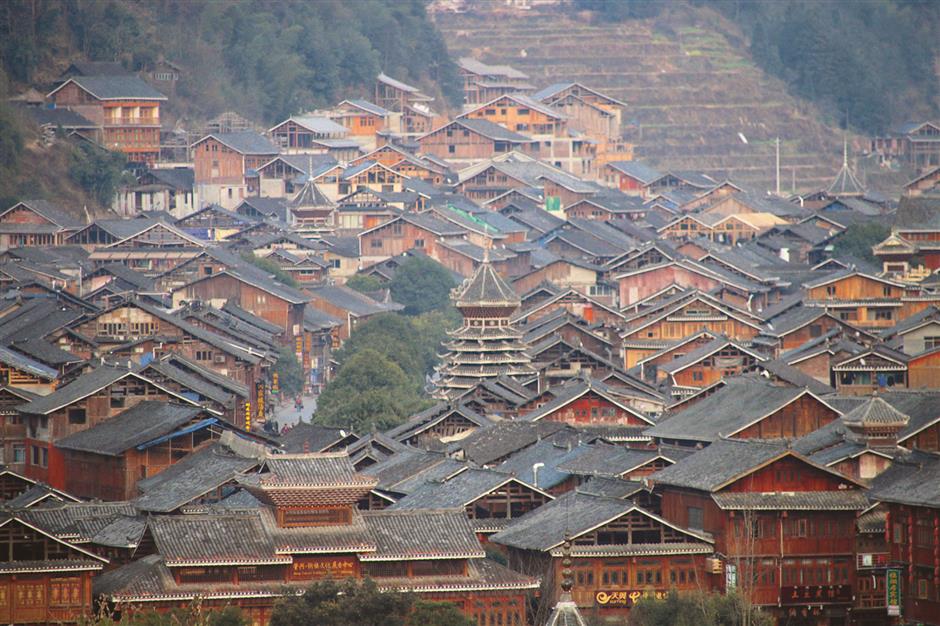 Built across the Taiping River, a long bridge is an icon of the village. Brave visitors can walk the 127-meter-long plank bridge, though be forewarned that it swings in the wind.

Just like many other ancient towns near scenic areas, activities such as bonfire parties, song and dance shows as well as local culinary feasts are available in the village. There are also bed and breakfast franchises and some souvenir shops on the main street.

Though there is nothing particularly new or special about the village, it’s a welcome sight after a trek up and down the steep mountains and a nice place for a bit of refreshment and a good night’s sleep.

There are direct flights between Shanghai and Tongren, the nearest city to Mount Fanjing in Guizhou. From the airport, transfer to local buses going to the scenic area.

Those who want to visit ancient villages, such as Fengshendong and Huangyan, need to book car services in Tongren beforehand because public transport reaching into the deep areas of the mountains is scarce.

Every day, the scenic area accepts a maximum of 8,000 people. With the summer holidays approaching, visitors are advised to book tickets online at www.fjsfjq.com, the official website of the area. The admission fee to the mountain, including cable car services, is 280 yuan (US$40).

﻿
Special Reports
﻿
61820
,
Three villas: a tale of wartime skullduggery
Writers and artists of the past lend old lane a rich history
First bloom signals late start to osmanthus season
Time well spent: The revitalization of a Bund icon
Our prehistoric predecessors: They fascinate us, they scare us
'Red' tourism and culture travel activities abound in Jinhua Week
Near neighbors: The rich history and close residents of Ci'anli Building
Ningbo is becoming a new summer hotspot for tourism
Hangzhou's most popular 'red' tourism sites
Timber temple evokes debate over origins of its architectural style
EXPLORE SHINE