Line 5, on right track for journey of discovery, adventure, change

Metro Line 5 is a suburban line, running from Minhang District to Fengxian District along the Hangzhou Bay in southwestern Shanghai. It passes through some of the city’s oldest industrial zones as well as newly developed towns. Urban sprawl is a timeline of the city’s progress. Line 5 is also a reminder that you don’t have to be downtown to find interesting places to visit.

The one and only purpose of creating Guteng Garden in Minhang District was to protect a wisteria that is nearly 480 years old.

Nearly five centuries later, the woody, flowering plant has grown into a 3.5-meter-high tree, with vines sprawling out over an area almost as large as a basketball court.

A stone and wood frame has been built to support all the branches and vines. 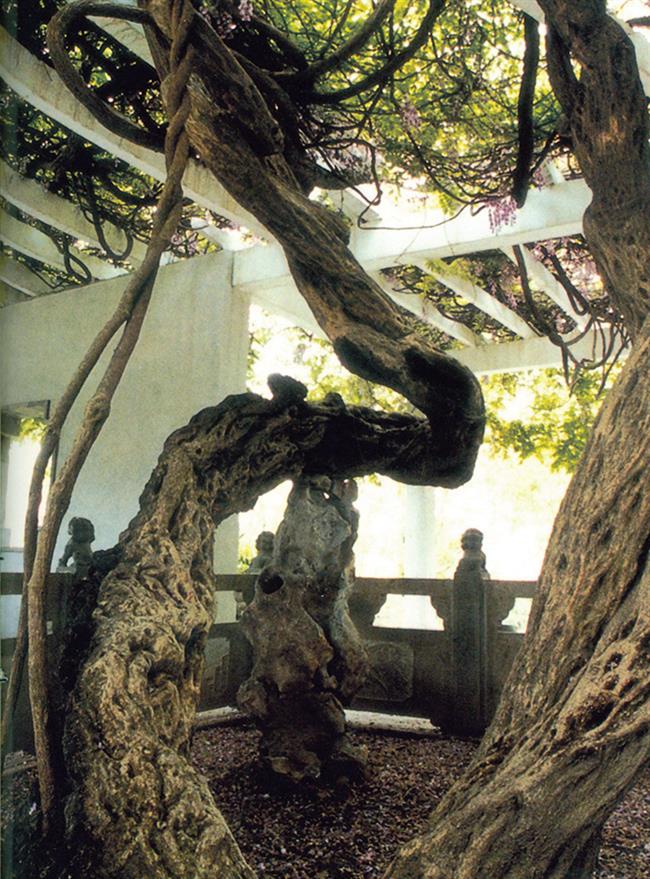 The wisteria in Guteng Garden

Every spring, flowers cover the entire frame, forming a puff of purple cloud to those walking beneath it.

In summer, the garden is one of the most popular attractions in the entire district.

Apart from the wisteria, the garden features stone steles, memorial gates and stone sculptures from the Ming and Qing dynasties, creating a small outdoor museum that traces the history of Minhang District.

Wenjing Road Station is deep inside in an industrial zone, so it’s almost impossible to find a decent restaurant nearby. The best bet is to take the Metro line two stops farther to the Jinping Road Station to find good food.

Near the station, the Beijidao Barbeque Buffet is highly recommended by local people. The cafeteria serves barbeque, hotpot and a variety of other food and drink options, including cocktails. After a walk in the park, it’s a nice place to rest and refuel.

Built during the Yuan Dynasty (1271-1368), the Eryan Temple has endured the vicissitudes of 800-plus years. Its oldest pavilion was destroyed during the “cultural revolution” (1966-76), and urban development caused what was left of the temple to be moved entirely to its current location in 1993. 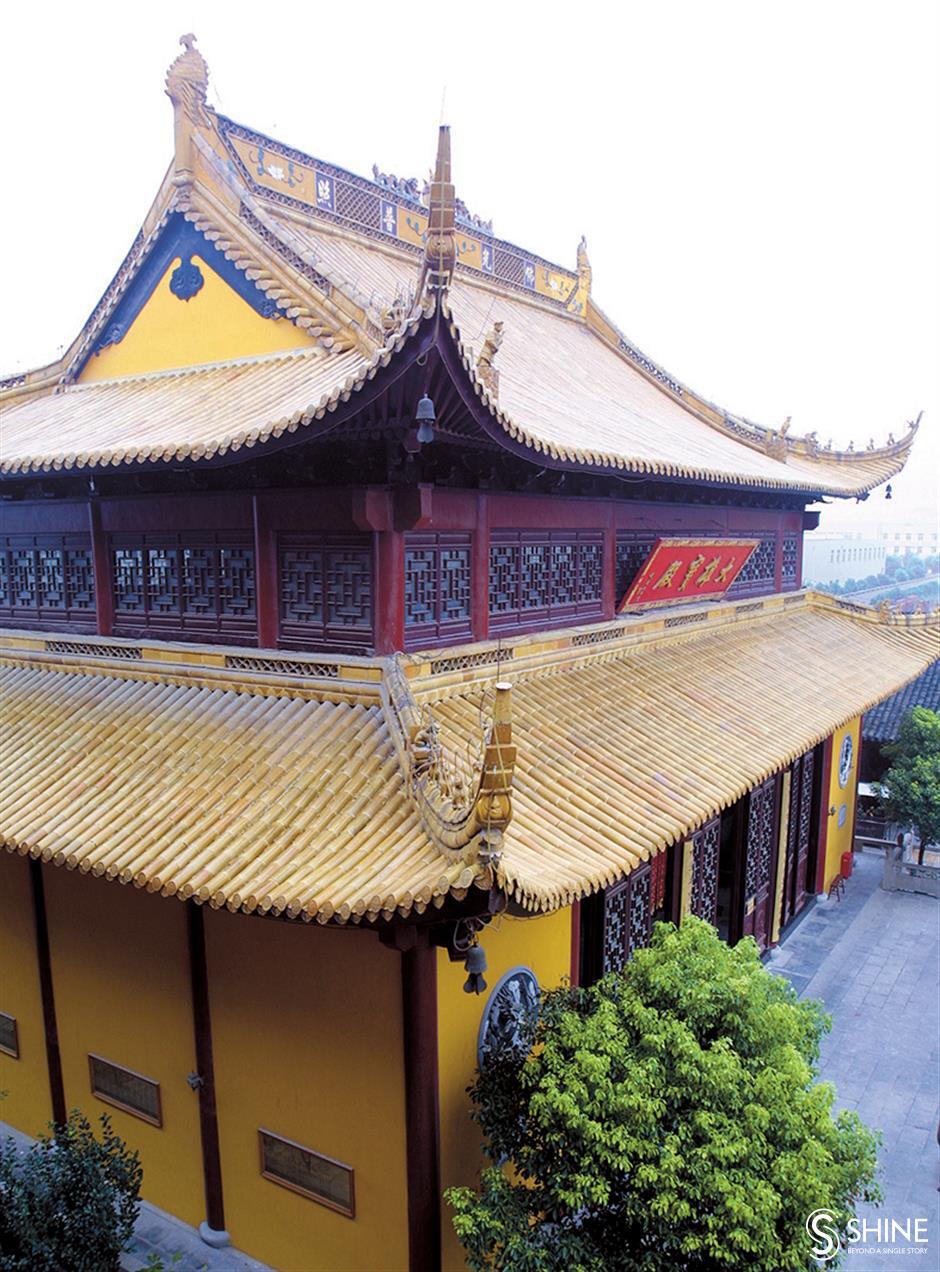 The main hall of Eryan Temple in Fengxian District

It is, however, still the grandest Buddhist temple in Fengxian District. Every year, more than 100,000 people visit the site to pray and to admire two nearly1,000-year-old ginkgo trees in the yard.

The trees, which resemble two people standing side by side, are the biggest treasures of the temple. A fence surrounds them, providing a place for people to tie on red strips making wishes, mostly about love and marriage.

The best season to visit the temple is in late autumn, when the ginkgo leaves turn gold and fall like rain in a breeze, coating the ground with a shimmering blanket. With Buddhist chants in the background, the scene has a sacred, surreal feel to it.

Meals of vegetables, meat and fish directly from local farms attract people from all over Shanghai. The most recommended dish is tofu skin, a chewy bean dish seasoned with homemade sauces. Very tasty, with a freshness that complements the summer season.

This garden, built by residents of nearby Madu Village to protect the water source of the Huangpu River, is actually a 10-minute drive from the Metro station.

Although it’s called a “water garden,” the site is actually a museum of ancient bridges. Some 25 bridges from Shanghai, Jiangsu and Zhejiang were relocated here, along with 600 trees that are 100 or more years old. 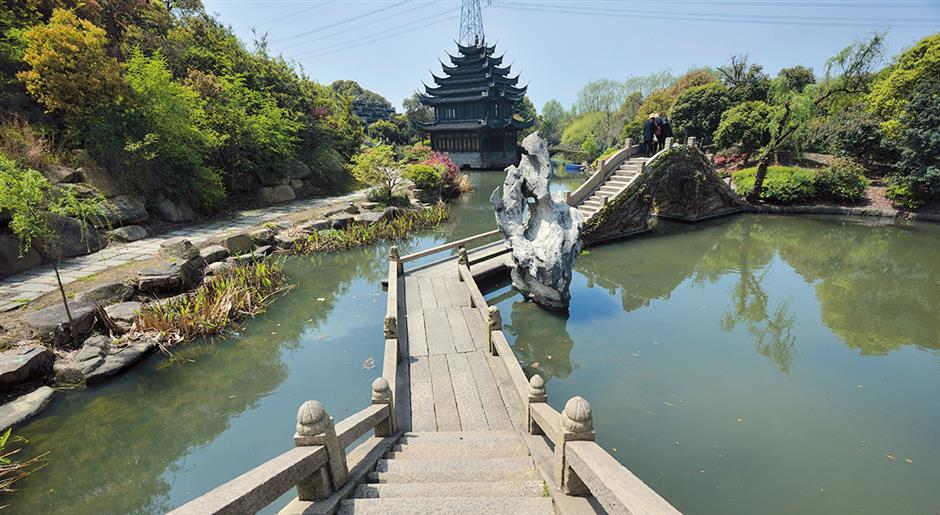 Because the garden is about 25 kilometers away from downtown Shanghai, it is quiet most of the time, with few visitors. Sometimes you can walk for an hour in the garden and meet no one. It does take time to navigate all the corridors, terraces, pavilions and ancient bridges, and in summer the trip is shaded by stately old trees.

In Minhang, people love to eat mutton – often with Chinese liquor – so why not do as the locals do?

The Maqiao Mutton House near the Hanxiang Water Garden is a popular eatery among locals.

Mashed mutton is the most ordered dish in the restaurant. Although it is called “mashed,” the dish is neither mushy nor overcooked — just tender and soft. There is no mutton odor, and the meat is complemented by savory dipping sauces.

Pork rind soup is also a popular menu item. Boiled with knuckles, the soup is milky with rich flavor.

Jinhai Lake, popularly called the “Shanghai Fish” because its shape on a map resembles a giant koi carp jumping out of water, is the largest artificial lake in the city.

It was designed by Larry Ziebarth, who is perhaps best known as the master planner of The Palm artificial islands in Dubai.

A park around the lake with greenery and vast seas of flowers is under construction. When completed, it’s expected to become a new landmark and a popular weekend excursion destination. 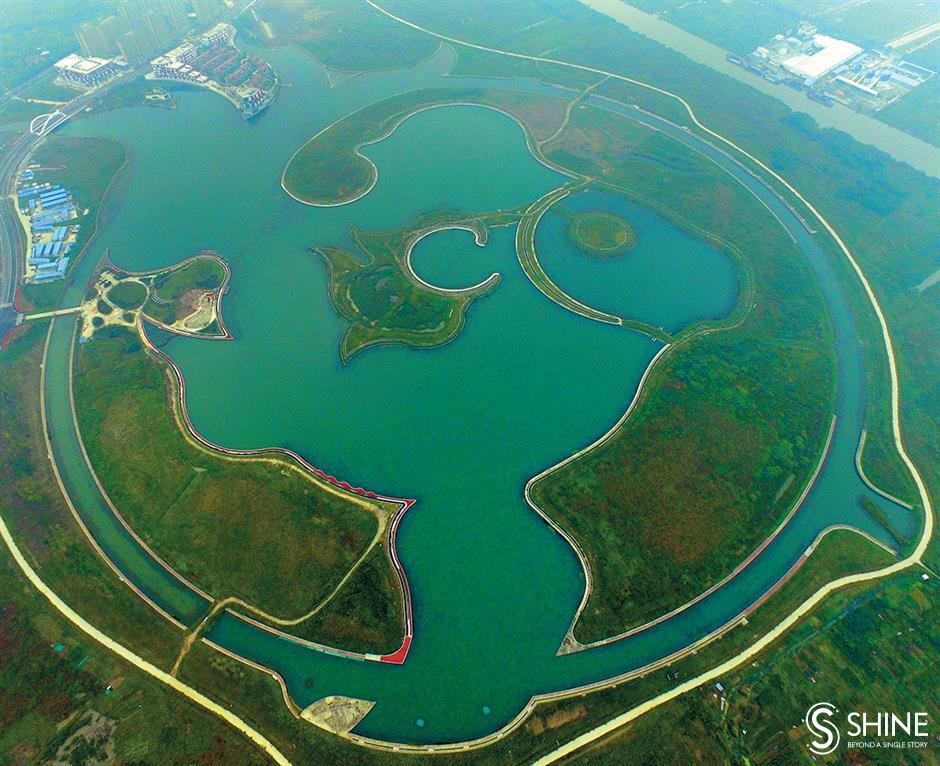 The Fengxian Museum, located near the “head” of the koi, just opened to the public last month.

The first exhibition focuses on the reign of Yongzheng Emperor (1678-1735) during the Qing Dynasty (1644-1911). Exhibits from the Palace Museum in Beijing are displayed to show the politics, economy and culture during one of the last glorious eras of Chinese dynasties.

It’s a fitting debut. Fengxian is related to Yongzheng’s reign by virtue of a seawall the emperor ordered to be built there. Its remnants can still be seen today in Fengxian.

Relics on display in the exhibition include imperial seals, the emperor’s dragon robe, artifacts used in the Forbidden City, and painting and calligraphy favored by the royal family. 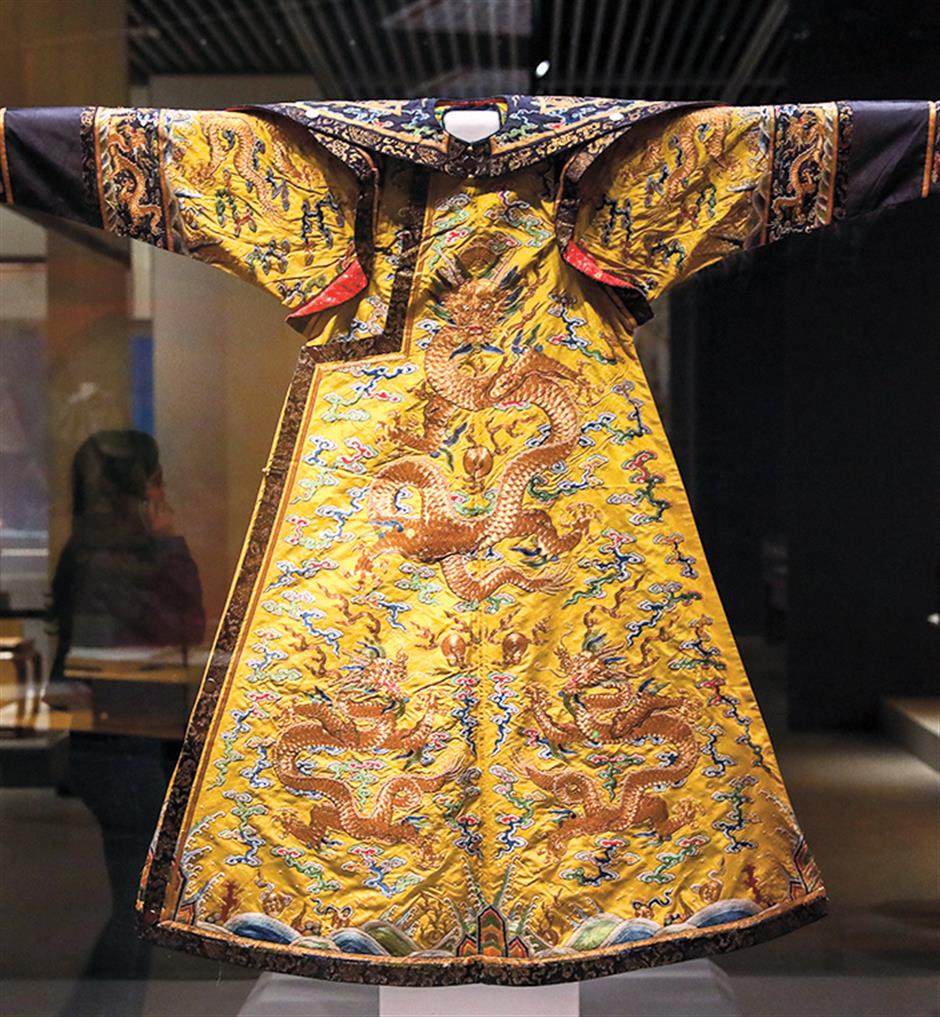 The dragon robe of Emperor Yongzheng

The exhibition will run through August. Visitors need to make appointments in advance on the museum’s official website: www.fxbwg.cn.

For many visitors, the museum building itself is probably the main reason for enduring a 90-mimute Metro ride from downtown to the new town of Fengxian.

Designed by award-winning Japanese architect Sou Fujimoto, the building looks like three ovals linked in the middle. From above, it resembles a cloverleaf on the lake.

When the park is completed, the whole area is expected to be a comprehensive entertainment and business zone that includes water activities, shopping malls, camping sites and yacht clubs.

Qiyun Mansion is believed to be the best Shanghai cuisine restaurant in Fengxian District.

Traditional Shanghai dishes, such as braised pork in soy sauce and smoked fish, are the most popular on the menu. More creative dishes, such as foie gras rolls, have received mixed comments. The most popular dish is the Southeast Asian-style curried shrimp. Some patrons say that it is so delicious they want to lick the bowls clean.