A bird sanctuary of 'global importance' to wildlife protection

Jiangsu Province next door to Shanghai is a winter sanctuary for red-crowned cranes. There, they share the Yancheng Wetland National Reserve of Rare Birds with swans, egrets, white storks and hundreds of species of other birds, fishes and plants.

The reserve, along with four other wetlands in the province, was inscribed on the UNESCO World Heritage list this month.

Cranes are part of Chinese culture. In mythology, they symbolize immortality and nobility, and are a frequent motif in artworks. Depictions of cranes have been found in ancient Shang Dynasty (c.16th century-11th century BC) tombs and Zhou Dynasty (c.11th century-221 BC) ceremonial bronzeware.

Adult red-crowned cranes are named for a patch of red bare skin on their crowns, which becomes brighter during mating season. The species is among the largest cranes in the world.

In spring and summer, the migratory populations of the red-crowned crane breed in Siberia and northeastern China before heading south for warmer climes at the end of September. The birds embraced the special nature of the Yancheng wetlands long before the UN chose to officially acknowledge the area. The wetlands cover more than 2,400 square kilometers, about one-third the area of Shanghai. 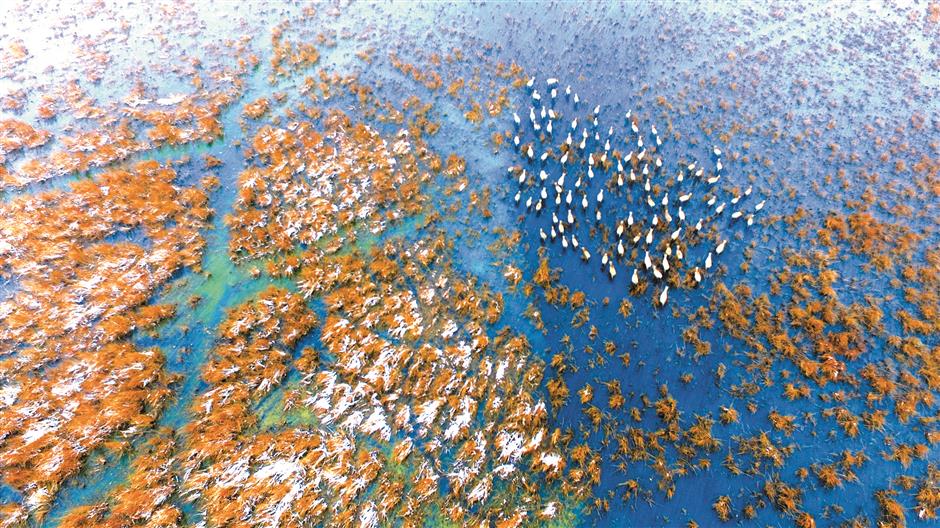 The reserve was added to the UNESCO World Heritage list this month.

A small portion of the reserve, where some red-crowned cranes are raised for scientific research, is open to the public. And beside the wetland, hides are set up for bird watching.

At the crane-raising site beside a pond, the birds stay in glass houses most of the time because they are molting and reluctant to fly.

“You can see some brownish feathers on their backs now,” says Pan Chenglong, a carer with the reserve. “And when the molting season is over, the feathers will turn completely snow white.”

There is another pond behind the glass house where the cranes can enjoy an environment as close to nature as possible. According to Pan, who has been working at the reserve for five years, the cranes enjoy eating both fresh fish and pellet feed.

When the molting season is over and weather permitting, the cranes are freed to stretch their wings from time to time. Once shooed from the glass houses, they spread their wings immediately and soar to the sky, hovering in circles for a while before returning.

The carers communicate with them by a special, quivering “boo” call. On hearing the sound, the cranes gather around the carers, following them back to the glass houses.

“The job is both interesting and difficult, especially after fledglings are born in the spring,” says Pan. “For half a year, my colleagues and I take turns caring for the fledglings 24 hours a day. We eat with them, sleep with them and closely watch their conditions.” Pan says he studied computer science in college but chose a job irrelevant to his major because he wanted to do something for his hometown. He says he was recruited mainly because of his personality, responsibility and patience, which is crucial for the job.

“The story of Xu Xiujuan is known to everyone in Yancheng,” Pan says. “I have heard her story since I was very young. She was my childhood hero, and I’m glad that I do the same job as she did.”

Xu Xiujuan was one of the best bird caretakers the reserve ever had. She was born into a crane-raising family in Heilongjiang Province in 1964 and started to work at the reserve in Yancheng in 1986.

In September 1987, a pair of swans broke free and flew away while Xu was bathing them. Though very ill at the time, she went looking for them. When she heard fluting swan calls from the opposite of a river, she waded through the water toward them. The two birds were soon found, but Xu went missing. Her body was later retrieved from the river.

Near her grave in the reserve, a memorial hall has been built to tell her heroic story to visitors.

Apart from the crane-raising site, visitors can view the open area of the reserve and watch birdlife by taking four-seat bicycles.

The area is quiet and infused with fresh sea air. High reeds, lush trees and still waters compose a picturesque scenery, while birds occasionally flapping through the leaves or dipping into water give the picture a sense of vitality.

Visitors could go to hides to observe the birds. The hides are sheds, pitch dark with two rows of peep holes on one side. The holes are big enough for the lenses of photographers.

“There are usually not many people in the wetlands, and even fewer venture into the deep reeds,” says visitor Su Jiangjun. “When you do, it feels like you are the only one left in the world, with only Mother Nature by your side. It broadens and relaxes your mind.” 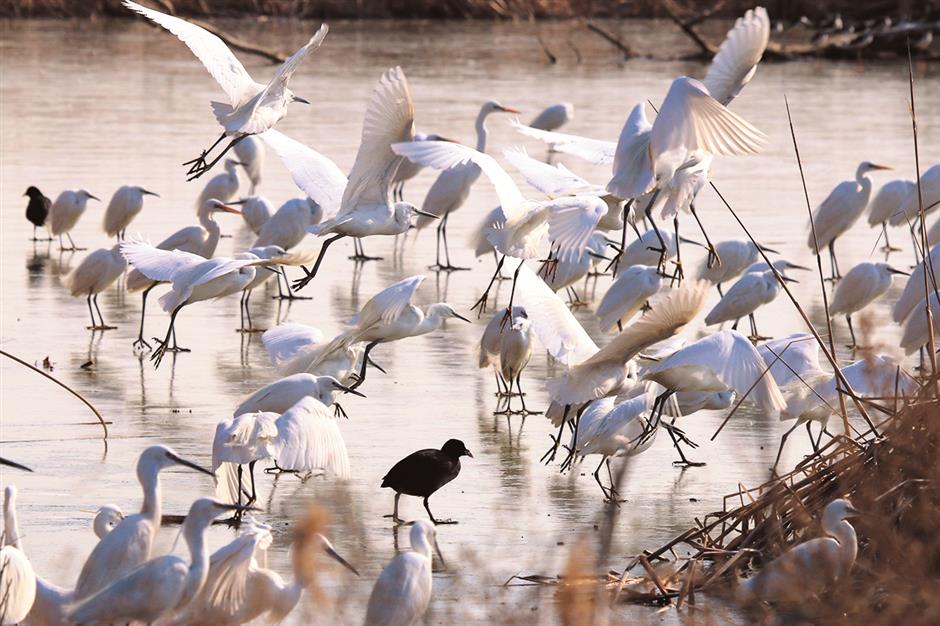 Migratory birds gather at the reserve for the winter.

The Coast of the Yellow SeaBohai Gulf of China (Phase I)

The UNESCO World Heritage site includes five wetlands in China, all in Yancheng and Dongtai in Jiangsu Province.

Many endangered species of birds inhabit the area, including 90 percent of the endangered spoonbilled sandpipers in the world. Many other species, such as black-faced spoonbills, great knots and spotted greenshanks stop over there on migration routes.

The Dafeng Elk National Nature Reserve, part of the heritage site, is home to more than 5,000 elk and other beasts, the largest group of its kind in the world. Dafeng introduced 42 elk from the United Kingdom in the 1980s and started the reserve.

According to UNESCO, the property features the world’s largest intertidal mudflat system, which is exceptionally productive and suited to many species of fish and crustaceans.

“The areas are of global importance for the gathering of many migratory bird species that use the East Asian-Australasian flyway,” says UNESCO on its website. “Large gatherings of birds, including some of the world’s most endangered species, depend on the coastline as a stopover to molt, rest, winter or nest.”

Phase II of the site, including another 11 wetlands in Liaoning, Hebei and Shandong provinces, is on the nomination list of World Heritage sites. 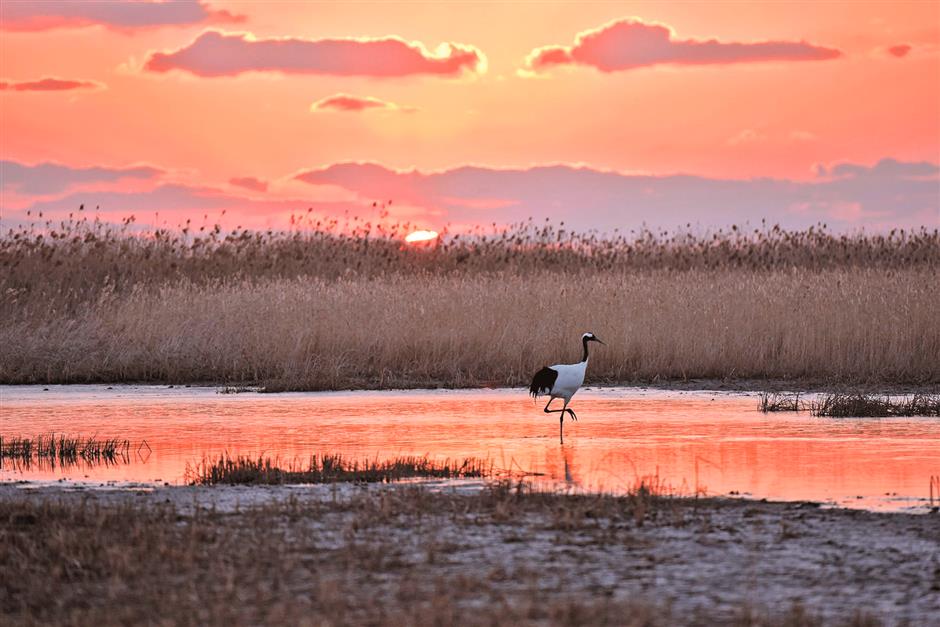 A red-crowned crane rests at the Yancheng Wetland National Reserve of Rare Birds.

Despite Yancheng’s location relatively near Shanghai, getting there is not as convenient as one might expect.

There is one direct flight a day between Shanghai and Yancheng. Alternatively, the trip by long-distance bus takes at least four-and-a-half hours. No direct trains are currently available.

From downtown Yancheng, take the K202 bus from the Long-Distance Bus Station to the Jiangsu Yancheng Wetland National Reserve of Rare Birds.

The entry fee is 45 yuan (US$9.45). A special shuttle bus from the Dafeng Bus Station goes to the Dafeng Elk National Nature Reserve. Admission there is 55 yuan.

The best season for visiting the rare bird reserve is winter, while June to August is the ideal time to visit the elk reserve. During summer, it is advisable to wear longsleeve shirts and long pants because mosquitoes are rampant in the wetlands.