Fanfare for ancient craft that is beautiful as well as utilitarian 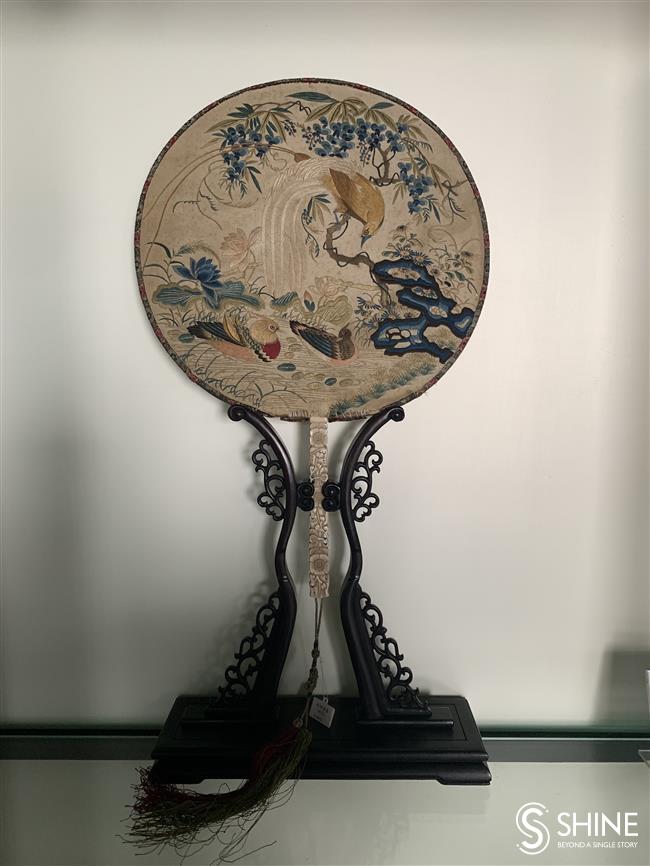 An embroidery round fan made in the Qing Dynasty

Few things combine functionality, ceremony and artwork as elegantly as a handheld fan. Used by ancient royals, scholars and aristocrats, they were both status symbols and artistic statements, as well as coolers in the heat of summer.

Suzhou is famed as a city of fan-making. Two hundred years ago, it emerged as a global center for the craft. It’s only fitting then that the Suzhou Fan Museum hosts one of China’s most illustrious collections of fans.

The museum is tucked away in a narrow lane and housed in an 800-year-old building once used as a Taoist temple.

The museum offers a clear timeline of the evolution of fans into almost 20 categories and more than a dozen styles. Materials used to make them include paper, silk, feathers, straw, wood, bamboo and gemstones.

Fans that first appeared in China about 4,000 years ago were made of bamboo. During the Shang and Zhou dynasties (16th century-256 BC), the feathers of wild geese, pheasants and cranes were used.

Fans in ancient times — large with a long stick — were usually held crossed by two attendants standing behind an emperor or empress. Instead of cooling, the fans functioned as shade and a brush to dispel dust or sand. The fans often featured silk and satin.

It was after Western Han Dynasty (206 BC-AD 25) that fans developed into functional coolers. They became lighter and more agile to use.

The full moon-shaped round fans were the first to arrive on the scene. The round shape suggested reunion and completion in Chinese culture. The fans were mostly of silk, with delicate embroidery. They were eagerly sought by young ladies of fashion.

Later, the round fan morphed into different shapes, such as oval or even the shape of a Chinese plum flower or sunflower. The handles were made of wood, bamboo, ivory and animal bones, with tassels or jade pendants.

Among the exhibits at the museum is a hawksbill turtle round fan made during the 19th century. The hawksbill was considered a noble creature. Its shell was carved and polished to make royal accessories that were believed to dispel chills and scare off evil spirits.

There’s also an oval flat fan that resembles a feathered one at first glance because its craftsman retained the natural pattern of the shell and cleverly selected a white-and-black part that resembled wild goose wings.

In the Song Dynasty (960-1279), people started to paint on silk, which gave rise to fan painting. The museum highlights many silk fans beautifully painted with birds, landscapes, ladies and flowers.

In addition, there are also round fans made of straw, cattails and banana leaves. 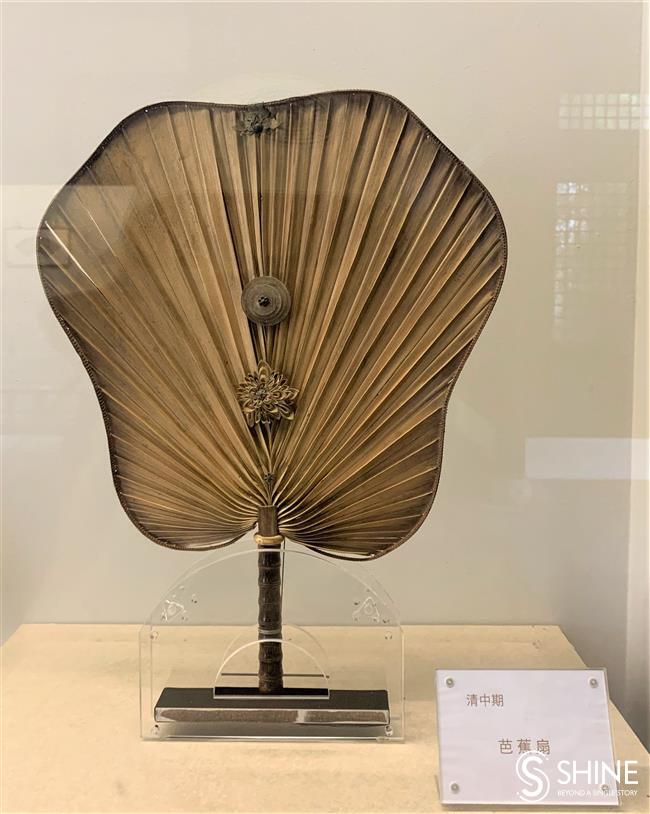 A banana-leaf fan made in the mid-Qing Dynasty

Before the Song Dynasty, fans were all rigid. Folding fans are believed to have been introduced to China from Japan during the Ming Dynasty (1368-1644). They quickly grew in popularity.

Legend has it that Japanese folding fans were inspired by the wings of a bat. Koreans also claim to have invented folding fans.

Such fans were especially appreciated by scholars and aristocrats because they combined Chinese calligraphy, painting and carving in a small space.

The skills of craftsmanship and artistry are the two most important benchmarks in judging a good folding fan, and Suzhou is a city with both.

In ancient times, a folding fan was a must-have accessory for the who’s who of China. When opened, the fan conveyed artwork to be appreciated; when folded, it tucked easily into a loose shirt sleeve.

A folding fan is comprised of a face and a rib. Rice paper is often used as the face to be painted on, while the materials for the rib can vary from hawksbill turtle, ox horn and ebony to ivory, seashells and jadeite.

Bamboo used in the fans was carefully selected from the deep forests of Jiangsu, Zhejiang and Anhui provinces. The bamboo was best cut after heavy snow. 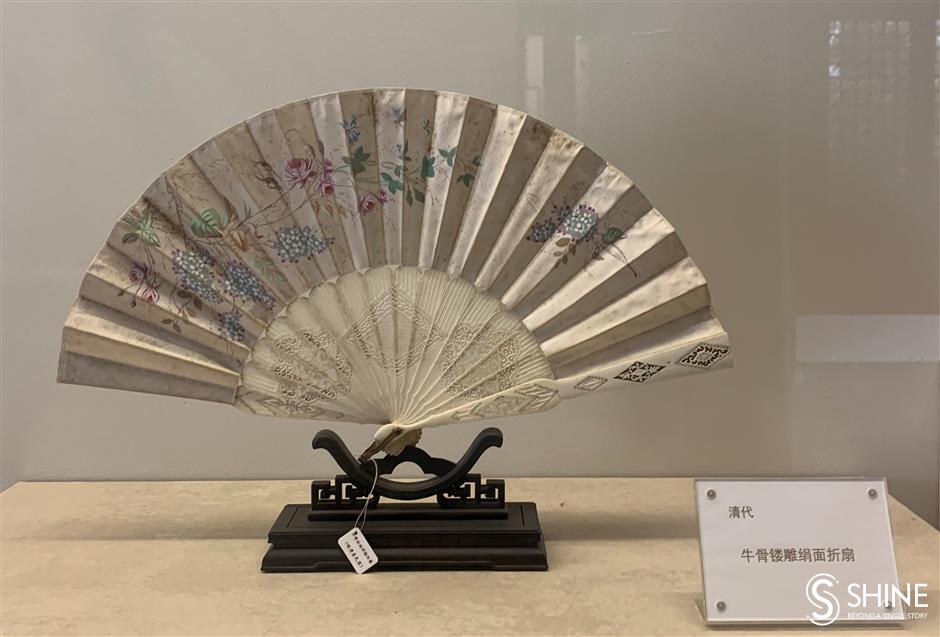 The museum has a folding fan made of Australian ostrich feathers in the 19th century. Exotic in appearance, the fan was an overseas order from Europe.

In the 1960s, another innovator, Dai Qiansheng, further improved the techniques. He once hollowed out almost 7,000 tiny holes, one by one, on a chrysanthemum-themed sandalwood fan with a wire saw. His handwork is prized even today, though machines can do the laborious job.

One of the attractions in the museum is a Buddhist-themed, double-sided sandalwood fan with a radius of 82 centimeters. It was designed by fan painter Shen Jie. One side depicts Sakyamuni preaching to humans; the other shows Guanyin Buddha liberating all living beings from the mortal world.

The museum also displays fan pendants, fan cases and bags, as well as all the ancient tools used to make fans. 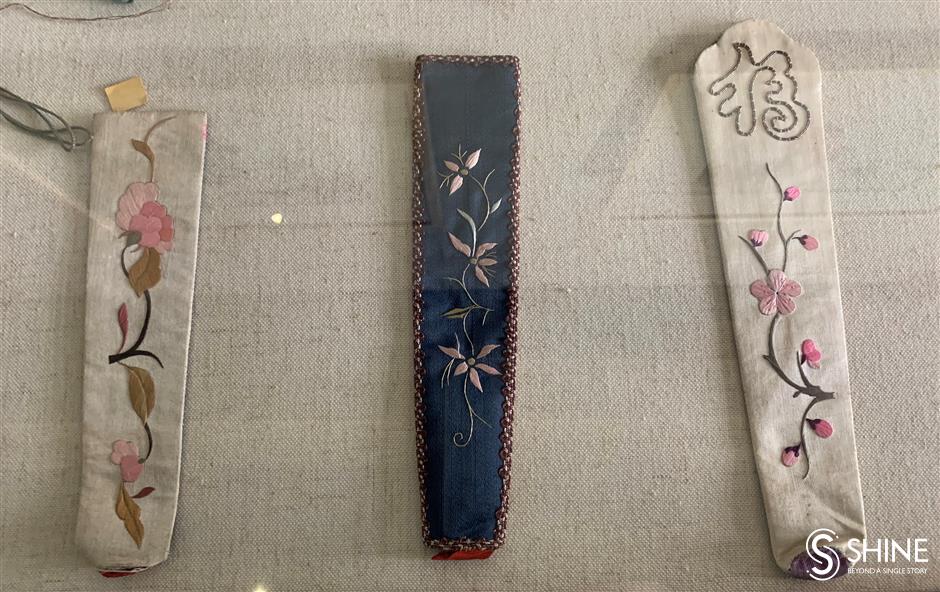