The term Huizhou, which once referred to parts of today’s Anhui and Jiangxi provinces, conjures up many things to many people: sharp but honest businessmen, grand but delicate architecture, various forms of arts, and one of China’s eight main cuisines.

The term is no longer in common use but the culture it embodies remains in the six counties of ancient Huizhou, which have developed some popular sightseeing destinations such as Wuyuan in Jiangxi.

My destination is Jixi, one of the more obscure destinations. Most people in Shanghai have probably never heard of the place, but that’s about to change with the advent of the high-speed Hangzhou-Huangshan Railway.

Jixi, with a history of about 3,000 years, flourished during Chinese dynasties. It is the starting point of the Huizhou-Hangzhou Route, an ancient trade route where people can still walk along some parts today. It is also home to a huge family surnamed Hu that produced generals, ministers and businessmen in past centuries. Perhaps the best-known contemporary descendant is former President Hu Jintao.

There are ancient sites scattered around the very small downtown of Jixi, all within one hour’s ride. Even during the summer holiday peak season, not many visitors stop here. Most of the tourists are senior citizen groups from nearby places, including Shanghai. 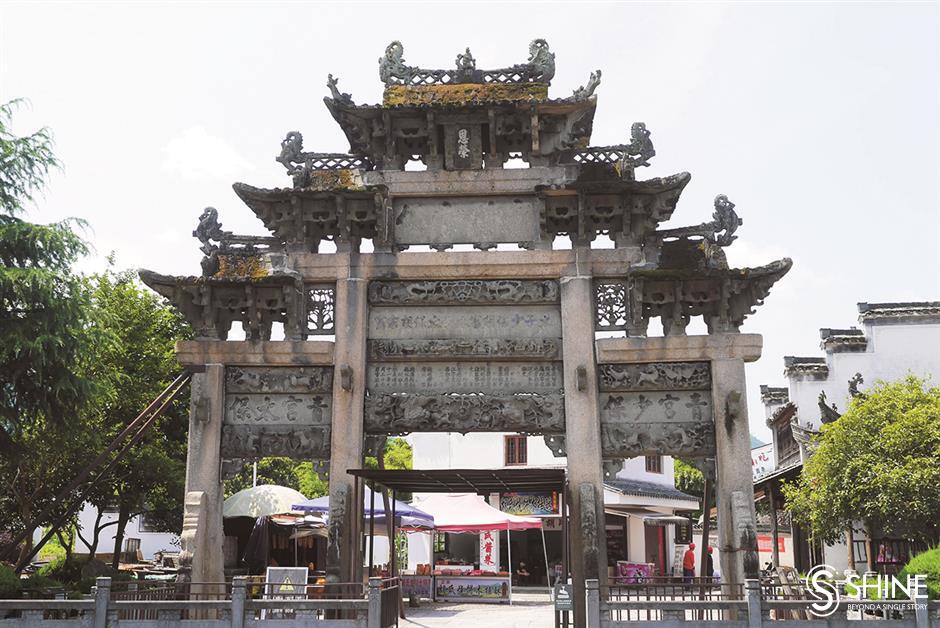 The Yishi Shangshu Memorial Archway was built about five centuries ago to commemorate two eminent figures from the Hu family.

My first stop is Renli, a 1,000-year-old village. Before going there, I read some comments online and was surprised to find widely divergent opinions about the place. Some said it was one of the most fun places they had ever visited; others said it was boring with nothing to recommend.

I guess it was up to me to find out who was telling the truth.

The village is about 20 minutes’ walk from the main road. It has a service center and a ticket office, but the actual entrance to the village is not easy to find. You need to walk along a field for 100 meters before turning onto a narrow path and walking further. A small, ancient-looking stone archway is the main gate.

All the staff in the sightseeing area seemed to be the villagers themselves. A man checked my ticket, showed me around for a bit and then told me that he had to go home to make lunch.

I began to understand the diverse judgments of the place. If you are expecting a site to offer stunning natural views or weighty historical artifacts, then you are likely to be disappointed. If, however, you want to see life in an ancient village without tourist trappings, Renli will be a pleasant experience.

Old Huizhou-style architecture, centuries old, is well protected, but there is more than that. People there have somehow retained an old lifestyle, living along narrow lanes that could hardly fit a vehicle. Some families hang cured ducks and geese outside their homes. To be honest, the smell is far from pleasing in the summer heat.

To me, the most impressive place in the village was an old pharmacy. Although some Western medicine is now available in the shop, it started out as a traditional Chinese medicine pharmacy. A wooden closet with multiple drawers sits against one wall, and the wooden counter in front of it looks much older than the grumpy old man who was sitting behind it.

The owner’s eyes were fixed on an LCD TV set, which seems a bit incongruous in that setting. Before I asked anything, he glanced at me and said: “Yes, everything here is real and is very old.”

Then, on a second thought, he added: “No photos inside,” before turning his attention back to the TV and ignoring me completely.

The pharmacy and the TV set seemed to exemplify Renli. The village has kept up somewhat with modern development, but time seems to slow here and people are content with that.

Around noon, I wandered into Hongxia, one of the few restaurants in the village. The eatery is set up in the owner’s family house, called Yigu Hall, which was built in 1711. Round tables with bright red table cloths are placed in the yard, and the main hall looked as if it were about to host a traditional Chinese wedding banquet.

The owner, a young woman, told me that her ancestors were typical Huizhou businessmen, plying tea and staple foods. The first owner of the house was a centenarian before he died, and now the extended family has more than 100 people stretching over five generations.

“I’d recommend just one dish here,” she said. “The tofu ball soup. It is an essential dish on significant occasions in Renli.”

The name of the dish is actually too humble. She served me a big bowl of soup that contained tofu balls, black fungi, tomatoes, green vegetables and pork ribs. The balls were made of mashed tofu mixed with diced shiitake mushrooms and ground pork. The dish was full of different flavors and textures. 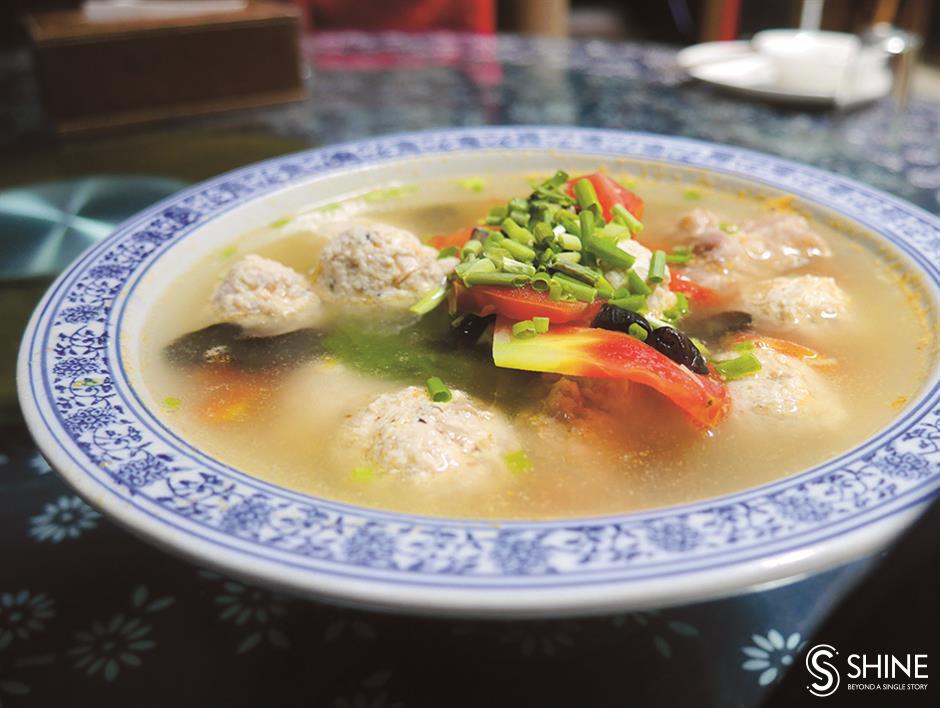 Tofu ball soup is a specialty served on significant occasions in Renli Village.

Compared with Renli, the Longchuan Scenic Area about half an hour’s ride away is more visited by tourists. Yet it falls short of a fully developed sightseeing destination. There is only one bar offering Western food in Longchuan, indicating that most young city dwellers with dreams of “going faraway to a poetic place” haven’t yet discovered this place.

The scenic area is a village inhabited by the previously mentioned Hu family. Actually, in Jixi, the family is scattered in four different locations. This one is called Longchuan Hu.

Longchuan, which refers to the place where the dragon lives, is the name of a river flowing through the village. On both banks stand some of the most beautiful Huizhou architecture in the country.

One structure is a memorial archway built in 1562. Called Yishi Shangshu, the archway was built to commemorate general Hu Zongxian (1512-65) and his uncle Hu Fu, who was an internal affairs minister. Hu Zongxian is famous for his triumphs in battling Japanese pirates on China’s eastern coast, and there is a museum dedicated to him in the village.

The three-layer archway shows what a lofty status the two men enjoyed. The exquisite stone carvings on the archway include almost all auspicious elements of Chinese history: a roc spreading its wings, two dragons frolicking with a pearl, a lion playing with a silk ball and a crane flying to the sky.

The archway also features a vivid stone painting that depicts civil and military officials touring the country, resting in pavilions or fishing by the river. It is amazing that so much contentment could be squeezed into just one archway, with everything so vividly depicted.

Not far from the archway stands the ancestral temple of the Hu family. This is the true gem of the entire village. I lingered in the hall for nearly an hour and was still reluctant to leave.

With a history of more than 500 years, the ancestral hall is nicknamed “a museum of wood carvings.” Huizhou architecture is known for its wood carvings on pillars, beams, doors and window frames, and this hall is a heaven for lovers of that art form. 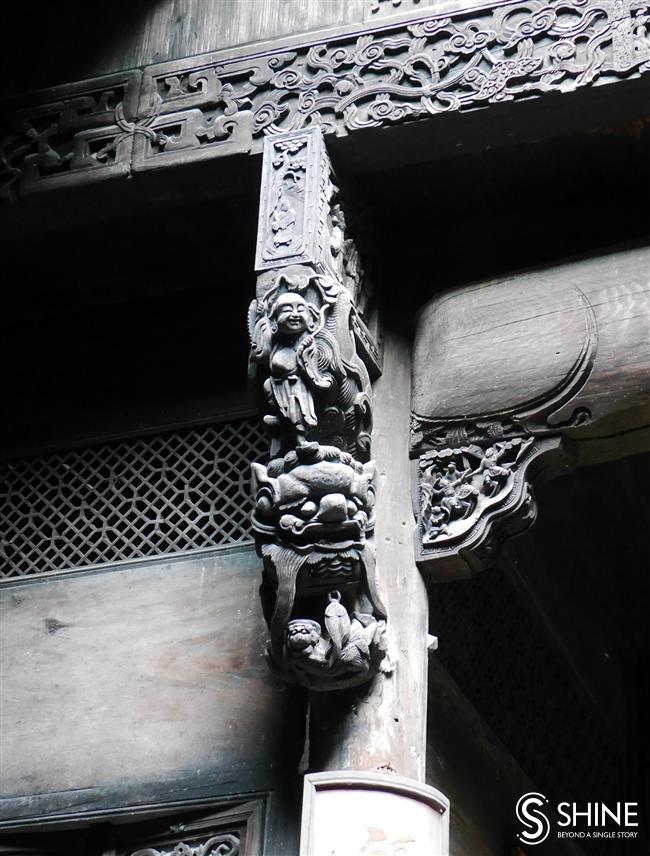 Wood carving is an iconic feature of Huizhou architecture.

A screen in the main hall is carved with 100 deer in different postures. Deer symbolize fortune and good health in traditional Chinese culture. The more you look at the carvings, the more they seem to come to life.

Past the main hall is the “resting room,” a place holding the memorial tablets of Hu family ancestors. One hundred vases are carved on the doors to the grand room. In mandarin, ping, or vase, is pronounced similarly to the word for “peace.” The vases — all in different shapes — express the wish for ancestors to rest in peace and give the family a blessing to enjoy a peaceful life.

Behind the doors are rows of memorial tablets in a shrine. The room is dim, but rays of sunshine cast through the square-shaped carvings on the doors into the shrine convey the feeling of a blessing. For hundreds of years, the Hu family has indeed been blessed in the place where the dragon lives.

It takes about four and a half hours from Shanghai to Jixi by high-speed train. There are barely any English services available in the town, so booking cars through Uber or Didi to sightseeing areas is advisable. Visitors can find accommodation around Jixi North Railway Station, an area of hotels and youth hostels. 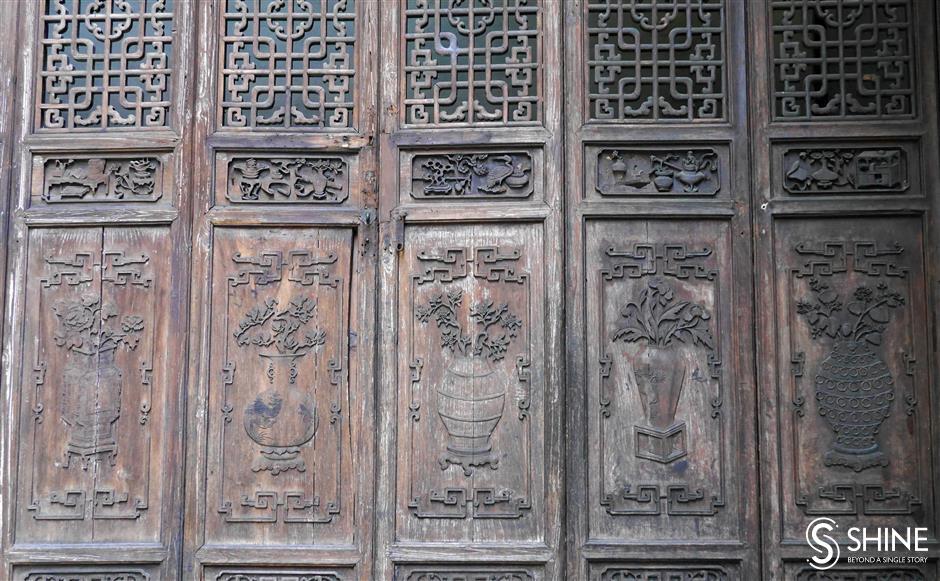 Vases of different shapes are carved on the doors to the “resting room.”

Special Reports
ADVERTISEMENT
61906
,
Shanghai Disney Resort becomes winter wonderland
Exploring farmer art, old-fashion villages
Getaway amid a dreamscape of rice paddies
From the Stone Age to the more modern in a day trip
Fengxian's makeover attracts day-trippers
Get the most out of one day in Jing'an
2021 China Flower Expo coming to Chongming
A day in the life of Changning
Hangzhou landmarks make national protection list
Eco-island a crab, rice and tangerine dream
EXPLORE SHINE