Be a time traveler from days of yore to the present

Connecting the Pudong New Area and Baoshan District, Metro Line 7 is like a time machine traveling from Shanghai 500 years ago to modern times. The downtown portion of the line coincides with other lines, but at each terminus there are places worth exploring for those who want a deeper understanding of the city.

The park is known as the best venue to view cherry blossoms in Shanghai. That explains why it is jammed with thousands of people when the trees bloom in spring. However, the park is not lacking for attractions in other seasons.

Lotus, roses and other flowers keep the park colorful after the cherry blossom season. A bird garden gives visitors a close-up view of peacocks, geese, flamingos, swans and nearly 80 other breeds of birds.

“It is a rare experience in Shanghai,” commented an online visitor who goes by the screen name Corn Pancake. “You can touch some of the birds and feed them with the grain provided by the park.”

Corn Pancake also reminded visitors to “treat the birds gently” because there are no fences or cages between man and bird.

Apart from the bird garden, a dinosaur garden resembles a tiny “Jurassic Park.” With all kinds of rides and entertainment facilities, it is an ideal place for families. 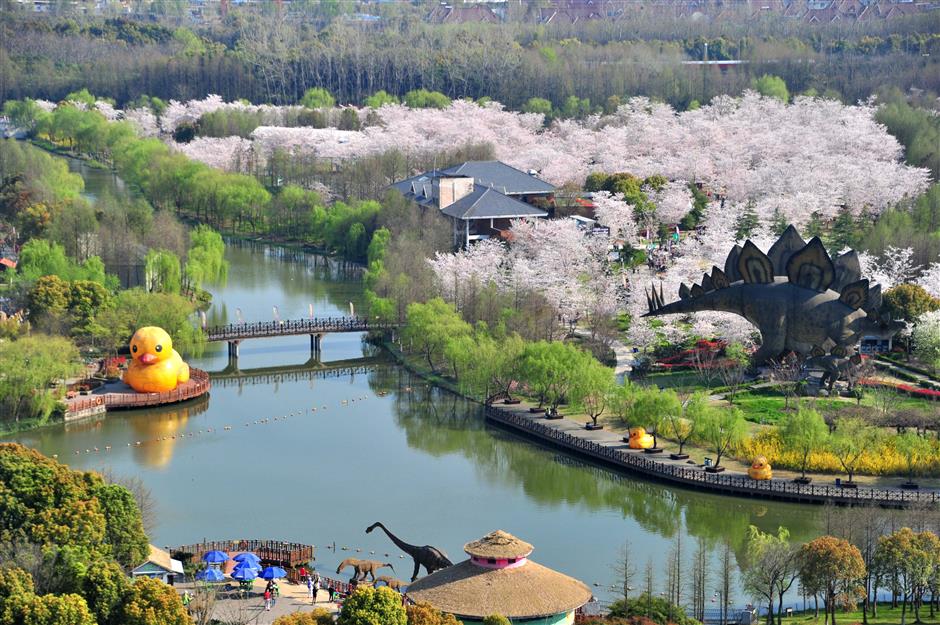 In spring, Gucun Park is the best venue in the city to view cherry blossoms.

Near Gucun Park is an ancient lane called Juquan. A business area has opened there in newly built, pseudo-Chinese classical buildings. Xinyi Tea House is one of the most popular restaurants.

Walking in its Chinese-style garden after a big meal is also recommended.

The natural wetland in the Pudong New Area was wasteland before the 2010 Shanghai World Expo. After a big makeover and new water treatment, it has become another “green lung” in the city.

Located beside the Huangpu River, the Houtan Wetland Park provides a walkway along a long creek in the park, where visitors can enjoy a natural environment of trees, water plants and flowers.

Ideal for bird lovers, too. Many species of wild birds perch here, and it’s not uncommon to see photographers with long lenses in tow to record the wildlife.

From the China Art Museum visitors can walk straight to the wetland through Expo Park. 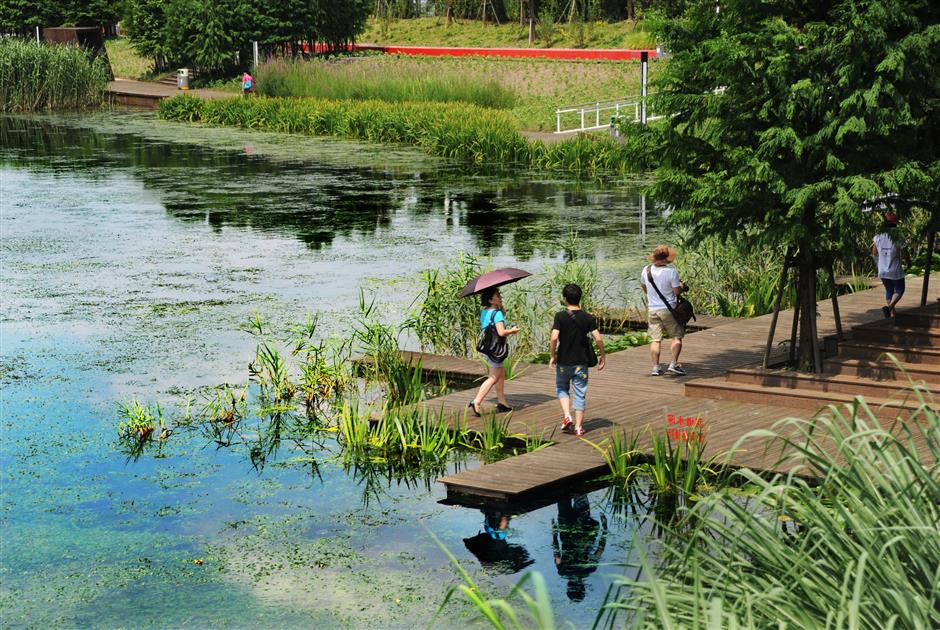 Houtan Wetland Park is another “green lung” in Shanghai.

Yijianfang Tea House, a Cantonese-style hotpot restaurant in Houtan Wetland Park, attracts people for its food as much as its views. Guests can enjoy great view of the Huangpu River while sitting on the terrace. It also has a glass cottage used as a private dining area, where patrons can enjoy a creek view of the park.

As for the food, the restaurant offers very fresh seafood and organic vegetables in its hotpots and other Chinese-style dishes.

The natural flavor of the food is preserved by a light hand in seasoning. The complimentary congee before meal is also highly praised.

It is quite apparent to the naked eye how the modern and the ancient converge in this area. Luodian Town in Baoshan District, with a history of more than 500 years, was a prosperous commercial hub in ancient times. It was nicknamed “Golden Luodian.”

Yet today, right beside the town, man-made Meilan Lake is a new landmark of the district. The lake was created about a decade ago, and around it has grown a modern leisure zone, where people can enjoy golf, fishing and other outdoor activities.

Some of Luodian’s past is well preserved, including a stone bridge as old as the town itself. Dafeng and Fengde bridges have become two icons of the town. Visitors come from all corners on Shanghai especially to see these two bridges.

Both spans have carved couplets of the local motto: honesty, generosity and benevolence.

Some old buildings, including a Chinese hall more than 300 years old and a Christian church built during the 1930s, are open to the public.

The Baoshan Temple might be the busiest place in the town. The temple, first built in 1511, still attracts people from all over the city who come to pray. Since the Qing Dynasty (1644-1911), the temple has endured wars and severe damage, but parts of the construction still survive. Although the temple was modified into a factory dormitory during the “cultural revolution” (1966-76), the remaining buildings were still protected.

On the banks of Meilan Lake on the edge of Luodian Town, the environment undergoes a dramatic change. There you find a replica of a real town in Sweden, with Scandinavian-style buildings and town layout.

Although nothing here is “real,” it still creates quite a special place. It’s a favorite site for wedding pictures. Walking in the area, no matter what time of year, one always sees women in wedding dresses being posed by photographers. 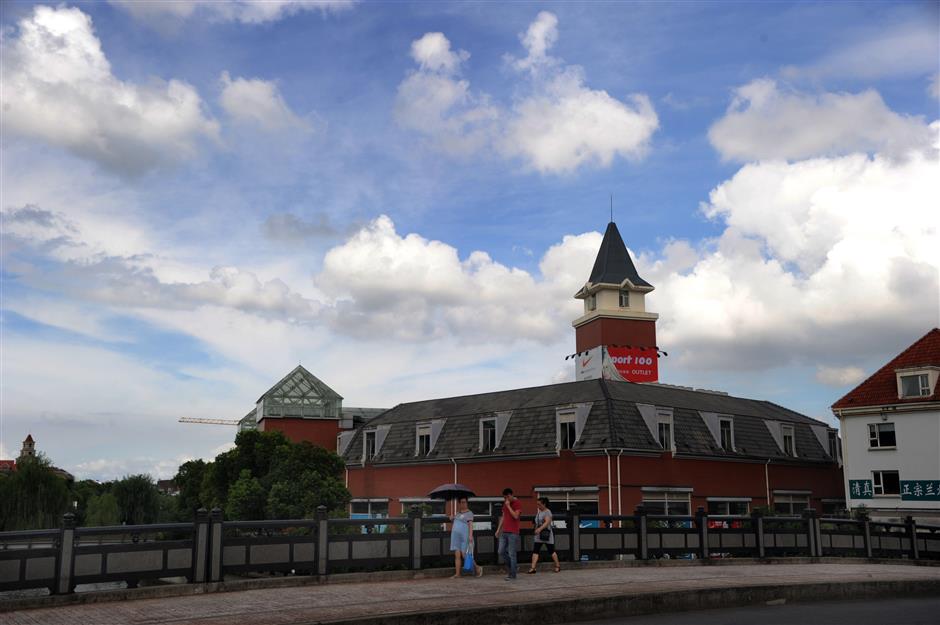 You’ll think you are in Sweden in a replica town at Meilan Lake.

Noodles with red soup made of soy sauce and chicken stock are the most popular here. Other snacks include fried scallion pancakes, wontons and seafood congees.

There are not that many dining choices in the town, so the snack shop does a fairly brisk business. It’s a nice place to rest after walking around. The eatery is owned by a travel-loving couple, who have decorated the place with photos and souvenirs.

The latest exhibition is a collection of works by Qian Shoutie (1897-1967), including traditional Chinese paintings and calligraphy. Many of the 89 paintings on display show landscapes, birds and flowers, and figures for the first time in public. The exhibition runs through the end of September.

Standing exhibitions in the museum include Old Shanghai-style comic books and an exhibition composed of 150 works donated to the museum by Chinese collectors from around the world.

An animated version of the painting “Along the River During the Qingming Festival” is also exhibited in the museum. As an iconic exhibit during the World Expo, the painting drew millions of visitors. Now, people can still watch the painting from the Northern Song Dynasty (960-1127) come to life with modern technology. 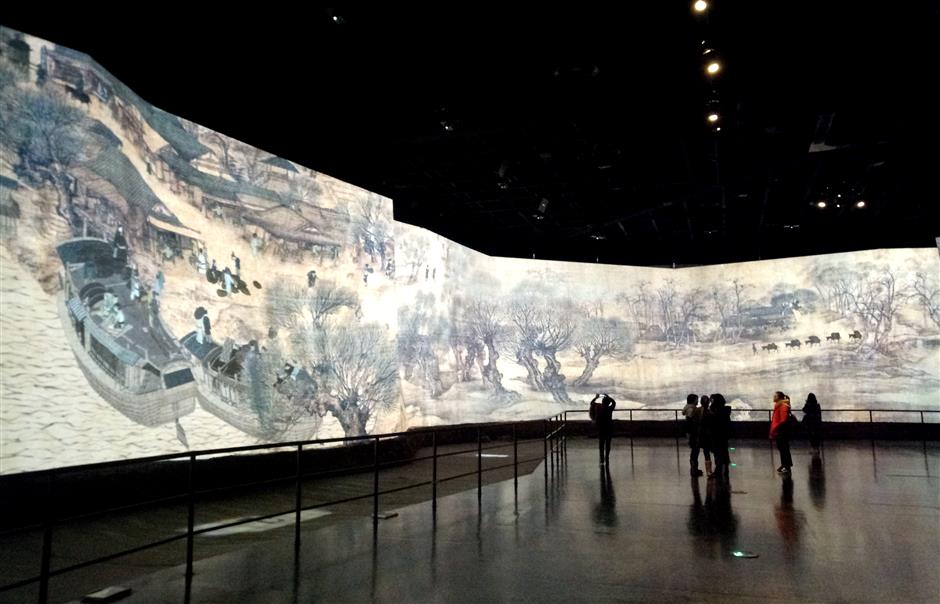 An animated version of the painting “Along the River During the Qingming Festival” is exhibited in China Art Museum.

After the World Expo, the Expo Axis, a grand avenue that connected several main pavilions, was modified into the River Mall, one of the largest commercial areas in the city. The area provides endless dining choices, covering cuisine styles from almost everywhere in the world.

Expo Residence, however, is special among its competitors. The restaurant resembles a modern glass house from the outside, but it is decorated as an Old Shanghai mansion inside. The dishes here are actually Cantonese. The mix-and-match style provides quite a unique dining experience for customers.

Special Reports
ADVERTISEMENT
61886
,
Shanghai Disney Resort becomes winter wonderland
Exploring farmer art, old-fashion villages
Getaway amid a dreamscape of rice paddies
From the Stone Age to the more modern in a day trip
Fengxian's makeover attracts day-trippers
Get the most out of one day in Jing'an
2021 China Flower Expo coming to Chongming
A day in the life of Changning
Hangzhou landmarks make national protection list
Eco-island a crab, rice and tangerine dream
EXPLORE SHINE