A stroll down memory lane at Hubin Pedestrian Road

After five months of upgrading and construction, Hubin Pedestrian Road has opened to the public.

The renovation offers visitors an immersive experience integrating sightseeing and shopping, and hopes to make the road a new calling card of the city.

Known by locals as the “Parlor of Hangzhou,” the Hubin area traces the eastern side of the West Lake and contains six leisure spaces, including the No. 1 Park with the city’s largest lotus area, covering around 1,000 square meters. 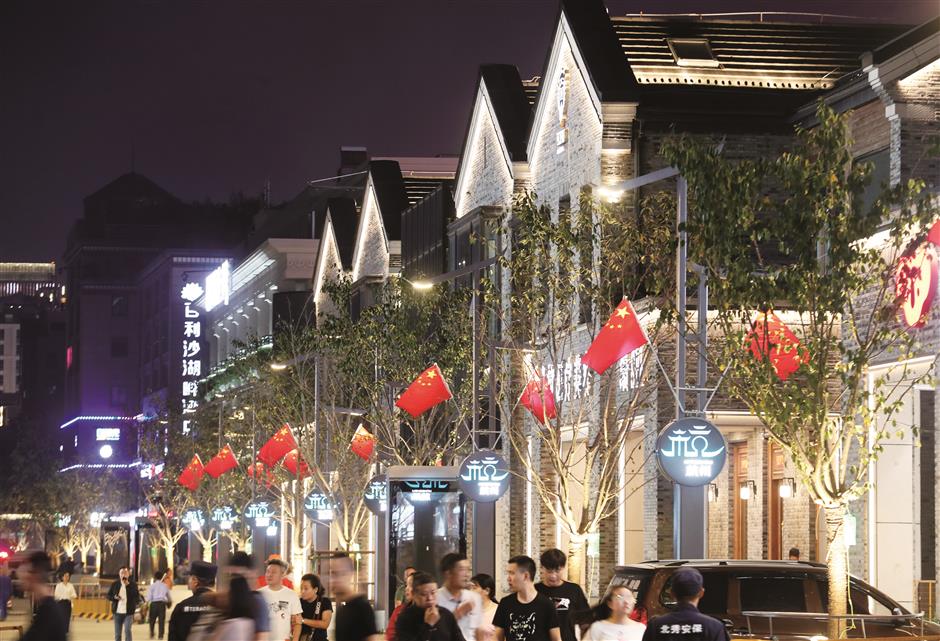 Night view of Hubin Pedestrian Road, which opened to the public after five months of upgrading and construction

Hubin is also home to many luxury brands and boutiques, and it is also an area full of restaurants serving various delicacies and desserts. A  musical fountain attracting flocks of visitors adds charm to it.

Hubin was made a pedestrian road in 2003. After years of development, it has evolved into a block covering sections of neighboring roads.

The pedestrian flow hits 50 million a year, while its total retail volume has kept an annual growth rate of 10 percent during the past five years. The road has nine shopping centers with more than 1,300 brands. However, infrastructure and facilities were struggling to keep up with its accelerating development in recent years.

Now, the newly revamped area covers 42 square kilometers, differing from its counterparts in the fields of technology and design.

This area is equipped with a smart platform, sharing information from the police, market supervision, urban management and fire protection, and providing services from map guidance to advertising. A smart platform is embedded in every streetlight, linking visitors and the commercial block.

It allows people to check real-time pedestrian flows, available parking spaces, bus and Metro routes and hotel occupancy rates, and to book tables at a restaurant to avoid queues.

The platform also analyzes online statistics. Merchants can adjust their operation strategies according to the consumption conditions, and the police office can divert pedestrian flow if the place is overcrowded. 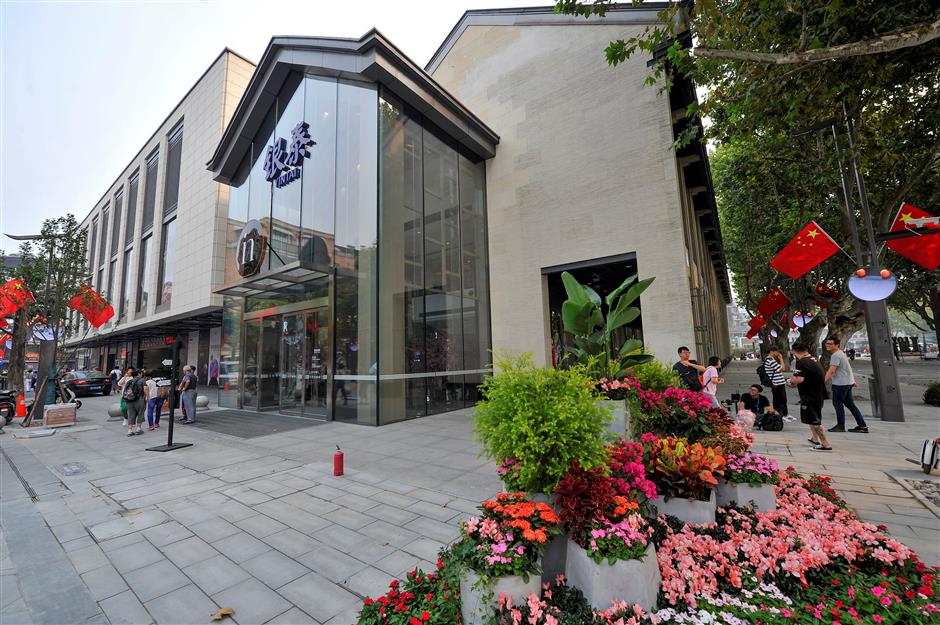 Hubin Pedestrian Road is home to many luxury brands and boutiques

The smart platform is based on the “City Brain” system, which was built by Hangzhou government based on big data and artificial intelligence.

Millions of pieces of data from official departments have been pooled on to the “brain” and share between units.

Except for smart facilities, the road features a distinct Hangzhou style.

Road slabs are engraved with poets themed in Hangzhou dating to the Tang Dynasty (AD 618-907) and Song Dynasty (960-1279). Wave and waterdrop patterns are commonly seen in a bid to echo with the adjacent West Lake.

“Hubin is the only one combining its landscape with its shopping area among the first 10 renovated pedestrian roads in China. Therefore, we put designing focus on the integration of nature and commerce to highlight the feature,” said Chen Zhengda, vice dean of art and design department, China Academy of Art.

Roadside benches are designed with a lighting system, which can change modes according to different seasons and festivals, in an effort to match with surroundings and create a festive vibe.

The upgrading construction renovation also includes growing more plants and flowers along roads in the lake area and outlining pavilions, bridges and pagodas with lights to create a more impressive atmosphere at night.

The facades of roadside buildings are decorated to bear Hangzhou characteristics. Roofs are highlighted by Hangzhou-style lamps. The landmark, Dongpo Theater, is designed with the Southern Song Dynasty (1127-1279) style eaves, rafters and beams, adding historic light to the area.

A group of time-honored brands, including Zhang Xiaoquan scissors, Fanghuichuntang Pharmacy and Maoyuanchang glasses, have opened a pop-up store, a flagship outlet and an online-to-offline shop along the road.

Formerly, these stores faced stiff competition from the Internet and had been close to closing down. Now they cash in on the e-commerce trend to revive their heritage with government support.

In addition, the road will be developed into an innovation spot for a “New Retail” concept, which was created by Jack Ma, Alibaba Group’s founder. Alibaba has employed its power and logistics to advance the collaboration of online commerce with offline shopping.

Hubin area hopes to set a good example of urban construction and tourism improvements for other cities.

In a bid to promote the area, government invited China Academy of Art to create a logo for publicity and professor Chen designed it.

“When I looked up archives of Hangzhou, I discovered the outline of the West Lake was so mild and smooth that it reminded me of a lotus leaf,” Chen told Shanghai Daily. “The lotus has been a symbol of Hangzhou since ancient times, so the logo is in the shape of lotus leaf to present the lake and Hubin area.”

Hubin Road can date back to the Southern Song Dynasty when Hangzhou was made capital. It has been hustling for a millennia and considered to be an epitome of Hangzhou’s modern development. 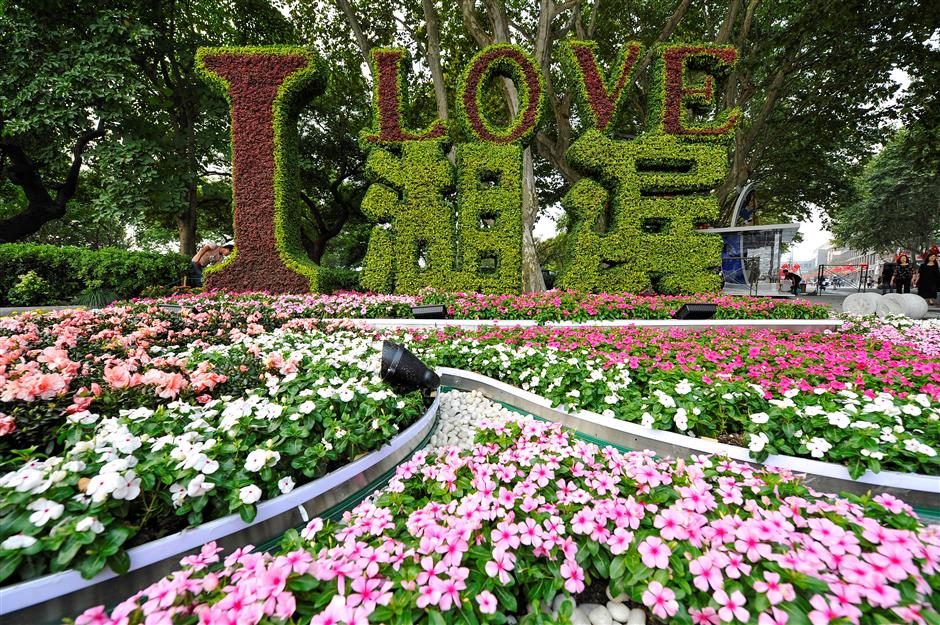