Zhejiang Province government has announced that four old Hangzhou villages would be provided up to 7 million yuan (US$990,000) in financial support this year to preserve their distinctive architecture and local ways of life.

The villages have resisted the tides of change that swept across many other parts of China. To protect the old structures, some local governments have relocated residents to new houses.

In addition to architecture, the natural environment is also being protected, with sewage being treated and new infrastructure being built. These improvements are attracting tourists and creating a boom for the local economy.

As the novel coronavirus epidemic is winding down in China, and the curtain of spring well and truly opens, these charming villages are well worth a weekend trip, especially for those coming from nearby Hangzhou.

The village is situated at the confluence of the Tianziyuan and Qingyuan rivers. Its name literally means “surrounded by creeks” in Chinese.

The villagers are believed to be the descendants of poet and philosopher Zhou Dunyi, who lived during the Northern Song Dynasty (960-1127). They moved to the area some 600 years ago and since then have carried down Zhou’s lotus-admiring spirit.

In Zhou’s poetry, the lotus is the epitome of nobility and incorruptibility because the flower grows out of mud but keeps its blossoms and leaves clean. His prose “Ai Lian Shuo” is still one of the most renowned poems in China.

In summer, undulating lotus blossoms cover the village. These flowers are what attract many visitors and bring additional tourism revenue for residents.

In recent years, infrastructure and roads have been given a facelift, while guesthouses and small eateries have been built to offer homey accommodation and local cuisine. So far, there are more than 55 family-run guesthouses with 700 beds in the village. 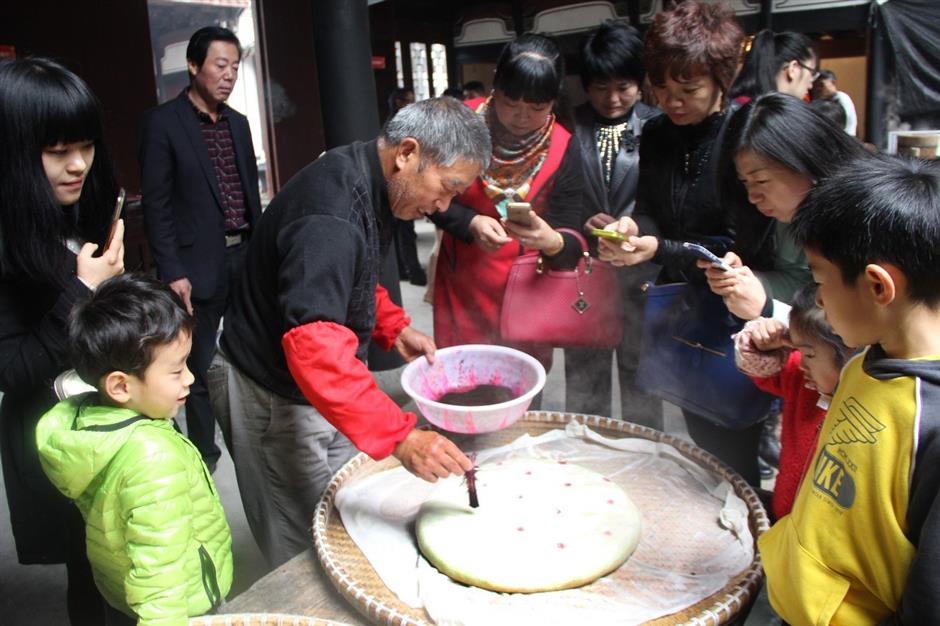 The village still looks like a remnant from the past. There are Ming Dynasty antique bridges, temples, ancestral halls and other structures with sculptured beams and engraved rafters.

In recent years, the local government has switched focus to tourism, and its lush bamboo forests provide a natural getaway for people living in concrete jungles. Locals have developed bamboo products including daily utensils, furniture and knickknacks as souvenirs.

The area also has dozens of family-run eateries. These simple bistros give travelers a chance to experience life like a local and serve mouth-watering meals made from fresh catches, locally raised poultry and wild herbs. Free-range chicken, lettuce, bamboo and fish dishes are all highly recommended. The traditional glutinous rice cakes are also worth a try. 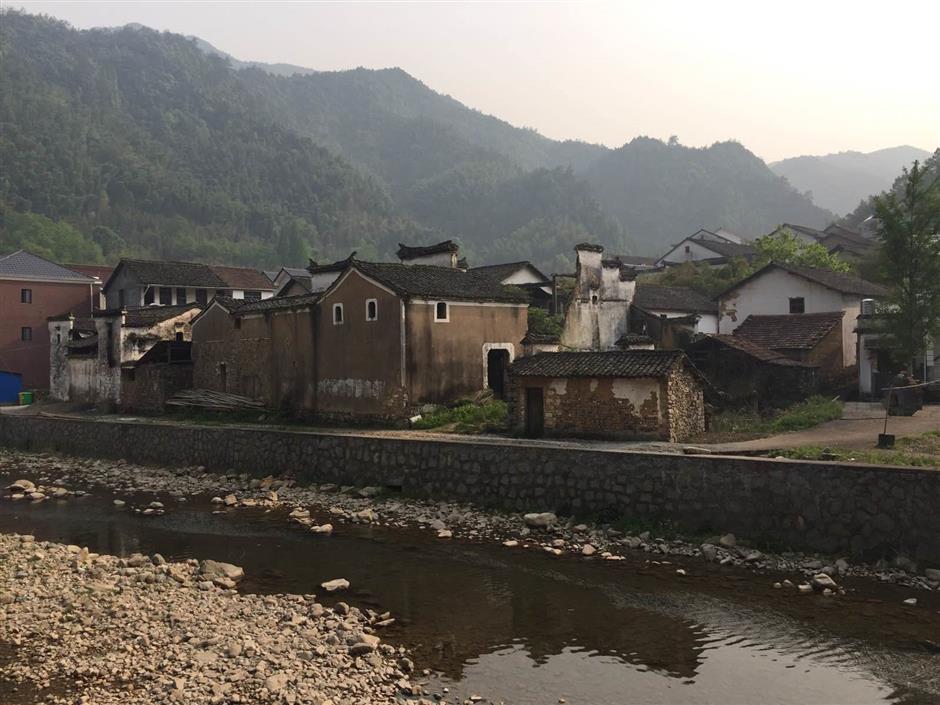 This village is located at the border of Hangzhou and Anji County. Hidden in hills and covered by lush vegetation, it still retains some black-tiled, white-wall houses that date back to the Ming (1368-1644) and Qing (1644-1911) dynasties.

In olden times, the village was a vital point along the Huihang Ancient Road, through which merchants transported daily supplies between Zhejiang and Anhui provinces.

Historically, Shimen was a rendezvous for trade of traditional Chinese medicine and herbs. Today, the village is still known for TCM and natural remedies.

The ancient mountain road is no longer used for traffic, but it still offers some enchanting views of the surrounding countryside, especially in spring.

The village lures hikers for its lofty trees, refreshing creeks and precious herbs. Walking along the village’s winding roads, it’s easy to imagine yourself in a Chinese ink-wash painting. 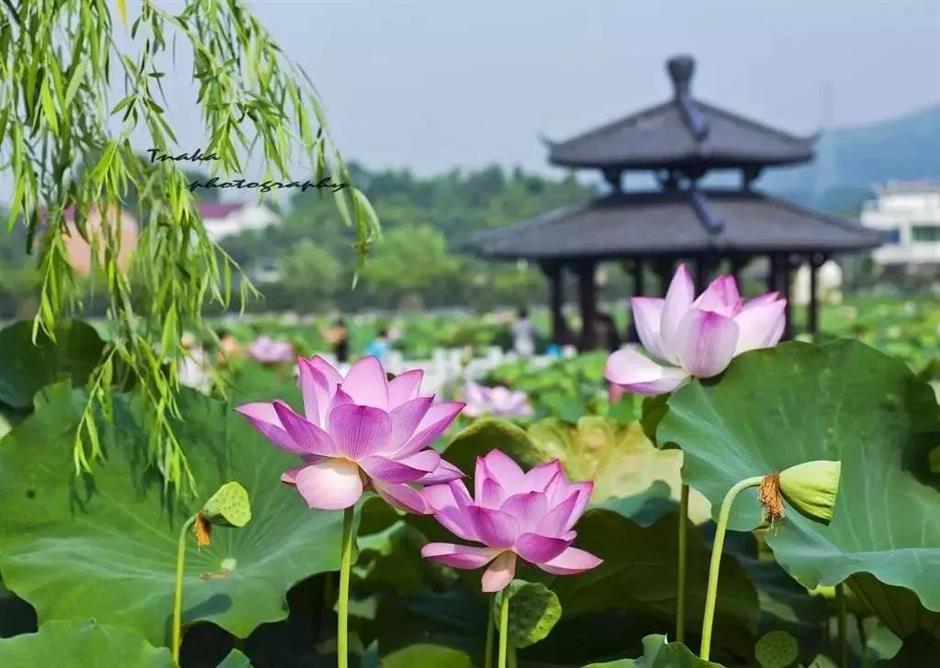 The village is located near Daci Mountain, a spiritual place for Buddhists and followers of Confucianism. What makes it famous is a 147-meter-high standing Buddha statue.

The village is dominated by people surnamed Ye. For centuries, the family lived here and made a living from growing lotus plants. Unlike Huanxi Village, where lotuses are mainly for appreciation, here lotuses are planted for seeds and roots.

The village produces vacuum-sealed lotus seed congee and root powder. Local products have found favor with consumers by virtue of their aromatic smell and pleasing taste. Today, lotus flowers have developed into a pillar industry of the local economy, with a growing area of 26 hectares.

Ye-surnamed villagers still worship their forefathers in the ancestral hall during festivals and ceremonies. The hall, built in the late Ming Dynasty, features up-turned eaves, painted beams and carved windows.

Mythical creatures, legendary characters, flowers and auspicious clouds are sculpted on the wooden windows and rafters. These sophisticated patterns and carving techniques epitomize the wooden-engraving craftsmanship of the region.

Special Reports
ADVERTISEMENT
61761
,
Traditional villages where time stands still
For a spring break, take a stroll in our beautiful backyard
Been there, done that? Not at these quirky sites
B&Bs in rural areas add artistic flourish to farmland holidays
Xiangshan awakens with arrival of spring
Hangzhou abounds with festival activities
A step back in time in any language in Songjiang
Fudan University founder's home is renewed
Mount Chaoshan celebrates plum blossoms with cultural activities
All aboard for a culinary excursion that will tantalize the taste buds
EXPLORE SHINE