The curious tale of a decaying old mansion forgotten by time

Xiaonanmen is one of the oldest areas of Shanghai and at one time was among its busiest.

The area is characterized by labyrinth-like residential complexes, with narrow lanes and houses even older than shikumen, the city’s famed gated residential houses. Xiaonanmen translates as “small southern gate.”

The area is also the birthplace of venerated restaurants serving classic Shanghai cuisine. Some of them have moved to other places, but others, such as Dexingguan, are still there.

Last year, a redevelopment project was launched in the area. Residents, many of whom had lived there their whole lives in narrow houses without private bathrooms or kitchens, were relocated to brighter, larger and generally better homes. But as they left, the vitality of the area began ebbing away.

Still, I was curious. I ventured into the area trying to look for left-behind traces of its past. After all, Xiaonanmen was the site of the local public security department hundreds of years ago, so there was a bit of history to explore.

Chancing across Shuyin Lou in Xiaonanmen was a mere coincidence. I was lost in a half-deserted longtang called Tiandeng Lane, where most doors were closed and windows sealed. There, I passed a stone tablet that reads “Shuyin Lou — protected historic site” on the front of a black door.

I looked it up on my smartphone and discovered that it was an ancient mansion and private library first built in the Ming Dynasty (1368-1644). The name literally translates as “concealed books.” It is the only Suzhou-style private mansion in downtown Shanghai. 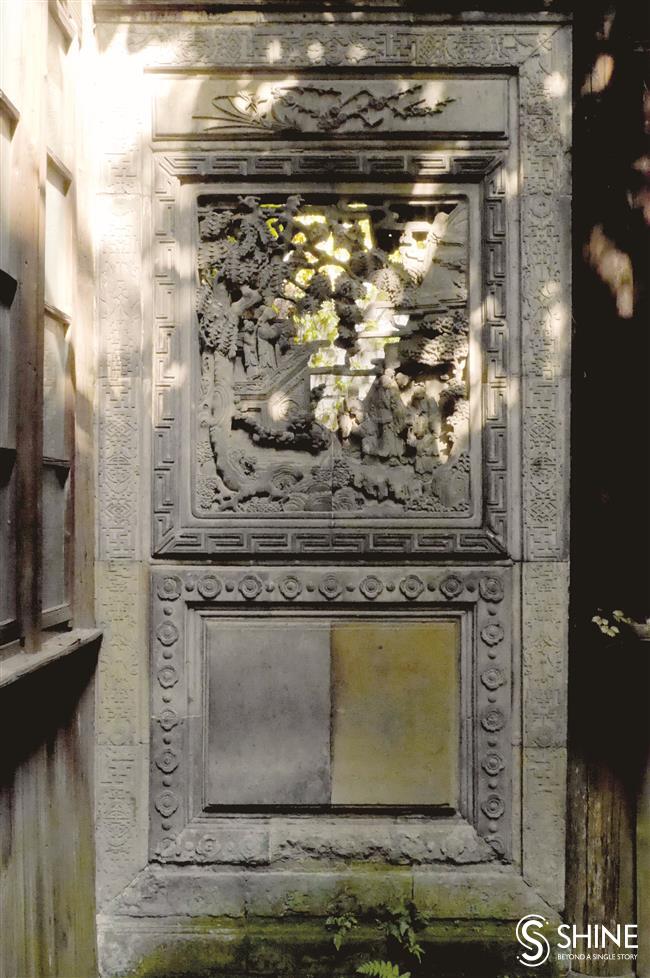 A stone carving in a corner of Shuyin Lou reminds people of the mansion’s past glory.

The mansion is actually open to the public, but visitors need to call the current owner to make an appointment. Fortunately, there was a cell phone number attached to its online introduction. I dialed it, fearing it might be a disconnected number, but after several signals, a woman picked up.

“Is this Shuyin Lou?” I asked.

“Is it still open to the public?”

“Sure, but please wait for a while and I’ll come over and open the door for you.”

Fifteen minutes later I found myself in a yard with a woman with long hair and a broad face. She introduced herself as Guo Yuwen, 68, the owner and keeper of the mansion, and the mother of an autistic son.

“The number of visitors has decreased dramatically because of the novel coronavirus epidemic,” she said. “So, I was a bit lazy about weeding. Please mind your step here.”

I looked around at the typical Chinese yard apparently in need of some maintenance. I was surprised to find that the site is basically an ancient ruin that has somehow survived the rava­ges of time and neglect.

I had never visited any “protected” site quite like this before. Thick Boston ivy crawled over the high yard walls and the roofs. The yard was covered with velvety moss and lush weeds. The buildings were nearly crumbling. 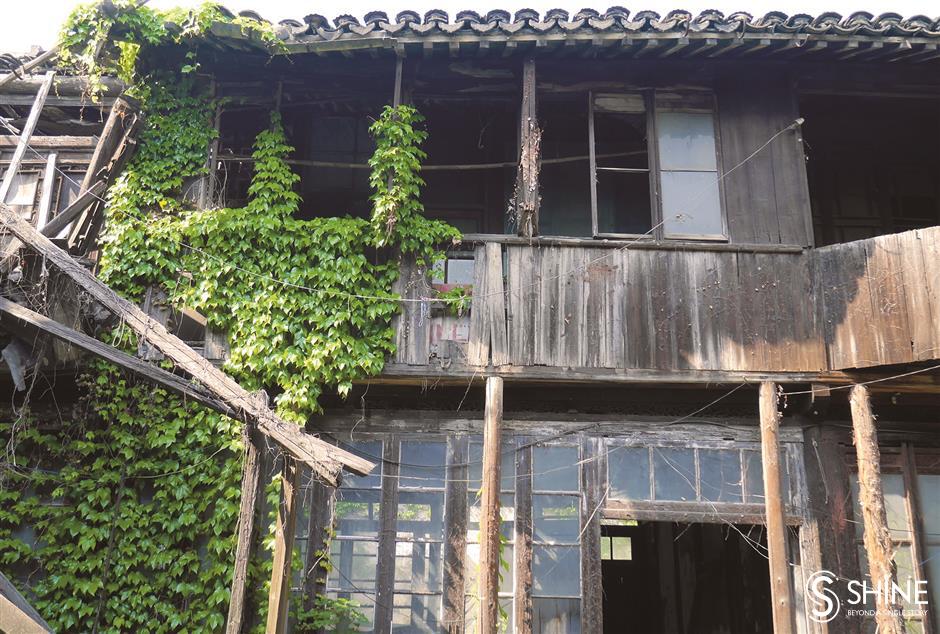 The mansion retains the original facade that existed when Guo’s ancestors first bought the house in the 1930s.

The beams, doors and arches, however, were in much better condition. Delicate wood and stone carvings, mainly drawn from Chinese mythology, showed the taste of former owners. Somehow, the carvings hadn’t weathered much, which seemed like a minor miracle given the general state of the site.

Although people living in the area call it the “mansion of 99 rooms,” it actually has something near 80 rooms.

Guo showed me around while relating the history of the mansion. It was first built by a Ming Dynasty official named Chen Suoyun. In the beginning, the mansion was just a small part of Suzhou-style Rishe Garden, but after it was purchased by the wealthy Lu family from Pudong — the same Lu family that lent its name to modern-day Lujia­zui — the mansion was rebuilt partly into a private library. The garden disappeared long ago.

“That’s why the yard walls are especially high, much higher than traditional Chinese mansions,” Guo explained. “It was to prevent fire.”

Guo’s ancestor, Guo Wanfeng, was the third owner of the mansion. The shipping company magnate bought it as a family home in the 1930s.

“We had more than 20 people living here until the ‘cultural revolution’ (1966-76), when we were expelled from our home and the mansion was used as factory workshops,” Gu said. “The mansion was returned to us after the campaign was over. Now my siblings and cousins are mainly living abroad, and I have to keep the mansion in one piece mostly by myself, though I don’t live here anymore.”

It is obviously an impossible job. In its east wing, the mansion has an archway, a hall used to place a sedan and a main hall. There are bedrooms in the west wing, two auxiliary houses and two meeting halls. There are also three yards in the front, middle and behind.

“Local cultural relic protection authorities visit from time to time, adding pillars to support the buildings and so on,” Guo said. 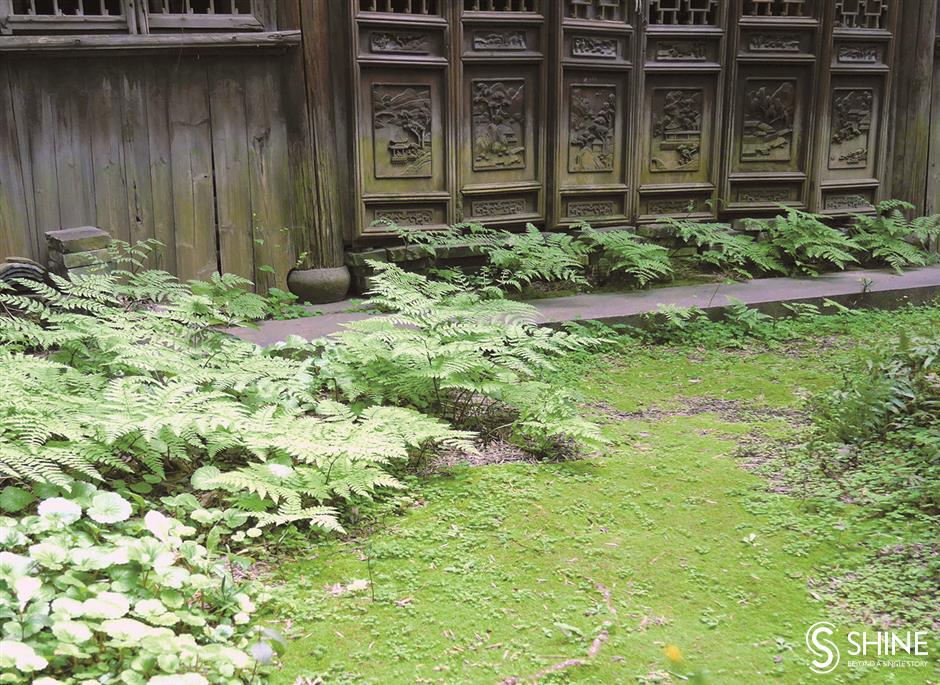 Moss, ferns and weeds grow in the yard of the house in a half-deserted lane in downtown Shanghai.

Her late father, she added, spent the second half of his life trying to protect the mansion after it was greatly damaged from use as factory workshops. In early 1994, a local TV station reported the situation of the buildings, and two factories compensated the family. All the money went to repair work.

But the mansion was soon forgotten by the public and remained more or less the same until a super typhoon hit the city in 2002, collapsing the entire west wing.

“My father was so sad that he cried and then passed away soon after at the age of 88,” Guo said.

After that, Shuyin Lou opened its gate to the public, trying again to attract public attention. But that plan for some kind of renaissance apparently failed. The mansion remains in a half-ruined condition.

Different eras all have left their own marks on the mansion: a loquat tree that is hundreds of years old, carvings from the Qing Dynasty (1644-1911), slogans painted during the “cultural revolution” and old relics left behind when Guo’s family moved out, such as a television set from the early 1980s and some pots. 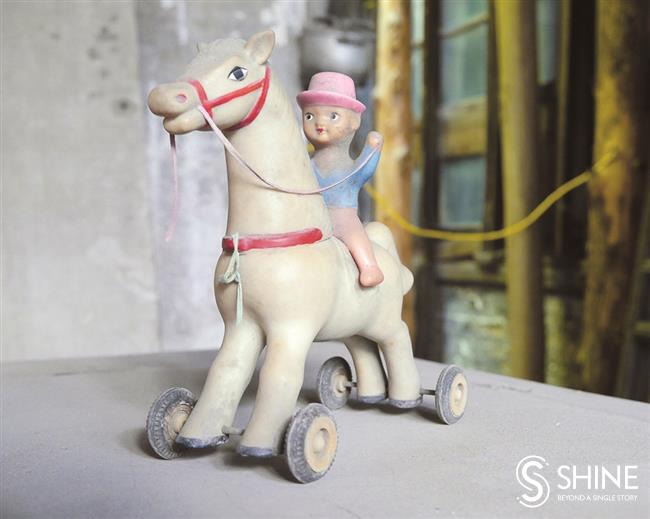 A toy cowboy is one of the family’s memorabilia still in the mansion.

“But with the reconstruction of Xiaonanmen, I think the local government will eventually buy the mansion from us,” she said.

“In fact, I heard talk that it might be restored as a museum. But now you can see the most authentic appearance of Shuyin Lou, even if it is not in good condition. Once it is restored, I think the vibe will be completely different.”

Walking out of Shuyin Lou and back onto the main street, I looked back at Tiandeng Lane and the mansion was now completely out of sight. It is said that the lane got it name, which translates as “sky lantern,” because of an oil lamp lit in front of the public security department so that people could find it.

But now few people ever get this glimpse of the past. With the long-time residents of the lane now scattering to all corners of the city, the memories of Xiao­nanmen have gone with them.

It made me wonder what this area would look like in 10 years and whether Shuyin Lou might have a part to play in a new page of history. I couldn’t help but wish Guo and her mansion all the best.

Xiaonanmen Station of Metro Line 9 is within walking distance from Shuyin Lou. However, it is rather difficult for a first-time visitor to find the mansion because it is concealed in a half-deserted old residential complex. Asking for directions and hoping a local will be helpful is more efficient than walking according to GPS instructions because so many gates of the complex are closed due to the coronavirus epidemic. If you don’t speak Chinese, it is advisable to take a Chinese-speaking person with you.