Getting back outdoors: an elixir and chance to do a bit of sightseeing

How does it feel to breathe that first puff of fresh air after being locked up at home for months? Wuhan native Christine Ye describes it as “cathartic.”

During a lockdown that began on January 23, the 29-year-old landscape designer left her immediate neighborhood only six times. She survived on provisions ordered online and collected at a designated spot in her residential complex.

Recently, Ye decided to stretch her legs and walk around Wuchang, where she lives.

“I saw on the news that the Yellow Crane Tower had reopened on April 29,” said Ye, referring to the iconic landmark of Wuhan. “So I thought that I would go have a look.”

The Yellow Crane Tower features prominently in all tour guide books about the city. Although it is celebrated as one of China’s “four great towers,” many locals like Ye don’t visit it much.

“I visited there once when I was about 10 years old,” she recalled. “It was with my parents and I only remember that the tower was full of people and it was extremely hot. To me, it was a place for tourists, just like the Oriental Pearl TV Tower in Shanghai.”

During the May Day holiday, however, nearly all the visitors that Ye encountered at the Yellow Crane Tower were Hubei natives who had been cooped up at home for months, just like her. And at that, visitors were sparse compared with pre-pandemic times.

“Personally, I felt it was a sort of ceremonial visit to the tower after the epidemic, as if to tell myself that we really survived,” Ye said. 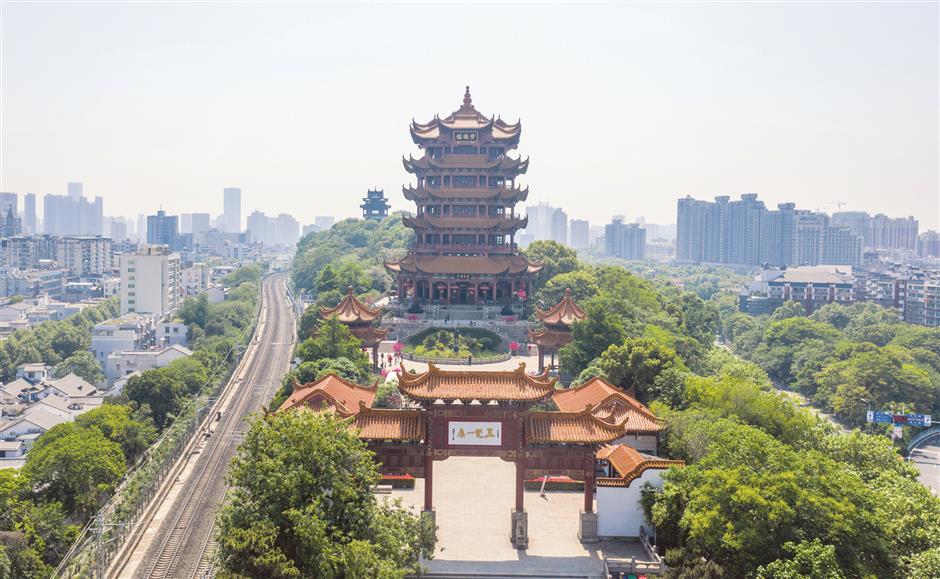 The Yellow Crane Tower, a symbol of Wuhan, reopened after months of closure, but visitor numbers are kept in check as part of precautions against a flare-up of coronavirus infections in the city.

The tower is worthy of “ceremony.” First built around AD 223, the ancient military installation — some contend it started as an inn — fascinated men of letters throughout the centuries. They praised the scenery from the top of the five-story tower as “splendor under heaven.”

Poems about the tower have been widely circulated down the ages and are included in modern textbooks for primary and middle school students. In effect, the tower is famous to almost everyone in China.

A poem written by Cui Hao (AD 704-754), entitled “Yellow Crane Tower,” is perhaps the best-known. It describes the poet’s homesickness, beginning with the words: “Long ago one’s gone riding the yellow crane, all that remained is the Yellow Crane Tower.”

The “one gone” refers to myths about an immortal riding a yellow crane to the site, where a tower was built to commemorate him.

But the tower doesn’t seem to have been very blessed by heavenly forces. It has been destroyed and rebuilt 12 times by warfare and fire. The last reconstruction on the original site was in 1868, but that, too, was destroyed. The current tower was built in 1981 at a site about a kilometer from the original one. The design is based on the 1868 version but more magnificent.

“Now the interior of the tower is more like a museum on the history of the tower,” Ye said. “But if you climb to the top, you can see the scenery on both banks of the Yangtze River and the grand bridge crossing it.”

Climbing the tower was a bit of an effort for Ye after so many weeks of inactivity indoors.

“My legs were sore when I reached the top,” she said. “But looking out of the tower, I felt so fresh and alive. Even the air smelled good.” 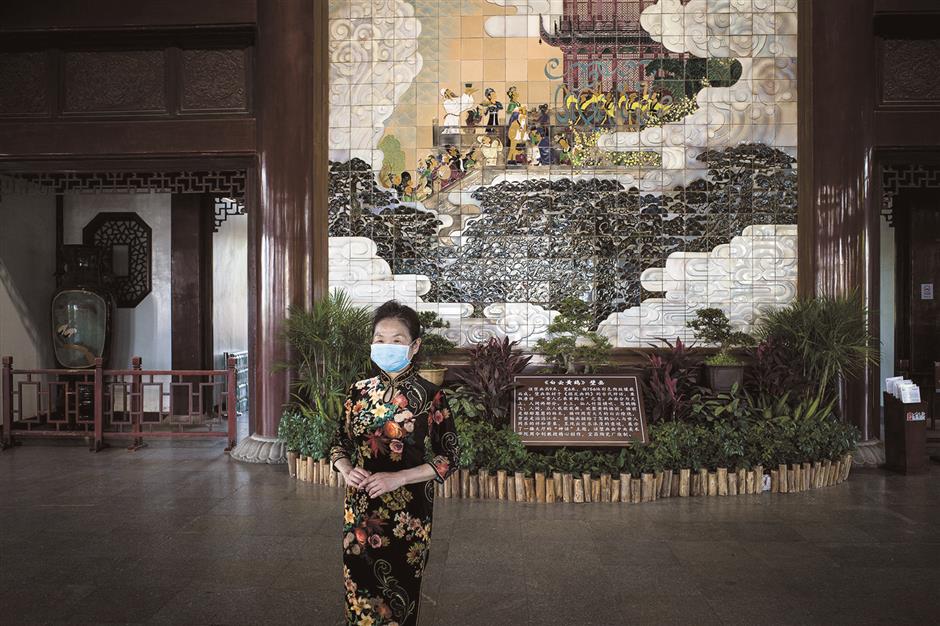 A visitor poses in the Yellow Crane Tower with her mask on. Strict anti-infection measures are still in force at public places in Wuhan.

After descending, Ye decided to grab a bite to eat in century-old Hubu Alley, a landmark snack area now reconstructed into a food street in Wuchang.

Before the epidemic outbreak, the alley was one of the busiest areas in the city, always packed with visitors. Many came to eat authentic guozao, or Wuhan breakfast.

“You always find comment on the Internet that Hubu Alley is just a tourist spot that locals don’t frequent, but that is actually not true,” Ye said. “Sometimes I went there with my friends after a movie or just to meet up. But yeah, I don’t have guozao there because the vibe changed after the area was reconstructed to be more of a street than an alley.”

The street is famous for local specialties like bean curd skin, duck neck, stinky tofu, fish balls and the famous reganmian, or hot dry noodles. It would be hard to find a Wuhan resident who hasn’t eaten bowls of the noodles, which are served with sauce of sesame paste, soy sauce and vinegar, and with spicy turnip pickles as topping.

The alley was often filled with the rich aroma of the sesame sauce, but not now. Ye walked along a half-empty street that only hinted at its bustling past.

Some of the snack shops have reopened, but most are still boarded up. Customers need to have temperature checks and show their green health code before entering a diner. Most choose takeaways instead.

“I have never seen Hubu Alley like this,” Ye said. “In that past, you always had to worry about being jostled by crowds and spilling your food.”

In the end, she chose somewhere else to have lunch.

“Maybe the crowds added extra flavor to the snacks,” she said. “I believe that we will be back to normal life eventually, and I hope it won’t take too long.” 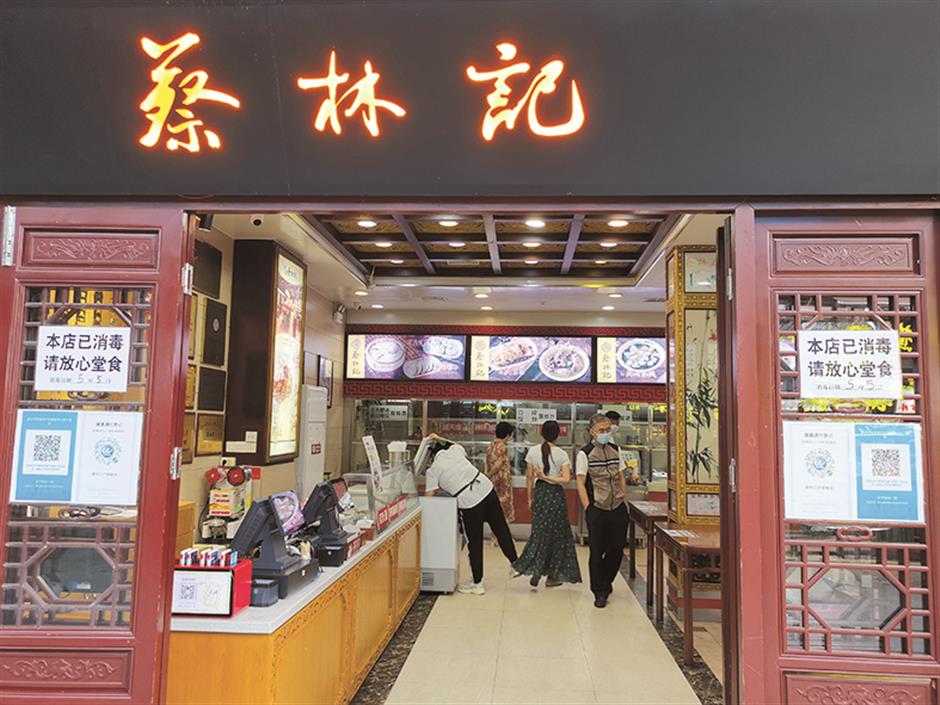 Cailinji, one of the most popular restaurants for hot dry noodles, does more takeaway business nowadays than dine-in service.

﻿
Special Reports
﻿
Getting back outdoors: an elixir and chance to do a bit of sightseeing
Now is the time to get out to enjoy life
Jade Mountain represents Taiwan's spiritual fortress
The power of 5 to boost visitor numbers in Songjiang
Visit the grand canyon in New Taipei City
Explore the most beautiful night sky in Taiwan
Lockdown in an exotic locale yields a natural world of biodiversity
The curious tale of a decaying old mansion forgotten by time
Wisteria in full bloom amid spring warmth
Taiwan's 'Little Greece' becomes popular attraction
EXPLORE SHINE