Island-hopping among natural wonders in Taiwan 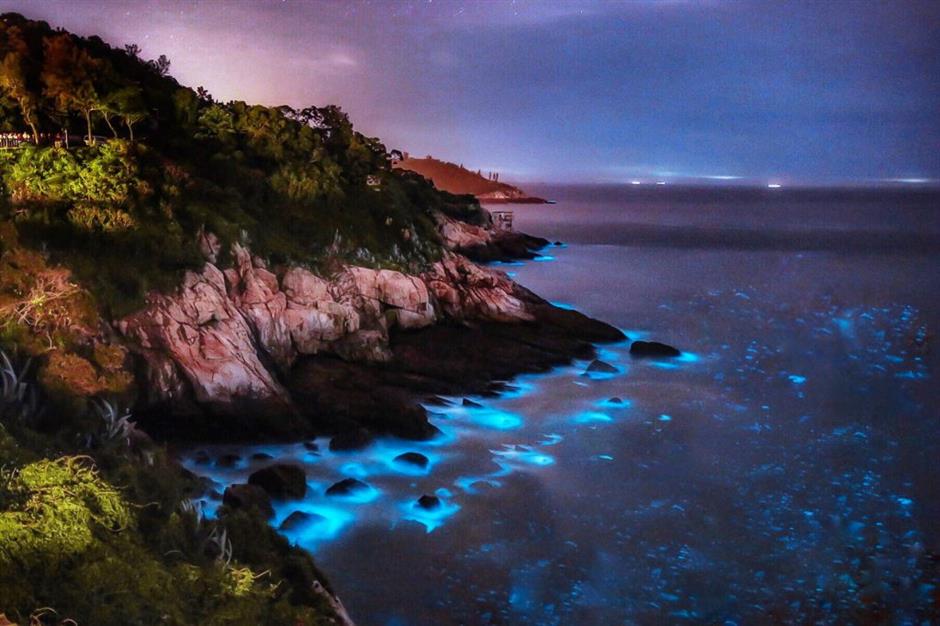 Located on the northwest of the Taiwan Strait, the Matsu Islands' architecture is distinct from the rest of Taiwan.

This “string of pearls” floating in the Pacific, comprised of seaside mountain towns, has earned its reputation as Taiwan’s “Little Greece.”

When talking about this island chain, it’s impossible not to mention the Blue Tears, which is hailed as one of the world’s “15 natural wonders.”

Mainly blooming during peak season between March-September and April-June, the special nocturnal algae on the sea’s surface emits a magical azure glow when stimulated, creating an unforgettable dream-like landscape of “blue tears.”

The island of Matsu is composed of dozens of islands and four townships, of which Nangan is the largest island and its political and economic center.

Accommodation in Nangan is relatively convenient, and island-hopping by boat is easy. There are two ways to reach the Matsu Islands: either an 8-hour or so boat ride from Keelung city, or the faster way, flying from the international airports of Songshan or Taichung (40-50 minutes).

Nangan Island spans 10.64 square kilometers. Although it can be toured in just one afternoon by motorbike, it contains the most well-preserved traditional stone houses, vast mountain views and breathtaking blue sea.

Planning a three-day-and-two-night tour from Nangan to Beigan makes for an ideal trip.

Zooming on a scooter, the first stop is Beihai Tunnel, a 700-meter-long subterranean waterway surrounded by rock wall glowing in yellow light, and a row of parked oar boats. It’s as if you were entering an entirely different world.

Rewinding 50 years into the past, many underground docks had been built here to house guerrilla warships, but now it’s become a unique attraction, as well as one of the best spots to enjoy the Blue Tears.

Under a night sky unperturbed by any light, the Beihai tunnel transforms into a fantastical sea of sapphire, a phenomenon similar to that seen in the film “Life of Pi,” with idyllic shimmering water. 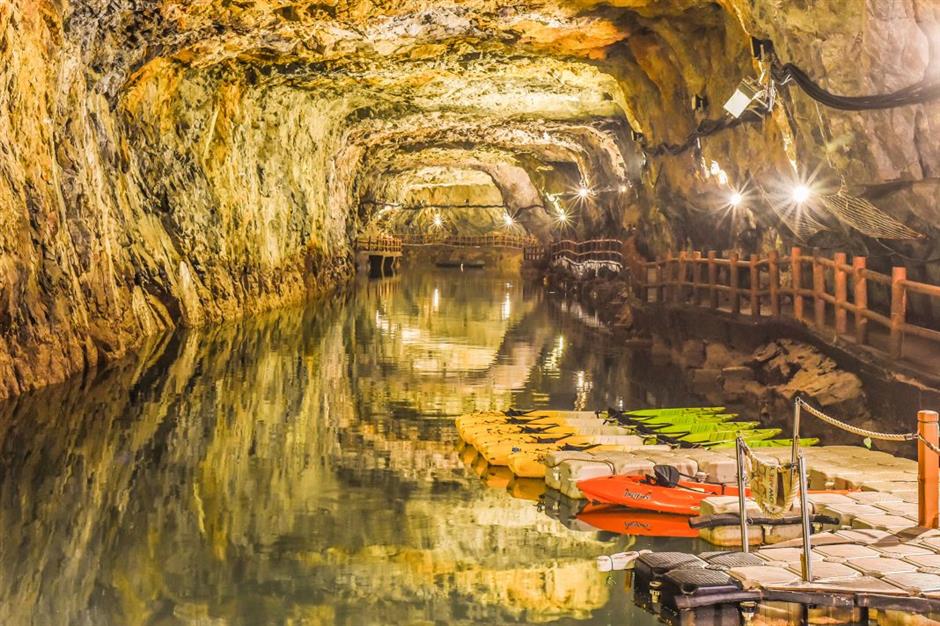 From March to November, tourists can ride an oar boat into the Beihai Tunnel and uncover the Blue Tears. Yuntai Mountain, the highest peak on the island, is listed as one of the “100 Peaks of Taiwan.” It has an excellent summit view and is the best place to watch sunset on the Matsu Islands.

After visiting these historic tunnels, the sun begins to set as the breeze picks up, perfect for mountain hiking with cool weather.

The 248-meter-high Yuntai Mountain is Nangan’s highest peak, equipped with an observation platform where visitors can see an unrivaled 180-degree view of the ocean, other islands and even Beijiao Peninsula.

In the evening, a stroll on the beach near Nangan’s Jinsha Tribe and the most beautiful sunsets will sweep away any worries or anxiety left from urban life.

The Jinsha tribe still retains Matsu’s traditional Eastern Min architecture, but unlike Beigan’s Qinbi Tribe, its state is relatively bleak, with vines having grown deep into the stone cracks.

Exploring these mysterious ruins is an adventurous treat.

As day becomes night, visitors can stay at No. 55 Hostel, renovated from former military barracks. After unloading the luggage, walk back outside to watch the Blue Tears on the hostel’s private observation deck under the starry sky and take in such an unforgettably marvelous scenery. 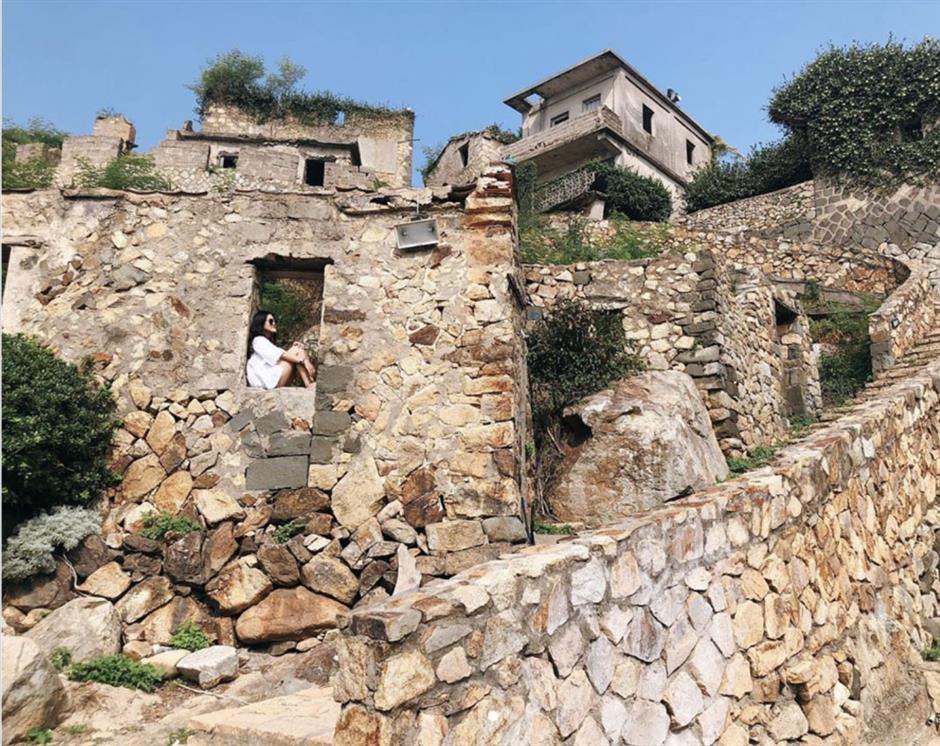 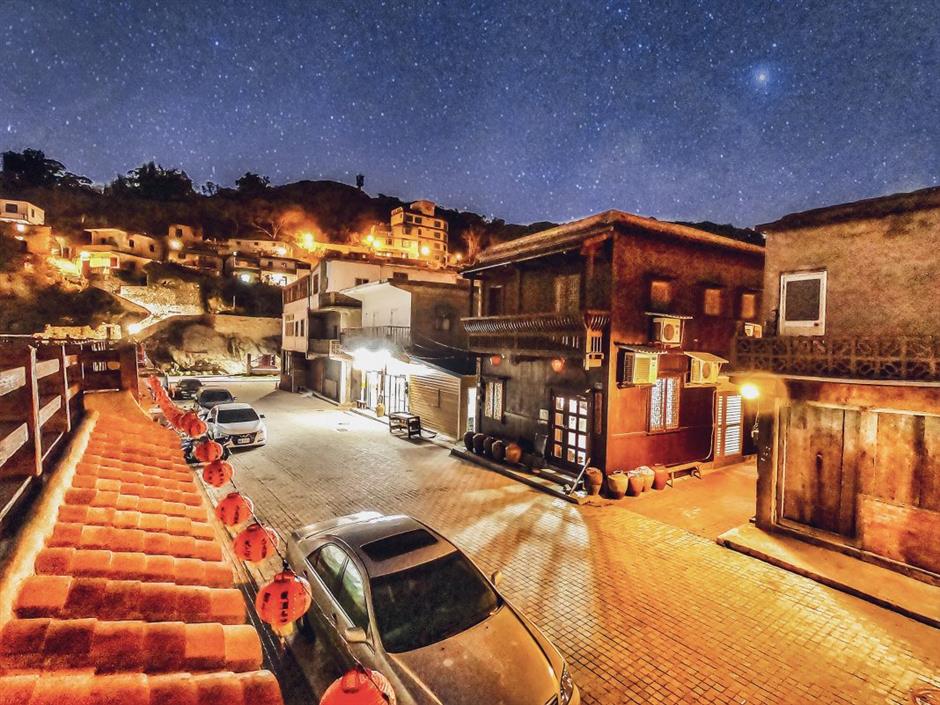 Night falls and the Nangan Jinsha Tribe turns on its warm lantern lights, where one can take a romantic stroll under the starry sky.

On the next day, take a boat that leaves Fuao Port for Beigan Township every two hours by purchasing a full-trip ticket (NT$160/US$5). After just a 10-minute ride, visitors will reach the Qinbi Tribe, one of Beigan’s must-visit spots.

Known as the Matsu’s “Mediterranean town,” it currently possesses the largest and most complete settlement of Eastern Min traditional architecture, whose old town leans upward against the mountain, facing the ocean.

Come here for a cup of coffee and brunch to soak in this exotic, Mediterranean-like atmosphere. Spending the entire day here shouldn’t be a problem at all. 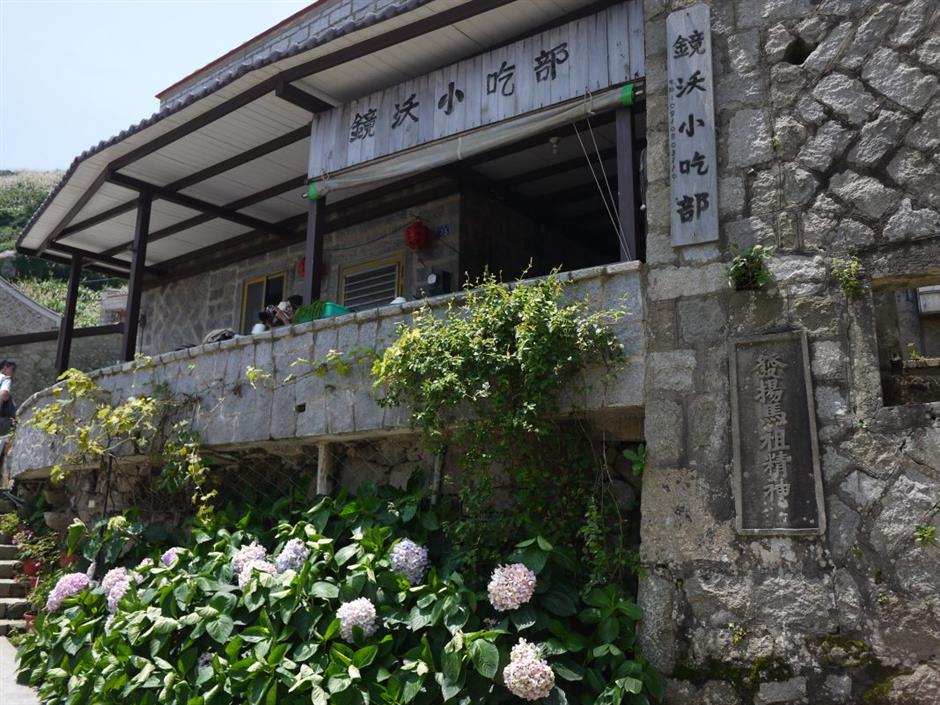 The old wine vermicelli noodles served at Jinwo Xiaochibu is a must-try.

At the Qinbi Tribe, an authentic taste of the old wine vermicelli noodles at Jinwo Xiaochibu, a local snack bar, is highly recommended.

The alcoholic aroma emanating from this rich soup, with a slightly charred, crispy fried poached egg on top, makes for a perfect soul food.

Also, take a bite of the sweet potato dumplings wrapped with peanuts, sesame seeds and sweet powder, accompanied by a clear soup — a meal traditionally eaten during the Lantern Festival. The flavor is sweet but not greasy.

Just choose a spot facing the sea, lay back and enjoy the food as well as the ocean — just enjoy the moment! 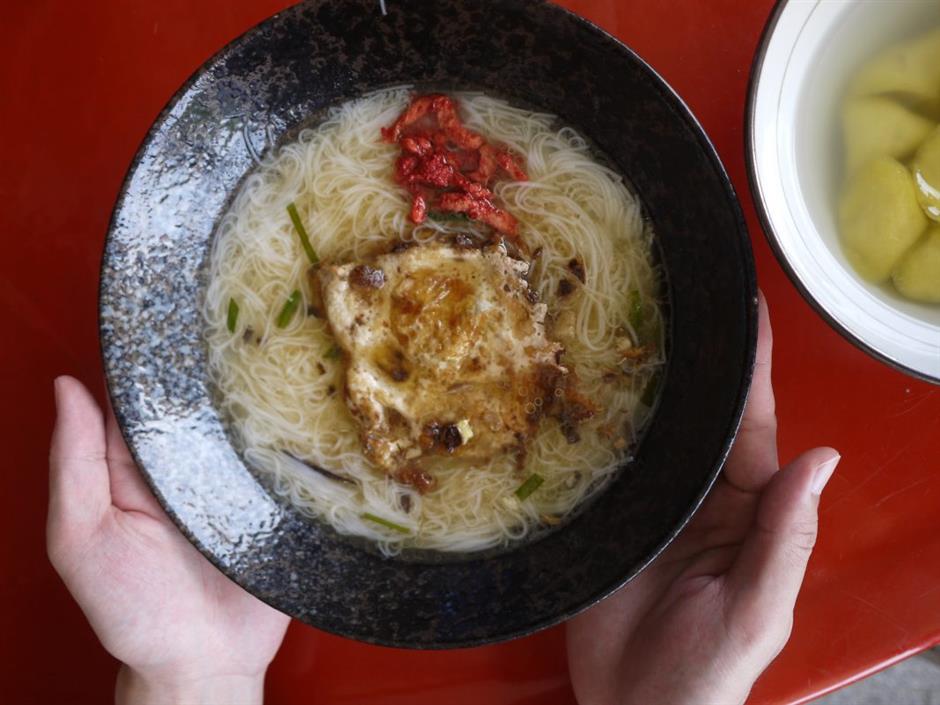 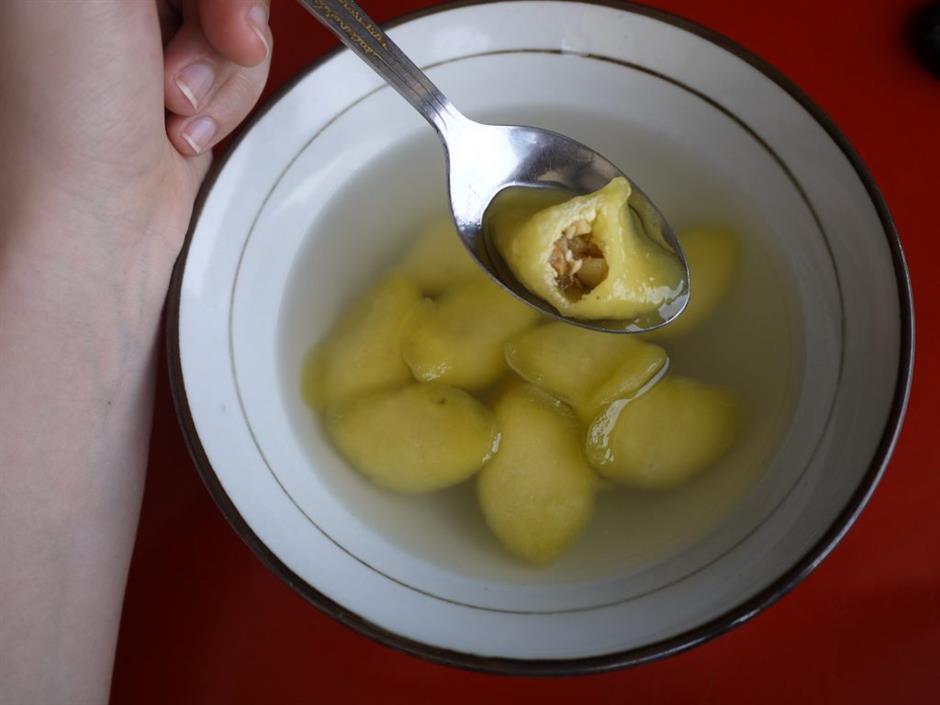 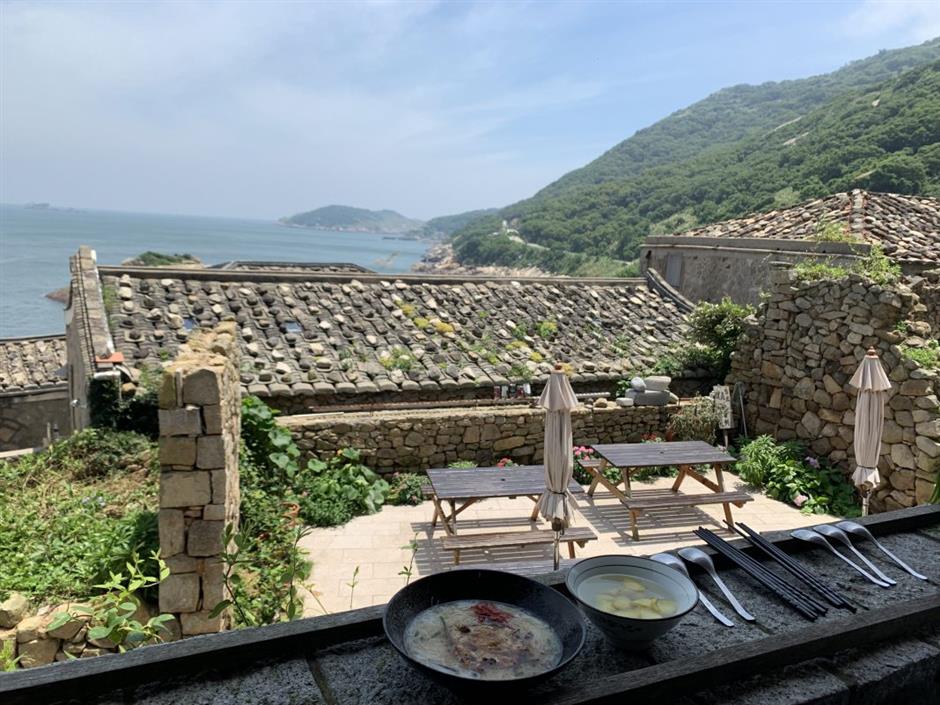 Enjoy delicious food with an unmatchable view of the ocean at Jinwo Xiaochibu.

﻿
Special Reports
﻿
Beds empty, small innkeepers turn to stop-gap measures
Island-hopping among natural wonders in Taiwan
Little Liuqiu has it all: A dive into coral reefs and luscious seafood
Desert kingdom of contradictions is opening up tourism
Getting back outdoors: an elixir and chance to do a bit of sightseeing
Now is the time to get out to enjoy life
Jade Mountain represents Taiwan's spiritual fortress
The power of 5 to boost visitor numbers in Songjiang
Visit the grand canyon in New Taipei City
Explore the most beautiful night sky in Taiwan
EXPLORE SHINE