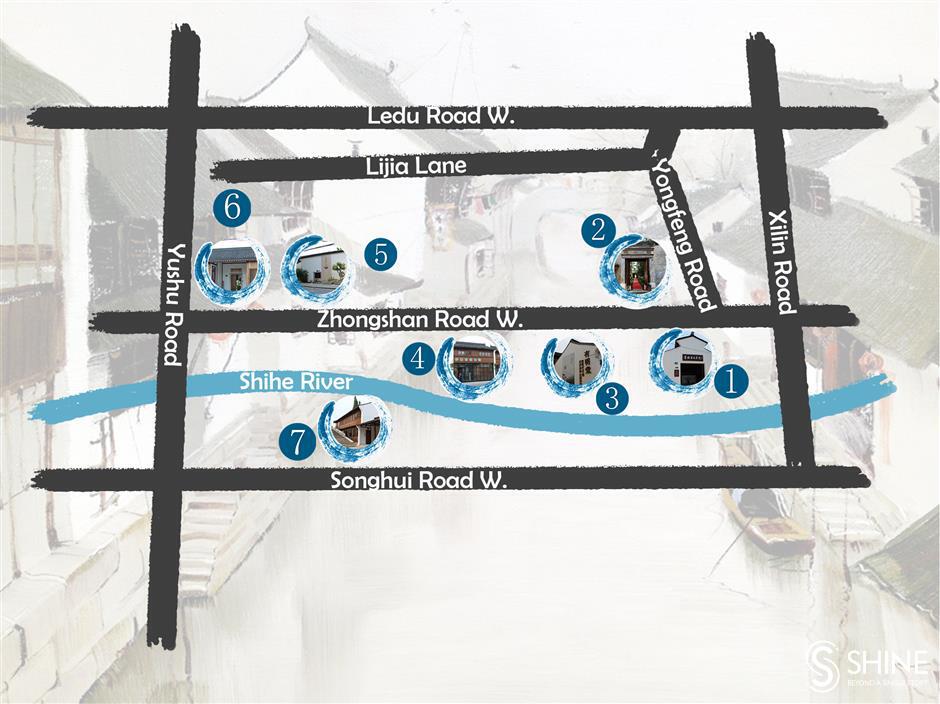 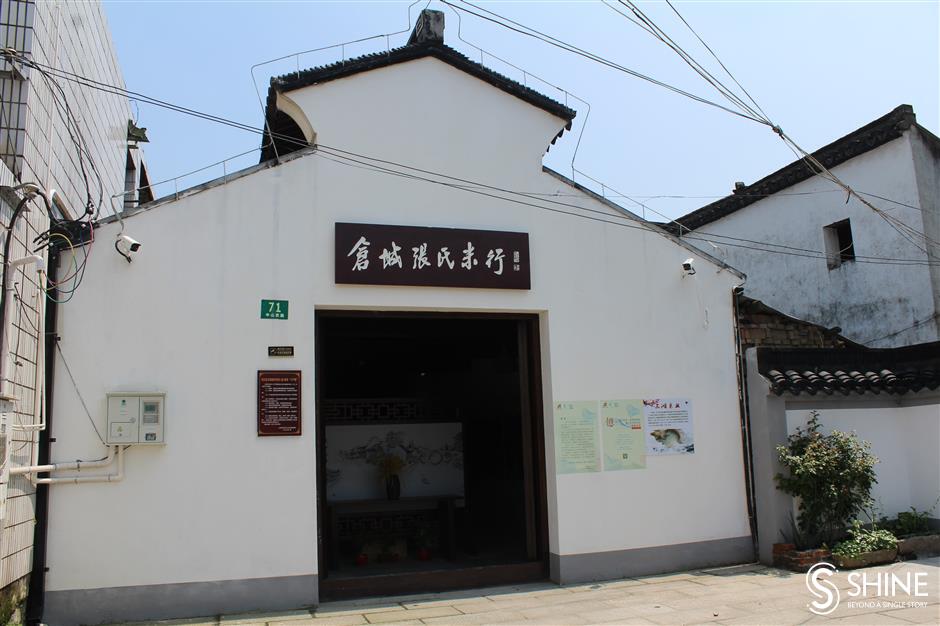 In 1433 a grain store rose from the ground at the southern end of Dacang Bridge that crossed Songjiang’s ancient Shihe River. Henceforward, the place, or Cangcheng, became the region’s biggest rice-storing spot and the starting point for the water transport of grain to the capital city in feudal times. Rice, cotton textile and other industries flourished amid the hustle and bustle of the water transport of grain. City walls were erected to protect the area from invaders who coveted its wealth.

More than 500 years later, the walls of Cangcheng have vanished due to wind erosion, wars and the vicissitudes of time, but its old bridges, the gurgling Shihe River and rows of ancient buildings along the river banks remain to remind people of the old days.

“Nostalgia about your hometown is triggered when you leave the place and you think about it,” wrote President Xi Jinping. “Therefore we should protect the resources of our hometown, the origin of our nostalgic feelings.”

Starting in October 2005, the Shanghai government launched a renovation program for historic zones in several districts, and Cangcheng Old City in Songjiang was included.

The area, under the jurisdiction of the Yongfeng Community authority, covers an area of 66 hectares and is to the north of the Shanghai-Hangzhou Railway, south of Ledu Road W., east of Canghui Road and west of Xilin Road. Its key protected zone, including areas to the east of Yushu Road, west of Huangqiang River, along the Shihe River banks and on both sides of Zhongshan Road W., covers 19.5 hectares.

The number of Cangcheng’s city- and district-level cultural relics preservation units and its registered cultural relics that can not be removed from the town amounts to 127, making the area a “living fossil” of Songjiang culture. So far, renovation work has been completed on 25 old residences and relics in the area, and three of them — Zhang Family Grain Store Museum, Songjiang Cloth Art Gallery and Zhang Ming Art Gallery — have been open to the public since early June, according to statistics from Cangcheng Old City Development Office. 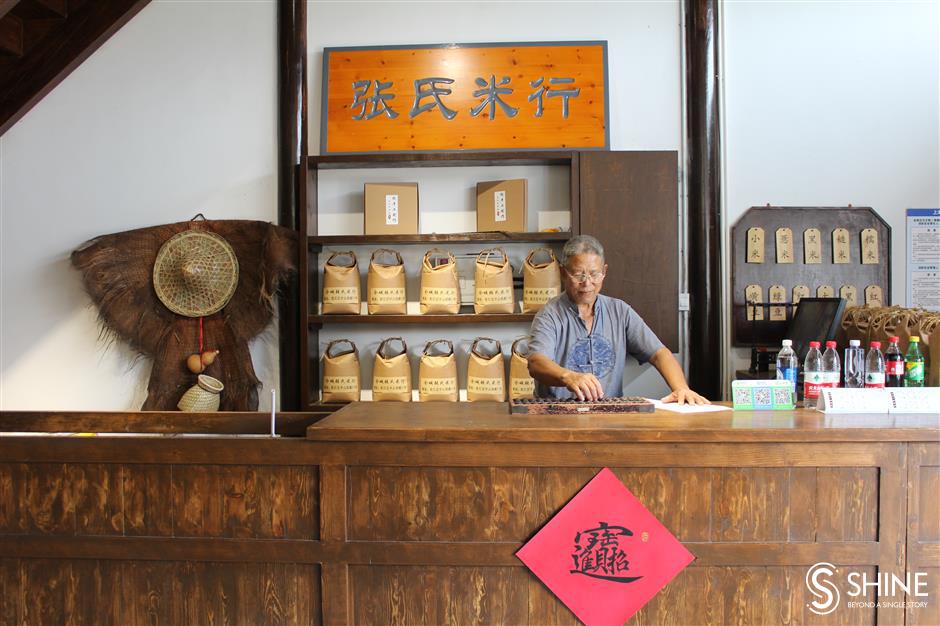 Mo Guanguo, a Chongqing native in his 60s, simulates an ancient-time grain store clerk making calculations on an abacus.

Mo Guanguo, a Chongqing native in his 60s, is a staffer at the newly opened Zhang Family Grain Store Museum in Cangcheng Old City. Wearing an indigo mandarin jacket that fits the environment well, Mo welcomes visitors warmly with his southwestern China-accented putonghua.

As he ushers visitors in, he goes to the back of a counter and simulates an ancient-time grain store clerk making calculations on an abacus. The clashing notes of the abacus beads knocking against each other reverberate through the space of the grain store museum and add fun to a visitor’s experience.

“How comes it is that you role-play a grain store clerk here,” someone asks Mo.

“I am helping my daughter. She runs the museum,” he says, his face beaming.

Brimming with this simple fatherly love, the grain store museum opened on June 9 after a facelift, giving visitors a glimpse into the past when water transportation prospered in the region and grain stores thrived.

“The place is the old residence of the Zhang family who ran a grain store in the Republic of China period (1912-1949). The district government gave the residence a facelift in recent years and I took charge of it as its manager and curator to promote the rice culture of the region,” she said.

As its opening event, a rice culture exhibition is underway at the museum. Utensils used to weigh, process, cook and store rice are displayed and the history of Songjiang’s water transport is illustrated. 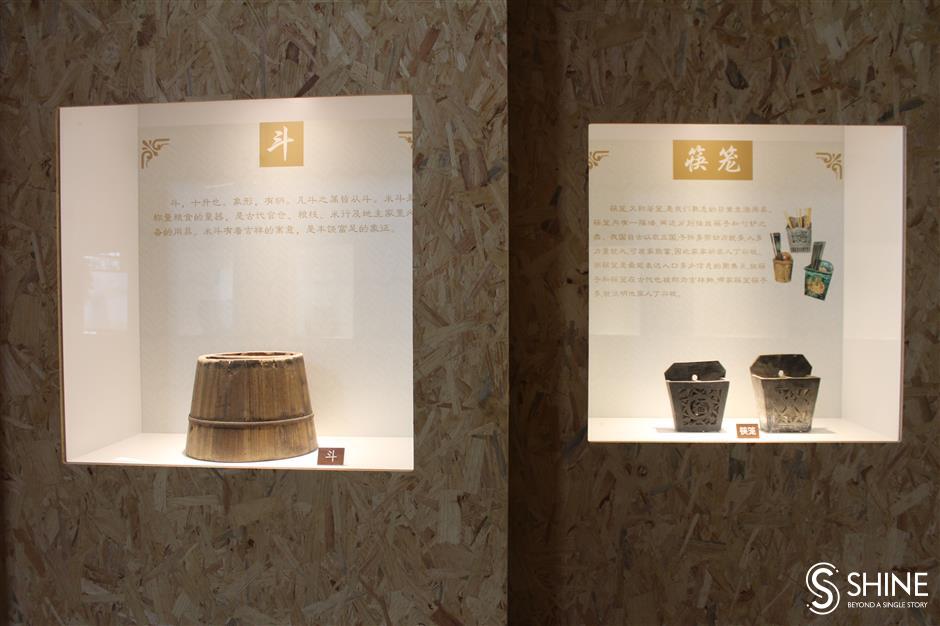 Utensils used to store and weigh rice are displayed at the Zhang Family Grain Store Museum. The museum also exhibits ancient receipts used in the water transport of grain.

The exhibition also showcases all kinds of traditional Chinese grains, as well as Songjiang’s local specialties, including Guangli zongzi (a pyramid-shaped dumpling made of glutinous rice and wrapped in reed leaves), rice wine and rice cakes. 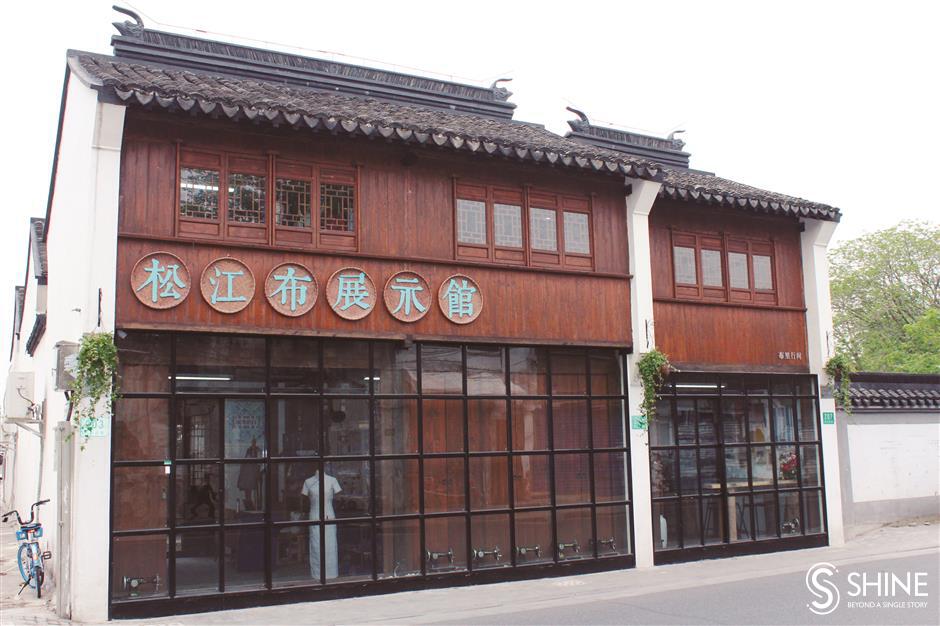 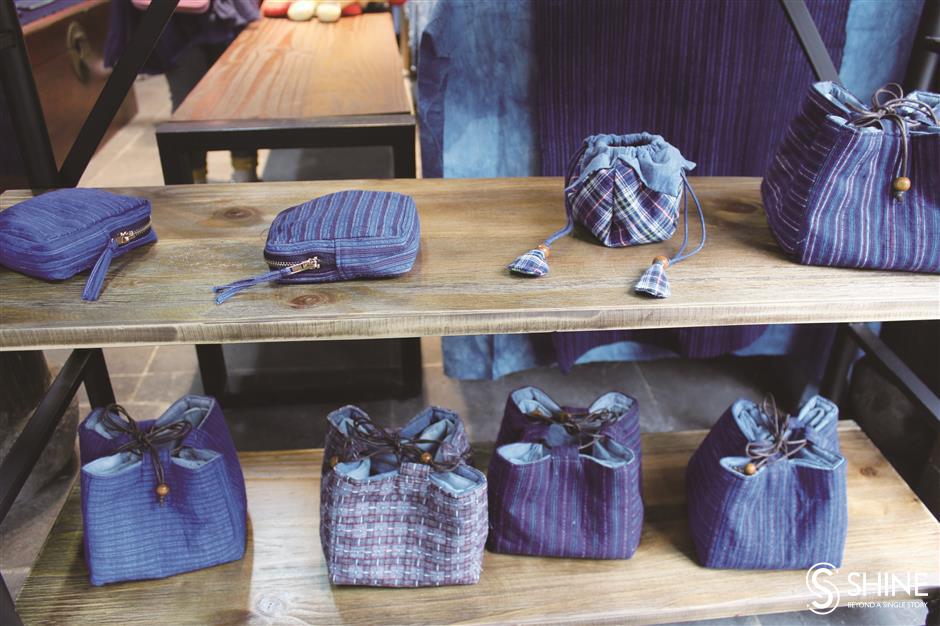 At the Songjiang Art Cloth Museum, visitors can learn about the local cloth culture, as well as purchase clothes, purses and bags made of old Songjiang cotton cloth.

A few blocks away from the Zhang Family Grain Store Museum is the Songjiang Cloth Art Gallery. The gallery has been open to the public since June 8.

Dappled sunshine penetrates through windows and falls into the old residence where items such as old Songjiang cotton cloth, three-spindle spinning wheels and hand-cranking spinning machines are displayed to remind people of a past when rural domestic textile workshops flourished in the region.

Now and then passersby stop to peek into the newly renovated residence.

“We two grew up on this street; Zhongshan Road used to be the city center of Songjiang. It had a developed commerce, with flows of people walking to and fro daily,” says a pair of elderly sisters in their 70s.

Inside the gallery a tailor surnamed Zhang in his 60s is drawing cloth patterns and doing skilful needlework.

“I started to work at a clothing factory at the age of 18. And after working as a tailor for quite a few years, I have become obsessed with the trade,” said Zhang, for whom scissors, rulers and sewing machines are like lifelong companions.

The old Songjiang cotton cloths, through Zhang’s craft, are transformed into vests and hats that contain both vintage and modern styles. At another workshop in the gallery, Fang Yuehong, a Songjiang native in her 60s, is showing visitors how to operate a weaving loom.

“I am the oldest sister in my family and I taught myself how to spin and weave. I was a quick worker when I was young. I could weave 16-meter-long cloths daily,” said Fang.

During her childhood, old cotton cloths were the most common and economic fabric in rural Songjiang and generations of rural residents spun and wove cloths by themselves, according to Fang.

About 10 years ago, Yang Panhong, owner of the gallery, and her family members started to collect old Songjiang cotton cloth. They traveled to the district’s Xinbang, Sijing and Xiaokunshan towns and collected tens of thousands of rolls of old Songjiang cotton cloth. It occurred to them that they could establish a cloth art gallery and share the culture while recording its history and improving it as an iconic symbol.

“Handmade Songjiang cotton cloths are loaded with the daily wisdom of local ordinary people. They are rich in texture and feel tender,” said Yang. 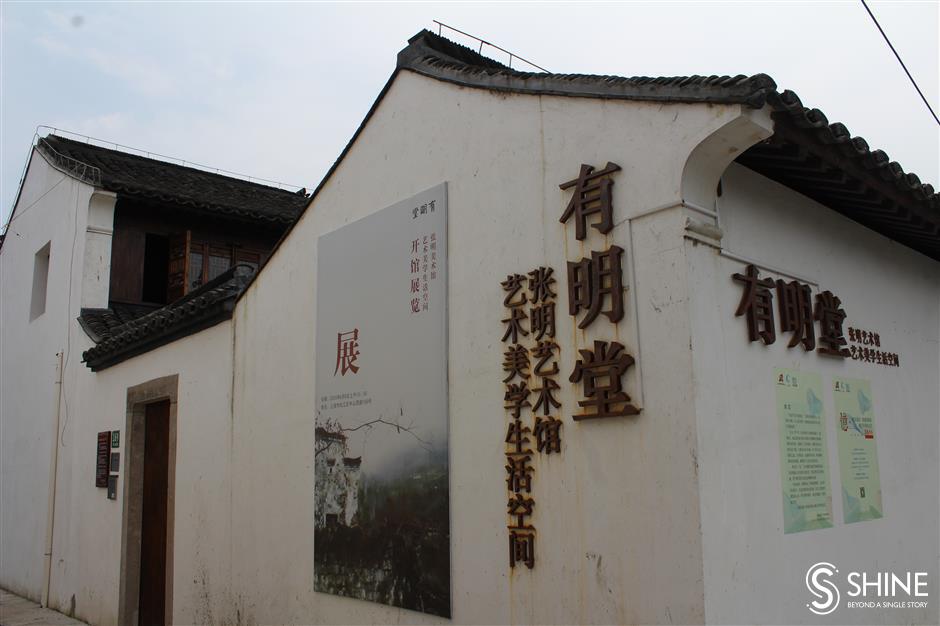 A three-courtyard residence that dates back to the Ming Dynasty (1368-1644) along Zhongshan Road W. is painted white on the exterior. The site, set against the blue sky and having black roof tiles and timber structures, looks like an ink-wash painting done in simple strokes and undertints.

The residence now houses the Zhang Ming Art Gallery and its owner, Zhang Ming, a renowned painter and professor at the Shanghai Institute of Visual Art, says he intends the art space to “expose visitors to good art and its beauty in every possible way.” 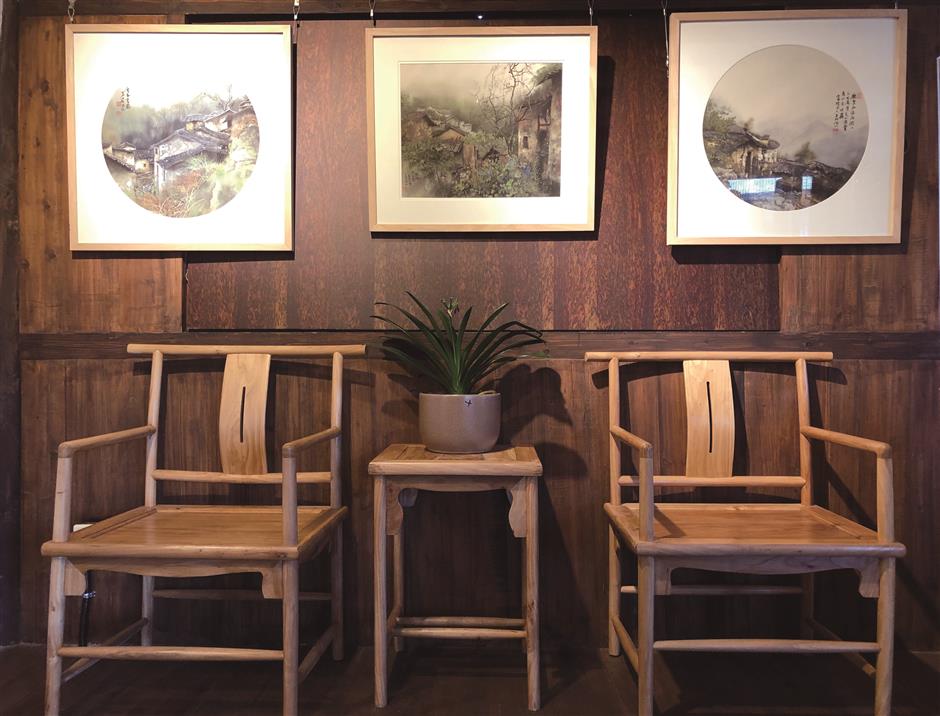 Zhang, a native of Suzhou in neighboring Jiangsu Province in his early 60s, says his link with fine art was formed naturally as he cultivated his skills first as an art student and then proceeded to hone his craft as a painter and an art teacher.

“Some visitors who paid visits to my gallery said my paintings reminded them of their childhood. I guess that’s because old buildings and towns are a common subject in my paintings,” said Zhang, who is a representative artist of the new Wu school of painting and once won a bronze prize at the Chinese National Fine Arts Exhibition.

Zhang points out the reason why he set up his gallery: “Songjiang has a rich art culture, which, led by ancient local artist Dong Qichang (1555-1636), flourished during the Ming and Qing (1644-1911) dynasties. In the modern era, the district is also famous for its calligraphy society. Artists, men of letters and even entrepreneurs in the area practice calligraphy very diligently and have won the district multiple awards nationwide.

“And I hope I can be one of the artists who inherit Songjiang’s culture and keep on promoting it,” Zhang added.

The art gallery is decorated with Zhang’s artworks and derivatives in a variety of forms including paintings, porcelain items, screens, silk scarves and fans, which, Zhang hopes, can delight people with their beauty.

It now has functions including a tea house, an activity room, an exhibition room, the painter’s studio and a staff office. 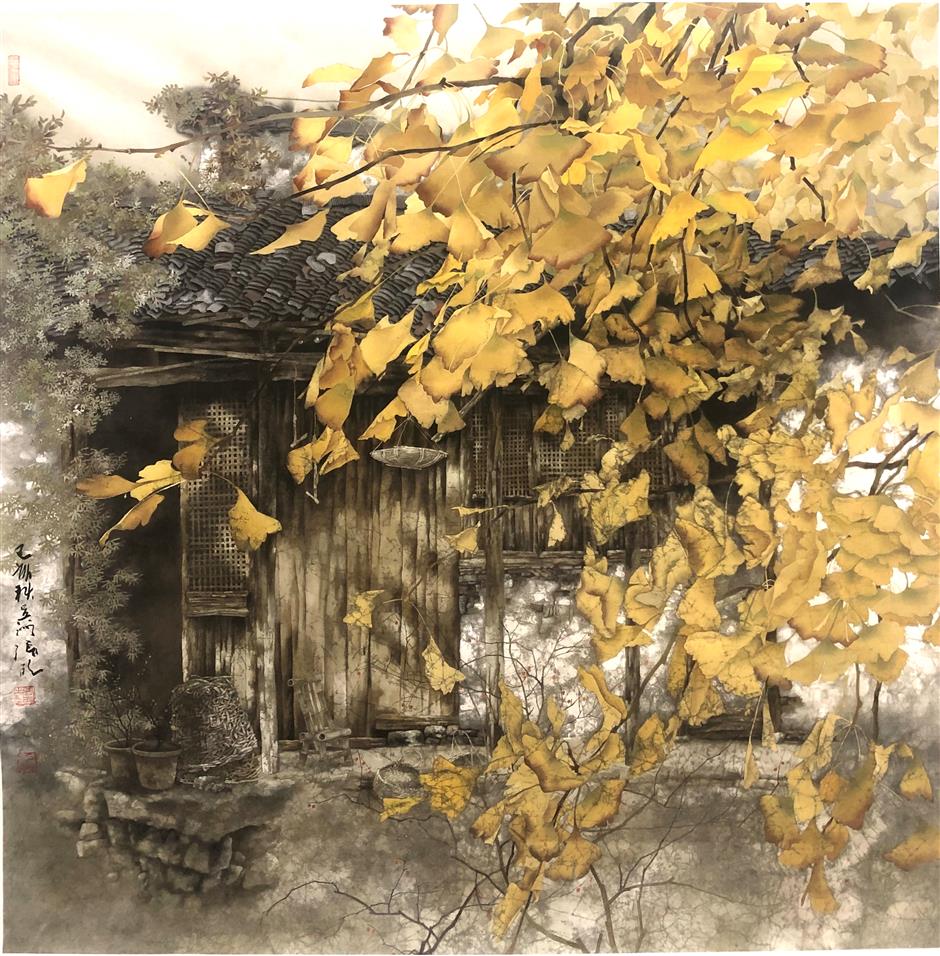 Among Zhang’s works, ginkgo trees are a repeated subject favored by the artist.

“I love the connotation behind a ginkgo tree. It’s autumn when flowers and greening start to wilt when the ginkgo trees with dazzling golden color are at their peak,” he said.

In addition to the three residences that are now in full operation, four old residences, including Yi Yun Ge, Xu’s Pawnshop, Yi Ming Xuan and the Du Family Old Residence, are temporarily or have been temporarily open to the public while holding a series of exhibitions that include painting and calligraphy, clay teapots and stamps.

Special Reports
ADVERTISEMENT
61771
,
Back to the past in Cangcheng with its old residences and bridges
Raise a glass to a lady who knows her beer
Look familiar? A town on the Yangtze that has hints of Shanghai
A bike, a dream and gritty resolve. The odyssey begins
No need to travel far. Great outings are found in our own backyard
Wander among #Instaworthy spots in Penghu
On a tropical island wonderland, tourists on beaches gaze skyward
A festival of color blossoms on Wushan Hill
Beds empty, small innkeepers turn to stop-gap measures
Island-hopping among natural wonders in Taiwan
EXPLORE SHINE