There is Old Shanghai and then there is much older Shanghai. That latter honor describes Zhenru, an area in the west of the city that has just celebrated its 700th birthday.

Zhenru lies in Putuo District near the border with Jiading District. Putuo is not traditionally favored by Shanghai locals as a place to visit because it seems less developed and less vibrant than other downtown districts.

But the role Zhenru plays in Shanghai’s history is hardly shabby. It once had one of the oldest railway stations in the city — the Shanghai West Railway Station, or Zhenru Station — and hosted the city’s largest seafood market, known as a “holy land” for local foodies.

“You basically don’t feel that you are living in an area that old,” says Chris Ma, a 35-year-old Zhenru native, who moved out of the area just three years ago. “Then again, you don’t feel it was developing rapidly like Pudong or Jing’an either. It is just a place for everyday life, and maybe that is its real charm.”

Zhenru is home to the only Buddhist temple in Shanghai that was built during the Yuan Dynasty (1271-1368).

According to records, a monk named Miaoxin moved a group of monks to today’s Putuo in 1320 and built a temple on a piece of land near the Taopu River. He named the temple Zhenru, which means “true and lasting” in Buddhism. 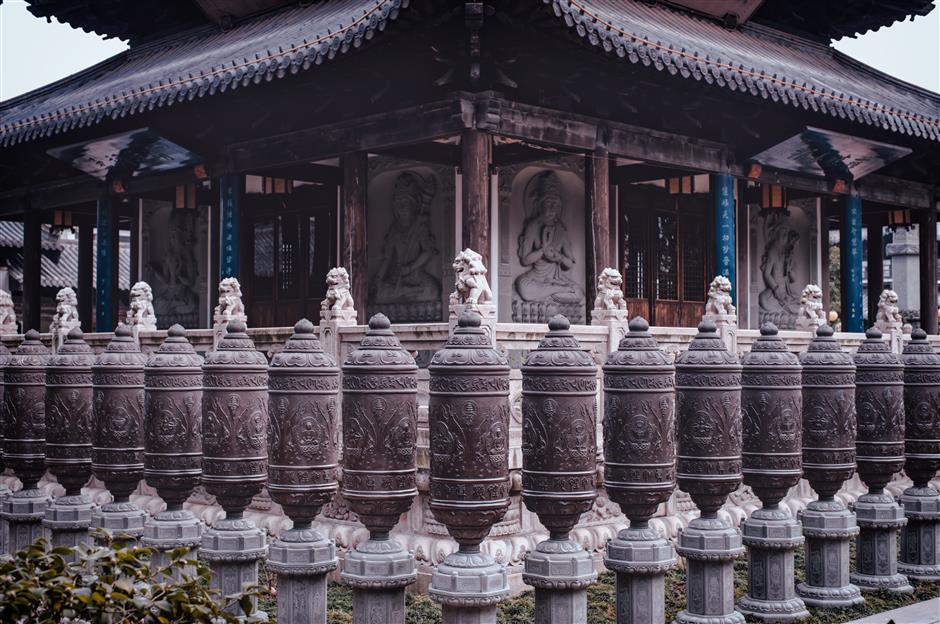 The temple quickly became popular among nearby residents and set up a temple fair out front. After several expansions, the temple was nicknamed Damiao, or Big Temple, because of its magnificence.

Meanwhile, the temple fair gradually grew into a larger market, and the town around it adopted the name of the temple as its own.

Though it was destroyed several times, the temple weathered adversity and still stands today. In 1860, the temple was almost completely burned to the ground during the Taiping Rebellion from 1850 to 1864. Only the main hall survived.

Three decades later, the temple was again restored. Fortunately, the original beams, columns and brackets of the main hall were well preserved. Today, the temple has the oldest timber building in Shanghai.

Unlike most other Buddhist temples in China, the temple’s main color scheme is black and white instead of the usual bright yellow.

It is believed that the designer of the temple was deeply influenced by Hui-style buildings, which are mostly seen in part of today’s Anhui and Jiangxi provinces.

A gingko tree of more than 700 years old stands in the temple, living testament to the area’s history.

“The temple is beautiful, but it doesn’t have as many visitors as other old temples in the city,” Ma says. “Its visitors are the more elderly.”

It’s strange that Zhenru was never developed into a typical “ancient town” like Qibao in Minhang District or Zhujiajiao in Qingpu District. The local government did try. A signboard saying “Zhenru Ancient Town” was placed in an archway there, but somehow the idea never caught on.

That’s probably just as well. An authentic old construction has survived rather than being tarted up with pseudo-ancient restoration. The temple also doesn’t have popular legends behind it to draw visitors. This area remains vintage Shanghai without the frills.

That doesn’t detract from Zhenru’s charm. Some older Shanghai residents visit the temple three times a year. Once to burn joss sticks on Chinese New Year, once to enjoy local mutton dishes in the summer, and once to view the wintersweet blossoms in winter.

With a history of more than 200 years, mutton cuisine in Zhenru is the top summer treat for locals. Zhenru annuals tell us local farmers of old would “go to mutton houses every day about 4:30am and order a plate of mutton and some liquor. Then after a bowl of mutton noodle soup, a day’s farm work begins.”

The old street at its peak had more than 30 mutton houses, but the number dropped to six before the establishment of People’s Republic in 1949. In 1958, the six remaining eateries merged into one, which is the current Zhenru Mutton House in front of the temple.

Mutton is usually cooked in one of two ways here. Either it is boiled in water or braised in sauce. Both are easier said than done. A seasoned mutton cook knows from the first bite which part of the goat the meat comes from.

Cooking mutton is not only about heat control, but also the “old mutton soup” the mutton is cooked in. In the Zhenru Mutton House, only those who are “inheritors” of the old tradition can tend to the sauce. Its recipe has been zealously guarded for nearly 100 years. Even long-term employees at the restaurant don’t know the name of the “inheritor” nor the secret of the sauce.

The “inheritor” comes to the house with the sauce every evening and works until the next morning to prepare for the next day’s meals, before taking the sauce home with him to avoid any tampering.

But to Ma, the former Tongchuan Seafood Market was even more attractive than the mutton. In fact, the closure of the market in 2016 was Ma’s biggest disappointment. At more than 120,000 square meters, it was the largest of its kind in the city.

Opened in 1996, Tongchuan was not only a wholesale market but also a food street, where rows of small seafood shops existed. Customers could select their favorite seafood and ask the shop to steam or stir-fry their choice. Voilà! A fresh seafood meal.

“I had the best crabs and shrimp there — best!” Ma says, with emphasis. “I lived not far from the market, and it was a favorite spot for dinner parties with friends. People would come all the way from Pudong to enjoy what we called a ‘gout meal.’ You know, seafood and beer don’t agree with your health very much.”

A vendor was packing seafood at the Tongchuan Seafood Market before the “holy land” for local foodies was closed in 2016.

The 20-year-old “seafood holy land” was closed for various reasons. Its environment was somewhat unhygienic, and the noise at night annoyed nearby residents. The vendors who once worked there scattered to other markets of the city, but so far, no market has quite gained the stature that Tongchuan Market once enjoyed.

The demolition of the market took three years. The vacated land is slated to become a new “sub-center” of the city, with more services to the vast residential complexes of Zhenru.

“Although I have moved away, I still consider Zhenru my home,” Ma says. “I am anxious to see how it will be redeveloped.”

Special Reports
ADVERTISEMENT
Little-visited, centuries-old nook manages to retain a certain charm
Hangzhou's free tea a cool idea for summer
Changbin Market: a place for more than just food
Hangzhou attractions make latest 4A list
Taiwan's 'Little Shanghai' revives thanks to surging tourists
Back to the past in Cangcheng with its old residences and bridges
Raise a glass to a lady who knows her beer
Look familiar? A town on the Yangtze that has hints of Shanghai
A bike, a dream and gritty resolve. The odyssey begins
No need to travel far. Great outings are found in our own backyard
EXPLORE SHINE