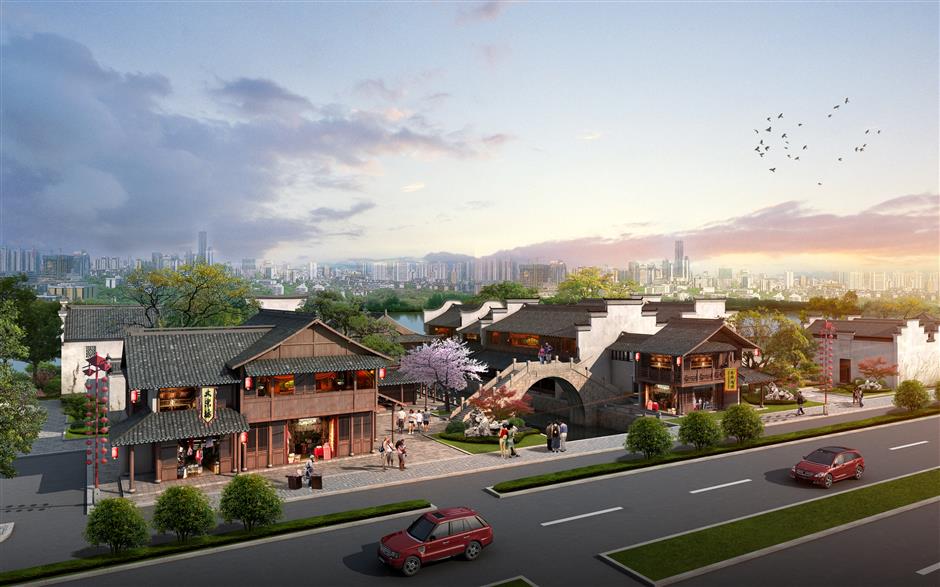 The artist’s rendition of Yiqiao Street renovation project shows that old buildings will be given a facelift with white walls, black roofs and red lanterns.

Some of Hangzhou’s old neighborhoods have been successfully restored and are now scenic attractions for tourists. Qiaoxizhi Street and Xiaohezhi Street along the Grand Canal, for example, have been renovated, and a variety of businesses in the area have prospered.

Yiqiao Street next to the Xinkai River, a branch of the Grand Canal, however, has many buildings which have fallen into disrepair. To rejuvenate the street and enhance the cultural vibe along the canal, Gongshu District government and Hangzhou Grand Canal Group are now jointly renovating the street.

This area has many ancient black-tiled houses with upturned eaves and carved beams which are characteristic of the region. Many residents along the street have opened small teahouses, noodle restaurants or mahjong rooms in their homes.

The renovation project is expected to cover an area of 7,000 square meters. Old buildings will be given a facelift with white walls, black roofs and red lanterns. It is hoped to be a hip new hangout for tourists after the completion at the end of October.

The facelift is underway along Yiqiao Street. The area has many black-tiled houses with up turned eaves and carved beams after the renovation.

The Grand Canal from Beijing to Hangzhou is the longest artificial river in the world, stretching 1,776 kilometers. The 20-kilometer Hangzhou section features historic blocks, as they prospered near the piers along the canal in ancient times.

Since 2007, renovation projects have restored buildings, parks, promenades, temples, bridges and other structures along the canal. Formerly, these old streets were dilapidated, crowded and dirty, but the renewals have improved living conditions and added amenities while retaining the historic ambiance.