In garden of an ancient romance, lovers didn't live happily ever after

Ancient scholars especially favored the Yangtze River Delta region, where they could be surrounded by cultured and talented courtesans.

One of the best-known of these love tales took place in Rugao, a small city administered by Nantong in the neighboring province of Jiangsu. It’s only a two-hour trip on the Shanghai-Suzhou-Nantong Railway.

The legacy of the lovers Mao Pijiang and Dong Xiaowan, who lived in the late Ming Dynasty (1368-1644), remains in the city. Visitors can view Shuihui Garden, their “love nest” and one of a very few Huizhou-style gardens left in China.

Though the garden is now ringed by urban concrete structures, it stands a world apart. 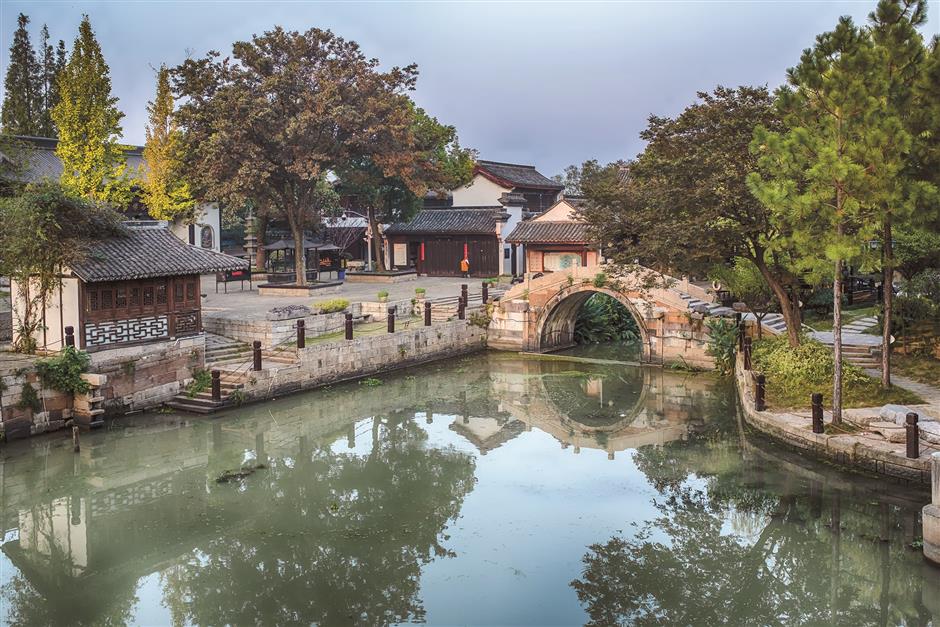 Shuihui Garden in Rugao was home to Mao Pijiang and Dong Xiaowan, a pair of lovers in the Ming Dynasty whose romance has endured in popular imagination.

It is famous for abundant water flowing through the whole garden, making it unique among Chinese gardens, especially the Suzhou-style ones that have prevailed in Jiangsu for centuries.

The garden was built by Mao Yiguan in the Ming Dynasty and rebuilt by his great grandson Mao Pijiang during the Qing Dynasty (1644-1911). When it was first built, the garden abutted an old city wall, now long gone. The scene was especially beautiful after winter snow turned the wall white.

Despite his horticultural legacy, Mao Pijiang’s concubine Dong Xiaowan is much more talked about than him.

She worked in a brothel on the banks of the Qinhuai River in Nanjing, then the busiest and most voluptuous place in the Yangtze River Delta region.

The young scholars of the city amused themselves by selecting the eight most attractive courtesans, listing them as the Eight Qinhuai Beauties, or Qinhuai ba yan. No matter how the list varied, Dong was always on it.

Born into a family that ran an embroidery shop in Suzhou, Dong became a courtesan at age 15, after her father died and the family shop went bankrupt. The brothel social circle brought her and Mao together.

After several years of long-distance dating, Mao rescued Dong from the brothel and took her as his concubine. 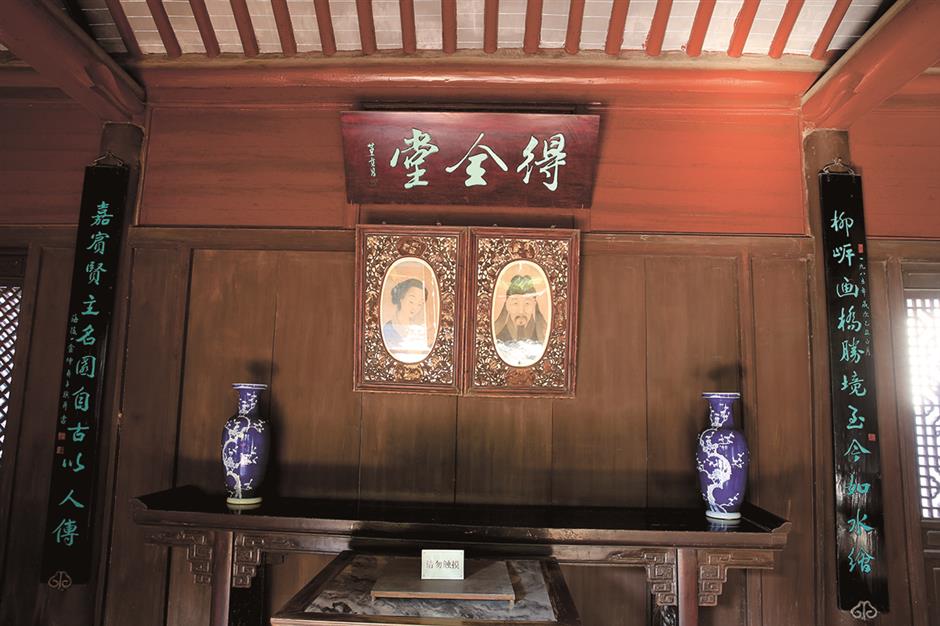 Portraits of Dong Xiaowan and Mao Pijiang hang in one of the halls in Shuihui Garden.

The two lived in Shuihui Garden, but their story doesn’t have a happily-ever-after ending. Just a year after the pair married, the Ming Dynasty collapsed, along with their fortunes. Destitute, they fled from Rugao.

Upon returning a bit later to the garden, Dong fell ill because of poverty and exhaustion. She died at age 28.

Dong was good at verse, painting and singing, and was especially interested in playing the guqin, a plucked seven-string Chinese instrument. The table where she played the traditional instrument is well preserved in the garden.

Dong died before Mao, who lived to be 83, rebuilt the garden. She never got to see the peach blossom trees that blanket the garden in pink every spring, or the rockery that resembles nine lions, or the pavilions that present different vistas of the garden.

But she might have visited the neighboring Gudan Garden, which was built by one of Mao’s friends. That garden today is noted for its display of Rugao-style bonsai, one of the main bonsai styles in China. Its main features are small pine trees trimmed to precision. 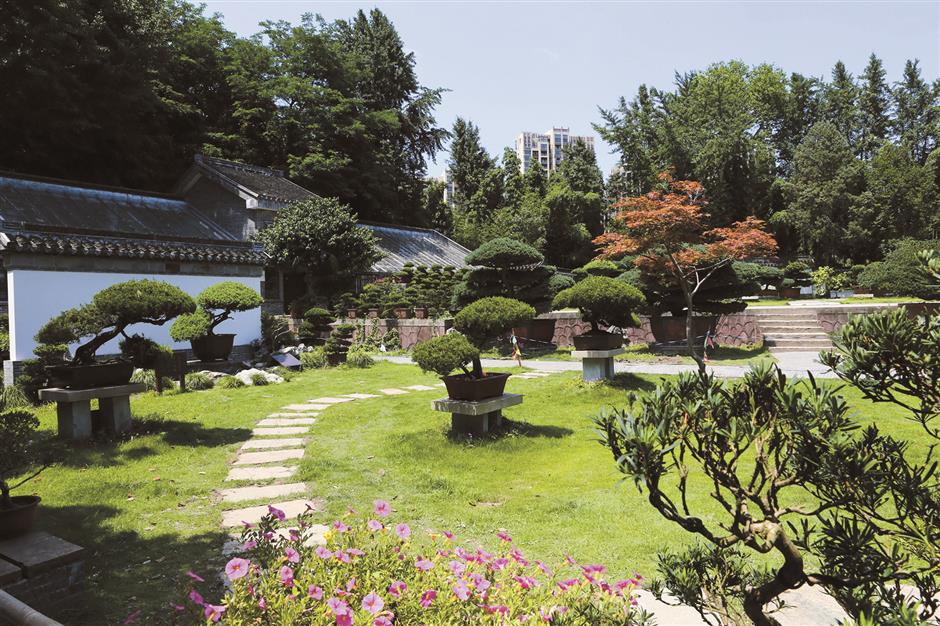 Next to Shuihui Garden, Gudan Garden features a gallery of Rugao-style bonsai works.

Shuihui Garden is generally well preserved, with a small zoo and amusement park later added. Fortunately, the additions don’t detract from the tranquil beauty of the garden.

Rugao was not only home to Mao and Dong, but also housed a more internationally known figure — the Chinese-American forensic scientist Henry Chang-Yu Lee.

Born in the city in 1938, Lee and his family moved to Taiwan when he was 5. He began a distinguished career in the United States in the 1960s.

He worked on famous cases, such as the JonBenét Ramsey and O.J. Simpson murder cases and the reinvestigation of the assassination of John F. Kennedy.

There are no obvious ties between Lee and Shuihui Garden. His legacy is preserved in the Dr Henry C. Lee Museum of Forensic Science that opened in Rugao in 2009.

Originally the museum was established in an old house once inhabited by the Lee family, but it was later moved to a more magnificent, modern building.

The museum exhibits famous Lee cases with files and some physical evidence, mostly donated by Lee himself.

The old family residence remains on Dongdajie Street, an old road quite near Shuihui Garden. The very narrow lane — too narrow for cars — looks much like it did hundreds of years ago, flanked by gray-brick houses on both sides of a flagstone passageway.

Behind the shop fronts are the residences of the shop owners, whose backdoors face directly onto a river, just like houses in Venice. In ancient times, cargo boats plied the river, unloading goods through the backdoors.

The street today is mostly devoid of tourists. You can see clearly which old houses are authentic and which are tarted-up replicas.

There are still gems to be found — a delicately carved lintel or some carved window panes that reflect a long-gone prosperity.

﻿
Special Reports
ADVERTISEMENT
61906
,
In garden of an ancient romance, lovers didn't live happily ever after
'Mother River' beckons you to her shores
Discover the most #Instaworthy temple in central Taiwan
Yiqiao Street historic block gets facelift
Discover Chinese version of 'Last Supper' in a Taiwan church
Tasty lotus seeds now even easier to enjoy
Authorities test waters with Fuchun River night cruise
'Blessed land' beckons with pagodas and its own 'great wall'
Idyllic retreats away from the concrete jungle
Little-visited, centuries-old nook manages to retain a certain charm
EXPLORE SHINE