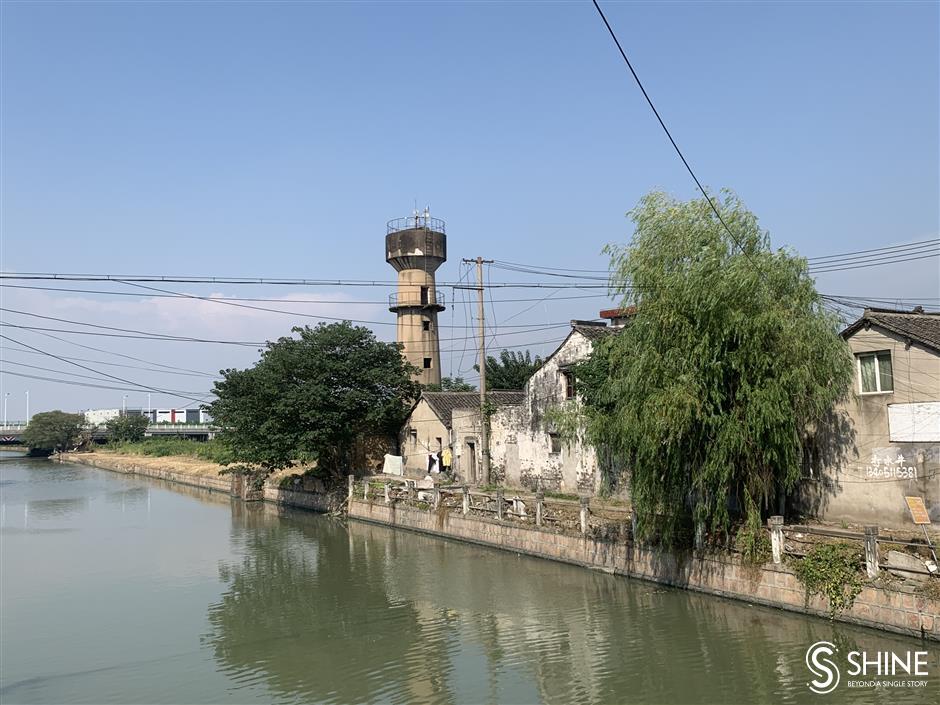 A khaki-colored water tower marks the center of Huayang Old Street in Songjiang District. Let it be your “direction star” and guide you, after you walk about a kilometer west along the old street and arrive at the God of Earth Temple, to the renovated Yang Family Old Residence nearby, or the intangible cultural inheritance center for Chedun silkscreen block printing. 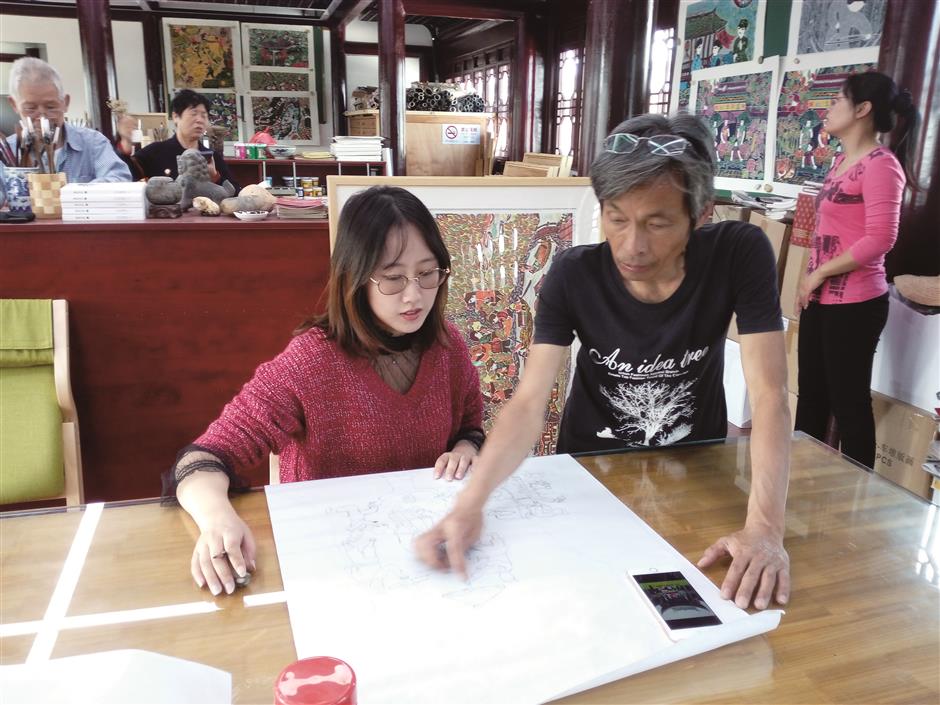 When the Huayang Old Street Community was in its former stage of Huayangqiao Village more than three decades ago before it was merged with Chedun Town to form the current administrative division of Chedun in 2009, Zhang Yuliang, a Huayangqiao local then in his 20s, used to cycle for 40 minutes on a single trip to arrive at the downtown Songjiang Cultural Center, where he and another 20 or so Huayangqiao youths learned silkscreen block printing skills under the coaching of local masters Zhou Hongsheng and Zhu Mengneng.

“The roads were dirt paths and pebble-strewed paths and in a developing Songjiang village in the 1980s art and culture unfolded on limited occasions. When the art form of silkscreen block printing unfolded in front of us — the cultural center offered us an opportunity to learn the art — I was curious, fascinated and managed to persist in learning the art,” said Zhang, who started as an amateur practitioner, felt bewildered and temporarily halted the practice during the country’s rapid economic development in the 1990s, and finally resumed to be a silkscreen block printing practitioner since 2010.

After about 10 years’ practice as a professional silkscreen block printing artist, Zhang is now head of the intangible cultural inheritance center, which, after two years’ renovation of an old residence, will formally open to the public in mid-October.

The center consists of a courtyard, which serves as a gallery to showcase the vigorously colored and delightful works of silkscreen block printing, a garden where luffa flowers and water lilies are carefully planted, and a two-story building that houses the work studio for the center’s 24 artists.

“It’s rare that a local village art form can be nourished so well. The government made efforts in supporting the renovation of our center and artists of silkscreen block printing in Chedun are of one mind to preserve and develop the art well. Silkscreen block printing, as a peasant painting art form that generated among grassroots people, ought to serve as a reward for the public,” said Zhang.

The art form, drawing on Western industrialization achievements by using sensitive papers to produce negatives and a tailored machine to produce silkscreen blocks, differs from ordinary Chinese peasant paintings in that subtle patterns formed through paints filtered through a silkscreen are reflected on the final works. 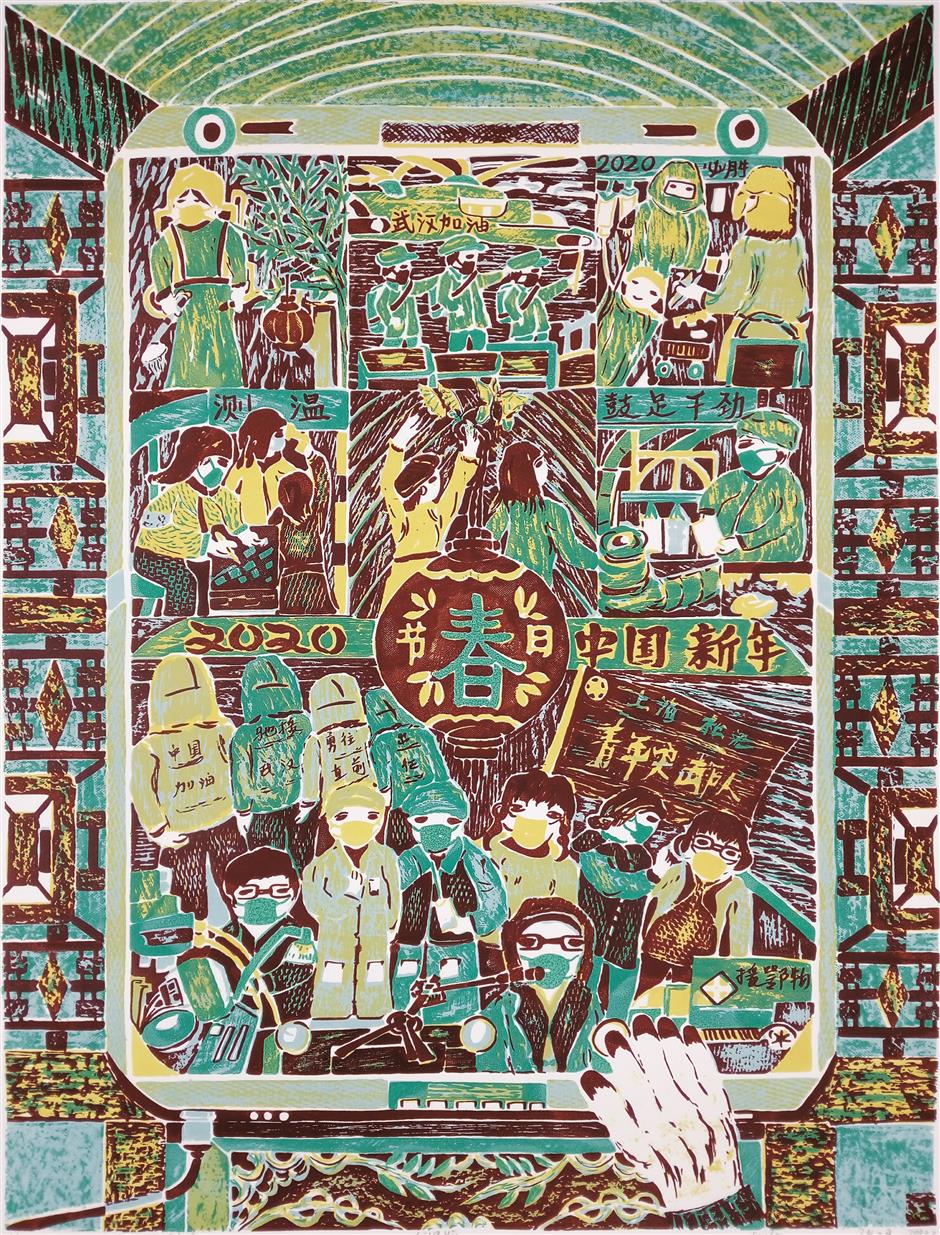 A silkscreen block print by Zhang Yuliang, an artist and head of the intangible cultural inheritance center.

How to get there: Take Metro Line 5 to Beiqiao Station, then No. 881 Bus at Beiqiao Stop to the Huayangqiao Stop, walk to the God of Earth Temple guided by your mobile positioning app, and the center is right near the temple. 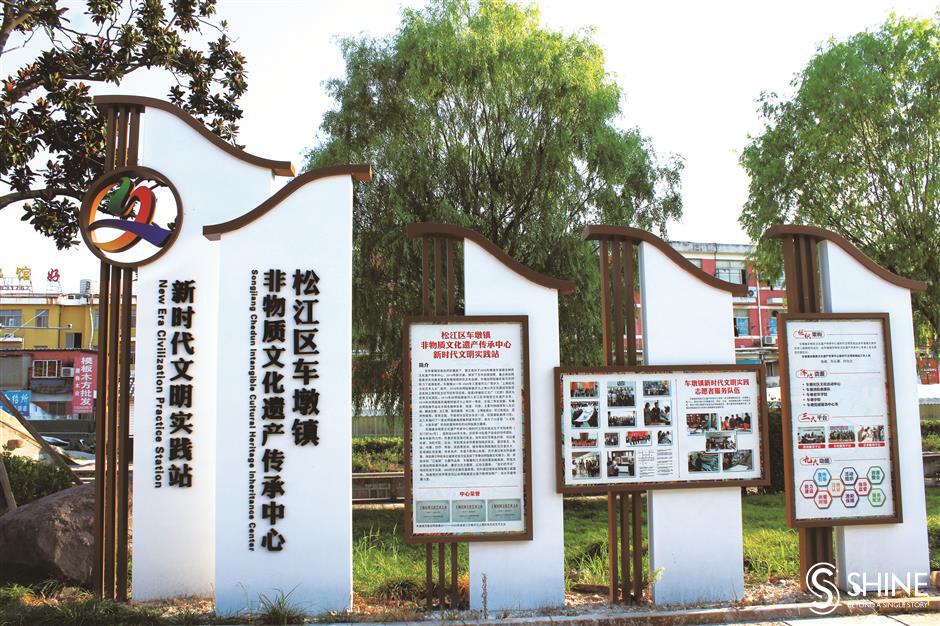 Boards that introduce the basics on Chedun silkscreen block printing