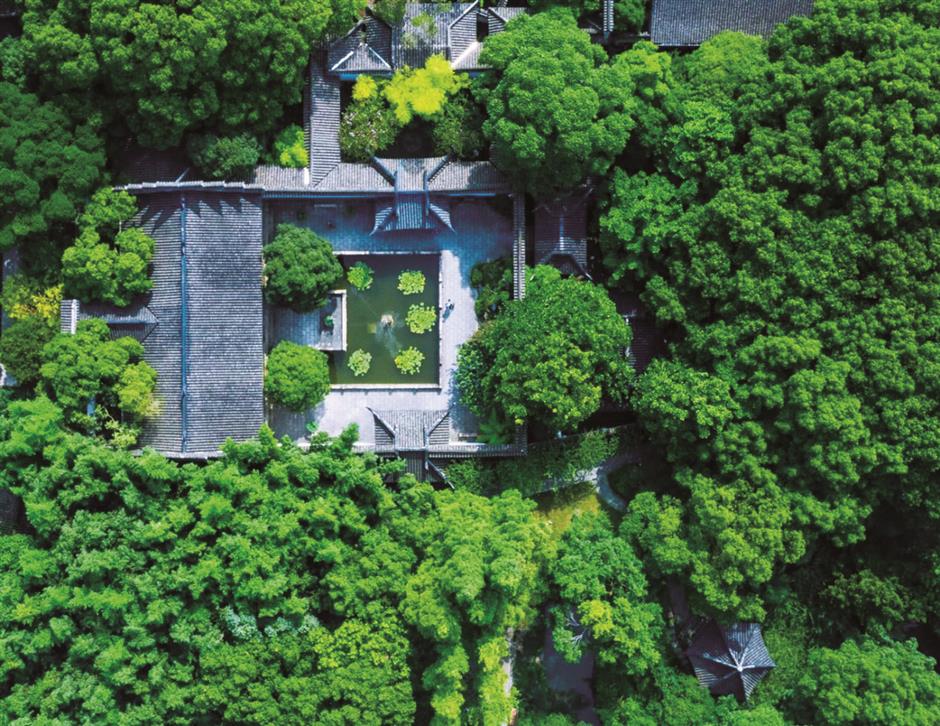 Zuibai Pond Park, a classical garden with more than 900 years of history in Songjiang District, is holding its autumn cultural festival to mark the approach of autumn and the district’s cherished traditional culture. The festival, consisting of a variety of activities, will be running until October 10.

From September 10 to 25 a calligraphy exhibition paying tribute to Gu Dashen, a Ming Dynasty (1368-1644) painter and former owner of Zuibai Pond Park, is on display at the park’s Tablet Gallery Exhibition Hall. The exhibit is showcasing calligraphy works by modern Chinese artists.

As the game of go used to be a preferred skill among Chinese literati and scholars in ancient times, Zuibai Pond Park, together with a youth go club in the district, will launch a youth go competition at the park’s Carved Hall on September 20. The competition has been held successively for six years.

To greet the Mid-Autumn Festival, which falls on October 1 this year, the park will also hold a calligraphy salon from 1:30pm to 3pm on September 21 when members of the district’s calligraphy association and calligraphy lovers will gather at the Carved Hall and appreciate, comment and learn from each other the aesthetics of calligraphy.

A poetry-reading activity, co-organized by the district’s cultural center and Huating Poets’ Club, will be held at the park’s Xuehaitang Courtyard from 2:30pm to 4pm on September 28 to explore Jiangnan culture and Shanghai-style culture.

A second painting and calligraphy exhibition will be held at the Tablet Gallery Exhibition Hall from September 30 to October 9, featuring more than 20 sketches of scenery inside Zuibai Pond Park by contemporary Chinese artist He Xianqian.

At the park’s Peony Stage on the Grand Lawn, traditional Chinese operas including Huju Opera, Yueju Opera and Huangmei Opera will be performed from October 1 to 3.

It is suggested that visitors reserve tickets through the park’s WeChat account or various online booking platforms including Meituan, Dianping, Ctrip and Huyouma during the festival. Visitors’ identity cards, health codes and body temperatures will be checked upon entry.

Special Reports
ADVERTISEMENT
61771
,
Restored admiration for Zhu family in Songjiang
An island park so close to downtown but still obscure
Hangzhou enticing non-natives to stay put over holiday
New look and a new life for the old street
Let an umbrella be your smile! A town with plenty to be happy about
Rainbow colors among sports park's green
What's on in Songjiang District in January
Western-style villas from a bygone era in Shanghai
Yuhang policy bears fruit in tea culture
An ancient king who carried cultural secrets to the grave
EXPLORE SHINE