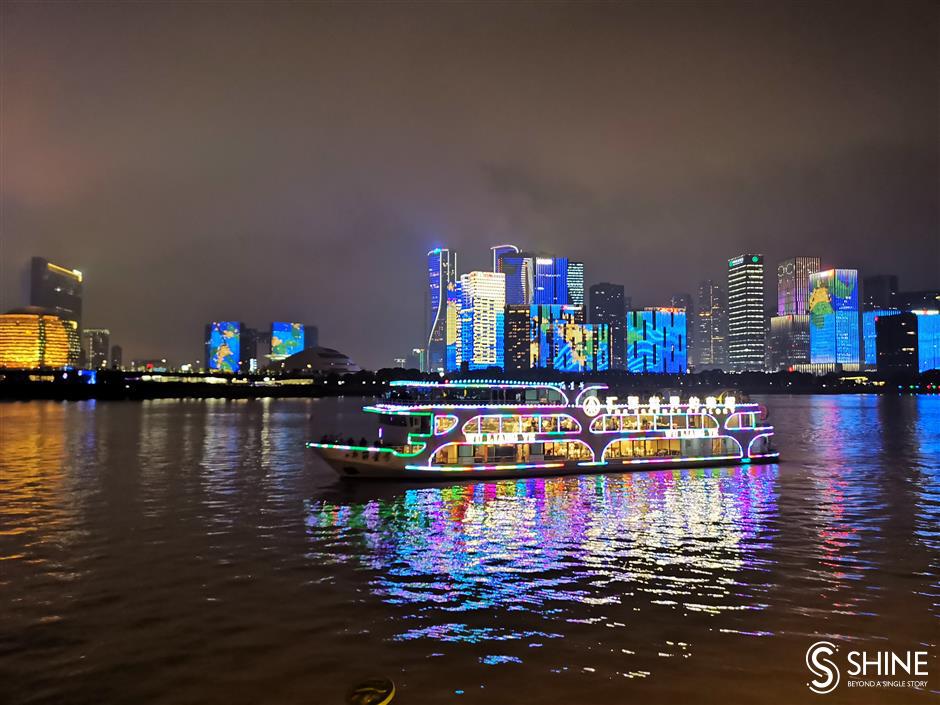 A cruise with folk cultural elements runs on the Qiantang River, while high-rise buildings and landmarks along the river light up with dynamic images.

Hangzhou’s West Lake has long stolen the tourism thunder from the Qiantang River. To develop the river’s tourism potential, Hangzhou government started a cruise project in 2017 and invested billions to develop cruise liners along the watercourse.

Last October, the ship Qianyin had its maiden voyage. Since then, the vessel has become one of the most popular tourism attractions among out-of-town visitors.

From the Binjiang Jiankang Park wharf, people board the ship which then cruises to the center of the river to view a light show on its banks. High-rise buildings and landmarks along the Qiantang River light up with dynamic images.

The Qiantang River is reckoned to be the world’s largest tidal bore. As the tide rushes into the mouth of the river from Hangzhou Bay, the natural phenomenon can see waves rise to a height of up to 9 meters.

The tides attract cavalcades of visitors and are best viewed in October, when they are at their highest. The ship’s schedule may vary during the tidal period. Visitors are recommended to follow the official WeChat account of “Qiantang River Aquatic Tourism” when they are purchasing tickets.

The ship, measuring 50 meters in length and 16 meters in width, can accommodate up to 498 people. Local departments designed it with folk cultural elements, leaving space on board for performances, dining, exhibitions and ceremonies.

﻿
Special Reports
ADVERTISEMENT
61761
,
Restored admiration for Zhu family in Songjiang
An island park so close to downtown but still obscure
Hangzhou enticing non-natives to stay put over holiday
New look and a new life for the old street
Let an umbrella be your smile! A town with plenty to be happy about
Rainbow colors among sports park's green
What's on in Songjiang District in January
Western-style villas from a bygone era in Shanghai
Yuhang policy bears fruit in tea culture
An ancient king who carried cultural secrets to the grave
EXPLORE SHINE