The face of Nanjing Road E. has changed many times since its origins more than 150 years ago. Called Park Lane when it was first built, the roadway was initially a narrow street leading to a nearby racecourse that became today’s People Square. Most of the people who traveled the road back then were on horseback.

Around 1865, the road was renamed Nanjing Road. It was considered China’s first modern commercial street, and businesses mushroomed there. The road boasted the highest building in Shanghai, its first cinema and its first music hall. For locals, it was the most popular place to go in the city.

Since the 1990s, after the road was converted into a pedestrian street, Nanjing Road has become more of a city icon. It is on the must-see lists of visitors to the city.

Nanjing Road has long connected the waterfront Bund and the People’s Square, but until recently, it was part pedestrian mall and part roadway.

A newly opened section has extended the pedestrian mall all the way to the Bund. Many venerable old Shanghai brand stores have opened or reopened there.

Nanjing Road is now a walker’s delight and ideal daytime excursion close to home, full of memories and brimming with new things to see.

So let’s walk it, starting at the Bund end, and chat with some of the people who have come to see an exciting new addition to Shanghai’s attractions. 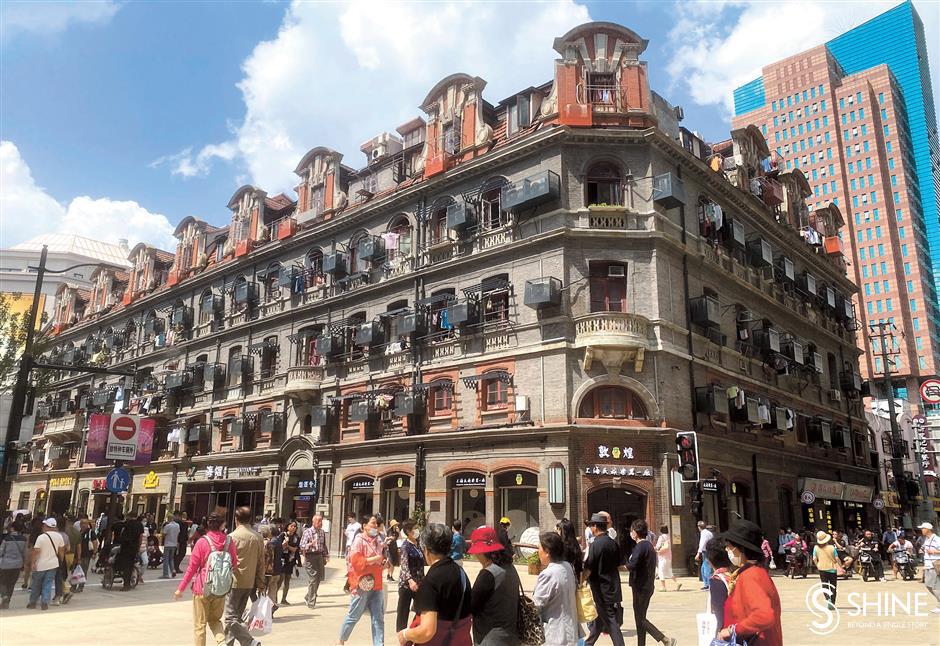 Locals flock back to Nanjing Road to explore the extended pedestrian mall. The new section houses many venerable old brand stores, gussied up with a new look.

Walking past the north and south wings of the Peace Hotel, you come across Huiluo Co, a century-old, renovated store specializing in silk products, qipao and other traditional Chinese-style garments, and puffer jackets.

The company was named after its two British founders — Whiteway (hui) and Laidlaw (luo). In its early days, the store was known for selling imported gifts and souvenirs. After the establishment of the People’s Republic in 1949, it became a displaying hall for light textiles bureau and sold textile products. It was a place where people could buy inexpensive clothes and garments.

Before the recent renovation, the store was best known for discounted silk products and puffer jackets.

“The store looked old, and its fit-out made it hard to get around,” says Carol Luo, who visited the store in May. “And the style of the clothes was quite old-fashioned — the type favored by seniors. However, the discounts were pretty attractive so I bought two dresses for my mom and grandma.”

The renovation has brought in a new broom. The products no longer look outdated. Instead, silk scarves, qipao and embroidery ornaments are stylish enough to make souvenirs for visitors — definitely more so than the Russian-imported sweets sold on the opposite side of the street.

The building was formerly known as the Central Department Store, or Zhongyang Shangchang.

Yu Aiyin, 74, said she is astonished by how it looks now. She and her husband took a camera to photograph the changes, including a lotus-shaped crystal chandelier and an entire floor with walls covered by paintings.

To most Shanghai seniors like Yu, Zhongyang Shangchang was a place for getting things repaired. It also sold merchandise, but that’s not what made it popular with locals. Booths there seemed to offer repairs for everything, from household electric appliances to umbrellas and cooking pots. 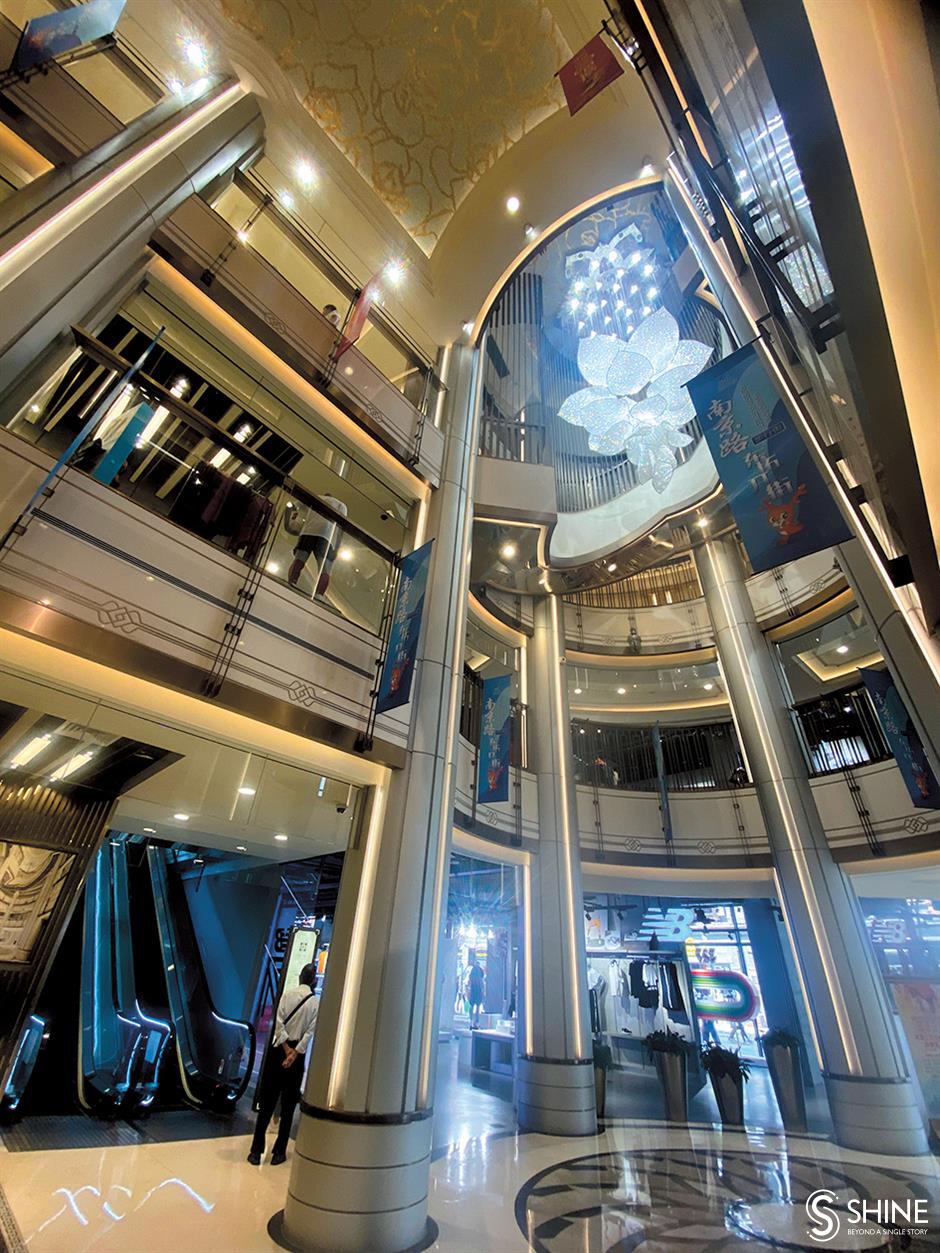 The Central is no longer the Zhongyang Shangchang with the dim, narrow interior that many people remember.

In 2005, the department store closed and the repair work moved to nearby Tianjin Road, where it still operates today as Zhongyang Shangchang Repair Co.

Now, more than a decade later, the original department store finally reopened as the Central. An air corridor connects it with the neighboring Mellon Building, forming a twin mall that mainly targets young people.

A branch of Peet’s Coffee and a UR Bakers is a collision with chemistry between American and Chinese dining brands. Based in San Francisco, Peet’s Coffee is believed to have introduced dark, roasted coffee to the US in the 1960s, while UR Bakers is operated by popular Chinese brand Bright Dairy & Food.

“Everyone knows about White Rabbit candies, the Bright ice cream brick and Bright milk in Shanghai,” Yu says. “And I hope their bread is as good as their other products.”

Although the word “lane” is used in both names, these two places actually refer to two old buildings across the street from the Central, at the crossroads of Nanjing Road E. and Jiangxi Road M.

You can’t miss Cichang Lane, at least not now, because there is always a long line in front, waiting for freshly baked, meat-stuffed mooncakes made by Taikang Food Co, which has newly established itself there. Famous mooncakes draw a long queue ahead of the Mid-Autumn Festival.

Old and new, East and West meet in these two buildings, which were developed by British real estate tycoon Silas Hardoon (1851-1931). Snack shops, bubble tea booths, a Japanese-style bar and a pizzeria, to name but a few outlets, fill different floors and attract people of different ages.

A store called Xinghuo Day & Night is one of the oldest in the area. It began in the 1960s as the first 24-hour convenience food shop in Shanghai. These sorts of shops are a dime a dozen nowadays, but back then, Xinhuo was the only place to go in the middle of the night for people craving a snack or needing some necessities like matches or cotton swabs. Today, the store sells local specialties.

Meanwhile, the traditional Chinese teahouse Wangyiji provides an oasis of tranquility amid the urban bustle. The teahouse, first built in 1880, now shares its home with Uchiyama Bookstore, a place founded by Japanese Kanzo Uchiyama in 1929. The bookshop is famous because renowned writer Lu Xun was a frequent patron.

“It is much less known that the bookstore moved to Cichang Lane in 1941 from its original location in Hongkou District, five years after Lu Xun died,” says Chen Gang, an official with Taikang. “We didn’t know about that until we planned to renovate the building. Now we have created a reading corner in the teahouse to commemorate the bookstore, its founder and its most famous patron.”

The new extension of the pedestrian mall is noteworthy not only because of its shops. People still live there. Clothes hang out to dry from windows, giving the area a human face beyond commercialism. Perhaps it won’t be long before residents are relocated. But for now, they can witness exciting changes from their windows.