As tourist stops go, one village is a different kettle of fish

When Peggy Zheng first stepped into Wangmantian Village in Anhui Province, she was amazed by how primitive it was.

Hidden deep inside a mountainous area 40 kilometers away from the nearest bus station, Wangmantian attracted Zheng, a handicraft enthusiast from Beijing, because of its fish lantern parade, a folk custom dating back more than 200 years.

“The parade is actually held every year around the Lantern Festival, which falls on the 15th day of the first lunar month, but this year because of the coronavirus epidemic, I missed the event and didn’t get to visit the village until June,” she said.

The village still looks pretty much like it did a century ago. Ancient buildings and bridges are constructed in typical Hui-style architecture, a Chinese style that has prevailed in the ancient area of Huizhou, including what is today’s Anhui.

People still live in a pre-Internet era, communicating with each other by dropping around rather than texting or using mobile phones.

“All the families are more or less related to each other, mostly surnamed Wang,” Zheng said. “It is so safe here that the villagers don’t bother locking their doors during the day.”

Although Zheng didn’t get to see the fish lantern parade this year, local people told her a lot about the event and showed her some of the classic fish-shaped lanterns.

Villagers for centuries believed that a huge stone, smooth as a mirror, fell from the sky onto a nearby hill. Superstitious residents believed it was the source of all fire-related accidents. Because water is the antithesis of fire, they organized a fish-lantern parade every Chinese New Year to pray for a safe 12 months ahead. 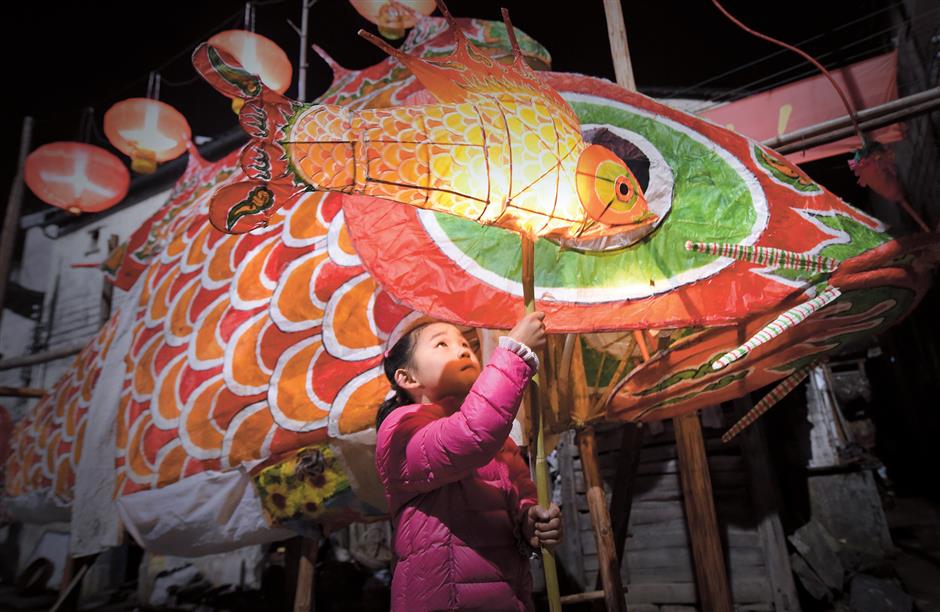 An annual fish lantern parade has been held in Wangmantian Village in Anhui Province for about 200 years.

In bygone days, all the men in the village would parade with fish-shaped lanterns for three successive nights.

The most prominent lantern, a “king fish,” is 7 to 8 meters long and 3 meters high. Its frame is constructed of bamboo and its body is made of tissue paper, with hand-painted scales. Candles are lit on the inner side of the fish body, and it requires about 20 men to carry it.

The traditional procession is accompanied by lion dancers, a gong-and-drum band and people carrying other lanterns. Children often carry the much smaller lanterns at the back.

Legend has it that the fish lanterns should “wag their tails” three times when passing ancestral temples to pray for a flourishing population.

On the last night of the parade, after reaching the stone, or the “fire mirror” site, all the fish lanterns “wag” their tails and villagers bow to the stone, praying for a safe year.

Like many other small rural villages in China, most of the remaining population in Wangmantian are older people. The young leave for cities to seek a better life.

Nearly all the seniors in the village know how to make a fish lantern. Zheng said she wants to promote this unique lantern culture far and wide.

“Before visiting the village, I had already seen people posing with fish lanterns while wearing traditional Chinese garments go viral on the Internet, so I knew there must be a need beyond the village,” she said.

Easier said than done. Making a fish lantern takes at least two days for an experienced craftsman — one day to make the frame from bamboo collected from the mountains, and the other to make the body and paint the scales. But the lanterns, as they are currently constructed, might be too fragile for shipping elsewhere. 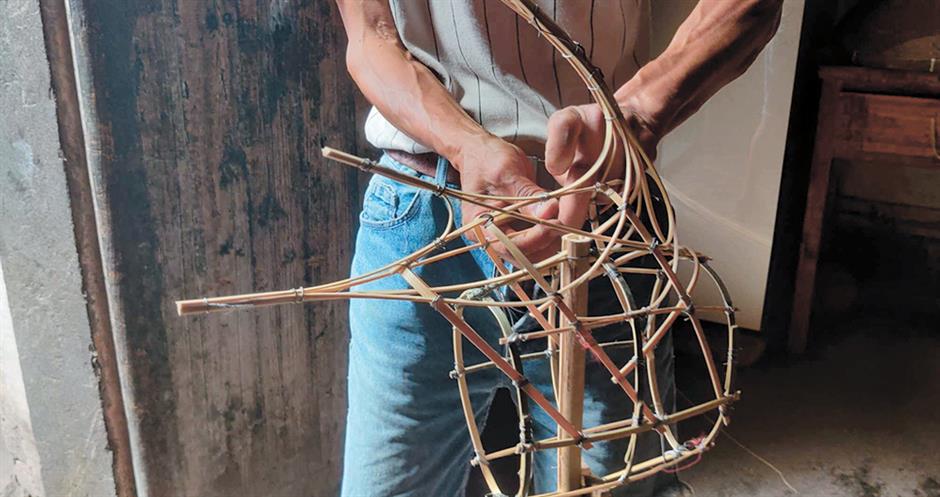 From making frames of bamboo to painting the scales on the bodies, it takes at least two days to make a fish lantern.

Zheng was undaunted. She managed to persuade some of the older villagers to make lanterns during slack seasons and then sold them, earning some extra income for the village. Some adjustments in construction materials had to be made, and a small team was recruited to handle orders, packing and shipping.

Most of the customers are enthusiasts of traditional Chinese garments called hanfu. They choose different types of fish lanterns to go with various styles of garments, then share their photos and videos on social media platforms. It is popularizing a culture unknown to most Chinese even today.

“I hope that one day we could offer more design options so that customers can order fish lanterns by color and size,” Zheng said. 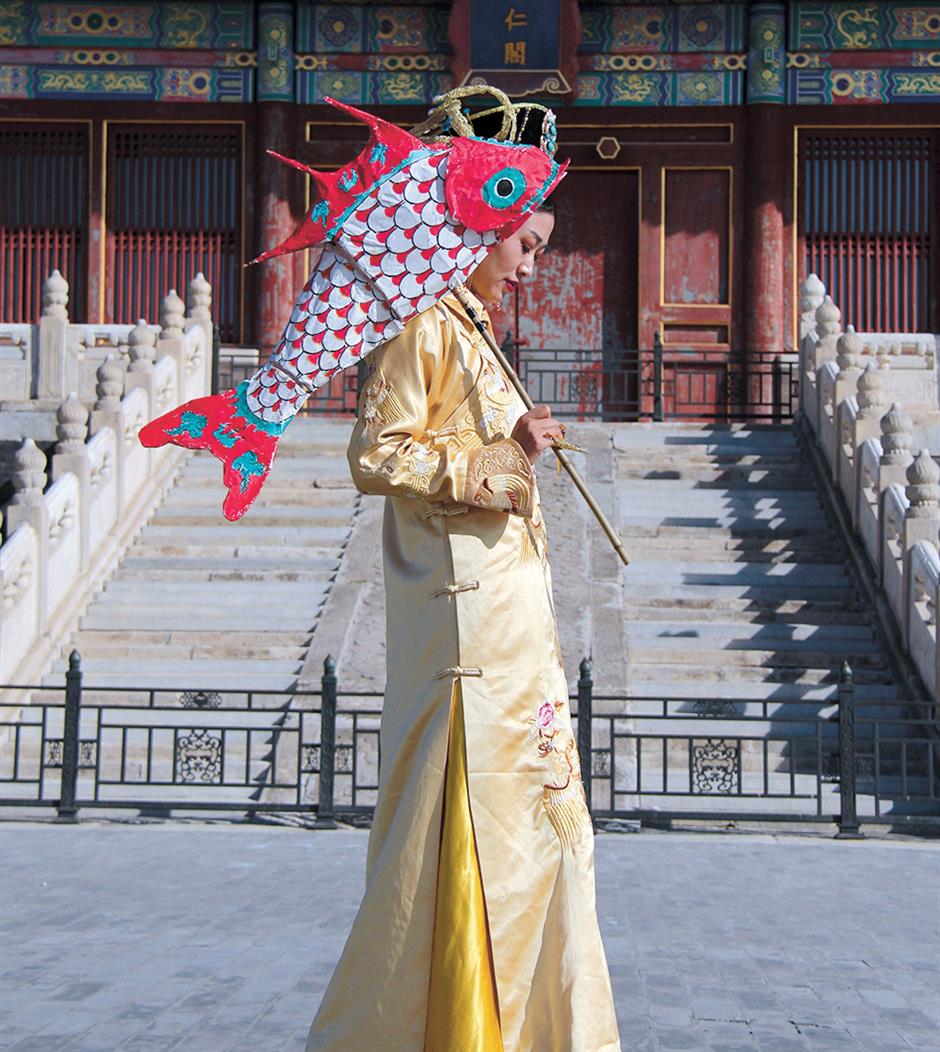 The popularity of the fish lanterns, particularly among younger Chinese, has drawn attention to the village. Wangmantian is welcoming more visitors than ever nowadays, despite its lack of tourist amenities. Only one family runs an inn.

Visitors can participate in local activities, like digging bamboo shoots and picking tea leaves in the spring, or harvesting from Chinese torreya, or nutmeg yews, in the autumn. Because the local economy is reliant mainly on tea cultivation, trying a cup of freshly picked tea is always recommended.

Meanwhile, the ancestral temple dating back hundreds of years, where the fish-lantern parade passes, is also worth a visit.

The building, consisting of seven jin, or rings of houses, is officially called Yongmu Hall, which means “harmony and solemnity.” The temple has not been extensively restored or repainted. It looks its age.

Inside, the memorial tablets of the Wang family are worshiped, attesting to the history of the village.

A huge statue of Chairman Mao Zedong is also worshipped in the hall, among all the mottled paintings and cracked carvings on doors, columns and beams.

The statue was a grand prize, granted to the village in 1968, for building a tea farm on a mountainside. It is believed to be one of only two Mao statues left in Anhui Province, a testament, of sorts, to the degree that the village has been bypassed by contemporary life.

“You will never get bored in Wangmantian,” Zheng said. “You could hike up 1,400-meter-high Shangyangjian Mountain to enjoy a splendid natural view or marvel at the authenticity of the Hui-style buildings.”

She added: “What’s more, the farm food such as local ham, free-range chickens, dried bamboo shoots and preserved vegetables are so delicious that they alone are worth the visit.”

There are direct high-speed trains from Shanghai to Shexian County, the nearest station to Wangmantian Village. From there, it’s best to book a taxi because bus transport is sporadic at best.