An ancient king who carried cultural secrets to the grave

Before I left for a recent holiday in Guangzhou, I asked several friends to recommend their favorite places to visit in the southern city.

While they all agreed that I should put dining over sightseeing as a priority in the capital of Cantonese cuisine, most of them also mentioned the Museum of the Nanyue King of the Western Han Dynasty as a site worth seeing.

I took their advice and set aside half a day for the museum. It turned out to be more than I expected.

If I had lost my patience during the boring first half of a somewhat poorly arranged exhibition on ancient Chinese ceramic pillows and relics from the ancient State of Yelang, I might have missed the true gem of the museum. 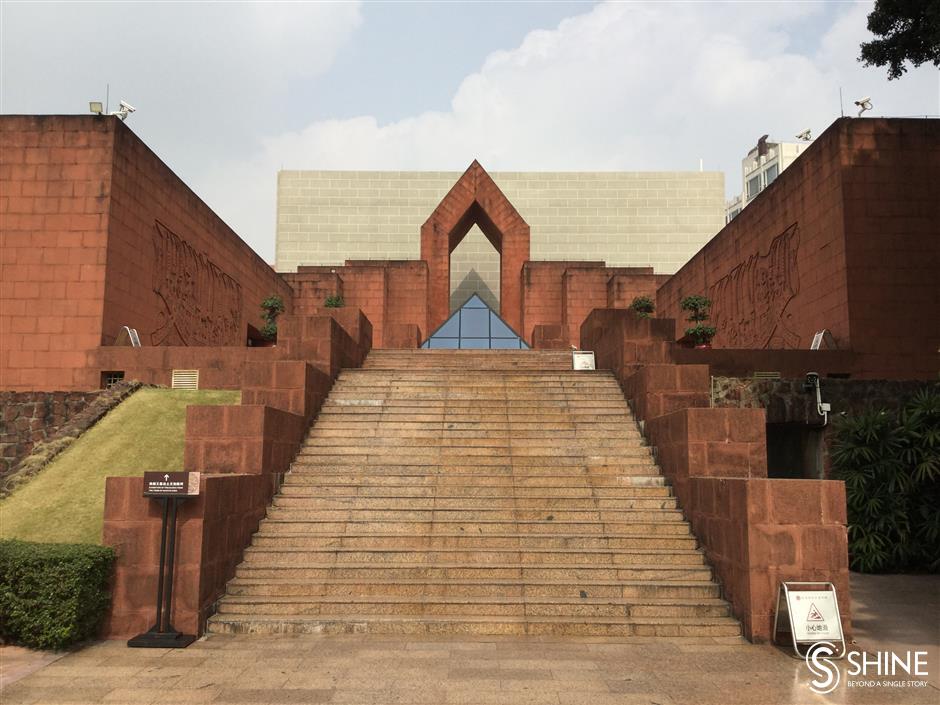 The Museum of the Nanyue King of the Western Han Dynasty is on Xianggang Hill, where the tomb of the royal was unearthed.

As I stepped out of the first exhibition building, panting because of the steep stairways and lack of elevator or escalator, I found myself on the top of a hill. Called Xianggang, the hill contains the site where the grave of the Nanyue King was discovered.

Walking along an outdoor passageway, I reached a long stairway that led down to the crypts of the grave. It didn’t look as magnificent as I would have imagined for a king. After all, the Dingling crypt in Beijing for Emperor Wanli of the Ming Dynasty (1368-1644) resembles an underground palace!

But the Nanyue King rested in peace in a narrow pit. You have to stoop a bit when walking through the door to enter. 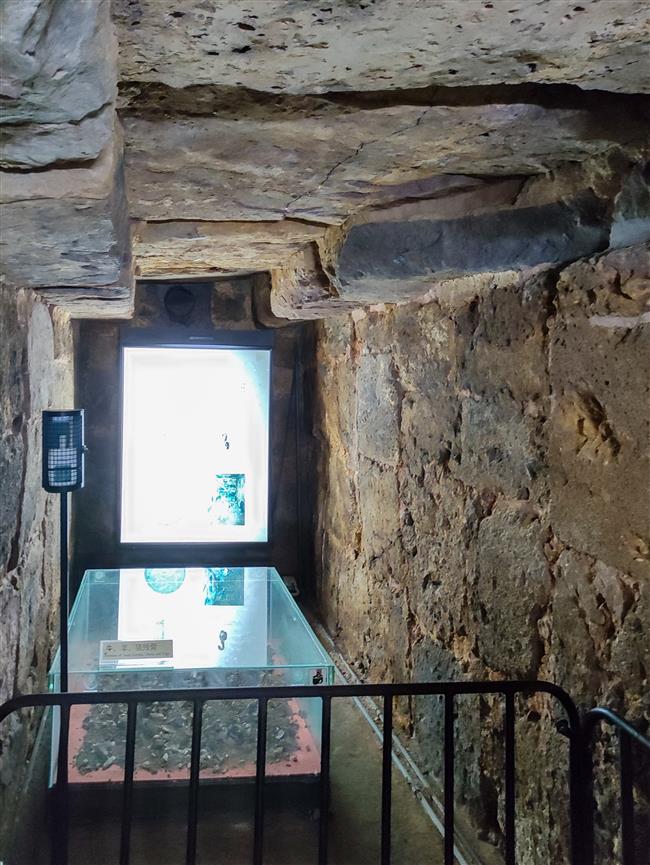 In a chamber of the crypt, the skeletal remains of a concubine are displayed under glass.

The layout of the grave tells us much about how people back then regarded death as well as the life of a king. I realized that was the point of visiting this museum — to learn the story of the king firsthand from the relics he left behind, instead of just reading what books try to tell us.

The grave had seven chambers, one with the king’s coffin, one for the coffins of his wives, and the other five for burial objects and human sacrifices.

The king’s name was Zhao Mo, who died in the year 122 BC, his birth year unknown.

He was the grandson of the founder of the Nanyue Kingdom, a vassal domain affiliated to the Western Han Dynasty (206 BC-AD 25), which today forms Guangdong Province and the Guangxi Zhuang Autonomous Region and part of Guizhou Province.

Zhao had four concubines. One of them apparently ruled the roost, with the most and best burial objects, including a gold personal seal. The others had to settle for jade seals.

No matter how much he loved his concubines, the king had them buried alive with him, as was the custom.

Seven servants and cooks were slain and buried with him as well, in a separated crypt without the benefit of coffins.

The burial objects have all been moved from the crypts into the museum. Only the skeletal remains of one of the wives are left on display in a transparent coffin in the crypt.

Looking at the bronze pull ring on the heavy rock gates that once sealed the grave, I could feel the excitement that must have overwhelmed the first discoverers of the gravesite about 30 years ago.

In 1983, a group of workers on Xianggang Hill found some orderly slab stones buried in the mountain. They noticed hollow spaces between the slabs. Their curiosity was reported to an archaeological team, who rushed to the scene amid speculation of an ancient grave.

When the archaeologists finally managed to pry open the stone doors and went through a short passageway, they found a decayed coffin in the central chamber. The body inside had nearly disintegrated, but a volume of jade burial objects remained mostly intact.

The archaeologists found many bi, or jade circles with holes in the center; huang, or semi-circular jade pendants; and countless small pieces of jade covering the body, sewn together by silk threads that had also decayed. 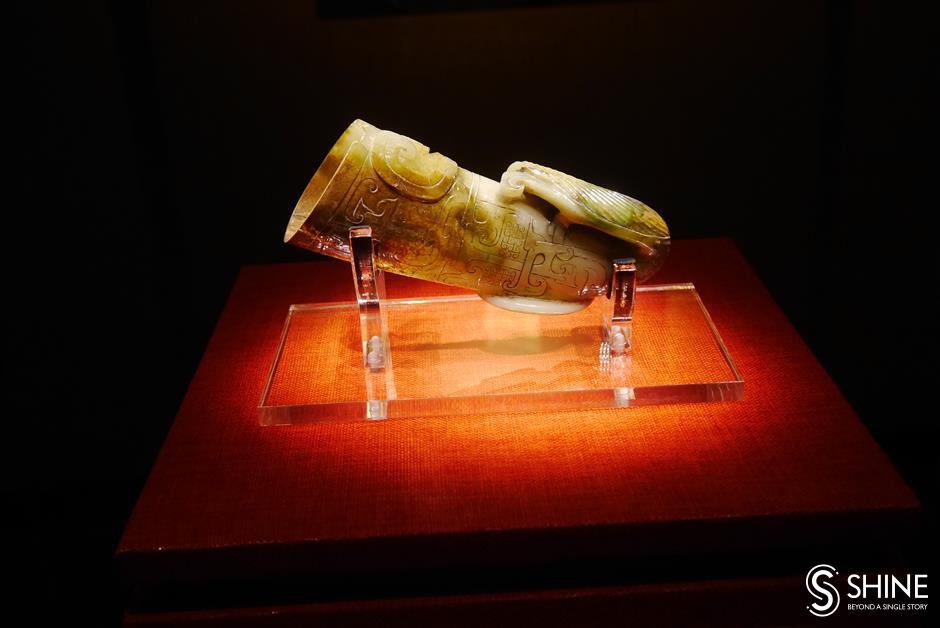 A jade goblet buried with the Nanyue King

The discovery shocked everyone because in ancient China, only kings or nobles were allowed to wear jade clothes when buried.

Further exploration found a royal seal that read wendi, or King Wen, which finally confirmed the identity of the buried ruler.

The jade clothes, the seal and the partial skull and teeth of the king are displayed in another exhibition hall in the museum.

His clothing has been resewn with red silk threads and is exhibited on a plastic model to show how they were worn. 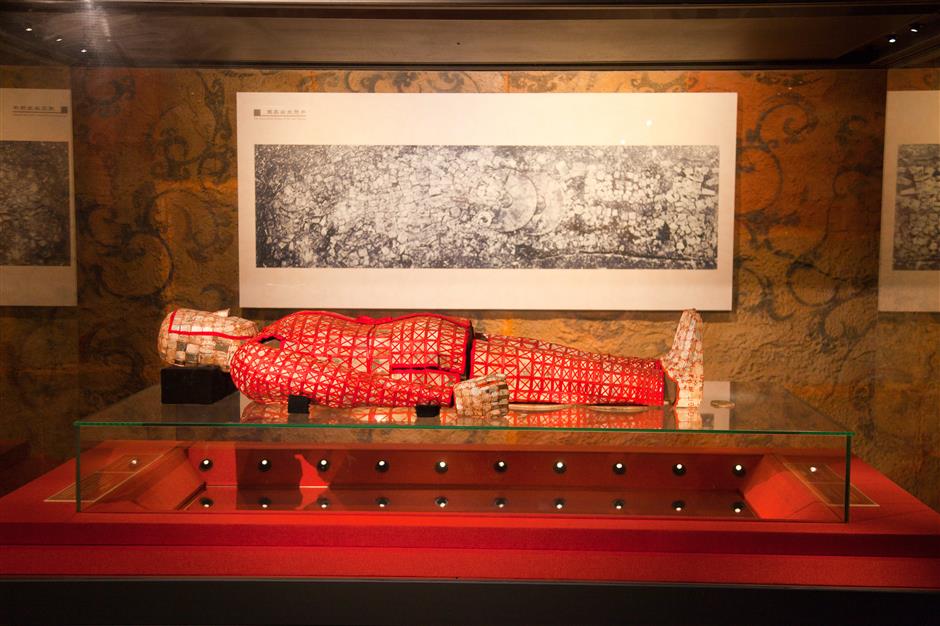 Jade clothes sewn with silk threads covered the king’s body. The garments have been repaired and are now displayed in the museum.

A video in the museum screens a history of how the burial objects were distributed in the king’s coffin. Jade bi and huang were placed both on and under his body, and two jade goblets were alongside. The ancient Chinese believed that jade would protect a body from decay and bless the soul of the dead, hence the great amounts of jade were used in imperial graves.

The royal seal is displayed as well. Unlike other burial objects, which were made especially for the funeral, the seal was apparently used by the king when he was alive. Its corners had scratches, and ink was left on the characters.

It said a lot that the objects found in one grave alone could fill a two-floor exhibition hall.

Apart from all the jade ware, daily necessities, furniture, animal skeletons, food and medicines, weapons and carriages were found in the crypts. They give a vivid picture of how the nobility lived in Guangdong centuries ago.

Viewing them was a bit like being in time machine and going back 2,000 years.

The relics tell us that the royalty ate seafood. They required two maids to wash their hands, one holding a basin under the hands and one siphoning water into it.

A black and red lacquer folding screen provides insight into the luxurious décor of royal accommodation, and the buried weapons reveal the longest sword of the Han Dynasty ever unearthed.

Walking out of the museum and back into reality, it occurred to me that the grave of Zhao Tuo, founder of the Nanyue Kingdom and grandfather of Zhao Mo, remains unearthed.

In fact, for the past 2,000 years, the grave of the founder has always been surrounded by myth. Many people, including emperors, have tried to crack. It is widely believed that the grave is still somewhere to be found in Guangzhou.

When Zhao Mo’s grave was unearthed, archaeologists expected to find some hint about his grandfather’s grave from the burial objects. Now, about three decades later, the myth remains a myth.

But who knows! Maybe a stunning find will suddenly emerge. If that happens, I will pack my bags and head back to Guangzhou.

Special Reports
ADVERTISEMENT
An ancient king who carried cultural secrets to the grave
Old train stops at Dongxia to recall the good old days
As tourist stops go, one village is a different kettle of fish
Sanya a tropical paradise packed with scenic delights
Suzhou: an autumn paradise 'where dreams come true'
'Tis the season to venture out and relish 'the year's last, loveliest smile'
Holiday bummers: the overrated and the underwhelming
As watertowns go, a genuine gem sits in 'backyard of Shanghai'
Strolling along latest downtown attraction, finding nice surprises
Visitors flock to Qiantang River night cruise
EXPLORE SHINE