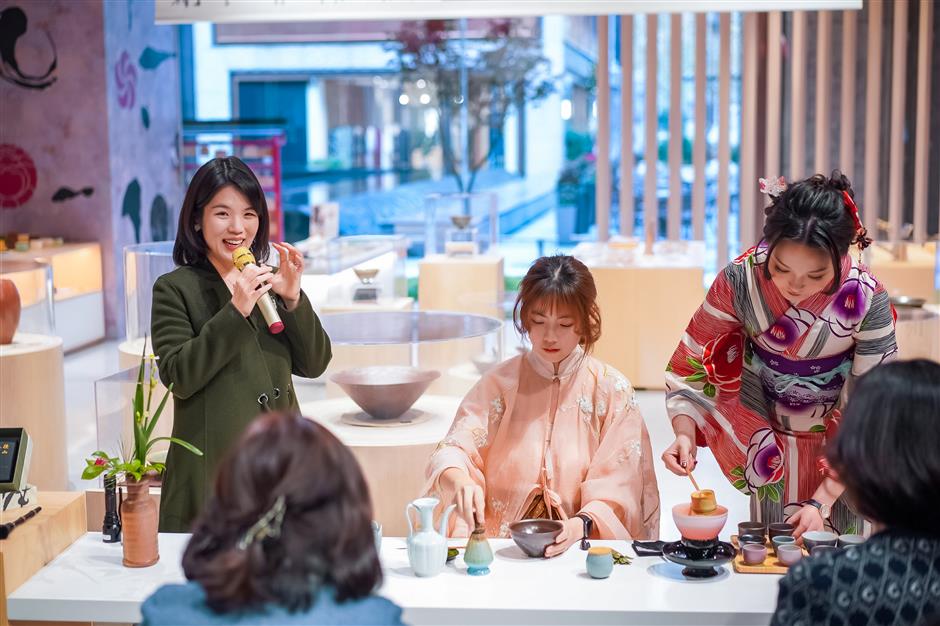 Yu Jixuan (left), who leads a team in the Hangzhou Yuhang Tourism Group to promote the Dajingshan Scenic Area, hosts a lecture on Jingshan tea culture with two professionals making tea at the Kyoto House in Shanghai. Born in Taiwan, she is one of the first to benefit from Yuhang’s “Double 10 Overseas Government Employees” policy.

Yu Jixuan, 31, was one of the first to benefit from the policy. Born in Taiwan, she received a master’s degree from Japan’s Kyoto University and has led a team in the Hangzhou Yuhang Tourism Group to promote the Dajingshan Scenic Area.

“When I lived in Japan, I visited some famous temples and found they had cultural links with Dajingshan,” Yu told Shanghai Daily. “That’s why I chose to work for the tourism and culture industries.”

Dajingshan is noted for its Jingshan tea and the famous Jingshan Temple which dates back 1,200 years to the Tang Dynasty (AD 618-907) when Buddhism boomed.

The Chinese tea ceremony originated in the Dajingshan. Lu Yu, respected as China’s “Sage of Tea,” wrote “The Classic of Tea” in the Dajingshan, the first definitive work on cultivating, making and drinking tea.

During the Southern Song Dynasty (1127-1279), many Japanese monks came to Jingshan Temple and then brought the tea ceremony and seeds back to their homeland. Later, they developed it as an indispensable part of their own culture. 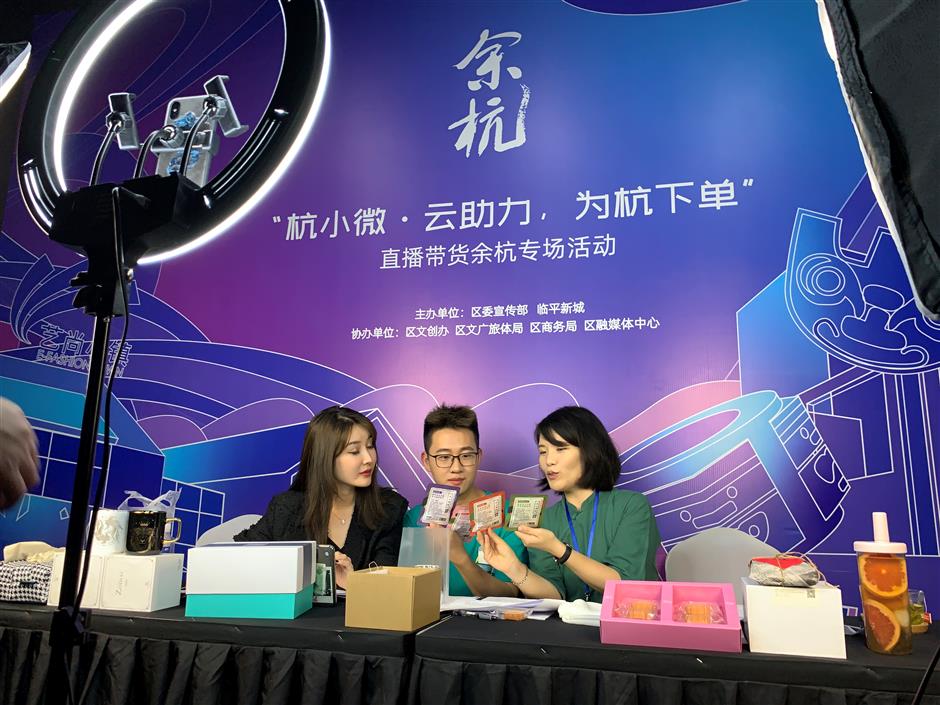 “My life experience in Japan told me the importance of promoting Dajingshan tea culture. In modern days, Longjing tea might steal the thunder from Jingshan tea. Even some Hangzhou locals don’t know about the long history of it,” Yu said.

She and her team have created products and projects themed on Jingshan tea and Lu Yu to spread the traditional tea culture and attract more young people.

Lu Yu Spring Park, one of their projects, opened to the public in October after a one-year renovation. In addition to revamped buildings and pavilions, the park hosts authentic Tang Dynasty tea ceremonies at weekends.

As a ritual performance on important occasions, the tea ceremony had a deep influence on Chinese tea-drinking tradition. During the Tang Dynasty, drinking tea included a series of procedures and particular ways of using brick tea and vessels, different from the modern-day tea ceremony.

“We visited many museums and researched ancient documents to recreate how ancient Tang Dynasty people drank tea,” Yu said. “We even reproduced ancient vessels to restore the scene.”

“In the Tang Dynasty, people added a pinch of salt to tea. We introduce this step too,” Yu said. “Catering to present-day flavors, we also offer other ingredients, including dried jujube, rock candies and preserved orange peel, letting visitors make tea according to their own taste.”

A performer is clad in Tang Dynasty costume, and a guide explains the procedures at the scene. Since the room can only accommodate six people, visitors are recommended to make an appointment beforehand.

During her first year in Yuhang District, Yu discovered that milk tea shops were spread across the area. Therefore, she sought to build a brand to sell drinks made of Jingshan tea.

Last October, the first Lu Yu Brewing Tea outlet opened in the Dajingshan Scenic Area. A cartoon figure of Lu Yu is its public image. All of the drinks are made of minced Jingshan tea and fresh fruit. A second outlet is expected to open in January at Zhejiang Hangzhou Future Sci-Tech City. 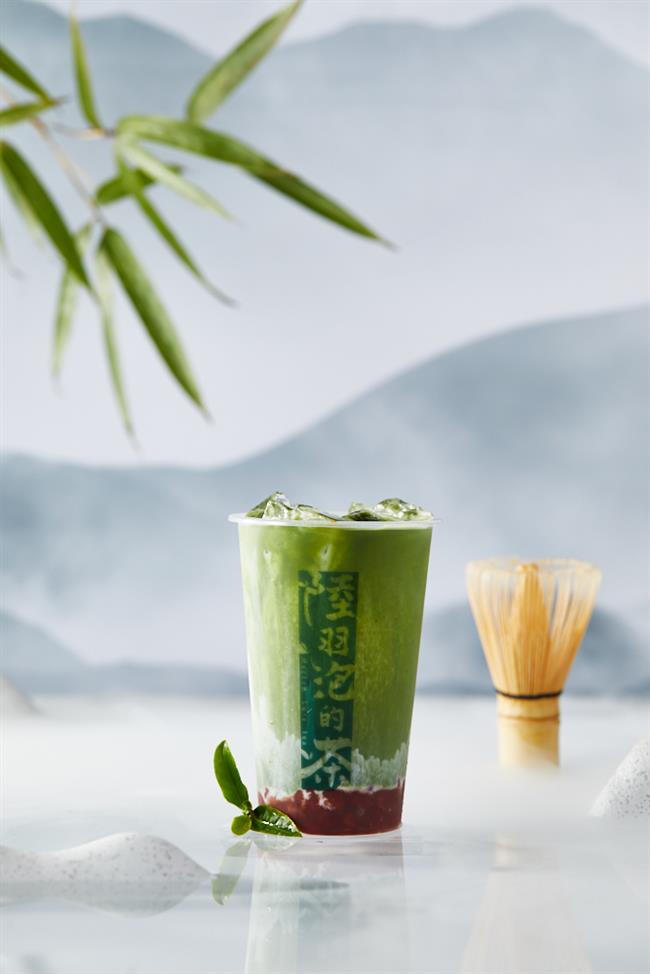 Drinks made by Lu Yu Brewing Tea outlet, which was opened last October in the Dajingshan Scenic Area. All of the drinks are made of minced Jingshan tea and fresh fruit. A second outlet is expected to open in January at Zhejiang Hangzhou Future Sci-Tech City.

Inspired by a traditional drink in Taiwan, Yu created a drink made of Jingshan tea and Chaoshan plums which tastes aromatic and refreshing.

Mount Chaoshan in Yuhang District boasts more than 50,000 plum trees and produces a large amount of fruit every year. The combination of two local specialties is popular with consumers.

“That inspired us. We could integrate Jingshan tea with more local produce. Unique features could make our drinks distinct from others,” said Yu. “Jingshan culture is the root of Yuhang District. We must adhere to our roots when developing creative products.”

Milk tea with the addition of these fruits are popular with tourists.

In 2021, her team plans to host more tourism promotions in Shanghai and other cities to attract tourists.

“I hope more and more people will know about Yuhang’s charm,” Yu said.

﻿
Special Reports
﻿
61761
,
Yuhang policy bears fruit in tea culture
An ancient king who carried cultural secrets to the grave
Old train stops at Dongxia to recall the good old days
As tourist stops go, one village is a different kettle of fish
Sanya a tropical paradise packed with scenic delights
Suzhou: an autumn paradise 'where dreams come true'
'Tis the season to venture out and relish 'the year's last, loveliest smile'
Holiday bummers: the overrated and the underwhelming
As watertowns go, a genuine gem sits in 'backyard of Shanghai'
Strolling along latest downtown attraction, finding nice surprises
EXPLORE SHINE