Western-style villas from a bygone era in Shanghai

Xinhua Road in Changning District has a paradoxical name. The word xinhua translates as the “new China,” which has echoes of the nation’s “red era,” but lanes along the tree-lined road are filled with historical Western-style villas.

Before the road’s name was changed to Xinhua, local residents knew the street as Anhesi Road, a homonym of its English name Amherst Avenue.

In 1925, Amherst Avenue and Columbia Road (now Panyu Road) were carved through what was largely farmland. That opened the door to real estate developers. Lanes mushroomed with villas.

Now, nearly a century later, I wander through the old lanes, trying to grasp some spirit of the past.

At the entrance of a blind valley, the characters meiquan bieshu are carved on the gate. The mottled black paint of the stylish calligraphy looks much older than the cleanly painted houses behind the gate.

Again, I find a seemingly strange juxtaposition between name and reality. “Meiquan” literally means “wintersweet flowers and springs,” of which I see neither.

Walking past the gate, I see a row of white villas on the left side of the narrow lane. Opposite them on the right side stand more grandiose-looking villas. Most of the gates are locked. One is being used by a musical society devoted to teaching the traditional Chinese instrument xiao, a type of vertical flute. 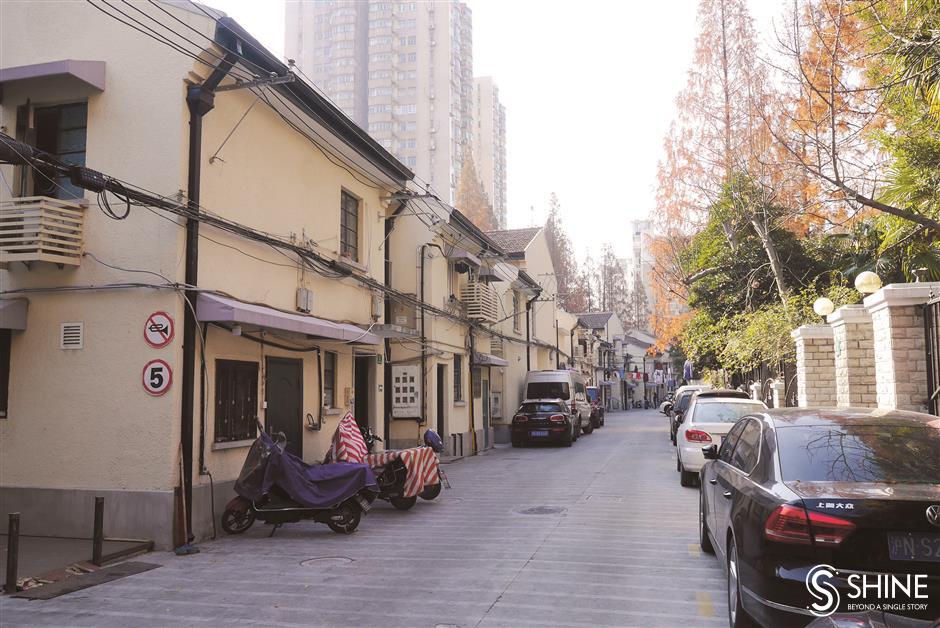 Xinhua Road in Changning District is full of old Western-style villas built about a century ago. Now they have become typical longtang, or lanes, in Shanghai. The Meiquan Villas is another one of them. While the lanes housed the wealthy when they were first built, today they are mainly shared by common people. 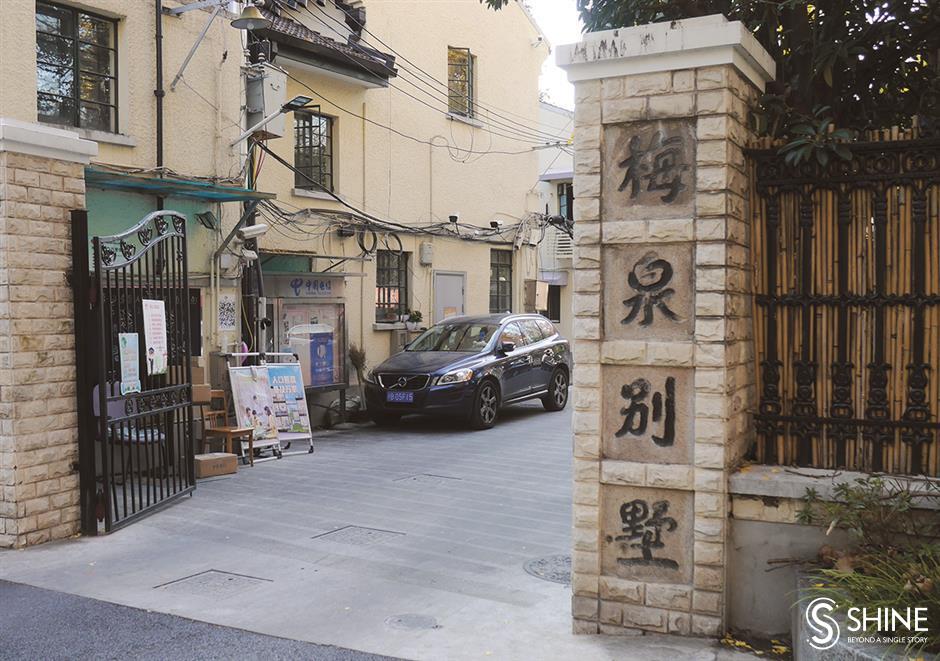 Most houses in the lane have stucco facades. I seem to remember hearing somewhere that stucco reflects sunlight in softer ways to create beautiful optical effects.

It’s true. The gentle light in the lane does warm me up on a chilly winter’s day. Most of the houses don’t have balconies. I imagine residents of old drying their laundry in the lane, and their clothes fluttering in the wind.

Designed by Xi Fuquan (1903-83), an architect who made many contributions to Shanghai’s appearance, the villas were among the first of the city’s luxury properties.

However, unlike the nearby Xinhua Villas, the Meiquan lane doesn’t seem to have attracted prominent people of the era. The only public figure who once resided here was a Kuomintang general named Zhang Junran, who reclaimed the South China Sea islands after World War II.

No. 20, where he once lived, is now shared by several families. The window frames look worn, and parking space is occupied by old junks. An open door allows me to peek into a kitchen, where two old men were busy doing something. I can see a stairway leading to the second floor.

I introduce myself to the two men.

“Not many original residents are left here,” one of them says, after telling me he doesn’t want his name published. “Most of the houses have been divided into apartments and rented out.”

He leads me to the end of the blind alley, where a much grander villa surrounded by a lush garden stands.

“This is the best building in the lane,” he says, “but it is always locked, and no one knows who lives here.”

The red-brick house, with white trim and balcony handrails, looks very different from other houses in the lane. Its locked black gate gives it an aura of mystery. The house has a rooftop garden, where shaggy branches poke out between the bars.

I later look up the house online and find it listed, along with two other villas in the lane. Maybe they will welcome new owners soon.

Before leaving, I ask my impromptu guide if he knows how the lane got its name. He points to a space between two villas that I have taken granted for a private driveway and see wintersweet flowers painted on a wall. There is a well-shaped mark on the ground.

“There was a small fountain here when the lane was first built, and wintersweet trees were planted around it,” the man tells me. “But I heard all that was destroyed during the ‘cultural revolution’ (1966-76).”

Aha! The lane is really worthy of its name. 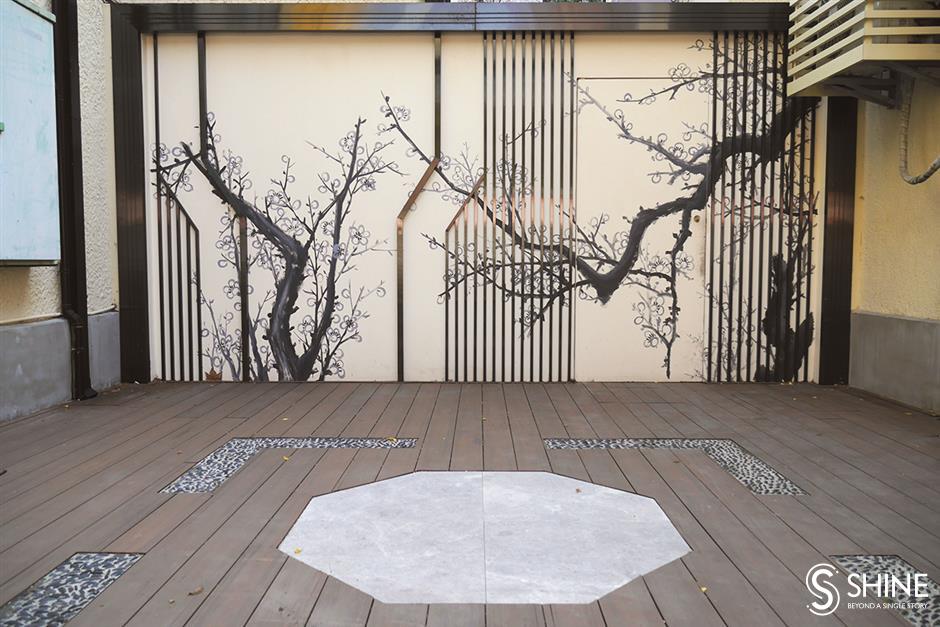 The site where a fountain and wintersweet trees once stood

I have heard a lot about this place. It was nicknamed the “foreign alley” in the past because it was full of Western-style villas and foreign residents.

The villas were designed by famed Hungarian architect Laszlo Hudec, who graced Shanghai with more than 100 memorable structures.

One of the villas is round in shape. Locals have nicknamed it the “cake house.” It does look a bit like a big birthday cake, minus frosting.

The house is the former residence of a Spanish envoy in Shanghai. Its high, black gate is locked, and its surrounding wall allows only a glimpse of the round roof.

Zhou Junshi (1892-1949), a former president of Tongji University, also lived in the house for some years after he finished school in Germany.

I see people burning paper offerings here and there in the lane. That makes sense. It’s the day of the winter solstice, reminding me that the lane is no longer a “foreign alley.” The villas may remain, but the occupants have changed.

Dawn redwoods line both sides of the lane, and late autumn leaves match the color of the red-brick facades. It would be a magical setting, I think, if it weren’t for all the cars parked helter-skelter in the absence of underground parking for residents. 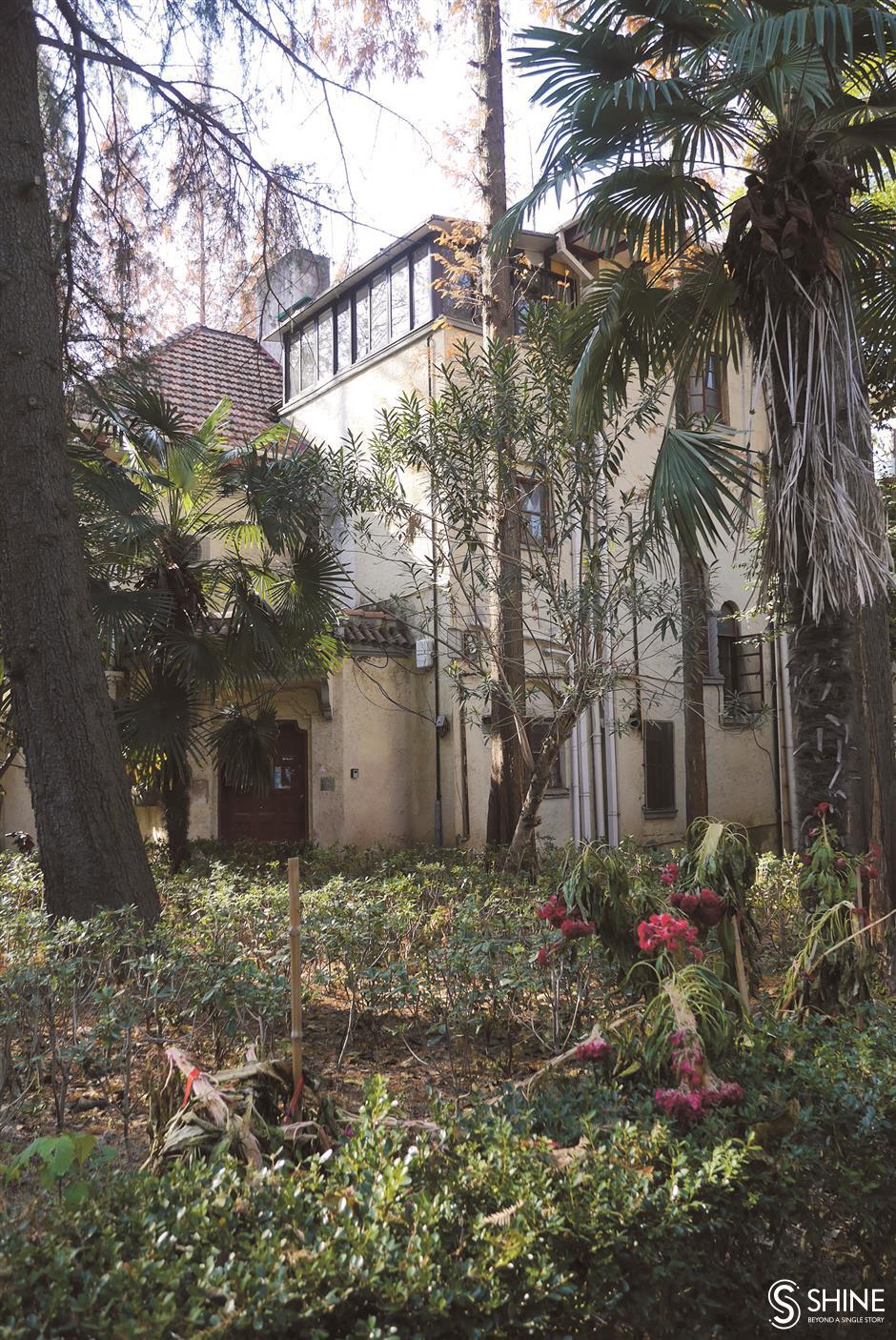 Some of the old lane houses have been upgraded with modern features.

A Dutch-style villa with a narrow door looks newly painted, like something out of a European movie. On the doorway there’s a sign: “No Photos.”

Deeper down in the lane, the gate to a creamy-yellow villa stands wide open, and two Egyptian-style cat statues stand on either side of the front door. A garden is still under construction. A monitoring camera on the gate watches me as I pass by.

Not far away, an old but stately house catches my eye. Its garden is full of weeds, and clothesline poles poke out from rusty framed windows. Ten mailboxes with different names on them are fastened to the fencing wall.

I wonder who owns the Dutch-style villa, who bought the Egyptian cat statues and who would be opening one of the 10 mailboxes before entering a house now in disrepair. Many people seem to share this lane, but I imagine the residents probably belong to different worlds.

Maybe someday the locked gates will be open again. And may all the residents have a bright future. 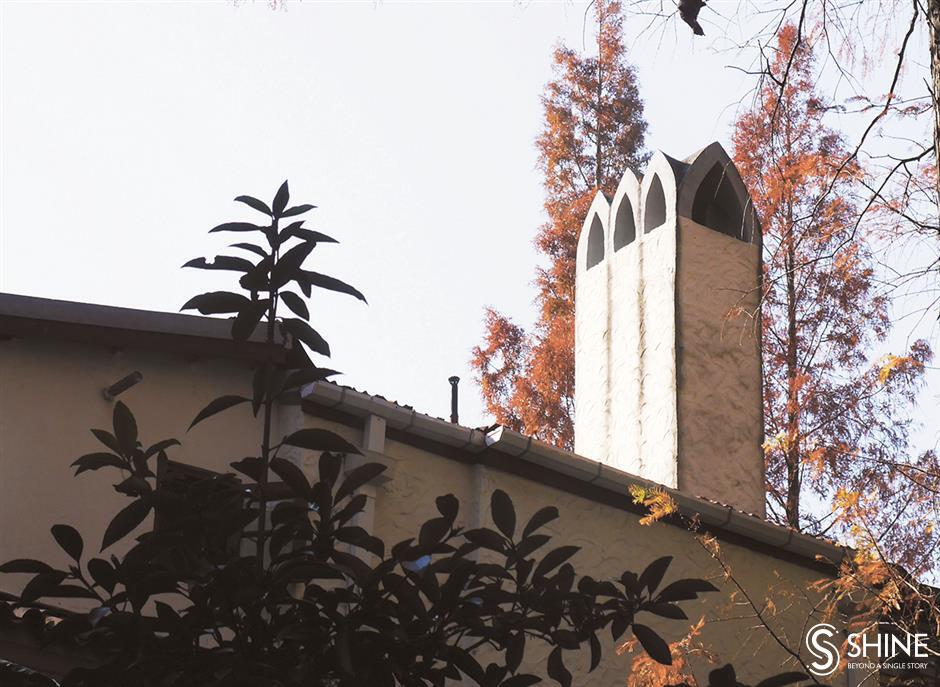 Gothic-style chimney tops are common on many of the houses in Xinhua Villas.

Special Reports
ADVERTISEMENT
62422
,
Western-style villas from a bygone era in Shanghai
Yuhang policy bears fruit in tea culture
An ancient king who carried cultural secrets to the grave
Old train stops at Dongxia to recall the good old days
As tourist stops go, one village is a different kettle of fish
Sanya a tropical paradise packed with scenic delights
Suzhou: an autumn paradise 'where dreams come true'
'Tis the season to venture out and relish 'the year's last, loveliest smile'
Holiday bummers: the overrated and the underwhelming
As watertowns go, a genuine gem sits in 'backyard of Shanghai'
EXPLORE SHINE