Let an umbrella be your smile! A town with plenty to be happy about

Luzhou in Sichuan Province is famous for its liquor brand but not for its tourism allure.

Yan wasn’t interested in buying a bottle of Luzhou Laojiao, a spirits brand that boasts a history of about 500 years. She was in pursuit of umbrellas.

“I don’t even remember the name of the character or the show, but the scene has stayed with me all these years,” said the 27-year-old. “I have been interested in oiled-paper umbrellas ever since.”

Fenshuiling, a small town within the jurisdiction of Luzhou, was her destination. It has an umbrella-making tradition almost as old as the popular local liquor. The local industry was fortified by the rainy climate and the rich supply of bamboo and nanmu evergreen trees whose wood is used in making the brollies.

“I heard that only workshops in Fenshuiling have retained the authentic old way of making oiled-paper umbrellas, using tung oil and a special technique of lithography,” Yan said.

Tung oil is extracted from the fruit of tung trees, which are widely grown in neighboring Yunnan Province. Lithography, which originated in Europe, was introduced into China in the 19th century.

The process involves drawing an image with oil, fat or wax on the smooth surface of a limestone slab. The stone is treated with a mixture of acid and gum arabic, etching the parts of the stone not protected by the grease-based image.

When the stone is moistened, a water-repellent, oil-based ink is applied. It sticks only to the drawing. The image can then be transferred onto a blank sheet of paper, producing a printed product. 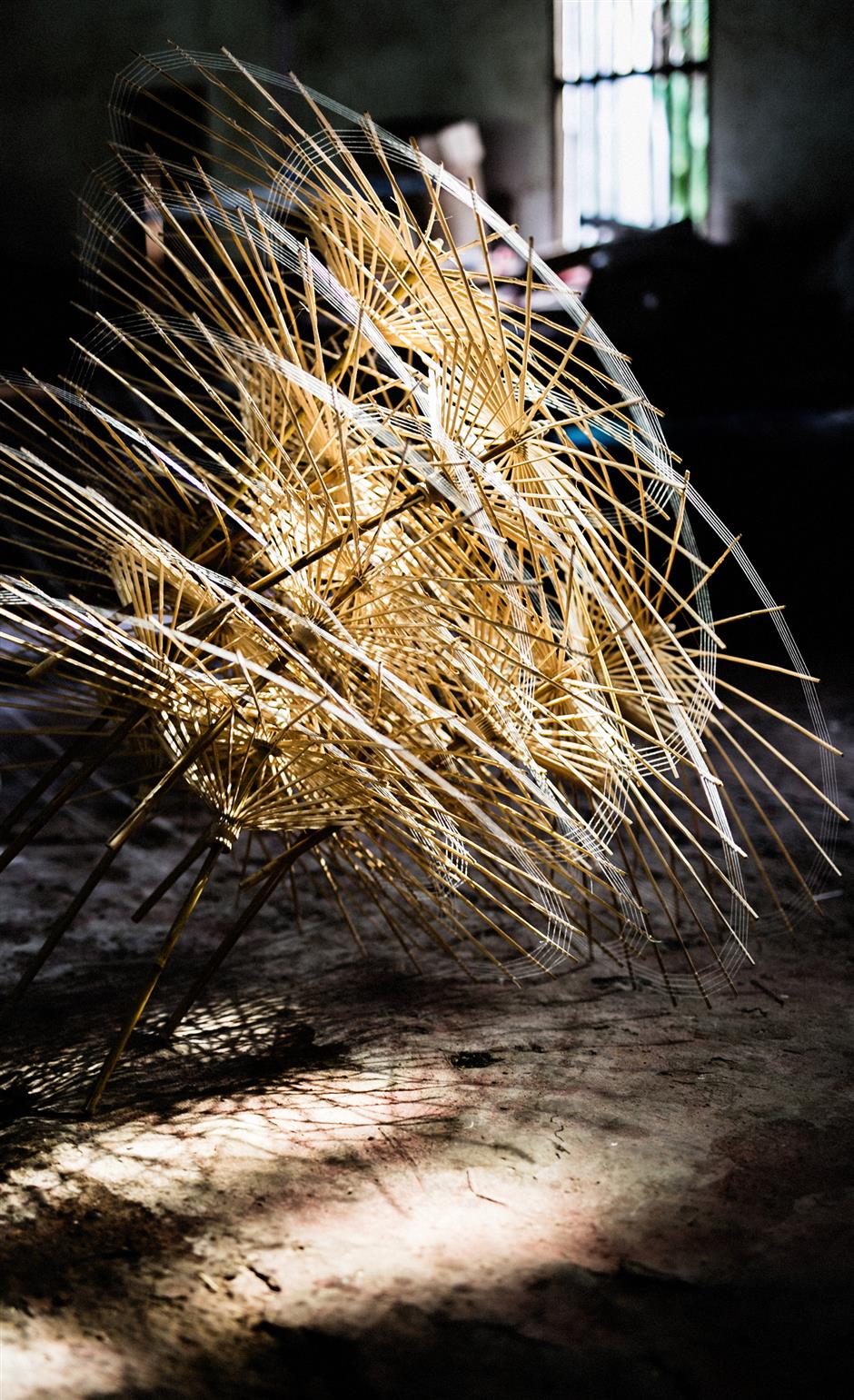 Ribs of oiled-paper umbrellas are stacked in a workshop in Fenshuiling, Sichuan Province, waiting for patterned paper to be stretched over them.

Several centuries ago, Fenshuiling was a commercial hub that distributed umbrellas, oil, tea and salt to Sichuan, Yunnan and Guizhou provinces.

When Yan arrived, she said it was obvious that the town’s heyday had long passed. The long, narrow main street was almost empty, and most stores were closed, except for several small eateries.

“There were a lot of trees — very big, very old camphor trees,” Yan recalled. “The trunks were so thick that I couldn’t see behind them. They felt like the souls of the town. Young residents of the town have left, but the trees still stand as a sentinel to their hometown.”

A busier and newer area of town called Sanli, or literally Umbrella Lane, has a recently constructed complex dedicated to manufacturing and displaying oiled-paper umbrellas. It includes a small museum about the umbrella tradition. 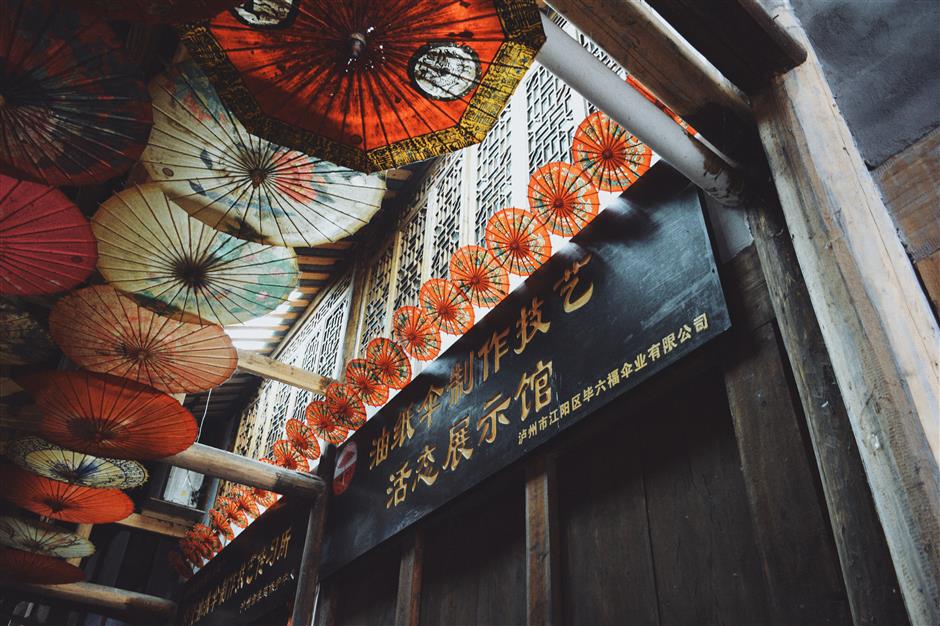 Yan said she was curious about local craftspeople continuing the cultural heritage. She found people of all ages, men and women, sitting in a lane outside, with half-made umbrellas in their hands.

They told Yan that it takes more than 90 steps to make an umbrella and that an authentic Fenshuiling umbrella can be opened and closed 3,000 times without the ribs breaking. The umbrellas can be soaked in water for 24 hours without falling apart. And users don’t need to worry about the umbrellas flipping inside out in a strong wind.

“They really had quick, dexterous hands,” Yan said. “I couldn’t figure out what the patterns on the paper exterior were before they were pasted them on the ribs, but within minutes they finished the pasting work and an image of a dragon and phoenix would appear. I don’t exactly know how they put the patterns together. It was like a program fixed in their minds.”

While they worked, the craftspeople told Yan about the history of oiled-paper umbrellas and how the tradition came to Luzhou.

Legend has it that umbrella was conceived by wife of Lu Ban (507-444 BC), an ancient structural engineer, inventor and woodworker who built many small street pavilions for people to take shelter in bad weather. His wife, surnamed Yun, was inspired by the shape of the pavilions and used it as the pattern for umbrellas.

Oiled-paper umbrellas produced in Luzhou became popular during the late Qing Dynasty (1644-1911) and continued to be in use into the 1940s and 50s.

During that heyday, Zhuzi Street near Xiaoshi Dock in Luzhou sold the umbrellas, and nearly 10,000 people were engaged in making them.

During her visit, Yan bought her dream umbrella. Its base color was red, patterned with white wintersweet blossoms.

She spent the rest of the trip, holding umbrella in hand and wearing traditional Chinese clothing, wandering around Luzhou taking pictures.

“When I changed into traditional Chinese garments and opened up my oiled-paper umbrella, I felt transported out of the modern world,” she said. 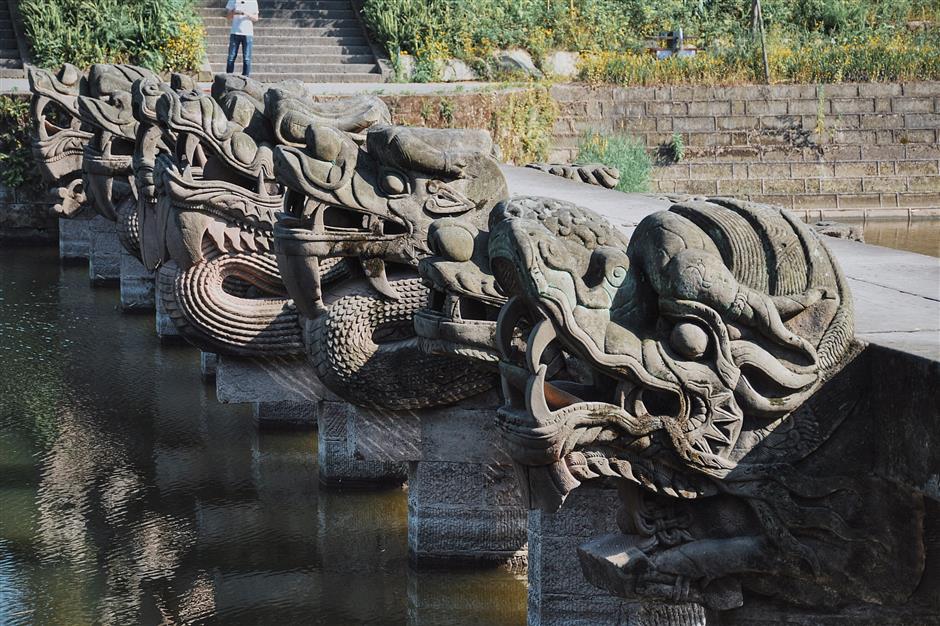 One of the areas she visited was Yaoba Ancient Town.

Unlike reconstructed ancient towns that look fake, Yaoba is often praised by scholars as a “living fossil of ancient Chinese towns.”

It has more than 2,000 buildings that are hundreds of years old, all well-preserved. A former commercial hub, its ethnic minority groups have left their marks in the town.

“There were few visitors or locals on the streets because of the cold, wet weather,” said Yan.

The old town has no newly painted walls nor highly polished roof tiles. Even the temple in the middle of the town has never undergone much restoration.

“It had very beautiful moss on the roof,” Yan said. “I had never seen a temple like that before.”

On her last night in Luzhou, Yan bought a small bottle of Luzhou Laojiao and opened it in the ancient-style hostel where she was staying. It was dark and overcast outside, with the feel of snow in the air.

Sipping the strong yet mellow spirits reminded her of a poem entitled “A Question to Liu Shijiu,” written by Tang Dynasty poet Bai Juyi (AD 772-846).

It goes: “My new wine has not been filtered, and there is a layer of green bubbles on the surface. A small stove made of red mud, used to heat the wine, is now ready. ’Tis dark and looks snow is foreshadowed. Would you like to stay and drink a cup with me?”

Special Reports
ADVERTISEMENT
Let an umbrella be your smile! A town with plenty to be happy about
Rainbow colors among sports park's green
What's on in Songjiang District in January
Western-style villas from a bygone era in Shanghai
Yuhang policy bears fruit in tea culture
An ancient king who carried cultural secrets to the grave
Old train stops at Dongxia to recall the good old days
As tourist stops go, one village is a different kettle of fish
Sanya a tropical paradise packed with scenic delights
Suzhou: an autumn paradise 'where dreams come true'
EXPLORE SHINE