An island park so close to downtown but still obscure

Unless you are looking at a map, it’s hard to recognize Fuxing Island as an island. In fact, it’s the only isle on the Huangpu River in downtown Shanghai.

Fuxing Island, which lies in Yangpu District in the northeastern corner of downtown, is connected to the rest of the district by two bridges and Metro Line 12.

When I visited the island during the Chinese New Year, a sense of tranquility washed over me. Its broad, straight streets are shadowed by the crowns of huge trees lining both sides.

There are some old red-brick factory workshops, now covered in ivy. It also has a popular bicycle route that attracts mainly local residents or people working in the factories.

The park in the center of the island is what drew me to the island. The Fuxing Island Park is believed to be the only Japanese-style park in the city. Online research found entries calling it “the most mysterious place in Shanghai,” and referred to “paranormal events” there.

However, I didn’t find any actual stories of the park being haunted.

The gate of the park resembles a torii, a traditional gate at the entrance or inside Shinto shrines in Japan. 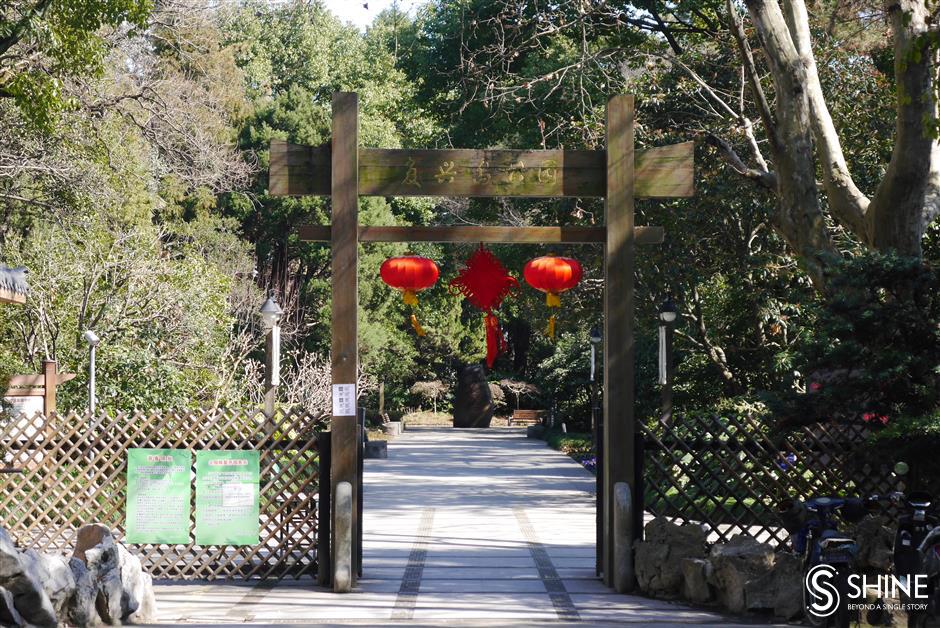 Walking through the gate, I find few other park visitors. This is a park unlike most others in Shanghai. There are no cleanly mown lawns or fancy floral landscapes. Few mothers are pushing baby strollers; nor are senior citizens dancing to loud music. There is just solitude.

Huge trees and rich shrubbery indicate the park has been there a while.

In 1926, what was then called Zhoujiazui Island was created when a man-made canal separated it from the city land mass. Four years later, the park was created as the garden of a sports club for the then city dredging administration.

After the Japanese army invaded Shanghai in 1937, the entire island became a restricted zone, serving as a residence for various military leaders. It was renamed Dinghai Island. According to local residents, the Japanese military even built a runway along what is now Gongqing Road, which may explain why the road runs in such a straight line through most of the island.

Today one road and one of the bridges to the island still bear the name Dinghai.

The occupiers changed the landscape, layout and vegetation of the park, creating a Japanese-style garden and planting a profusion of cherry trees.

Walking further into the park, I come to a pavilion on a pond. This is probably the most “Japanese” part of the park. The pavilion and the pond water covered by thick, green duckweed and high trees behind it formed a view I once saw in gardens in Tokyo and Kyoto. 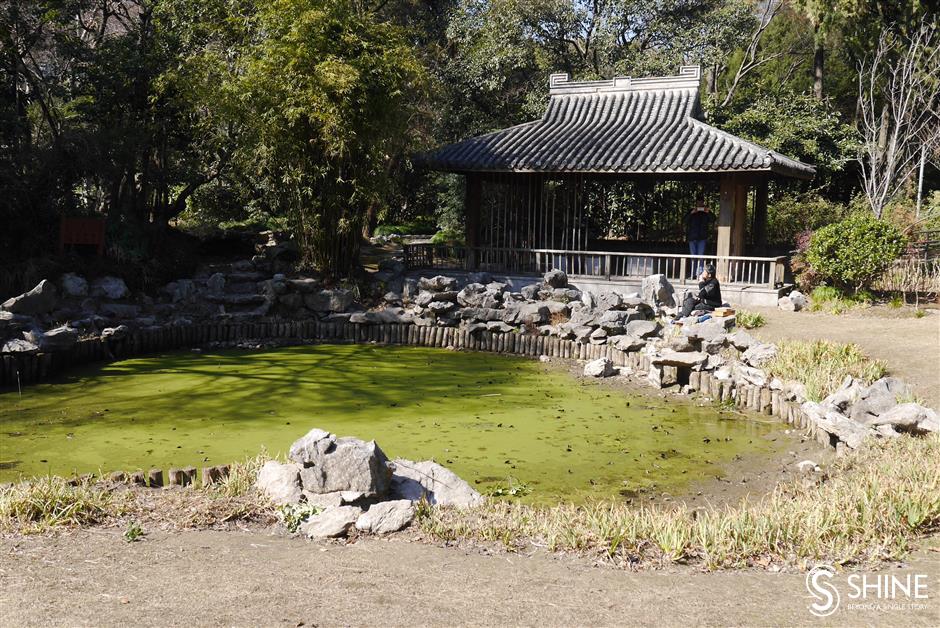 Japanese troops in the 1930s took over the park and renovated its landscape with touches of home, including a pondside pavilion.

A man is playing a harmonica beside the pond. The pitched tunes, which are reminiscent of grand Soviet-style songs, remind me of the World War II era. Somehow, the music captures the atmosphere of a cold, winter day.

The harmonica player tells me he lives nearby and playing in the park is his daily routine.

“It is always quiet here,” says the man, who is in his 60s and asks that his name not be used.

“Even during the cherry blossom season,” he went on, “you don’t see many visitors here. I don’t think many locals know about this place. You don’t see it on TV. When cherry blossoms open, everyone talks about seeing them in Gucun Park. It’s actually a good thing.”

The man leads me to a white house hidden in one corner of the park, behind a copse of trees. It’s called Bailu, or White Cottage.

“Chiang Kai-shek stayed here before he fled to Taiwan,” he tells me. “It’s not open though, but it’s the real thing.”

I check Bailu online. What the man told me is true, though Chiang, former Kuomintang leader, didn’t stay long in the cottage.

It’s a building combining both Japanese and Western styles. With an octagonal pavilion attached to the main building, the house resembles a common American suburban home with a Japanese-style rooftop and cornices.

Indeed, the harmonica player is correct. The house is locked, but the curtains in the pavilion leave a gap so I can peek through. There is no furniture left, but a fireplace opposite the window still looks cozy even though the home has been sealed for more than half a century.

Records show that the cottage was first built with the garden. During the Japanese occupation, more Japanese features were added to the cottage.

What Chiang precisely was doing in the cottage is undocumented, but stories abound.

One tale goes that Chiang used it as a command central for all military actions just before liberation in 1949. It also claims that a secret passage under the cottage allowed him to come and go without passing through the front gate.

No such passage was actually found during later restorations, despite the persistent rumors that Chiang always had a “backdoor” exit everywhere he stayed.

Another story, more accepted by historians, is that Chiang arrived at Wusong Port in Shanghai on April 26, 1949, and left the city on May 25 — and never came back. It holds that he spent his last night in Shanghai in the cottage.

After the establishment of the People’s Republic in 1949, the park was restored several times. Many of the wartime relics are gone, including a monument in memory of the victory against the Japanese.

A place that once figured in history has been relegated to a quiet obscurity. I left the island feeling that the park is finally at peace in a peaceful era.

Fuxing Island can be reached by Metro Line 12. The park is 400 meters north of the subway station on Gongqing Road.

Special Reports
ADVERTISEMENT
An island park so close to downtown but still obscure
Hangzhou enticing non-natives to stay put over holiday
New look and a new life for the old street
Let an umbrella be your smile! A town with plenty to be happy about
Rainbow colors among sports park's green
What's on in Songjiang District in January
Western-style villas from a bygone era in Shanghai
Yuhang policy bears fruit in tea culture
An ancient king who carried cultural secrets to the grave
Old train stops at Dongxia to recall the good old days
EXPLORE SHINE