Yan'an Road M., a busy thoroughfare in Shanghai, is overshadowed by an elevated highway above. But how many come-and-go commuters and pedestrians have ever visited Xuyuan along the road?

Certainly not me. I had no idea the garden near my place of work even existed, though I must have passed its gate more times than I can remember. And if it weren’t for a mistake on a map I was using to find a nearby destination, I might never have visited it.

On the wall of the British-style villa, a plaque reads: “Xuyuan. Old Site of the Shanghai People’s Acrobatic Troupe.” 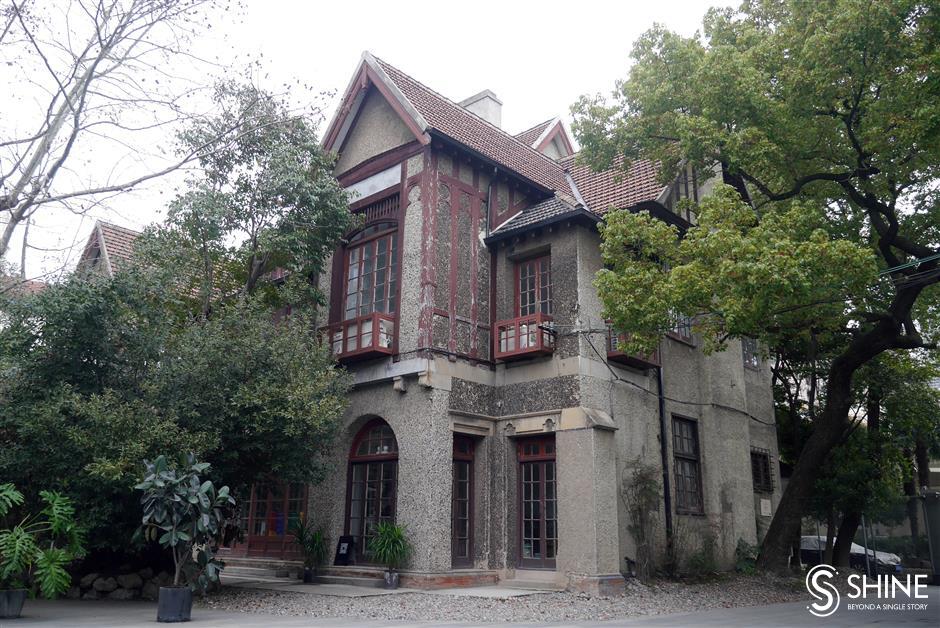 The British-style villa was once home to an acrobatic troupe.

Walking in, I find a small Chinese-style garden. It is quite untended, but I can tell that it has been there for a long time because of the weathered rockery and thick trees.

My curiosity is piqued, so I look up the site online. The Internet informs me that the garden, whose name literally means “the garden of warmth,” was built in the 1920s-30s era.

The garden was originally part of a mansion belonging to financier Hong Zhenliang. His name might not ring a bell with Shanghai locals, but they may well remember his son Hong Junyan, whose marriage was news.

His wife was Zhang Hanzhi, a diplomat and an English teacher to Chairman Mao. Their daughter is the writer and journalist Hong Huang. The couple divorced in 1973.

The original staircases of the villa are well preserved.

The British-style villa belonged to the Hong family. Though its architecture is Western, the garden is designed in the Chinese style so popular with the wealthy back then. Not far away is the similar Dingxiang Garden in Xuhui District.

Xuyuan is quite tiny compared with mansion gardens in city suburbs and neighboring provinces. It reminds me of the Chinese saying: “The sparrow may be small, but all its vital organs are there.”

The former owner of the garden was perhaps a fan of Shizilin, or Lion Grove Garden, in the city of Suzhou known for its variety of rockery shapes. In Xuyuan, one corner is covered by a rock formation with a tunnel. Walking through a dark and winding path to a small pond, I come across another rockery.

A stone bridge over the small pond is delicately carved, with eight stone lions wearing different expressions, sitting on the railings. Some of the lions have deteriorated so much that their faces are obscured. 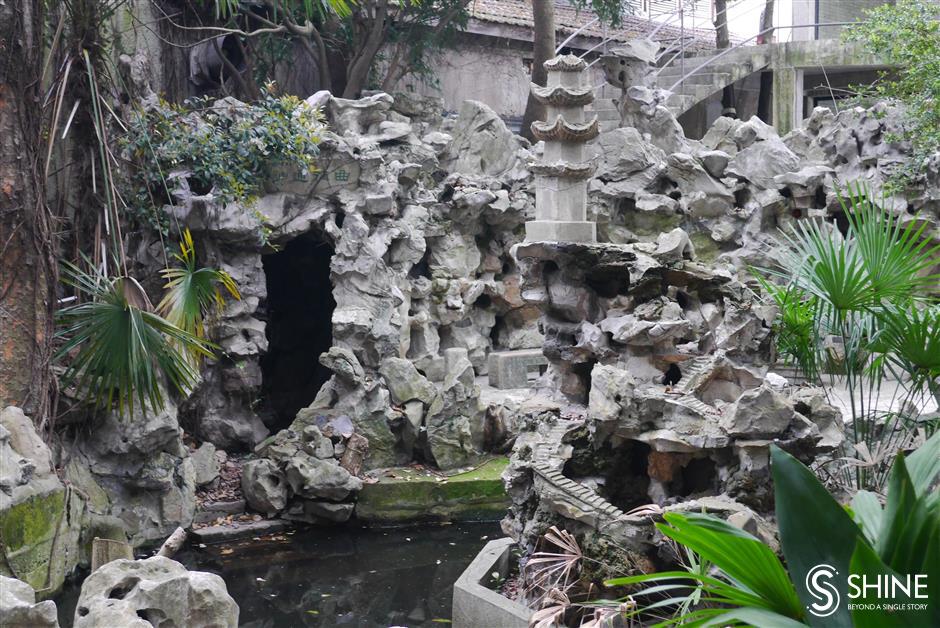 Rockery contains a tunnel to the central pond in the garden.

Across the bridge, there is a wooden pavilion almost completely concealed behind overgrown greenery. Its roof tiles are covered in thick moss, just like the passageways in the garden, and the paint on the carved beams has faded.

Still, to me, this weathered old pavilion is much more beautiful than newly painted, brightly colored ones in other gardens. 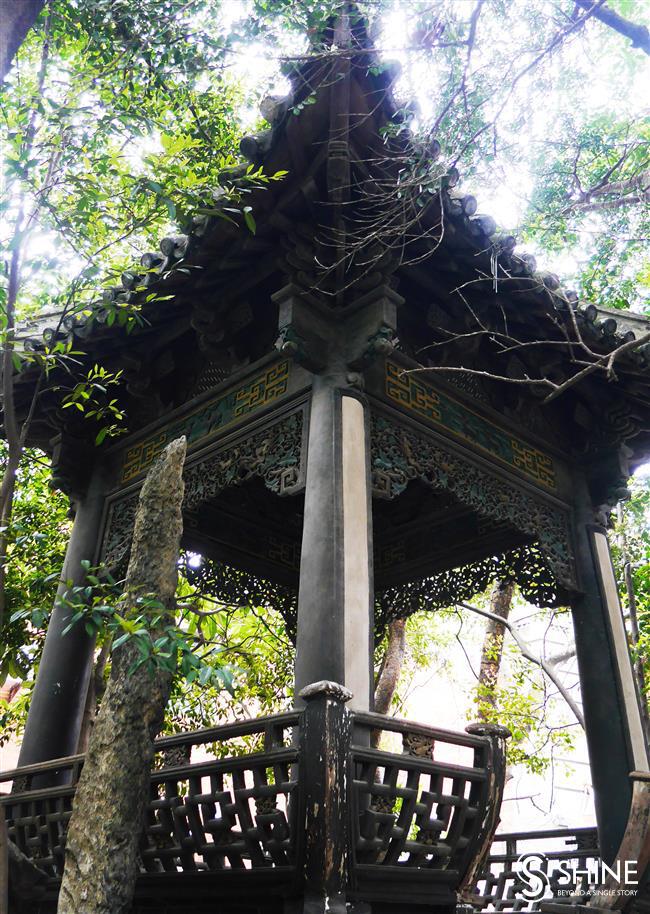 A pavilion in the Xuyuan garden resembles a jungle ruin.

After the Hong’s family vacated the villa, Xuyuan was taken over by the Shanghai People’s Acrobatics Troupe, formed in 1954. The villa rooms were used for training and practice. A mottled plaque carved with the name of the troupe still hangs on a corner of the villa façade.

The troupe stayed in Xuyuan for more than four decades, until it moved to Shanghai Circus World in the former Zhabei District in 1999.

Cheng Haibao, a former acrobatic performer who once lived in nearby Cihuinan Lane, recalls visiting Xuyuan many times before he joined the troupe as a trainee. Back then, he says, being amid the rockery, stone bridges and pavilions made him forget that he was in the center of a big metropolis. He says he felt completely in tune with nature there.

“I especially loved the trees and flowers there,” he says. “Two ginkgoes and two southern magnolia trees were more than 100 years old, I believe. And there was a lilac bush that always emitted a sweet fragrance when it flowered.”

The rooms in the villa were equipped with all facilities for acrobatic training. Wooden floors provided elasticity, and training ropes hung from the beams. Even today, some remnants are still in the villa.

Cheng recalls that the troupe had very strict rules for young trainees. They were allowed to return home only once a week. He said he often stood by the gate of Xuyuan, looking over at Cihuinan Lane and feeling homesick.

He remembers a huge tree just beside the gate, which to him marked the border between the world of the troupe and the world outside. He says he sometimes circled the tree many times, debating whether he should cross the boundary and break the rules to go home. He never did.

The tree in Cheng’s memory is now gone, replaced by a keeper’s lodge next to the gate.

The entrance of the villa is often open. Visitors can either sneak in to have a look around or negotiate with the keeper to enter. Although some of the rooms are now used as offices for a magicians’ association, the layout of the house has not been changed.

As I walk out of the gate, the elevated road above Yan’an Road M. dominates the scene once again. I understand Cheng’s feelings as a child. It sort of feels like the tiny garden doesn’t belong there.

Maybe one day Xuyuan will be rehabilitated by the government or by some real estate developer, but for now it’s just as it always was. Delightfully so.

﻿
Special Reports
﻿
Obscurity lends magical charm to an old villa garden
Restored admiration for Zhu family in Songjiang
An island park so close to downtown but still obscure
Hangzhou enticing non-natives to stay put over holiday
New look and a new life for the old street
Let an umbrella be your smile! A town with plenty to be happy about
Rainbow colors among sports park's green
What's on in Songjiang District in January
Western-style villas from a bygone era in Shanghai
Yuhang policy bears fruit in tea culture
EXPLORE SHINE