Just an hour from the city center, the graceful elder sister … 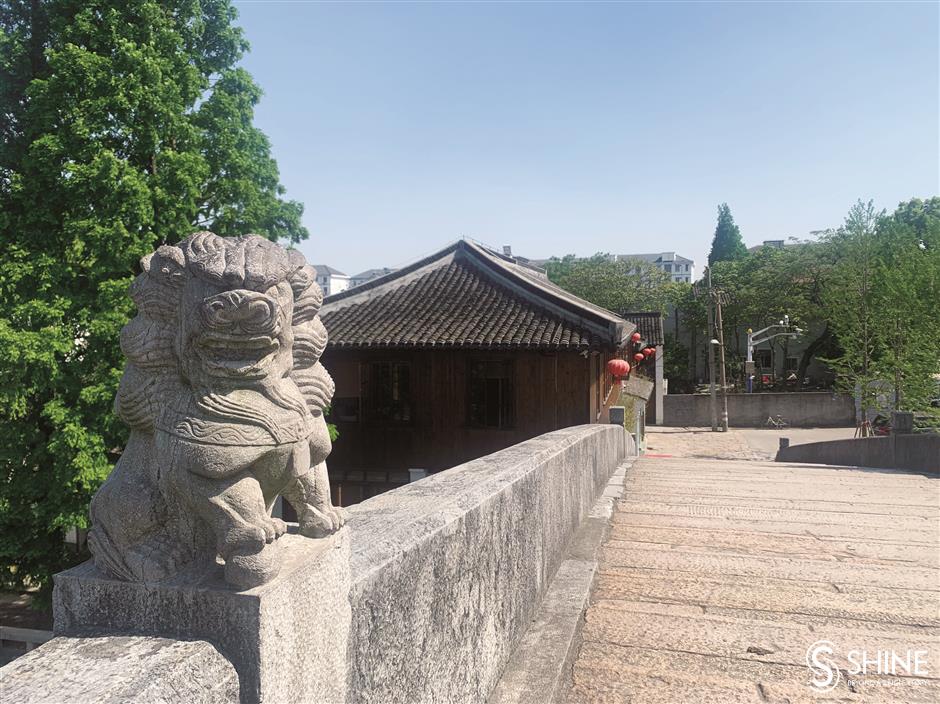 A stone lion on Dacang Bridge

Downtown Shanghai’s reputation as an urban jungle is well earned with its towering concrete buildings and chaotic traffic. The metropolitan excess can frustrate and tire even the most citified person.

This side of Shanghai is like a rash, frenetic teenager, always filled with dynamism and great ambition. However, sitting quietly in his shadow, within one hour drive from the city center is Cangcheng Old Town, Songjiang District, home of the graceful, placid elder sister.

Here the charming countryside is dotted with historic cottages and is full of fresh air; it is a place where imprisoned city dwellers can break out of the concrete jungle and have a moment of peace.

By enjoying a show of Kunqu Opera in the Yiyuan Garden, sipping a cup of green tea in the tea house and exploring the past glory in ancient wood-carving buildings, people will be able to recapture the old days of the town.

As one of Shanghai’s 44 historic and cultural sites, the ancient Cangcheng, formerly a busy shipping center in Songjiang’s Yongfeng Community, has just gone through a major facelift. But luckily, the renovation project still keeps the old town’s true flavor with proper, cautious moves.

“We have been given enough time to think about how to develop without destroying the heritage at the same time,” said Zhou Xia, deputy manager of Cangcheng Old Town Development Ltd.

The resulting facelift is worth a visit. Walk along cobblestone streets and over stone bridges. Admire architecture dating back to the Qing Dynasty (1644-1912). Walk through mansions where celebrities once lived. Stroll in traditional gardens. Eat in restaurants serving age-old specialties.

Some residents have been relocated, and some still live on the old street, leading a quiet village life. There are barber shops, hardware stores and lingerie shops, which suggests the ancient town is still alive, but not yet too commercial.

In fact, the renovation has been going on for more than 10 years. “We haven’t got a firm timetable when the whole project will be finished because it’s quite a complicated, demanding and time-taking job to restore all the ancient architecture,” Zhou said. A recent survey showed that Cangcheng, covering almost 80 hectares with a core zone of 19.5 hectares, has 127 cultural heritage sites which cannot be relocated, removed or re-decorated.

The town that boasts abundant waterways reached its heyday during the Ming Dynasty (1368-1644) as a grain shipping center and storage site of rice from the southern banks of the Yangtze River. The word “cang” means “rice barn.” The town’s crisscrossing rivers and canals connected with the sea. Houses, temples, bridges and shops were mushrooming along the canals at the time.

Spanning the Shihe River in the old town’s eastern tip, the stone bridge, 54 meters long and 8 meters high, has witnessed the place’s twists and turns for almost 400 years. It was once a five-arch construction, but became three arches after two at both sides had been silted up.

High up after taking 92 steps to the top of the bridge, people can have a panoramic view of the ancient town. The four stone monsters at the top, vividly carved, are glaring to east and west like the bridge’s guardian angels.

In 2002, it was subject to a renovation and dredging project. Construction workers found a stone tablet at its northern end. As long as 1.7 meters, the stele was carved with auspicious clouds but most of the engravings had weathered beyond recognition. 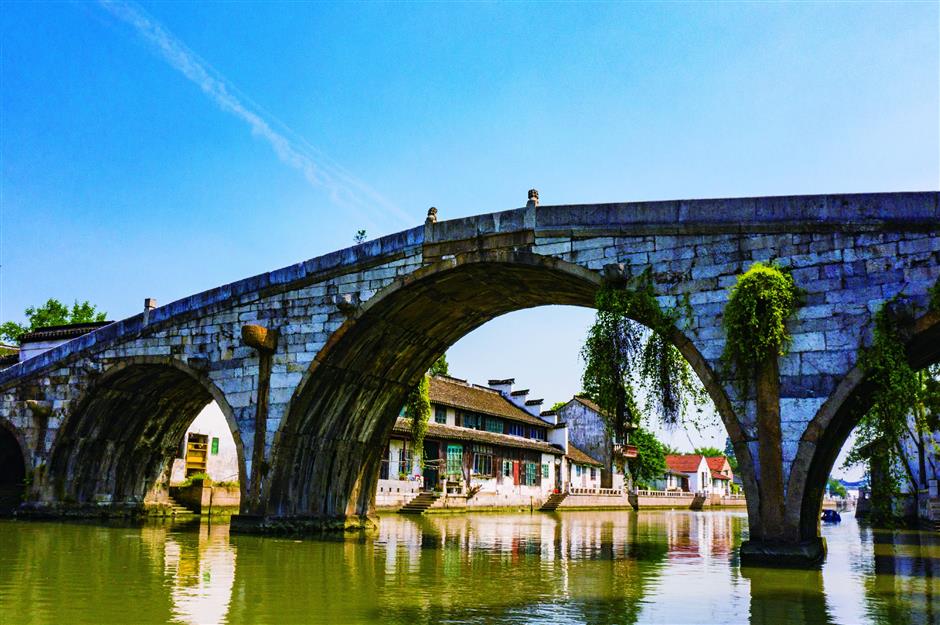 Sitting by the river, the rice shop built in the early 1900s was once the busiest place in the town.

In the Qing Dynasty (1636-1912), the Songjiang government (Shanghai in old times) imposed almost 25 million kilograms of grain levies by shipping, and more than half of them were stored in Cangcheng. When hundreds of boats loaded with grain set off to the capital, there was a grand ritual to be held each time at the riverside, thronged with officials, sailors and locals, who expressed wishes for a safe journey for the fleet.

Zhang’s Rice Store was also a grain barn. It was designed with many transom windows for ventilation, which prevented mold and insects. The northern room was where rice was milled.

Today the building has reopened as an exhibition hall of Songjiang rice culture. Various old-fashioned rice tools to weigh, grind and cook rice are on display. Visitors can also roll up their sleeves to beat cooked rice paste to make it more glutinous, and taste the fruits of the hard work. 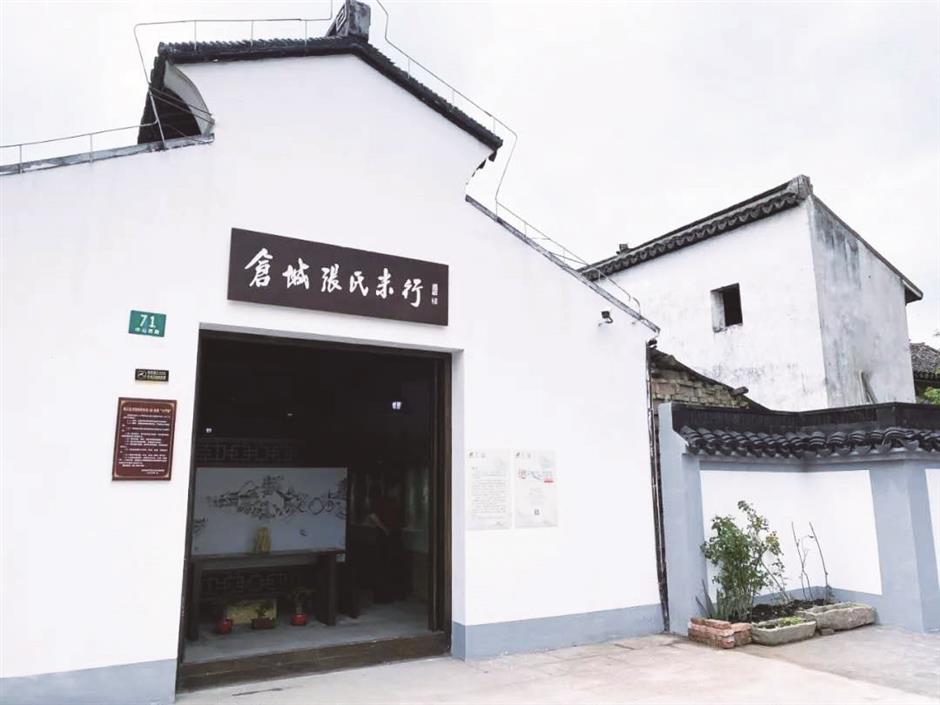 The house of the exhibition hall was built during the late Qing Dynasty and renovated in the Republic of China (1912-1949). Today it’s a showroom of Songjiang’s homespun history and culture.

Songjiang is known as the hometown of Huang Daopo (1245-1330), a somewhat unsung pioneer in China’s early textile industry, who improved the techniques of weaving and spinning fiber, and passed her three decades of weaving experience on to Songjiang women, enabling villagers to make suits and fine silk clothing at home.

It displays hundreds of old Songjiang homespun with varied patterns, styles and colors. Most of them are collected from old locals, some fabrics dating back a century ago.

“As it was a handcraft passed down from mouth to mouth without written records, today few can weave,” said Yang Panhong, the exhibition center’s director.

Though old-fashioned, the homespun fabric is so stylish from a current perspective. With clever tailoring, it is cut and sewn into purses, toys, key rings, book covers, men’s suits and qipao, the body-tight Shanghai women’s dresses.

“It might be the way for Songjiang homespun to come to life again, when we add them into modern fashion in a proper, artistic way,” Yang said. 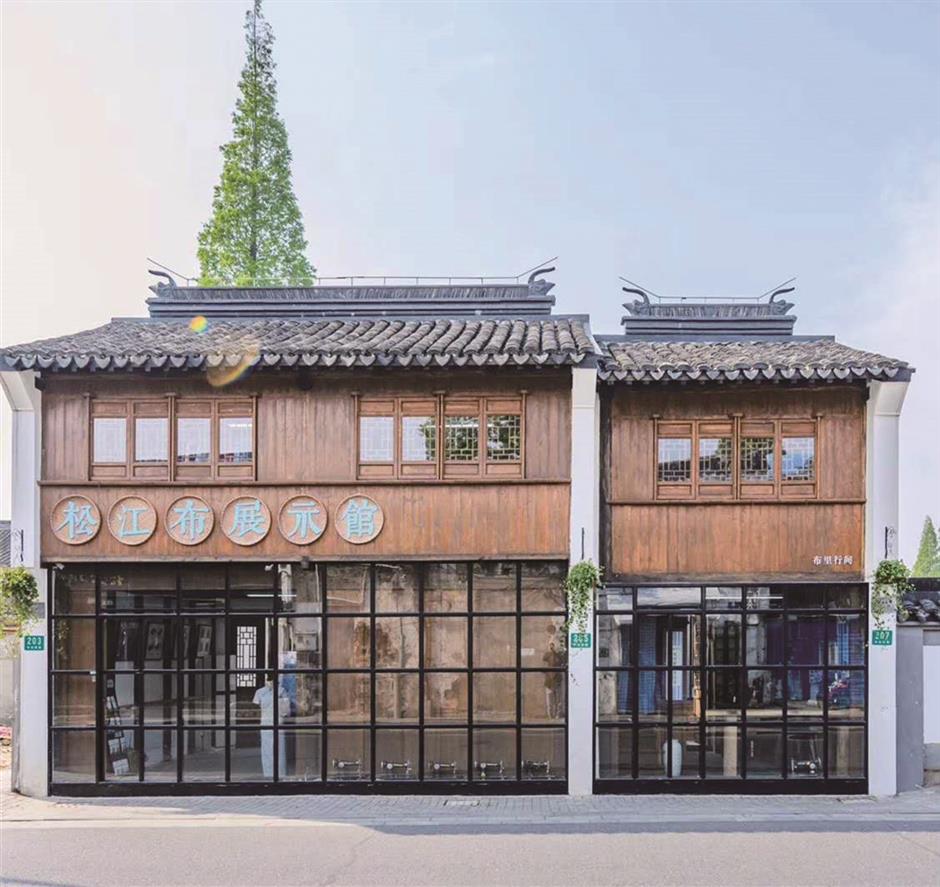 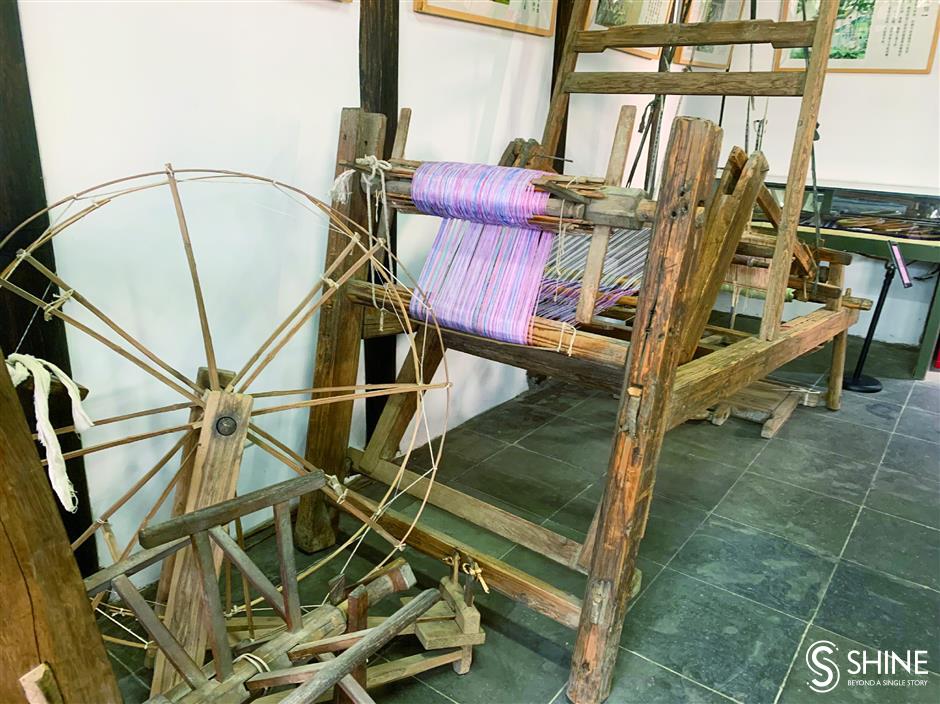 The house with one side overlooking the Shihe River was typical Qing-style architecture. The roof in the main hall was designed like the matting cover of boat, a distinctive feature of a residential house in the southern bank of the Yangtze River.

The highest roof beam, in an arc shape, is also called a moon beam as it looks like the new moon. It was commonly seen in north China’s wooden houses in the Song Dynasty (960-1279), and soon became popular in south China.

Today the building has become an art gallery with coffee shop and tea room, but still keeps the original architectural details. The artist Zhang Ming designed the space into a mind-soothing getaway, with free art exhibitions. 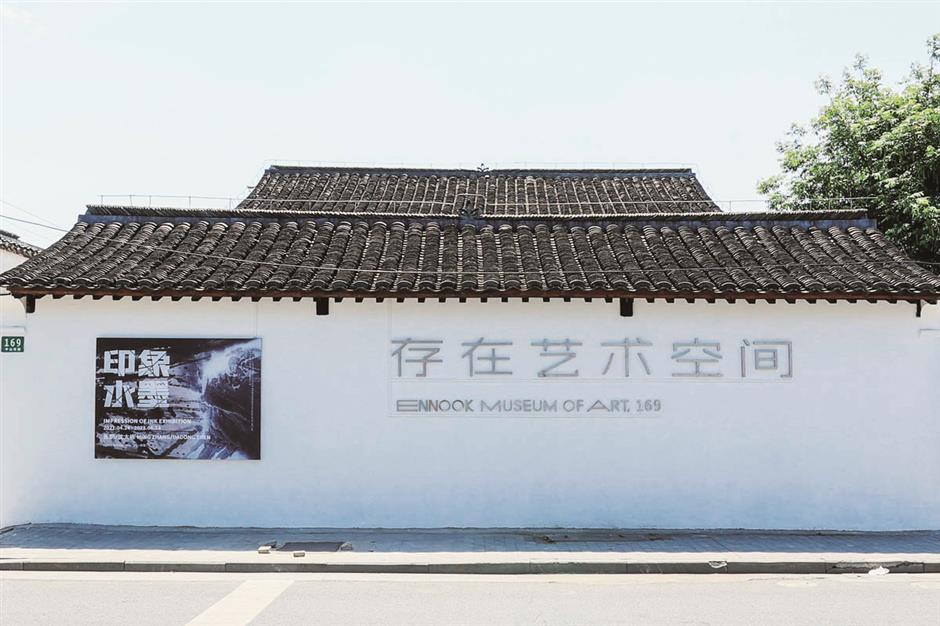 Du’s wood-carving mansion is a good example of proper use of heritage. Sitting quietly on the north side of Zhongshan Road W., the wood-and-brick building was established during the Qing Dynasty (1644-1911) by its original host and landlord Du Lingmei. It is famed for its various delicate carvings on the doors, windows, pillars, staircases and handrails.

The essential part of the house is in its third courtyard, which was built as a marriage suite for one of Du’s descendants.

It is supported by large wooden columns and connected by the sun mao technique — a variation of the mortise-and-tenon joint that uses no nails or glue. The roofs are in the traditional “horse head” style, which is shaped like a galloping horse and used to block fire from spreading.

The compound exhibits elegant touches of white-painted walls, grey bricks and deep green tiles. Walking into the main hall, one would be struck by the rich carvings that explode before the eyes.

The doors and window frames are engraved with patterns of flowers and animals, while the beams and pillars are carved with depictions of clouds, mountains, waters, mythological figures and historical heroes.

The glass used on the widows was made of clamshells, all imported from Europe, because at that time China didn’t produce glass.

At the back of the complex a small pathway leads to a private, tranquil garden area.

The mansion is now a folk arts center and a base for the district’s almost 20 intangible cultural heritages. Folk artists give performances such as dragon dances, Songjiang embroidery demonstrations, shadow plays and lantern dances in the house’s backyard during festivals and holidays.

In addition, more than 200 pieces of wooden furniture from the Qing Dynasty collected from the villages are on display, open for free to visitors. 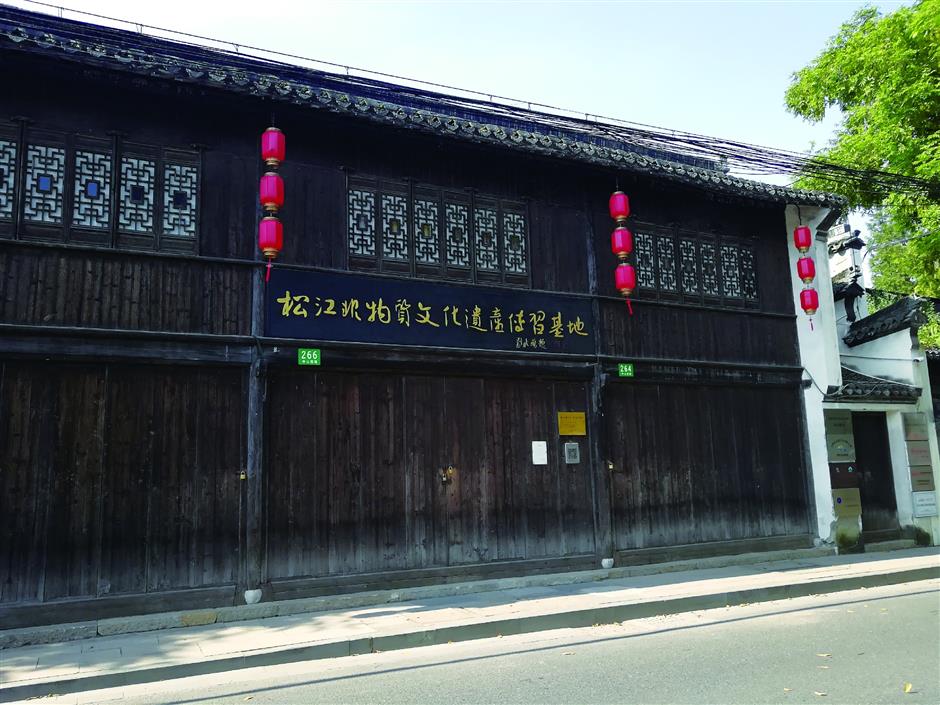 ﻿
Special Reports
﻿
61771
,
Explore the charm and romances of the West Lake
Celebrating the majesty of the Grand Canal
The hosts roll out the welcome mats. Where are the guests?
New corridor to promote tourism, environment
Greece ― a year-round holiday destination
Armchair excursions: touring the city without leaving home
A trip to yesteryear along Metro Line 16
Transportation gateway to Hangzhou's rich history
Metro Line 9, a gateway to Yuhang's many splendors
Walk back in time on Hangzhou Metro Line 7
EXPLORE SHINE