The annual Wushan Hill Hydrangeas Festival is now in full swing, with the blossom predicted to last through early July.

For years, the management committee of the Wushan Hill Scenic Area has introduced new varieties of hydrangeas from other countries. Now, a total of 101 varieties from home and abroad dot nooks and footpaths in the area. 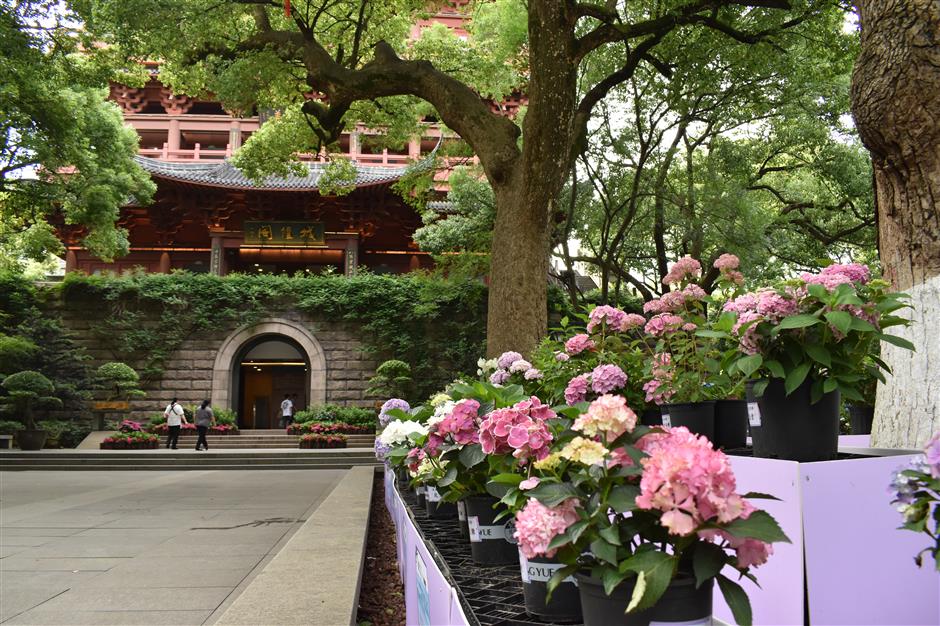 A hundred and one varieties of hydrangeas from home and abroad dot nooks and footpaths. 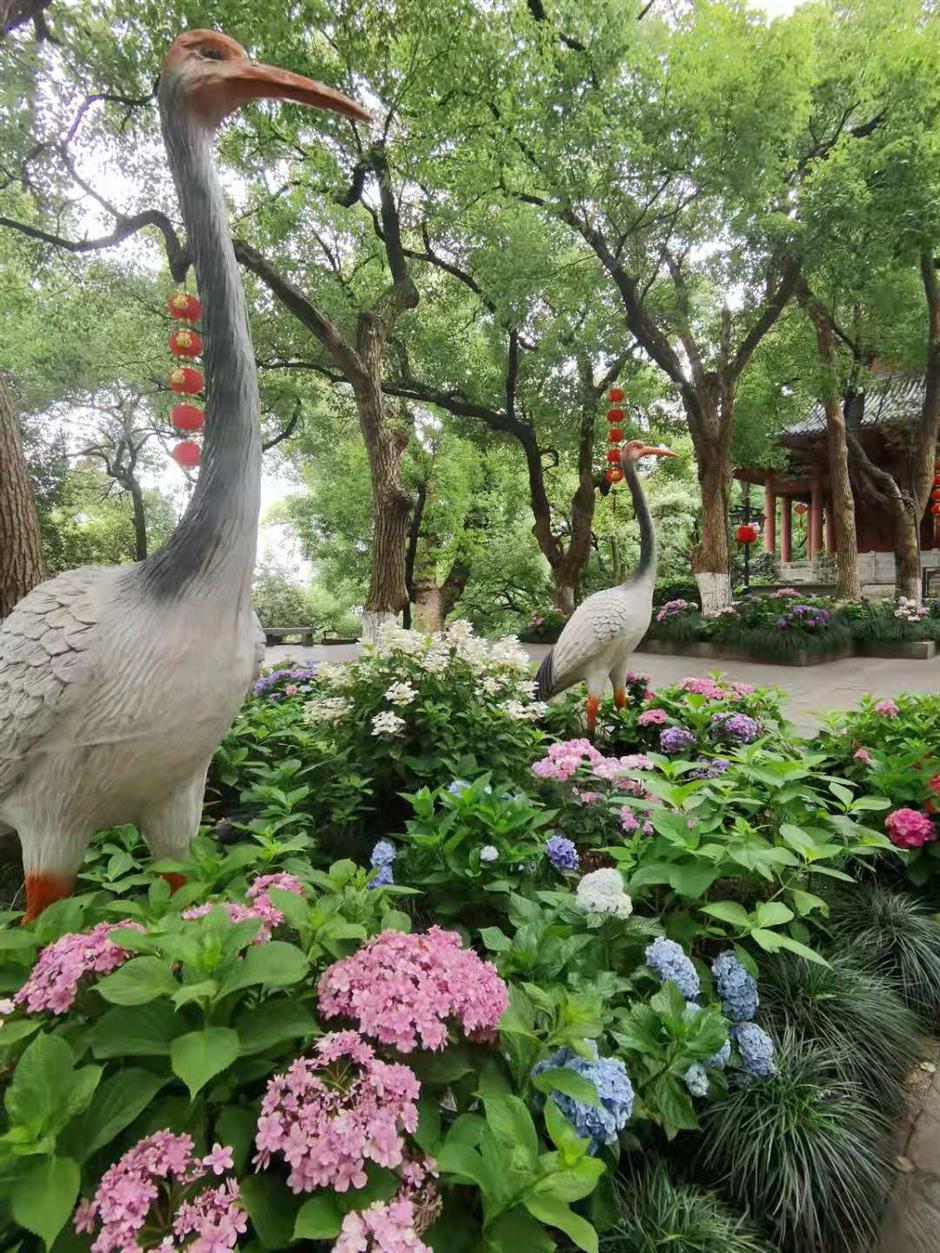 Organizers have set up a path flanked by vibrant flowers and cultural heritage.

Hydrangeas become wanghong (Internet celebrities) every summer in Hangzhou. The petal colors vary according to the relative acidity of the soil, ranging from pink and blue to white and red.

Chinese people name them baxian (literally "eight immortals") flowers, endowing them with poetic elements. In Hangzhou, hydrangeas are some of the most common ornamental flowers in urban areas.

This year, organizers have set up a path flanked by vibrant flowers and cultural heritage – starting at Liangdao Hill and ending in Sanmao Pavilion – offering visitors a summer weekend getaway.

Liangdao Hill is where the Ming (1368-1644) and Qing (1644-1911) dynasties established royal management departments for agriculture.

Ascending along the hill path, people arrive at Chenghuang Pavilion, considered the best spot to view the city's panorama.

The pavilion is open at night, so it's worth checking out for sunsets and nighttime views.

It's also the best place to enjoy a fresh mountain breeze. At night, the illuminated pavilion is a Hangzhou landmark. 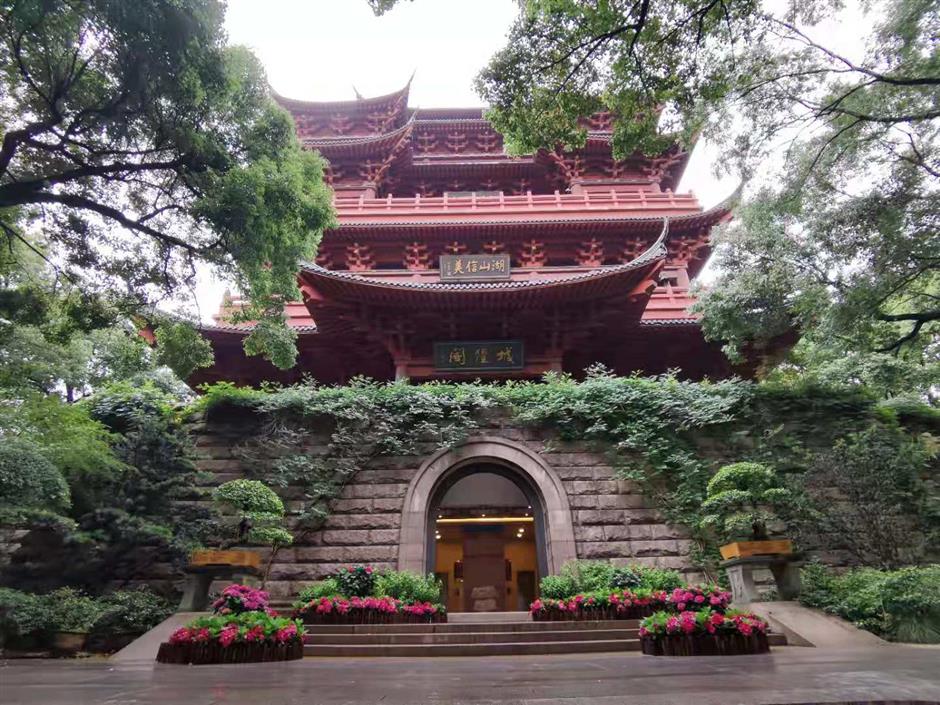 Chenghuang Pavilion is considered the best spot to view the city's panorama.

Farther along the hill path is Ruangong Pavilion, built during the Qing Dynasty to commemorate Ruan Yuan, a poet, calligrapher and imperial official.

When Ruan was designated the governor of Zhejiang area, he greatly improved people's wellbeing and enhanced their living standards.

The pavilion testifies to locals' admiration for him.

The path ends in Sanmao Pavilion, a Taoist temple that was swarmed with devout believers during the Southern Song Dynasty (1127-1279). In addition, the Ming Dynasty patriotic official and scholar Yu Qian lived in the pavilion during his teenage years.

In 2008, archeologists were called in to comb through the pavilion's relics. Local authorities then repaired it as a memorial hall for Yu.

﻿
Special Reports
﻿
61761
,
Hydrangea summer ritual in blossom in Hangzhou
Old mansion's delicate woodcarving exemplifies the passing of an era
Shanghai has an island? Yes, and it's the perfect weekend getaway!
It's time for tea at the Du Family Residence
Just an hour from the city center, the graceful elder sister …
Xinjiang travel vlog: Andy checks out the capital city, Urumqi
Xinjiang travel vlog: Andy checks out the ancient city of Kashgar
Obscurity lends magical charm to an old villa garden
Restored admiration for Zhu family in Songjiang
An island park so close to downtown but still obscure
EXPLORE SHINE