At first glance, Ninghai County looks pretty much like the rest of the eastern region of neighboring Zhejiang Province – steep hills and lakes dotted here and there.

Hundreds of thousands of years ago, some of the area was covered by active volcanoes that transformed the landscape. Flowing lava turned into chilled magma that formed grotesque-shaped rocks, technically called "columnar jointing." They resemble stone pillars squeezing together.

Amid all this, several villages that have existed for hundreds of years reflect the geological forces.

One of them is Xujiashan Village. Unlike houses in ancient Chinese villages that are mostly built of wood, brick or clay, those in Xujiashan are all built of local stone. Tourist brochures call it a "stone village."

Most of the stones used to build the villages are a copper color. The locals call them "bronze slates." The stones are assembled into houses, bridges, roads, benches and gardens, without any paint or additional décor.

Xujiashan looks like something out of the pixel-style video game "Minecraft." Because of its special appearance, it was selected in 2018 as one of the 10 most beautiful villages in Ningbo, the administrative jurisdiction of Ninghai. 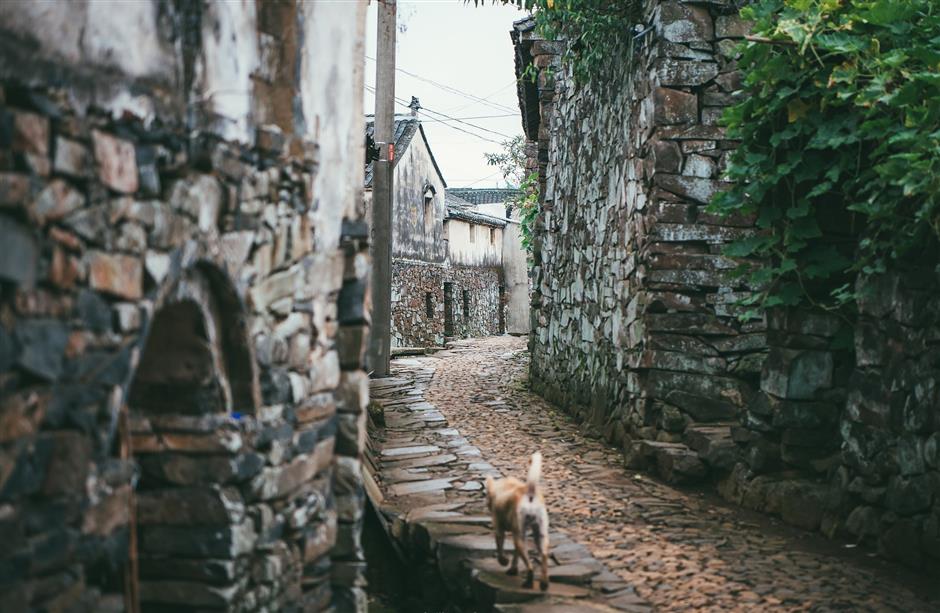 Near the village sits an old, abandoned quarry where ancient villagers found the basalt rocks for building.

When naturalist and author Zhang Haihua visited Xujiashan, he tried to climb into the quarry, wearing a safety helmet. It's not a recommended pursuit because of possible hidden hazards.

"Its entrance is now covered in weeds and stones," Zhang said. "I pushed aside branches of wild roses and climbed onto the rocks. I could see stone pillars, with cross sections in the shapes of pentagons or hexagons, gathered together like huge trunks. I realized then that if a rock fell on my head, a helmet would be useless."

Before tourism was developed in Xujiashan about a decade ago, most of the young people in the village left to seek opportunities in bigger cities. The elderly left behind continued to work the land, raising poultry, tea, peanuts and sweet potatoes.

"We have kept a lot of traditional customs in the village, such as bamboo weaving and the pounding of rice cake dough – things that modern people don't usually do," said Zhang Dewan, who now operates a restaurant in the village. "We don't do them as a stunt to attract visitors; they are simply part of our lifestyle."

The advent of tourism promotion hasn't changed the village much, except that a few families have turned their houses into inns or restaurants. The houses, however, haven't been tarted up. They look as they originally did about a century ago. 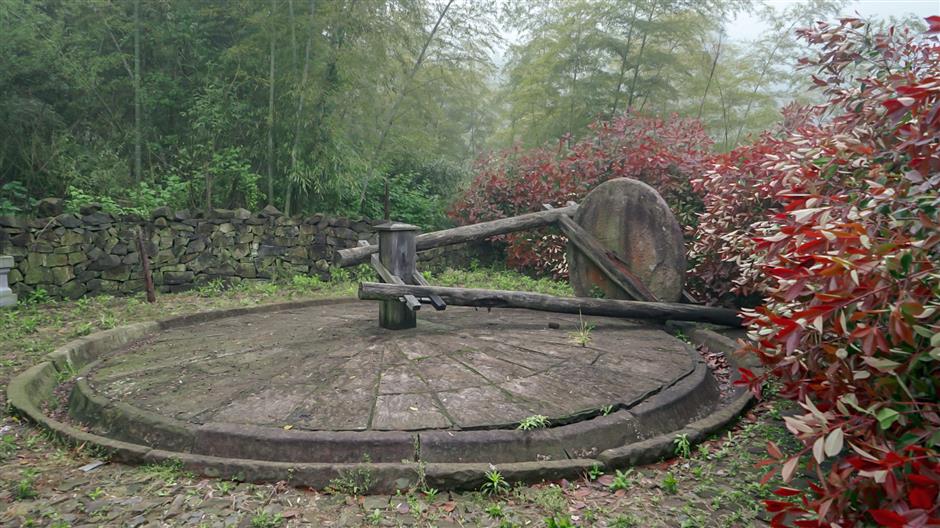 The ruins of an old stone mill

Although the name of the village literally translates as "Xu's Mountain," one of the landmarks in the village is named Ye's Ancestor Hall. Most villagers are descendants of the Ye clans.

The ancestry hall has two side walls built of stone, with other structures of wood. Thick ivy covers the entire stone walls and part of the roof tiles, and on old, crumbling columns.

The memorial tablets of Ye's ancestors, however, are well protected and worshiped in the center of the hall.

The genealogy of the Ye family shows that one of its earliest ancestors was Ye Mengding (1200-79), a chancellor during the late Southern Song Dynasty (1127-1279). The old records show that family members settled in the area to escape the Mongolian army that was invading China.

There are many legends about the Ninghai-born chancellor, who was in power during one of the most turbulent eras in Chinese history.

During his tenure, the Southern Song Dynasty reached a point where its very existence was at stake. The Mongolian army was approaching, and the imperial court was riddled with corruption.

Ye refused to collaborate with corrupt ministers and tried his best to advise Emperor Duzong on the best course, but his words fell on deaf ears. In disappointment, he resigned from office and lived in seclusion.

When the emperor tried to coax him to return to the royal court, he refused but wrote a note to Duzong, advising him to "manage his officials and love his people."

The first year after Duzong died, the Mongolian army conquered the Southern Song capital of Lin'an, which is today Hangzhou. The new Emperor Gong was kidnapped and a prince took over the throne further south in what is today Fujian Province.

Ye, then in his 70s, was again implored to return, and this time he accepted. However, the Mongolian army was hunting down Southern Song officials, and Ye couldn't pass through the army's checkpoint. He went home, broke down and cried, and died soon after. His son Ye Daqing led the clan to Xujiashan, where they escaped the turmoil.

The village's heyday as a commercial hub disappeared a long time ago, but generations of residents have sought to keep what's left of the village alive.

Nearby villages haven't been so lucky.

Datangshan Village, which sits on a volcanic crater, now has fewer than 20 families left. Many residents have relocated to New Datangshan Village on the mountain slopes, about 3 kilometers away.

Eons earlier, magma cooled down to form a thick, flat layer of rock covering the crater. Weathering broke down the rock into rich, agricultural soil.

When Zhang Haihua visited old Datangshan Village, he found a stunning view of a landscape riddled with rocks at the edge of the almost empty village.

"I wish that the land will never be commercially exploited," Zhang said. "It's best for it to remain as is, or else its natural, primitive view will be ruined."

Like Xujiashan, Datangshan is full of stone houses but they are shabbier than those of its neighbor. Zhang, however, found the "dilapidated walls and houses" beautiful.

A stone bench stands at the entrance, which is a rock archway. A plum tree, probably planted before most villagers left, still blooms in the early summer. Many houses have collapsed, exposing their foundations. The area resembles an ancient ruin.

"I walked further into the village and suddenly saw wild fruit hanging heavily on small branches," Zhang said. "The roots were on the inner side of a stone wall and small twigs on the top peeked out from behind. The fruits were still green, but I bet they will ripen and turn red in just half a month."

In the center of the village lies a piece of farmland now filled with wild flowers and grasses. The occasional sound of a chicken or dog pierces the silence.

If this is the end of a village, then it has ended well. 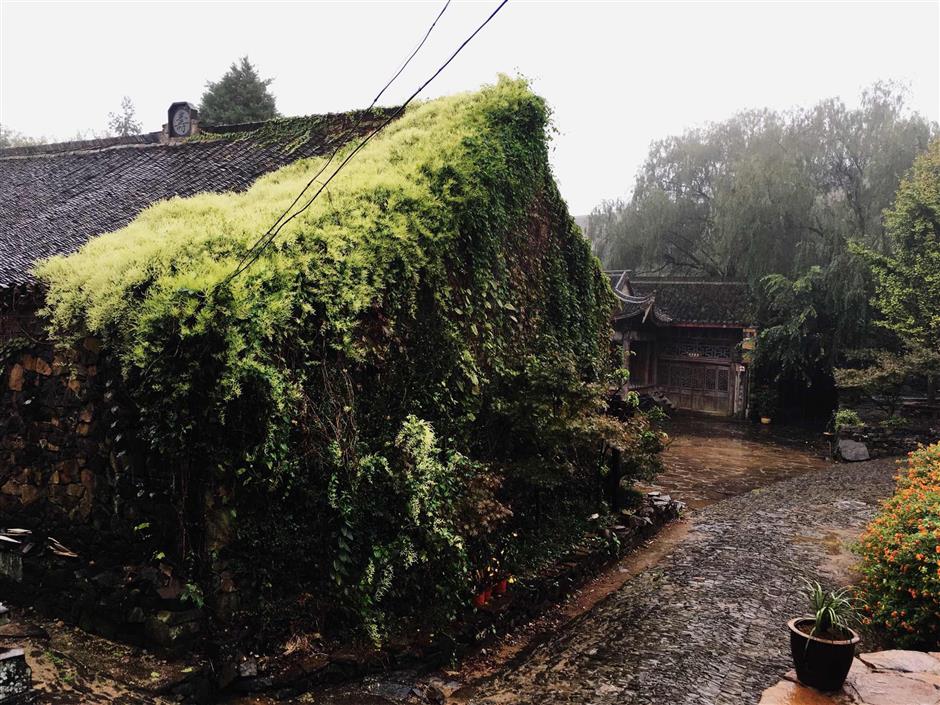 The Ye's Ancestor Hall is almost hidden by thick ivy.