Our prehistoric predecessors: They fascinate us, they scare us

Modern mankind still has endless questions about dinosaurs amid enduring curiosity about what the world must have looked like when the behemoths walked the earth.

The popular imagination about dinosaurs, which first got whipped up in Victorian England, has been fed by movies, literature, cartoons, children's toys and theme parks.

Museums with dinosaur collections are numerous in the world, but one in southwest China's Sichuan Province has been singled out as a must-see by CNN Travel.

It's called the Zigong Dinosaur Museum, and is one of the three largest of its kind in the world and the first specialized dinosaur museum to open in China.

There are more than 40 sites around the city of Zigong, once known for its ancient salt production, where dinosaur remains have been found from different time periods.

The museum sits atop a fossil site called Dashanpu. It's 11 kilometers away from downtown Zigong.

Founded in 1984, the museum is extremely popular with residents of Sichuan and the neighboring megacity of Chongqing. It welcomed more than 100,000 visitors during the National Day holiday last year.

However, the museum and Zigong itself are not usually included in standard sightseeing itineraries to Sichuan.

That really is unfortunate because the museum is certainly worth a visit.

Its collection contains fossils of all the species of dinosaurs found around the world, but most of its exhibits were unearthed locally.

Sitting right atop a "dinosaur cemetery," the museum collects fossils of all the known species of dinosaurs around the world, but most of its exhibits were unearthed locally.

During the Jurassic era about 201 million years ago, Zigong was a prehistoric paradise. It was located near a large lake. The climate was tropical and humid, making it a perfect environment for extensive plant life – the diet of sauropods, also known as "lizard-footed" dinosaurs. Up the food chain, carnivorous theropods, or "beast-like dinosaurs," preyed on other animals. Their distant cousins, the pterosaurs, flew through the skies.

The Dashanpu area was a sand shoal. The dinosaurs that died there were quickly buried by mud and sand on the shoal. Over millions of years in this dinosaur cemetery, bones turned to fossils.

The history of finding dinosaur fossils in Zigong dates back to early last century, when American geologist Lauder Burke began an investigation in the area. On a sandstone cliff, he found something that looked like a tooth fossil. He gently brushed away the sandstone around the fossil and discovered a thigh bone-shaped fossil about 30 centimeters long and 20 centimeters wide. He believed it was the remains of a dinosaur skeleton.

The hunt for dinosaur fossils in Zigong somehow stopped until the 1970s. More fossils were discovered in 1972, but it wasn't until 1977 that the complete skeleton of a sauropod was unearthed.

Two years later, when workers were building a parking lot in Dashanpu, they reported finding "dragon bones" underground. Over the next several years, more than 10 tons of dinosaur fossils were unearthed around the construction site. 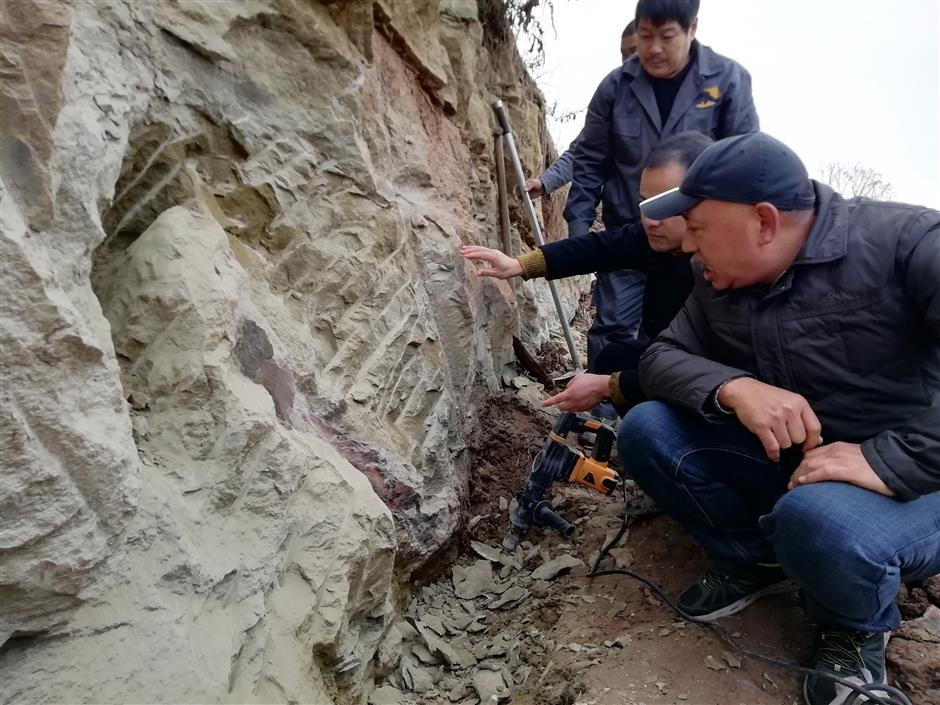 Dinosaur fossils are so prevalent in the area of Zigong that walkers found new specimens last year, triggering another round of excavation.

The museum is divided into three main exhibitions. One introduces basic knowledge about fossils, geologic periods and the evolution of dinosaurs.

A second is devoted to dinosaurs from the Zigong area. It includes a large open area where reconstructed fossil skeletons are exhibited.

The third area of the museum, called the Fossil Burial Hall, is the actual site of the dinosaur fossils. From a large viewing space, visitors can look down one of the largest fossil burial sites in the world, with thousands of dinosaur fossils in their original setting.

Some of the dinosaur skeletons reconstructed in the museum are unique in the world.

The skeleton tells us that Huayangosaurus taibaii was about 4.3 meters long. It had a large, triangular head and a relatively short neck. Its front legs were distinctly shorter than its rear ones, but the animal could still walk with all four legs on the ground. And like the stegosaurus, Huayangosaurus taibaii had rows of spikes and plates on their backs. It's believed that they loved to linger around water and primarily ate juicy leaves.

Fossils of 12 Huayangosaurus taibaii were unearthed in Dashanpu; paleontologists have managed to restore the complete skeletons of two of them. One is displayed in the Zigong museum, the other is in the Chongqing Museum.

Another must-see skeleton fossil in the museum is the Yangchuanosaurus hepingensis – the one that most people identify as T-Rex. Although it does resemble the prime star of the "Jurassic Park" movie series, it actually belongs to a different but related species. 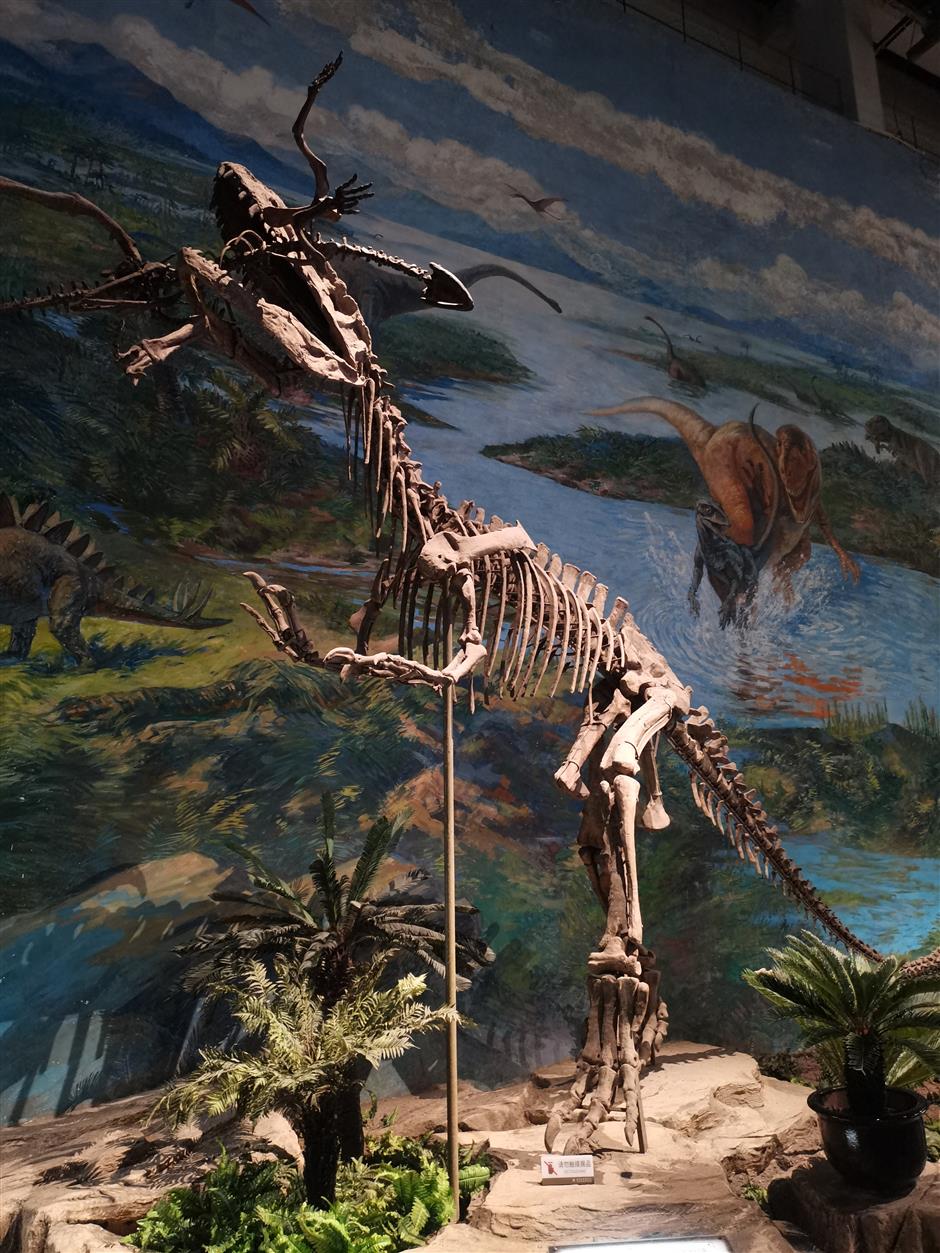 The fossilized skeleton of a Yangchuanosaurus hepingensis (above) and skull (below) are displayed in the museum. 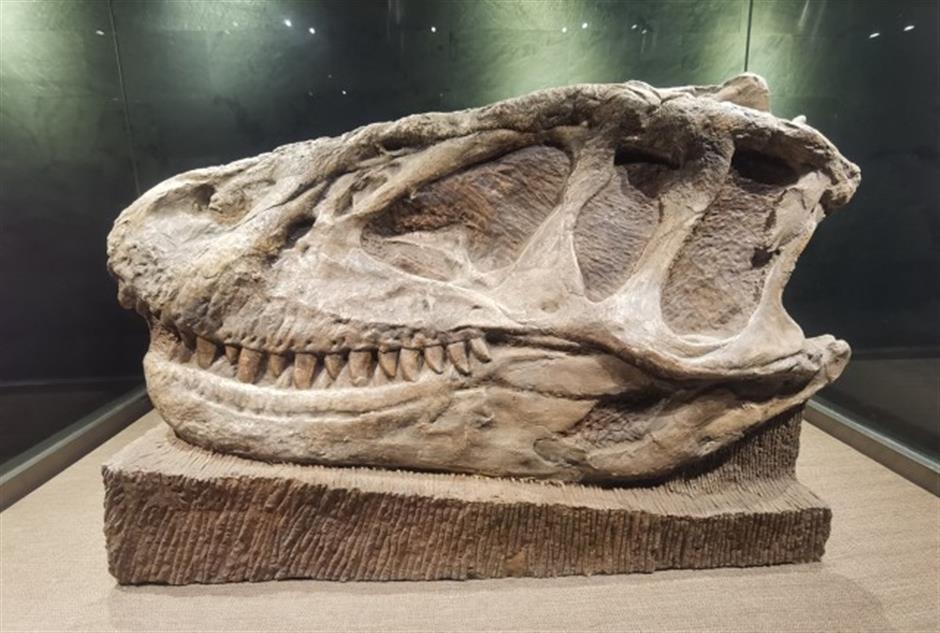 Some believe that Yangchuanosaurus might have been fiercer than Tyrannosaurus rex, but we will never know because they lived in different eras.

The skeleton displayed in the museum shows an 8.5-meter-long carnivore with a gigantic huge head and sharp teeth. Standing upright, the dinosaur would have been 9 meters tall.

Like T-Rex, Yangchuanosaurus had very short front legs that didn't reach the ground, but its rear legs were powerful enough to propel the creature at fast speeds. There's little doubt that smaller prey could not easily escape this predator.

But even the fiercest dinosaurs couldn't survive the calamity of a major asteroid hitting the earth – one of the most popular explanations for their sudden extinction.

The museum draws some parallels between the fragility of life then and now. It sponsors popular science projects to inform the public how to protect our modern environment and cherish its natural resources.

"The museum is quite old, and it's not big, but it is still an eye-opener for us even if we have been to many other museums that display dinosaur fossils," said a visitor named Yang Huishan, mother of a 5-year-old boy. "And Zigong apparently has developed its own dinosaur culture. It's fun seeing very vivid dinosaur sculptures here and there on the street."

The museum is part of the Zigong UNESCO Geopark, established in 2008 by the United Nations agency. In addition to the dinosaur museum, the park also includes the Salt Industry History Museum and the Chinese Lantern Museum.