A resident takes pictures of the wanghong osmanthus tree in Hangzhou Children's Park.

The wanghong (Internet celebrity) osmanthus tree in Hangzhou Children's Park started to bloom on August 19, much later than previous years due to recent typhoons and heavy rainfalls.

As the harbinger of the coming osmanthus season, the tree has for many years been the first to bloom in the city.

It is located on the southwest side of the park and is clearly signposted. By virtue of its sweet aroma, it has already attracted tourists to take a snap.

As the weather started to cool down, more than 3,000 osmanthus trees in the park are expected to flower in September.

In addition to the park, the nearby Manjuelong Village is also an ideal place to view and admire osmanthus. There are more than 7,000 trees along the various mountain paths.

In 1984, Sweet Osmanthus Rain at Manjuelong Village was named as one of the "10 new must-see scenes at West Lake."

The osmanthus was designated as the city flower of Hangzhou in 1983, and residents generally have a deep appreciation for its blooms. 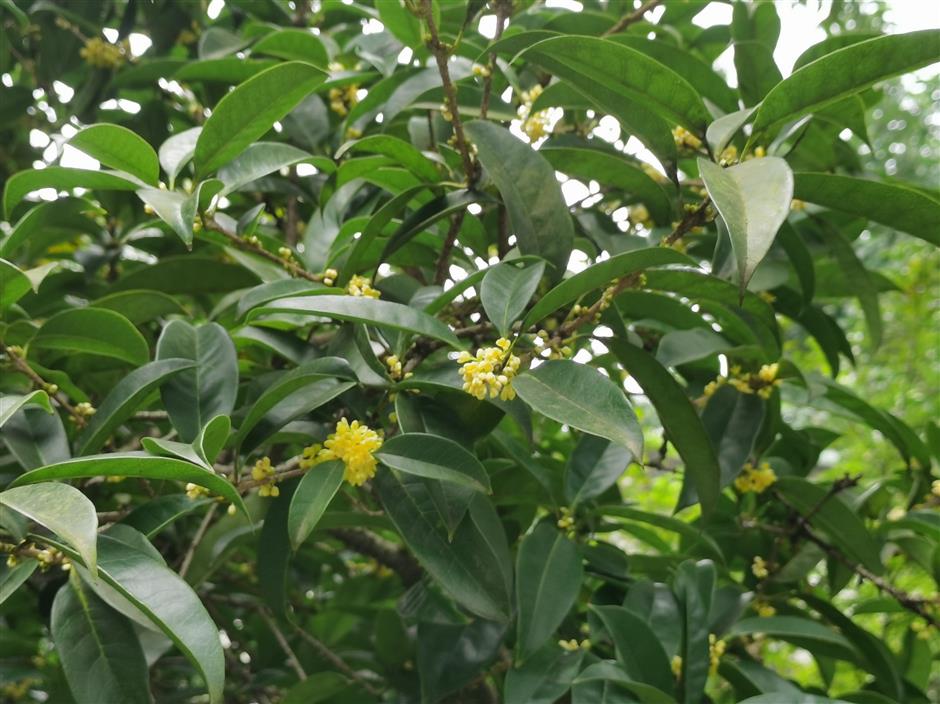 The gold osmanthus starts blooming with a charming smell, which wins people's affection.

The city has a long history of growing osmanthus. Tang Dynasty (AD 618-907) poet Bai Juyi (AD 772-846) once wrote a poem about a picturesque scene of golden flowers and his hopes of returning to Hangzhou to gaze upon blooming osmanthus once again.

Little did he know that his poem would have attracted cavalcades of tourists to Hangzhou every autumn as they also seek the fragrant flowers.

The peak time to enjoy the flowers is usually between late September and early October. During that period, hundreds of locals swarm to the valleys and hills surrounding the West Lake to enjoy weekend while breathing in the sweet scent of osmanthus.

There are three types of osmanthus most commonly seen in Hangzhou. The gold and silver osmanthus are easily identified by their colors, but the gold variety is much more fragrant. Since the full-blossom period only lasts for a short period in the autumn, it's best to enjoy them around the solar term of the Autumn Equinox, or qiufen, which falls on September 23 this year.

Chinese people believe the yang (hot) energy begins to decline and the yin (cold) energy starts to rise in nature and human bodies around the solar term.

The osmanthus has been taken as a nourishing tonic, and locals have created various dishes integrated with the flowers. These tasty dishes are available at the restaurants around Manjuelong.